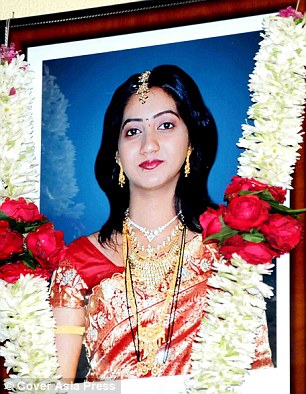 A tragic loss: Savita’s parents have installed a shrine to her in their home, in accordance with Hindu tradition

The parents of an Indian woman who died of blood poisoning after Irish doctors refused her an abortion have met officials to demand justice for their daughter.

Savita Halappanavar, 31, was 17 weeks pregnant when she began miscarrying, and died of septicaemia a week later.

Her husband Praveen Halappanavar, 34, has told how he begged doctors at Galway University Hospital to terminate the pregnancy, but they refused to do so because she was ‘in a Catholic country’ and the foetus’s heartbeat was still present.

The tragedy has provoked soul searching in the Republic of Ireland, where abortion is illegal, as well as considerable anger in some quarters.

Campaigners are demanding a change in the law to allow abortion in the case where the mother’s life is in danger.

Mr Kumar said of the encounter: ‘I visited the house and offered our government’s help where possible.’ 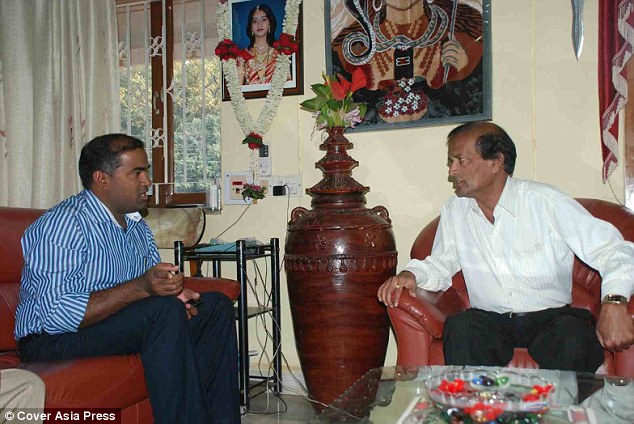 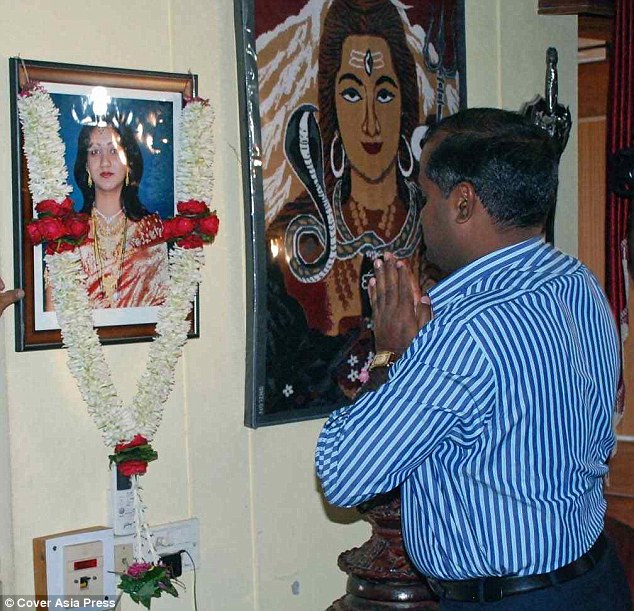 Paying respects: The deputy commissioner paused for a moment of reflection before Savita’s shrine 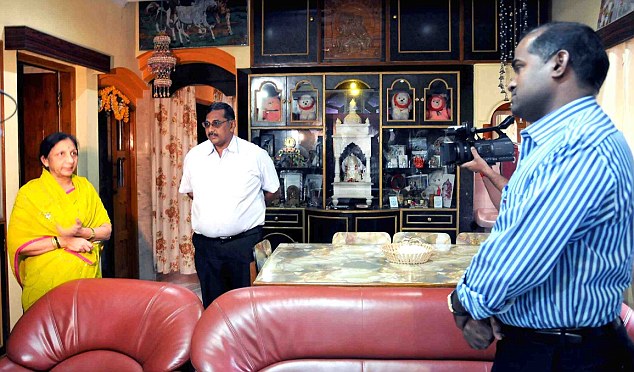 Savita’s mother, left, had asked her daughter to return to Belgaum to give birth, but Savita felt she would be safer in Ireland

A photo of Savita now hangs in the family home covered in a garland, as is traditional in India’s Hindu community after the death of a loved one.

Echoing comments made by her parents, India’s ambassador to Ireland said today that Mrs Halappanavar might still be alive today if she had been treated in India.

Debashish Chakravarti told RTÉ radio that he hoped the Irish government would take steps to ensure the circumstances which led to her death never arose again.

Abortion is not illegal in India when the mother’s life is at risk, the ambassador noted.

Meanwhile Ireland’s ambassador to India, Feilim McLaughlin, was officially summoned by the Delhi government on Friday to discuss an inquiry into Mrs Halappanavar’s death.

Madhusudan Ganapathi, secretary (west) in the external affairs ministry, told the Irish envoy he hoped the inquiry into the tragedy would be independent.

He also conveyed the sadness felt by people in India as ‘a young life had come to an untimely end’. 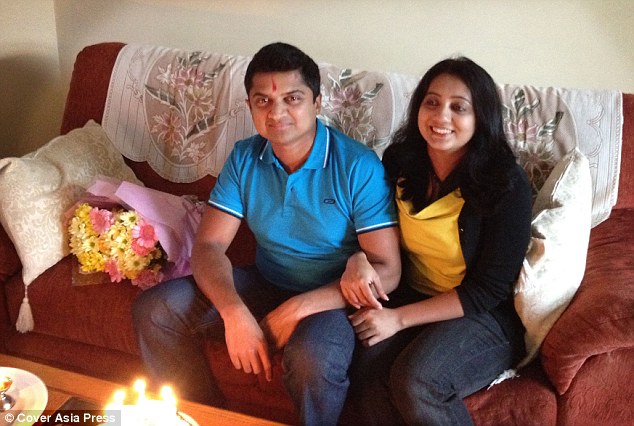 Devastated: Praveen Halappanavar (pictured with his wife Savita at their home in Galway) says he watched helplessly as she died from blood poisoning from a miscarriage after doctors refused to perform an abortion 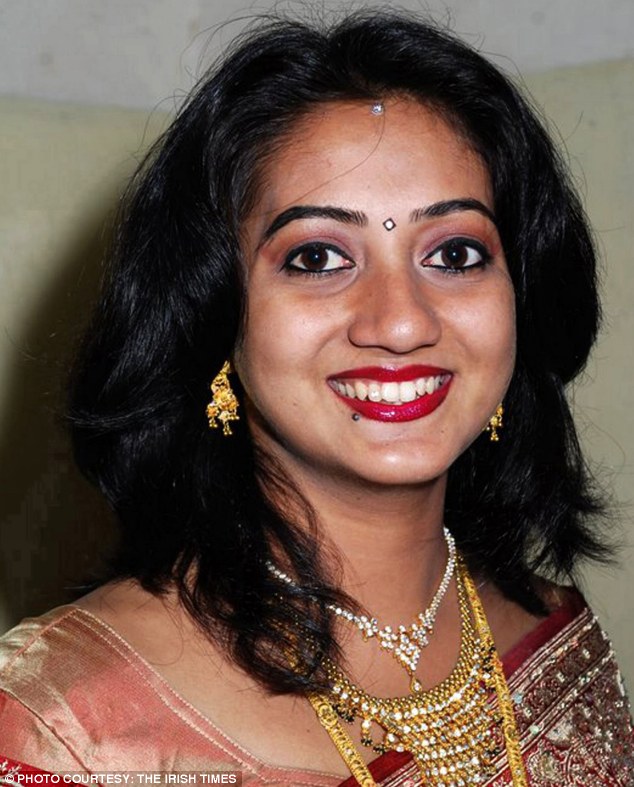 Savita Halappanavar, 31, died at Galway University Hospital, where doctors refused to perform a medical termination because she was ‘in a Catholic country’ and the foetus’s heartbeat was still present

Mr Halappanavar, Savita’s husband, has described how he held her hand as she died.

Reliving her final moments, he said: ‘In the night, at around one o’clock, the nurse came running, as I was standing outside ICU.

‘She just told me to be brave, and she took me near Savita, and she said: “Will you be OK to be there, living her last minutes?

‘I said: “Yes, I want to”. I was holding her hand, they were trying to pump her heart, there was a big team around. The doctor just told me they lost her.’

Mr Halappanavar, who works as an engineer at Boston Scientific in Galway, came to Ireland from India with his wife four years ago to start a new life together. She had a job in Westport, Co Mayo and the pair lived in Galway city. 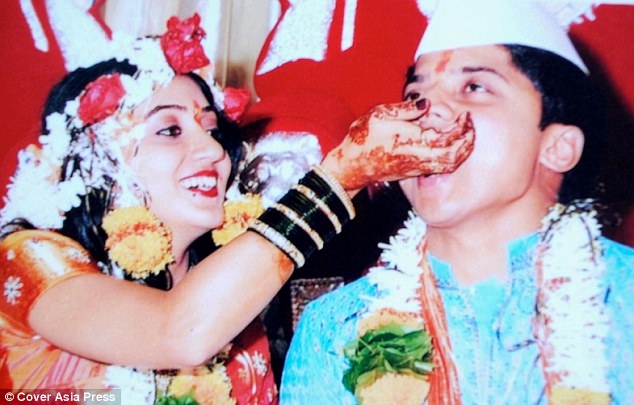 Public outcry: The tragedy has provoked a huge amount of soul searching in the Republic of Ireland, where campaigners are demanding a change in the law to allow abortions when the mother’s life is in danger 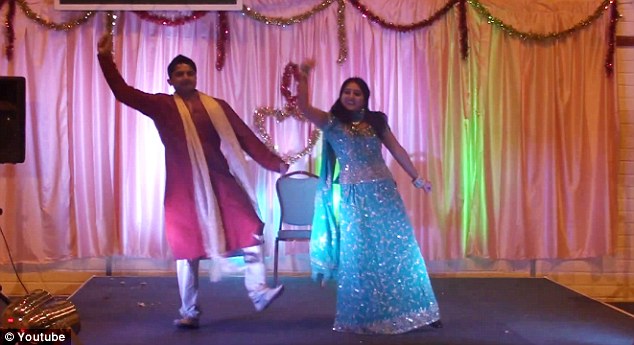 Happy couple: Savita and her husband Praveen dancing at 2010 Diwali festival in Galway, video from YouTube

They were so excited about the expected birth of their first child, which was due on March 20, that they had an early baby shower in recent weeks when Mrs Halappanavar’s parents were visiting.

Pro-choice activists in Ireland have turned to social media networks to organise a mass protest against the country’s abortion laws on Saturday.

A rally in central Dublin is expected to attract several thousand demonstrators, and follows similar rallies on Thursday night in Belfast and on Friday in Derry.

Looking for someone to hang out with: Parents peg details of their children on a washing line in bid to find them a partner