The footage, filmed in a courtroom in Moscow, shows citizens applauding an opposition councillor and lawyer as he is handed a draconian seven-year sentence for daring to oppose the military conflict. 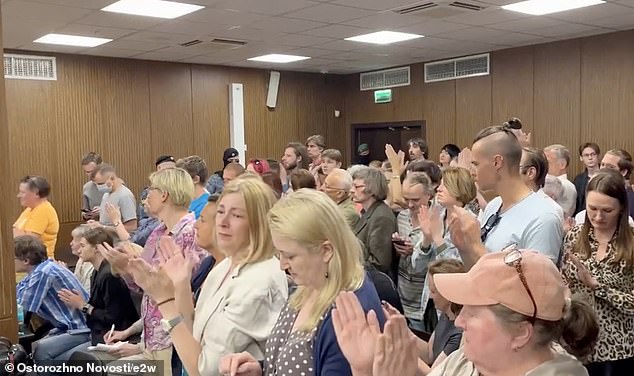 Gorinov said ‘many of my fellow citizens feel shame and guilt’ over conflict in Ukraine. This sentiment is clearly shared as defiant Russians stand and applaud him as he is sentenced 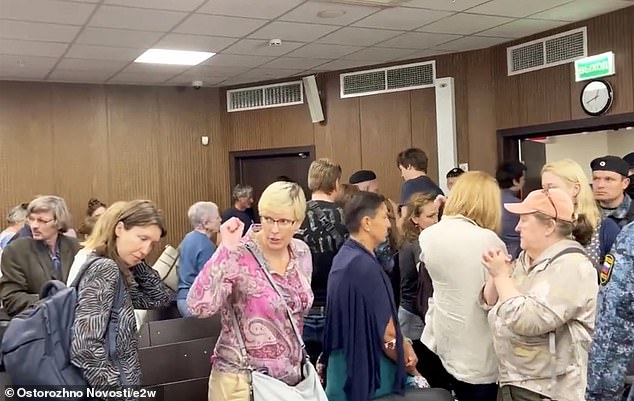 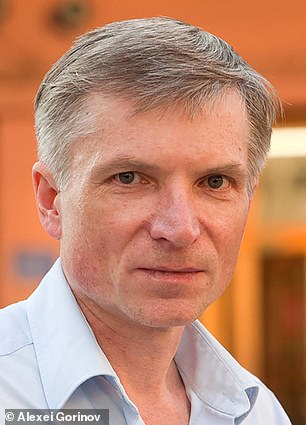 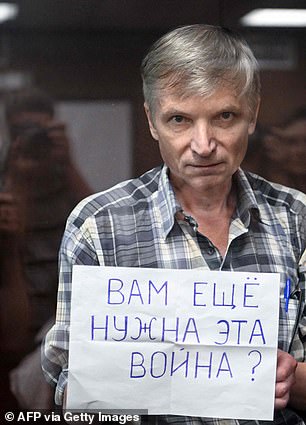 He and another councillor were on trial for demanding in March a halt to war.

Today in court he warned of a return to Stalin times while doubling down on his call for an end to Putin’s war.

‘I believe all efforts of [Russian] civil society should be aimed only at stopping the war and withdrawing Russian troops from the territory of Ukraine,’ he had said in March, in comments which landed him in court.

He protested vocally about children dying in the war.

He has been detained ever since but repeated his objections to the war as he was in the dock in Moscow’s Meshchansky District Court.

Yet the reaction of people in the crowded public seats in the court – supporting Gorinov – is one of the most striking displays of dissent by Russians during the war.

The are watched by armed OMON troops who are unable to stop the protest.

As he was sentenced in his glass cage, he held up a sign that read ‘Do you still need this war?’

Human rights groups fear he will be the first of many Russians to be locked up simply for voicing their objections to a war which has killed tens of thousands on both sides.

They are accused of spreading ‘false information’ about the war.

In his closing statement, the councillor said: ‘War, whatever synonym you call it, is the last, dirtiest, vile thing, unworthy of the title of a man.’

He said: ‘I thought that Russia had exhausted its limit on wars back in the 20th century. 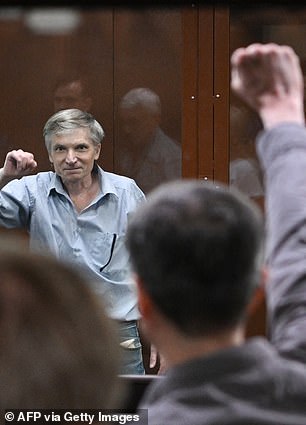 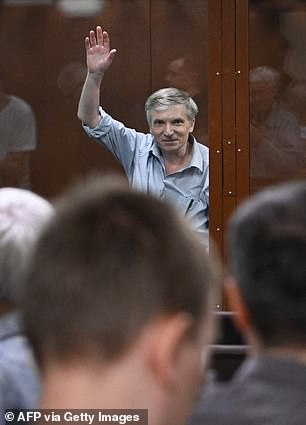 Gorinov stands and gestures defiantly from glass cage as he condemns war in Ukraine in his closing statement. He said he hopes to become the Russian ambassador to Ukraine someday in the future 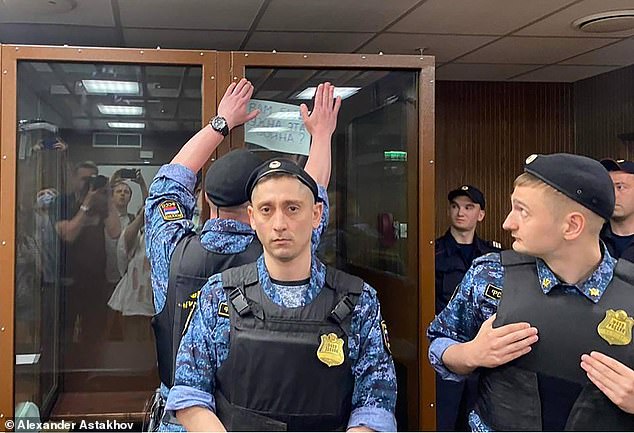 Guard attempts to block out message as Gorinov holds up anti-war sign from within glass cage in Moscow courtroom. Members of the public then stand and applaud as Gorinov is given a seven year sentence

‘However, our present is Bucha, Irpin, and Hostomel.

‘Do these names mean something to you?

‘You, the accusers – take an interest and do not say later that you did not know anything.’

He told the court: ‘I am convinced of this: war is the fastest means of dehumanisation, when the line between good and evil is blurred.

‘It is always death. I don’t accept it and reject it.’

In his courtroom speech he mocked Putin declaring: ‘For five months, Russia has been conducting hostilities on the territory of a neighbouring state, misleadingly calling it a ‘special military operation.’

‘We are promised victory and glory.

‘Why, then, do so many of my fellow citizens feel shame and guilt? Why did many people leave Russia and continue to leave? And why did our country suddenly have so many enemies?’

He said he had a constitutional right to express his opinion which was being overturned by the jail sentence.

‘During the years of Stalinist terror, my grandfather was accused of calling for the overthrow of the Soviet system, in the creation and strengthening of which he participated in the most direct way,’ he said.

He lived to be rehabilitated half a century later.

‘I hope my recovery will take much less time,’ he said.

‘But for now, I’m here in the courtroom.

‘My criminal case is one of the first to be heard, but hundreds of such cases have been initiated in Russia against my fellow citizens who think and speak out about what is happening.’

The Russian authorities were ‘destroying families, breaking the lives of young people’.

And speaking here, I speak for all of them who have not yet been brought to justice.

He had manned the barricades when the USSR fell, supporting democracy.

‘If they had said then that in 30 years I would be tried by a criminal court for my words, for my opinion, I would not have believed it,’ he said.

‘In the meantime, I wish prudence to our government,’ he said.

‘I wish wisdom to the judges.

‘I wish steadfastness to all who are subjected to a new wave of repressions, as well as to the entire Ukrainian people.

‘For myself I wish one day to become a future Russian Ambassador to Ukraine.’

One supporter Dmitry Fyodorov, 50, programmer, said that the charges against Gorinov were ‘unlawful’.

He was a ‘kind man and a good lawyer.’

The other accused Elena Kotenochkina was tried in absentia after she left Russia.

'Wizz Air cancelled my flight - no support to get me home': Flyer's fury at Hungarian airline