The tennis star, 23, who still lives in the Russian capital, has managed to dodge the ban by switching her allegiance and faced Tunisia’s Ons Jabeur in Saturday’s final on Centre Court.

Rybakina rallied from a set down to deny Jabeur her own slice of history with a 3-6 6-2 6-2 victory over the Tunisian world No.2 in Saturday’s showdown at the All England Club.

The 23-year-old Rybakina is also the youngest women’s Wimbledon champion since Petra Kvitova in 2011 after reducing Jabeur to a frustrated wreck during the one-hour, 48-minute title decider.

Her semi-final victory had been cheered by Russian-media – ‘Russian-born star storms into Wimbledon final,’ cheered the front page of the Russia Today website.

However four years ago Rybakina decided to represent Kazakhstan in tournaments – and she appears to be fed up of questions about Russia.

Speaking after her sensational win against World No 1 Halep in the semi-finals, she said: ‘I’m playing for Kazakhstan for a long time. I’m really happy representing Kazakhstan.’ 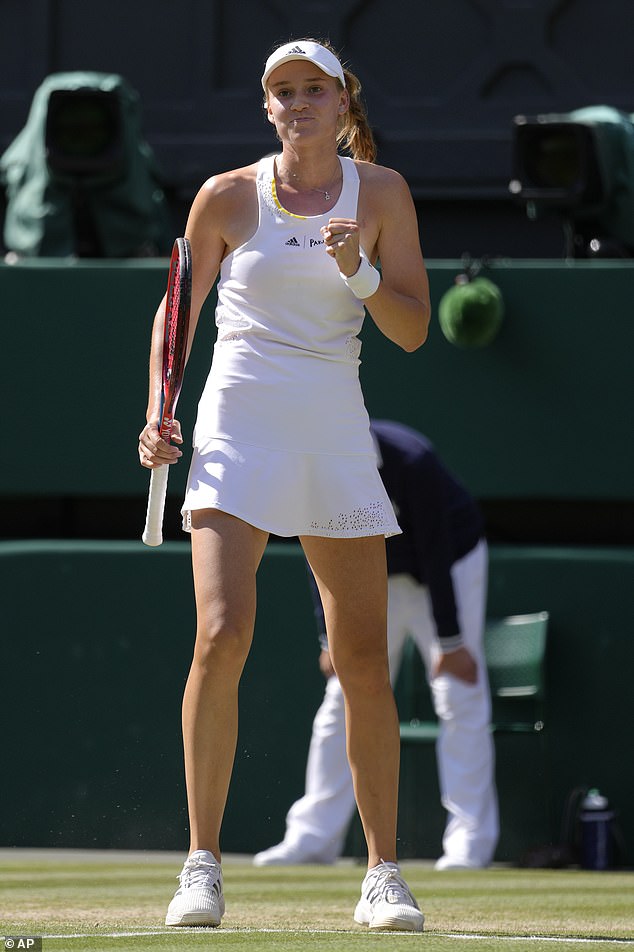 Elena Rybakina, 23, who was born and lives in Moscow, has been able to enter this year’s Wimbledon Championships after switching her allegiance to represent Kazakhstan in 2018 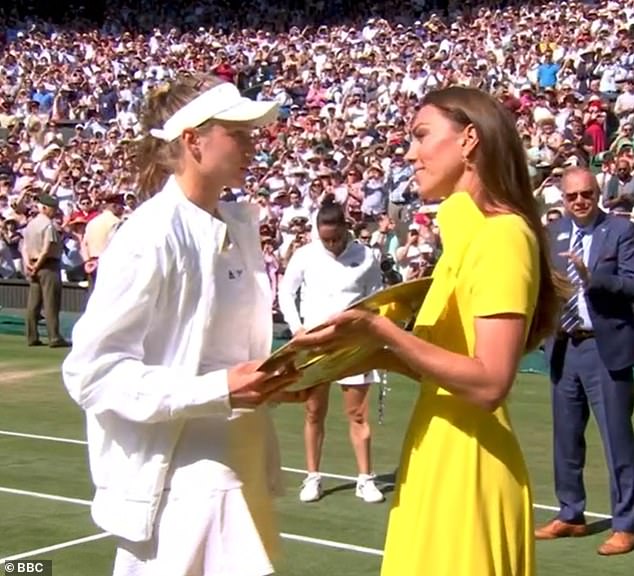 Though she was widely regarded as the underdog in the competition, she won in two stunning sets, with the score 4-6, 6-2, 6-2. She was presented with the trophy by Kate Middleton 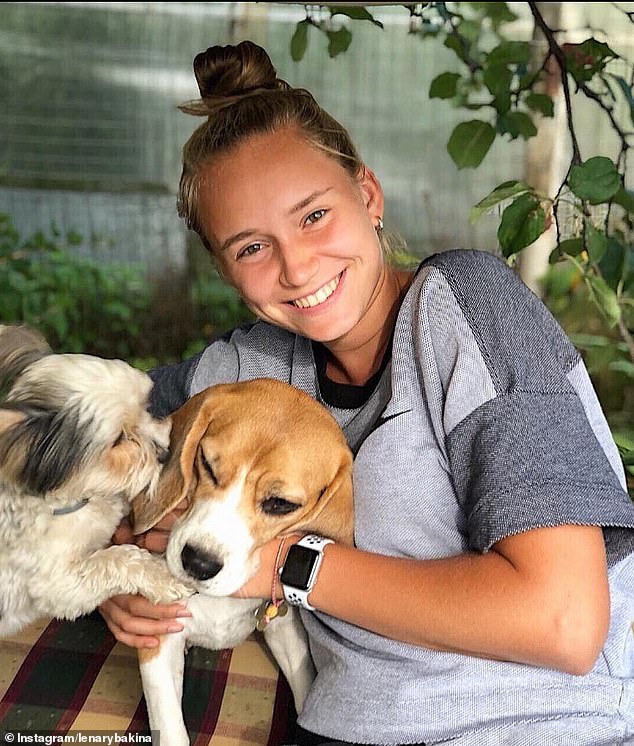 Puppy love! The star appears to be a dog lover and has posted photos of herself cuddling pooches on Instagram

‘They believed in me. There is no more question about how I feel. It’s already a long time my journey as a Kazakh player.’

Born in Moscow in 1999, Rybakina has been into sports from a young age and used to compete in several different sports with her sister.

Her groundstrokes are penetrative and she moves with a grace born of those childhood pursuits.

The 23-year-old was a gymnast and figure skater as a child but was told she was too tall to have a future in either sport. 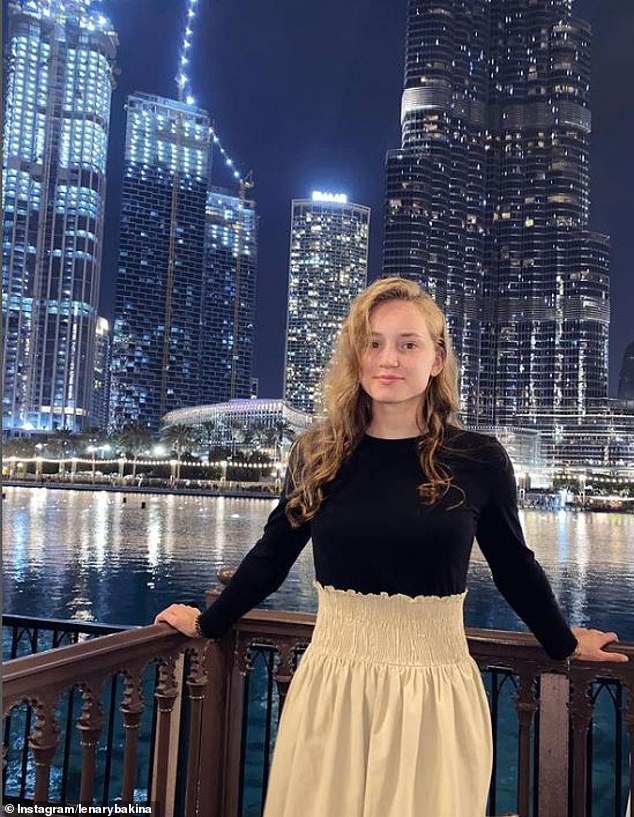 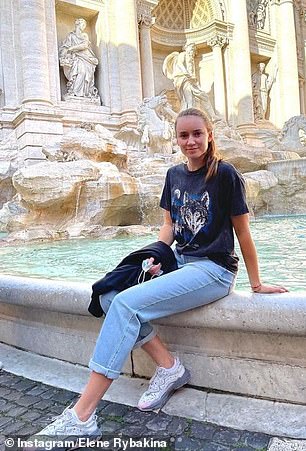 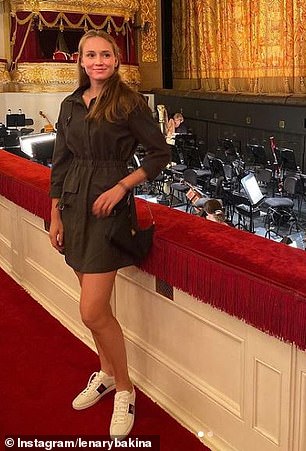 So she turned her hand to her father’s favourite sport, tennis.

She first picked up a racquet at the age of six and showed a natural flair for the sport.

By the age of 15 she played her first match on the International Tennis Federation circuit in Turkey and turned professional two years later.

Rybakina’s first ever Grand Slam at the age of 20 saw her crash out in the first round of the French Open. But since then she has only continued to shine. 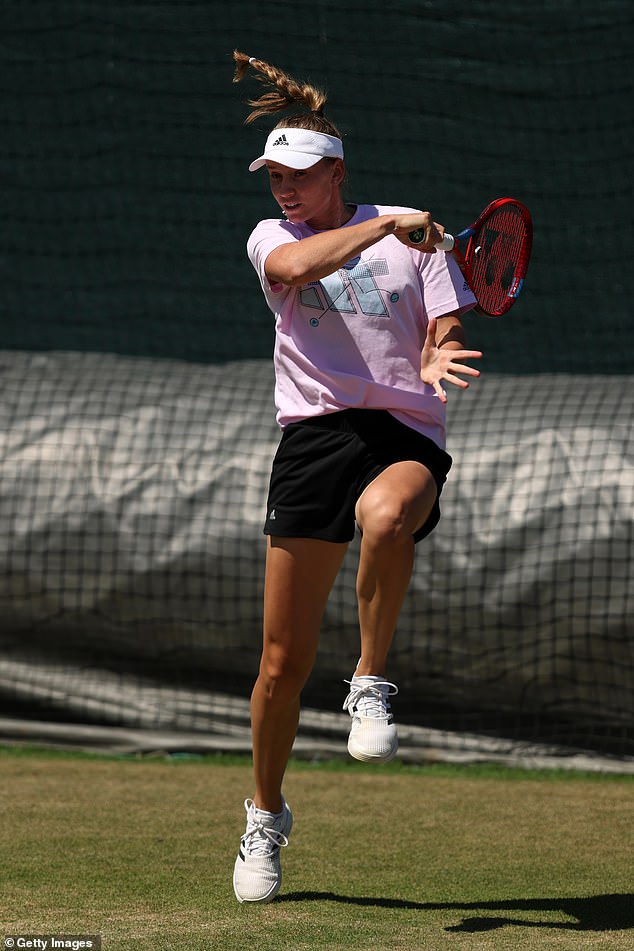 Wimbledon’s row with the international tennis authorities over their ban on Russian players has escalated with the British game hit by an extraordinary series of fines totalling $1million.

Earlier this month, Sportsmail learned that the WTA has secretly fined the Lawn Tennis Association and the All England Club £620,000 and £207,000 respectively as a punishment for excluding Russian and Belarusian players from the warm-up tournaments in Eastbourne, Nottingham and Birmingham.

The All England Club, who run Wimbledon, and the LTA are set to appeal with the backing of the British Government, who reacted angrily when informed of the fines.’Since February the vast majority of the international sporting community have come together in solidarity to condemn Putin’s barbaric actions in Ukraine,’ Culture Secretary Nadine Dorries told Sportsmail.

‘Regrettably the international tennis federations appear determined to be outcasts in this. The LTA and Wimbledon should be praised for their move to make Russia an international sporting pariah, and doing what is right in the current circumstances.’

In another worrying development for British tennis there are also concerns about the appeal process. Sportsmail learned that the WTA will only permit an appeal once the fine has been paid in full, leaving the British authorities no option but to shell out over £827,000 before they can mount their defence.

These concerns are compounded by the fact that the WTA board who will hear the appeal is chaired by WTA chief executive Steve Simon, who was responsible for issuing the original fine.

Wimbledon took a unilateral decision to ban the players following high-level talks with the Government who were concerned about handing a propaganda victory to Vladimir Putin’s regime.

It caused a major split in the tennis world with the ATP and WTA – the men’s and women’s tours – retaliating by removing ranking points from this year’s Championships.

Off-court Rybakina is fairly private, but she shares snippets of her personal life and behind-the-scenes on tour.

Seemingly a dog lover, the 23-year-old visited a dog shelter in November last year to meet some of the pooches up for adoption.

The rising star also posts photos of herself posing near world landmarks, such as the London Eye and the Eiffel Tower, in places she gets to visit on tour.

Despite being a private and low-key player, she has been court up in controversy during this year’s competition.

But having represented Kazakhstan since 2018, the 23-year-old is proud of her heritage.

She wrote: ‘For the first time the WTA 250 tournament will take place in Kazakhstan in a couple of weeks!

‘I am very happy about this event and would like to say a big thank you [to the Kazakhstan Tennis Federation].’

She added hosting the tournament was a great opportunity for the ‘development of tennis in the country’.

Responding to questions at a press conference on Thursday the World No. 23 would not reveal how much time she spends in Moscow.

However she said she primarily trains for tournaments in Slovakia and Dubai.

‘I don’t live anywhere, to be honest,’ she said.

Since then, she has tried to navigate difficult questions over whether she sees herself as Russian – of as Kazakh.

Ahead of the final, she said: ‘It’s a tough question to say what I feel.

‘I was born in Russia, but I am really happy that I’m representing Kazakhstan. They were looking for a player and I was looking for help.

‘I’m feeling the support of the people because I’m bringing results which are very good for the sport in Kazakhstan.’

Rybakina did admit she felt sorry for the Russians who were barred from competing at Wimbledon.

But when pressed on her thoughts on the country’s invasion of Ukraine, she said: ‘I just want the war to end as soon as possible.’

She is also Kazakhstan’s first ever finalist in a Grand Slam tournament.

But the Moscow-born star’s triumph was not without controversy as tennis great John McEnroe called her participation into question following the All England Club’s ban on Russian and Belarusian players because of Vladamir Putin’s war on Ukraine.

‘She is obviously a huge hitter and hits the ball great,’ McEnroe said from the BBC commentary booth. 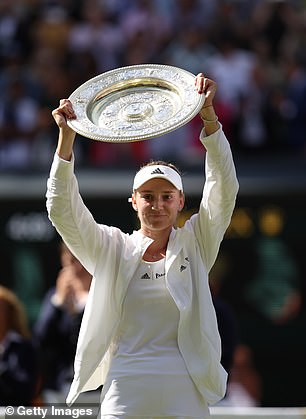 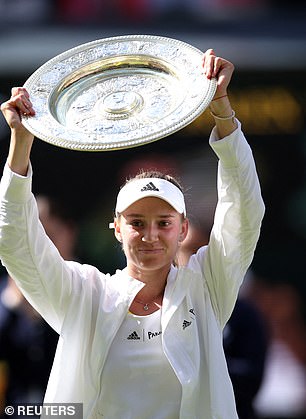 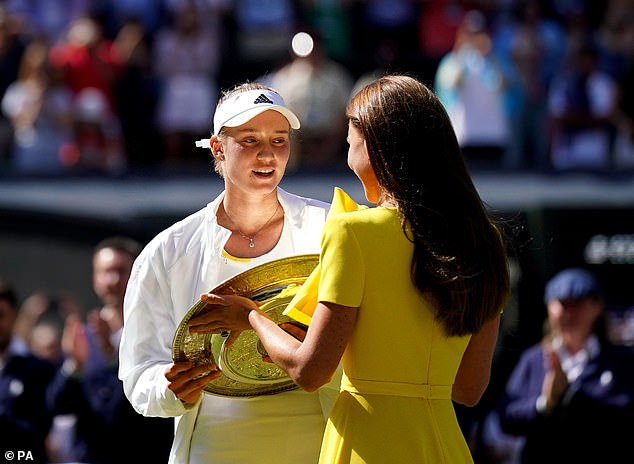 Kate presented the Venus Rosewater Dish on Centre Court this afternoon to Elena, exchanging a few words with the player 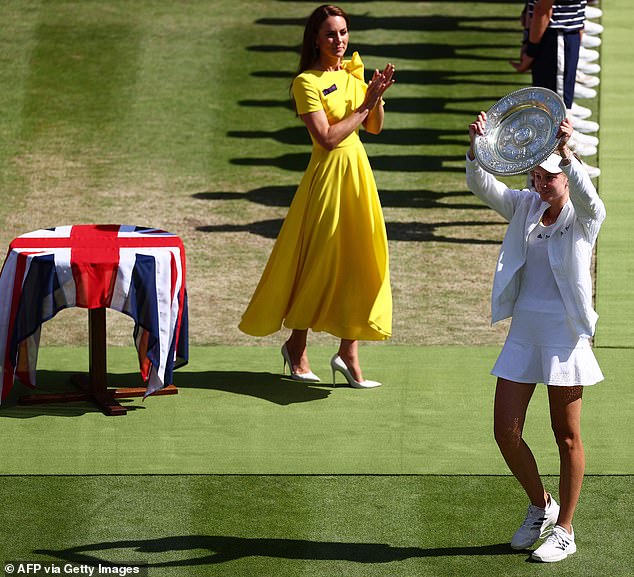 ‘I just think it’s weird because of this whole thing. I don’t mean to get into politics here but she is Russian, right?

‘It is sort of strange because of this whole ordeal of not allowing the Russians to play.’

While Russian men’s world No.1 Daniil Medvedev was among those unable to compete, Rybakina marched through the women’s title for the concession of just two sets.

Rybakina also dropped the opening set in her quarter-final against Australian Ajla Tomljanovic.

Jabeur had been bidding to become first African woman to win Wimbledon and first Arab to claim a grand slam singles title in the 55-year Open era.

But the 27-year-old was ultimately left to rue being only able to convert two of 11 break-point chances, looking hot and bothered in London’s SW19.