It is hard, if not impossible, to find a player shorter than Lisandro Martinez, who has gone on to flourish as a centre back in the Premier League.

The cultured Ajax defender is the subject of a £43M bid from Manchester United, but while he is celebrated for his skill on the ball and reading of the game, unsurprisingly, questions have been asked about his height.

At five-foot nine-inches, (or 175cm), Martinez will be the shortest central defender in the English top flight next season, should he follow his former manager, Erik ten Hag, from the Johan Cruyff Stadium in Amsterdam to Old Trafford.

And he will be up against some of the biggest strikers in world football. 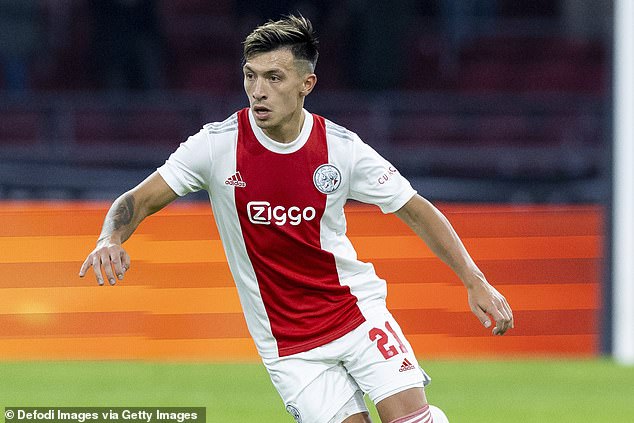 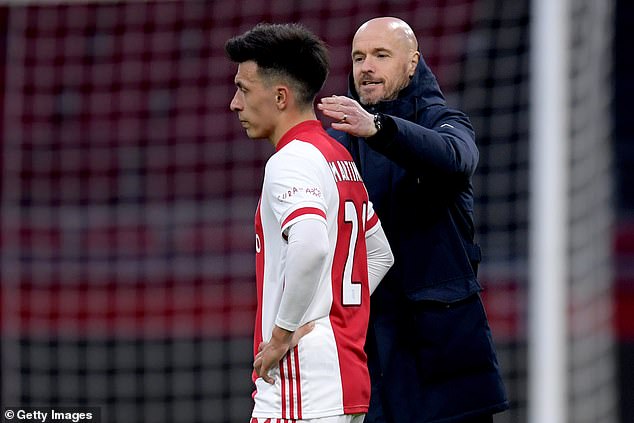 Looming over the diminutive Argentine will be Bournemouth’s Welsh giant, Kieffer Moore, and the Norwegian newcomer, the beast from the east, Erling Haaland at Manchester City, who both stand at six-foot-five – so eight inches taller than Martinez.

In fact, unfortunately for the Ajax stopper, a trend towards smaller strikers is set to reverse in the coming campaign and the Big Number Nine is back in fashion in the Premier League.

There could be eight supersize centre forwards lining up against him next season, who stretch the tape measure to six-foot-three or more, including, Chris Wood at Newcastle.

Meanwhile, the likes of Darwin Nunez, who has joined Liverpool from Benfica, is hardly a shorty at six-foot-two. 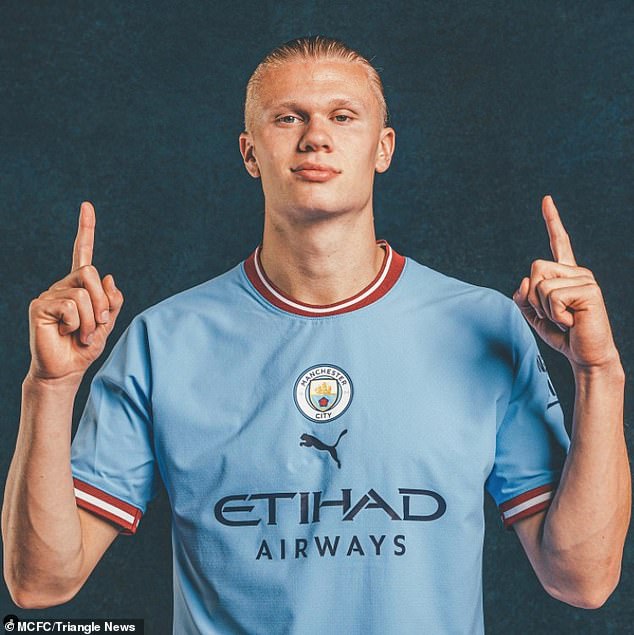 At five-feet-nine, the defender will be up against the likes of Erling Haaland, eight inches taller 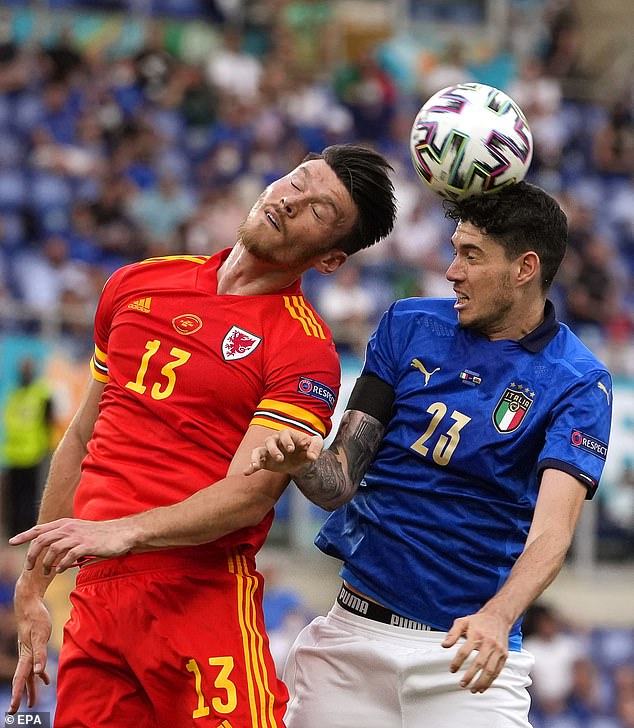 By any measure, six to eight inches (or 15 to 20cm) is a lot to concede to an opponent and former United and England centre-back, Rio Ferdinand, fears it may be too much.

‘You’ve got to be ready physically to play against these big strikers, Ferdinand said on his Five YouTube Channel.

‘[Darwin] Nunez and [Erling] Haaland have just gone into the big teams at Liverpool and Man City. They are over six foot; he is going to have to deal with people like that on a regular basis.

‘Chris Wood at Newcastle, these are big, big guys, you can go through the league and find players of this ilk. Will he be able to deal with people like that because physically, he’s on the smaller side for a centre half.’

Ferdinand is being respectful. Lisandro is small in that position in England. Full stop. 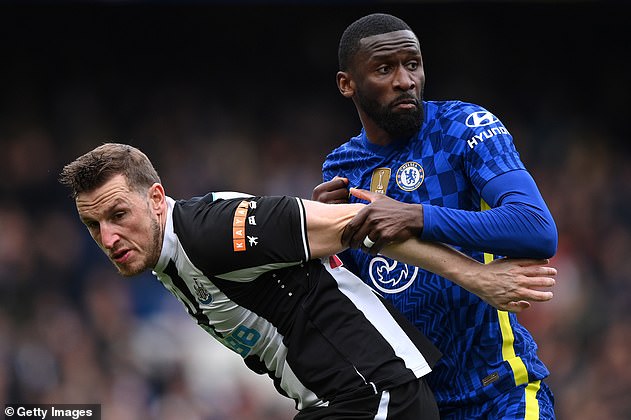 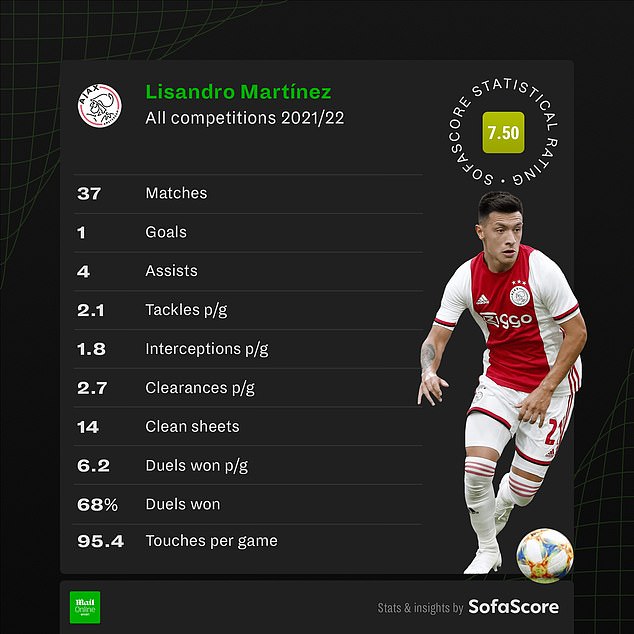 During the last campaign, Chelsea’s long-serving defender and captain, Cesar Azpilicueta, 32, was one of the shortest central defenders.

He filled in on 12 occasions for the Blues in the top flight, but he is still more than an inch (3cm) taller than Martinez, which is significant if one of your key performance indicators is winning aerial duels.

Nathan Ake, 27, did a decent job for Manchester City, when he played as a central defender in nine out of 14 appearances in the Premier League last term, but he has a two-inch height advantage.

So why does ten Hag want Martinez so badly that he is willing to take a risk on the player’s height? 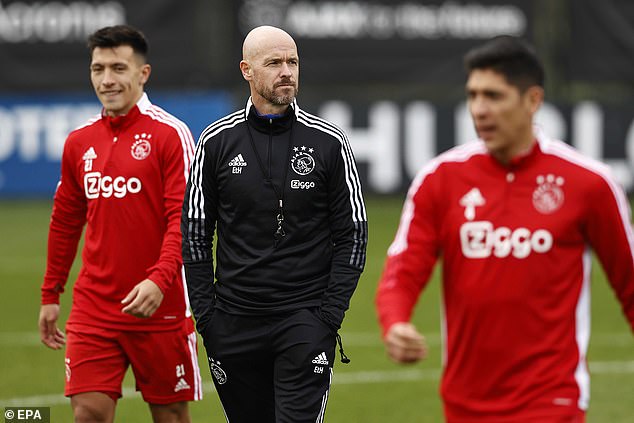 Ten Hag (c) used Martinez (left) in midfield in 2019-20 season, before restoring him to defence

Simply, the Dutchman wants possession of the ball and Martinez is outstanding in that aspect of the game, but he also he trusts him to adapt to the defensive challenge.

Ten Hag is well aware of Martinez tactical strengths. At Ajax he played him at the base of his midfield during the 2019-20 campaign, where the Argentinian easily pulled the strings of one of Europe’s most accomplished, technical teams.

‘We were looking for a brain for central midfield,’ said ten Hag. ‘We knew Martinez had played in central midfield, but could he do it in Ajax’s system? We tried him there and we saw good things.’

Martinez readily draws comparison with Javier Mascherano, who is five-foot-nine, but one centimetre shorter. Mascherano was converted from a defensive midfielder into a defender by Pep Guardiola at Barcelona.

Guardiola wanted Barca to control the game from back to front and to do that he needed a central defender who excelled with the ball, while still able to dominate opponents.

The move was a great success, although the player himself was not always wholly enthusiastic, Mascherano did claim five LaLiga titles, two Champions Leagues and two FIFA Club World Cups under Pep.

Like Mascherano, Martinez is a defender who can play, and what he misses out on in height has to be made up for in nous, aggression and quality.

And as was the case with his compatriot, Martinez has shown he can run matches not just from midfield, but from the middle of the back line, too. 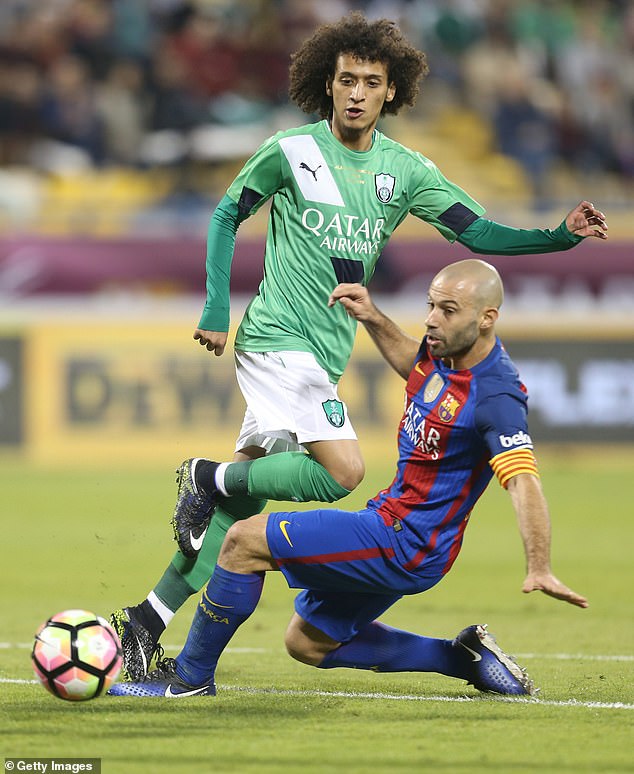 Martinez is similar to Javier Mascherano, who played in midfield and defence to great effect 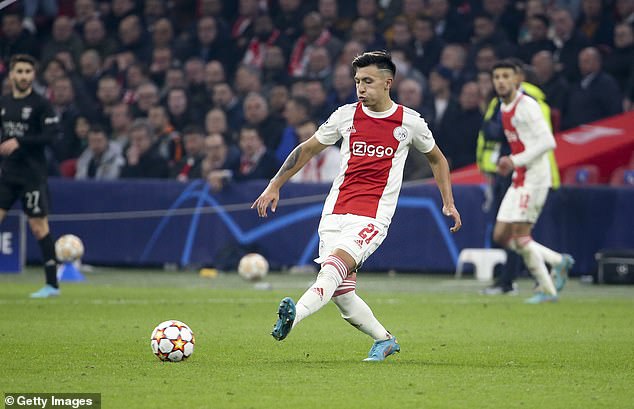 Like Mascherano, Martinez is excellent on the ball and is comfortable playing out from the back

He made an average of 92.4 passes per 90 minutes, more than any other player in the Eredivisie, last season. He can play short or long and with an accuracy rate of almost 90 per cent, he was one of best distributors of the ball in the league.

If Frenkie de Jong can be prized away from Barcelona that pair are capable of establishing a grip on games, which will help United in attack and defence. That is the prize ten Hag is seeking.

Even so, Ferdinand is right to highlight the physicality of strikers in the Premier League. Martinez has not experienced such an onslaught in Holland.

However, the 24-year-old has defended high balls and crosses well and, on the whole, he has not been exposed by the big lads, when he has faced them.

En-route to winning the Eredivisie, Martinez won 79 of his aerial duels. These stats compare well to United’s best defensive header of the ball, Harry Maguire, who won 75 aerial battles in the Premier League last season – and both players claimed victory in more than seven out of 10 challenges. 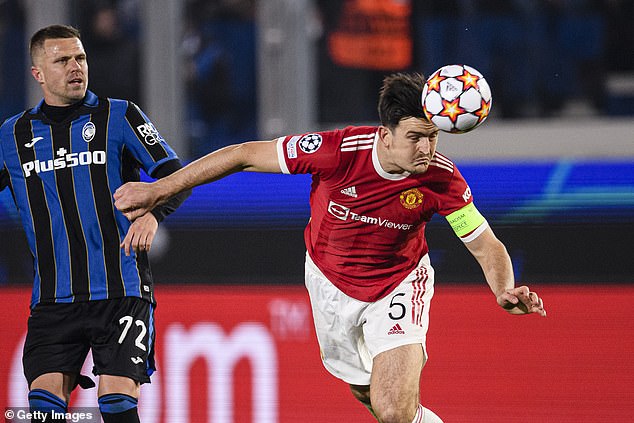 Of course, the overall quality of the Premier League is ahead of the Eredivisie, with more games closely contested in England compared to Holland. (Ajax scored five or more goals on 10 occasions last season).

But football in the Netherlands is not all about stroking the ball around. There now a similar number of headers per game in the English and Dutch top flights, according to Statsbomb. And there were actually more crosses in Holland, with 18 per game, compared to 12 in England at the highest level, during the last campaign.

In league games, Martinez faced four strikers, who were six-foot-three or above, and while they were not at the same level as Haaland and Nunez, they only scored two goals between them, one a break away and another a shot from the edge of the box.

And the Ajax man did compete against both Haaland and Nunez in the Champions League. 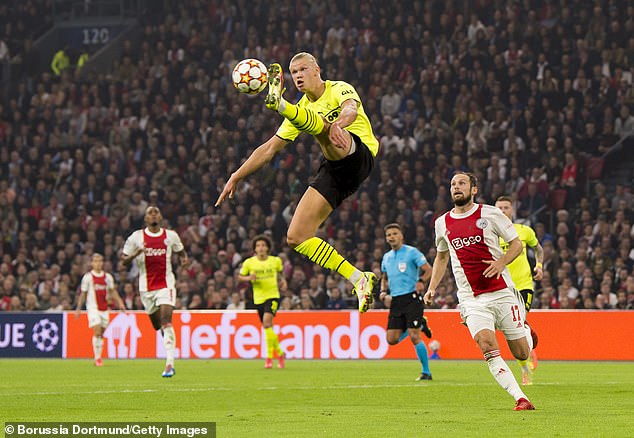 Martinez excelled in the Champions League against Haaland, snuffing out attacks 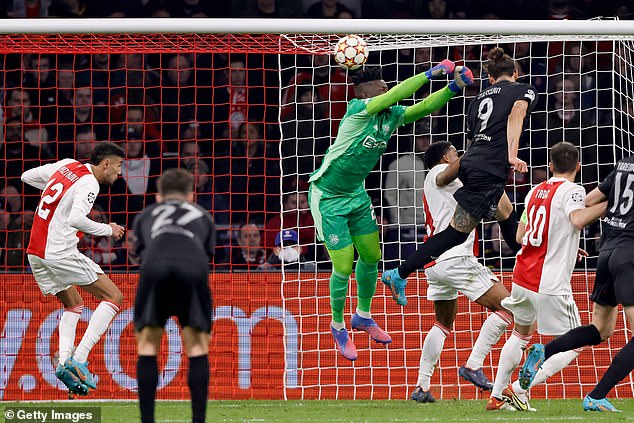 But Benfica defeated Ajax in the Round of 16, Nunez scoring the decisive goal from a corner

He dominated the Norwegian in their one encounter in Group C, easily coping with Borussia Dortmund’s counter-attacking style and using his quality on the ball to consistently wriggle away from trouble and launch attacks, in an accomplished display.

Benfica posed Ajax more problems in the Round of 16 tie, with Nunez nicking a 2-3 aggregate win in Amsterdam in the second leg after heading home from a corner.

Ajax struggled to deal with set pieces with Nunez and Jan Vertonghen causing havoc, but that was not just down to Martinez. His central defensive partner at Ajax, Jurrien Timber, 21, is only 5 feet 10 inches, himself, and Nunez overpowered him for the winner.

It is worth bearing in mind that at United, in the 4-3-3 formation ten Hag has always favoured, Martinez would have minders.

Maguire, for all his critics, is dominant in the air and uses his six-foot-four frame well, Raphael Varane is six-foot-three and Victor Lindelof six-foot-two.

And whatever Martinez lacks in height, he makes up for on the ground. In addition to his poise on the ball, he is ranked as the second-best defender in the Eredivisie (just behind team mate Timber) by the stats website, Soccerment.

He scores well on all of the usual measures, such as duels won, tackles and interceptions. But when you watch him play, there is a reading of the game that is not easily captured by data. He consistently steps in to force the issue with attackers at the right time, or drops off to cover the run in behind and is excellent one-versus-one.

United’s defending looked ponderous last season, so bringing in such an intelligent and responsive player may be exactly what is needed.

While a five-foot-nine centre back is unusual in the Premier League, it is not unknown in Europe. In fact, one of the best defenders the world has ever seen was a similar height. 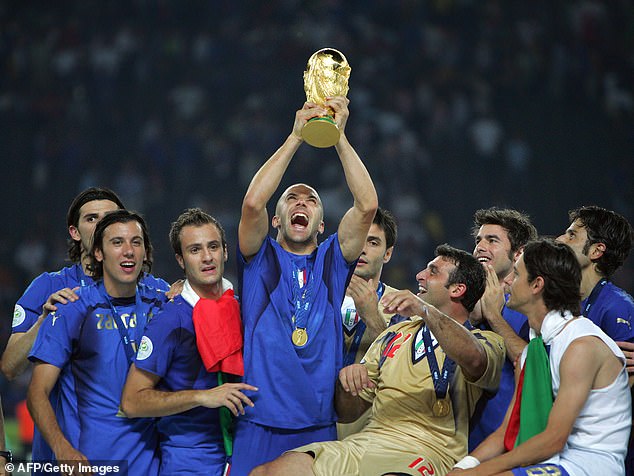 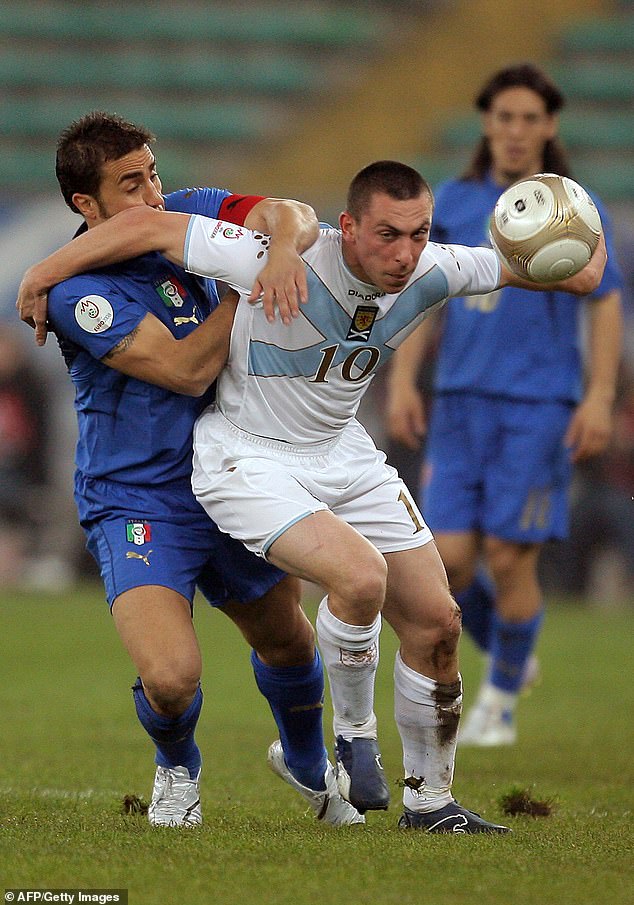 Italian legend, Fabio Cannavaro, was capped 136 times by Italy and helped his country win the 2006 World Cup by keeping five clean sheets. He scooped the Ballon d’Or and the FIFA World Player of the Year Award the same year.

Cannavaro, whose career spanned Parma, Inter Milan, Juventus and Real Madrid, is only one centimetre taller than Martinez. He made use of tactical intelligence, strength and despite his stature, he was admired for his heading, too, timing his jump to perfection.

Martinez’s height may have concerned the coaches at his first club in Argentina, Newell’s Old Boys, but it has not held him back since and like Cannavaro he is known for his huge leap in aerial battles.

‘They were a bit worried about the issue of height [at Newell’s],’ recalled Martinez. ‘But it was something I never gave any importance.’

And despite the preponderance of big forwards in England, the game has changed in the Premier League.

Even in the last five years there are fewer long balls and headers, as the quality of players improves through domestic coaching and an influx of the finest talent, thanks to the wealth of the top flight.

The stage is set for Martinez and if ten Hag has his way, he’ll be appearing at the Theatre of Dreams this season.