ROB Kardashian has made a rare appearance in honor of his sister Khloe’s birthday celebration as he flew with family on Kylie’s private jet.

The Keeping Up With the Kardashians alum has largely stayed out of the public eye in his adult years.

But Rob, 35, resurfaced to celebrate his sister Khloe’s 38th birthday.

The reality star took to her Instagram profile on Saturday to share a video compilation of clips from her “Kamp KoKo” trip with her family.

The TV personality filmed videos of the outside of the plane fully decked out with pink balloons.

Fans caught a glimpse of Khloe’s daughter True, four, and her cousins dressed in colorful pajamas, running around the jet in excitement. 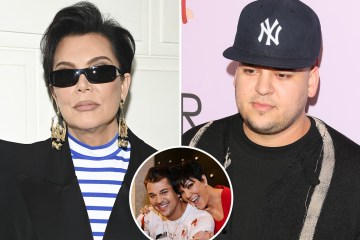 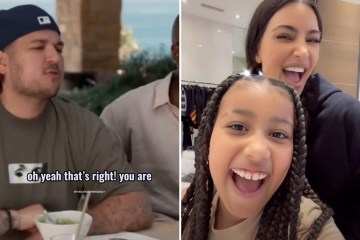 The mother of one also recorded clips of a beautiful birthday cake with macaroons and flowers.

In one scene, the back of Rob’s head could be seen as he sat perched in Kylie’s $78million private jet.

The kids played with their uncle, jumping around in circles as he watched.

Khloe captioned her post: “Wheels Up on Kylie Air. Kamp KoKo is underway.”

Later, Rob took to his own profile to share snaps from the luxury getaway, including one of his own daughter Dream posing in a pastel tie-dye bathing suit.

The little girl stood on a boat overlooking crystal blue waters as her hair blew in the breeze.

The father of one included other photos of their mystery tropical oasis, where the family ate treats, played poolside, and visited the beach.

Rob concluded his post with a snap of the stunning sunset views while enjoying a hookah.

He included a final image of his legs as he rested on the flight back to LA.

The youngest Kardashian has chosen to live life primarily out of the spotlight while his sisters dominate the social media sphere.

Recently, momager Kris Jenner, 66, admitted that she turned down a major business opportunity for her son, and later regretted the decision.

The family matriarch made the confession during a guest appearance on Wednesday’s episode of The Martha Stewart Podcast.

The 80-year-old host had some hard-hitting questions for the Kardashian-Jenner, including if she regretted turning down an opportunity that later became a “big blockbuster” success.

The Hulu star didn’t hesitate with her response, name-dropping a now widely-successful company that once approached her son with a business proposal.

“You know what, it’s so funny. I had this conversation with somebody the other day. I think it was Emma Grede from SKIMS; she works with us on Good American.

“She said, ‘remember the time somebody wanted to work with Rob [Kardashian]’ in the backend of it, I think it was Tinder, the dating app.

“And I was like, ‘oh no, no hell no, no dating app’… I was like, ‘dating app, what are you talking about?'” Kris detailed her reaction.

The mother of six explained that she was not aware of the potential value of the dating app, leading her to pass on the collaboration.

“I had no idea. And we were talking about it yesterday, and we were laughing, and I said ‘oh my gosh,’ you know, how funny.”

Kris, who manages all of her children’s careers, admitted that she sometimes does miss the mark.

“Isn’t that crazy that I just, I did not get it at the time? You know, mamma doesn’t always no best, but I try. I try,” she said.

Over the years, Rob has tried his hand at other business ventures, including a hot sauce brand, sock collection, clothing line, and soda collaboration.

And while the Arthur George founder initially found fame with his siblings in the reality TV world, he has since stepped away from the small screen.

Rob has kept a low profile in recent years, and he reportedly opted out of his family’s new Hulu series, The Kardashians.