Chris Pratt jumped to his Instagram earlier on Sunday to pay a sweet tribute to his Jurassic World co-star, Bryce Dallas Howard.

The Guardians Of The Galaxy star, 43, and Bryce, 41, have worked on the dinosaur-filled franchise for nearly a decade, and have developed a close friendship.

Jurassic World: Dominion, which hit theaters last month, is set to be the last film in the beloved trilogy, and the actors have become quite sentimental. 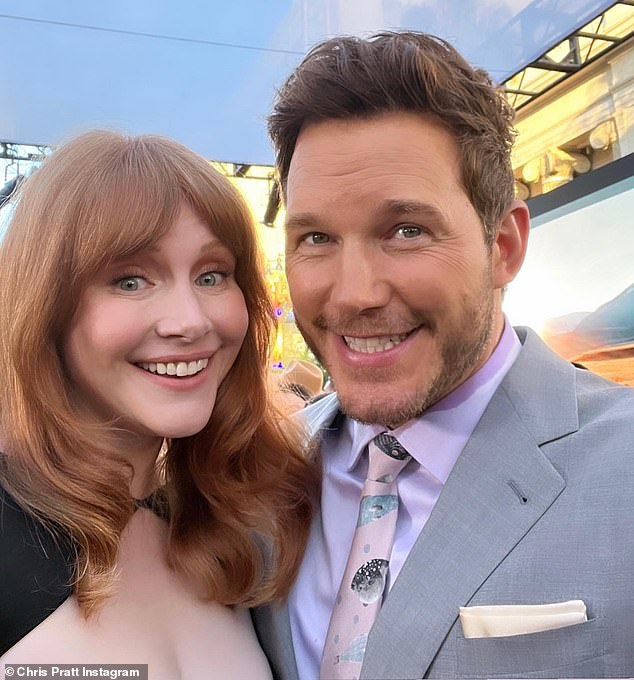 The actor uploaded photos of the two together for his tribute post. One picture showed the glamorous stars standing close together and smiling for a quick selfie at the Hollywood premiere of Jurassic World: Dominion.

The second photo Chris shared showed the two of them again smiling in a separate selfie.

He added a caption to the post, explaining how much he appreciated working with the talented actress over the years and having the opportunity to tell such a riveting story in the Jurassic World franchise.

‘It’s been 1 month since #JurassicWorldDominion hit theaters and and I can’t help but think about my partner through it all,’ he wrote. 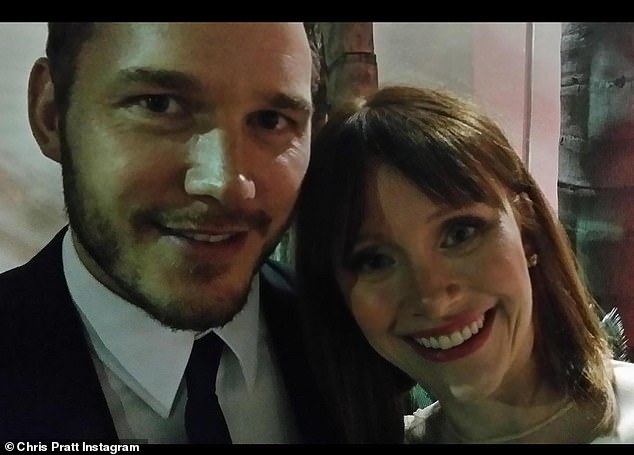 Amazing memories: The two actors had the chance to work together for eight years on the Jurassic World trilogy

‘You’ve been by my side through this crazy ride for over 8 years and I wouldn’t have it any other way. 8 extraordinary years. 3 fantastic films. It’s been such an honor sharing this journey with you,’ Chris added.

The two stars have been co-stars since the first Jurassic World film was released in 2015.

The Help actress also uploaded a post on her own Instagram page on Sunday to thank Chris for talking to her students for her Nine Muses Lab.

The course is to help educate students who are interested in the world of filmmaking and is part of Bryce’s entertainment company called, Nine Muses Entertainment.

‘Favorite thing #6718 about @prattprattpratt: I can rely on him for a belly laugh as much as I can for incredibly insightful advice,’ she added in her caption. 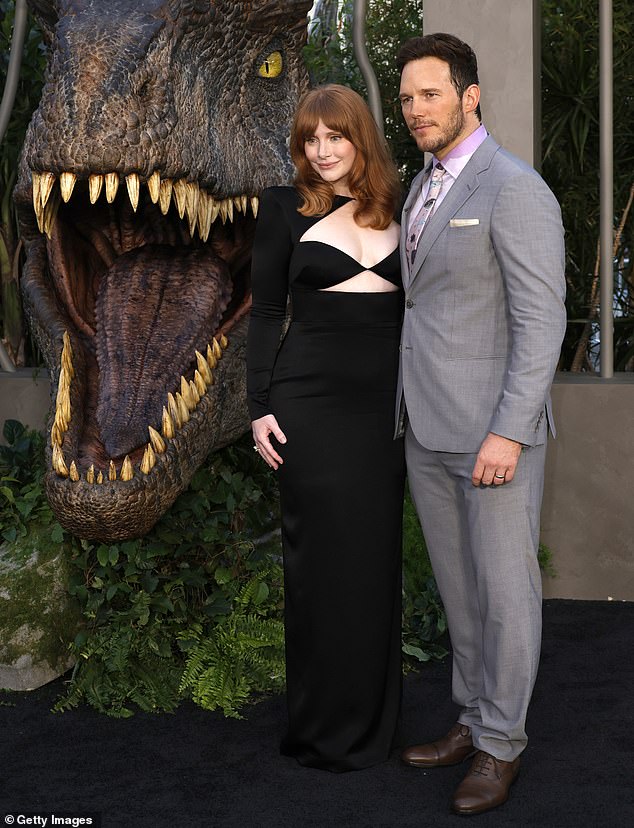 ‘We’re very compatible’: During an interview with ET, Bryce stated that the two stars were very ‘compatible’

In a joint interview on Entertainment Tonight with Chris, Bryce gave her honest opinions about her co-star.

‘Chris is someone who I respect and admire and have a blast with and we’re very compatible as team members, honestly, as co-workers,’ she stated.

‘Getting to have a friend in my life like you has been absolutely amazing,’ the actress added to Chris.

The Parks and Recreation actor gave a funny response to his co-star to also add in about their friendship. ‘Bryce is actually the secret weapon. I think she operates in the shadows like a ninja.’ 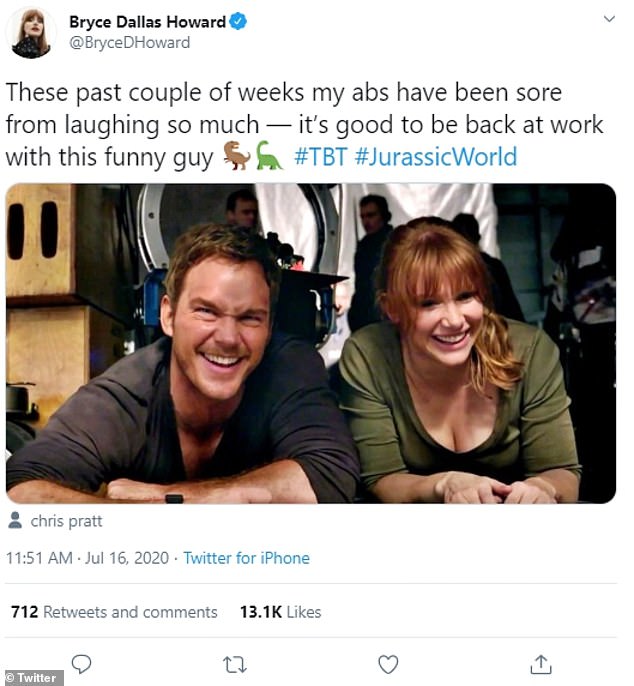 Fun times on set: The two actors were pictured sharing a laugh on set which Bryce shared on her Twitter page 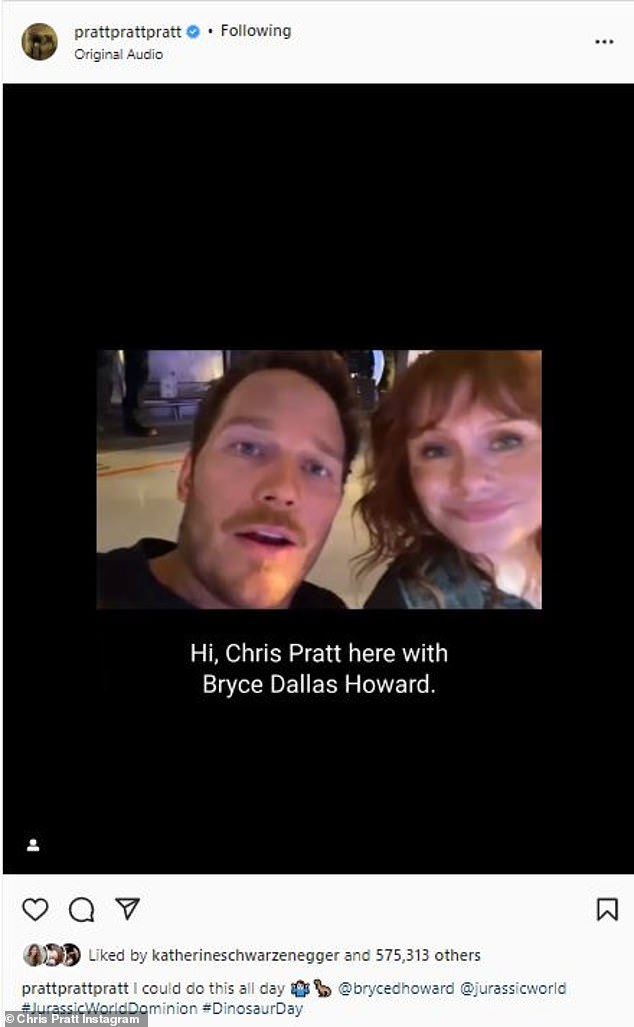 Long-lasting friendship: Chris and Bryce get along very well and constantly make each other laugh on and off set

During their interview with ET, Bryce admitted that the on-screen kiss the two shared for the first time in the trilogy was actually unscripted.

The actress then added jokingly, ‘Here’s a little thing to know about me. I’m always vying to kiss Chris Pratt in these movies.’

The two actors also have kids of their own around the same age, and during an interview on The Ellen DeGeneres Show, they explained how their children are also friends with each other after meeting on set.

Chris explained one day he asked his son, Jack, which friend he wanted to have pizza with, and he responded with, ‘Beatrice,’ which is Bryce’s daughter.

‘And they’ll be friends for their whole life,’ The Village actress chimed in during the interview with Ellen. 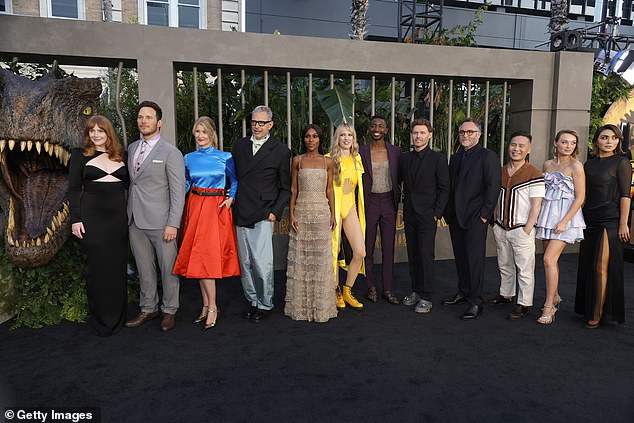 The end of a franchise: The Jurassic World cast was pictured at the premiere together in Hollywood