TEEN Mom’s Jade Cline has suffered a near wardrobe malfunction while wearing a skintight dress in new videos.

Taking to her Instagram Stories, 25-year-old Jade wowed her followers in a white lace-up mini dress.

The Teen Mom 2 alum showed off her figure as she posed in the mirror of a restroom.

She matched the skimpy outfit with a white manicure and showed off her sleeve of tattoos.

Jade arched her back to emphasize the results of her butt lift surgery. 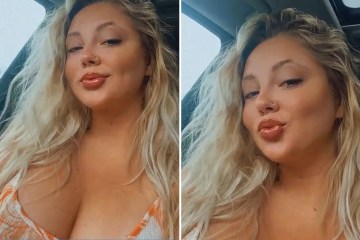 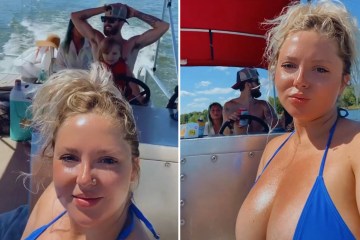 Although she didn’t add any text to the selfie videos, it appears she was enjoying a night out, and she wore a paper wristband.

Jade added the song It’s Given by Latto to add to the party vibes.

She had face liposuction and a Brazilian butt lift, which she said was extremely painful.

During an episode of Teen Mom, Jade opened up about the recovery from her BBL, saying: “The pain in my a** and legs and back is f**king excruciating. I can’t even sleep. I can’t get comfortable.

“It’s even worse than I thought.”

On the reunion special, Jade broke down in tears as she admitted that she thought she was “going to die” and “was blue from lack of oxygen” after her plastic surgery.

Jade thanked her co-star Briana DeJesus, 28, for nursing her back to health after she went under the knife.

The Teen Moms admitted that they thought Jade was going to “die”.

Jade praised Briana, who also underwent a BBL, for helping out and giving her a shower for the first time after her surgery.

IF YOU GOT IT…

Despite the scary ordeal, Jade has been happy to show off the results of her butt lift with her Instagram followers.

The Indiana native, who also is a hair salon owner, frequently posts pictures of herself in revealing outfits like tiny bikinis and skintight bodysuits.

Meanwhile, Jade has rekindled her romance with baby daddy Sean, following his visit to a rehab center.

On the Teen Mom 2 reunion show in May, he nearly broke down in tears while discussing his newfound sobriety and past battles with addiction.