ERIK TEN HAG is determined to sign Antony and Lisandro Martinez and wants Manchester United to match Ajax’s asking price for the pair.

The United boss has signed just one player so far, Tyrell Malacia, but he has a number of transfer targets the Red Devils are struggling to sign.

United have made bids for both Antony and Martinez but have fallen short of Ajax’s asking price.

According to The Times a £42million offer has been made for Martinez who is also attracting interest from Arsenal.

But Ajax are holding out for more, just as they are with Antony – slapping a £70m asking price on the Brazilian, which is reportedly £19m more than United have offered.

That is why Ten Hag is said to be pressing transfer chiefs to up their bids with both Antony and Martinez believed to be keen on joining. 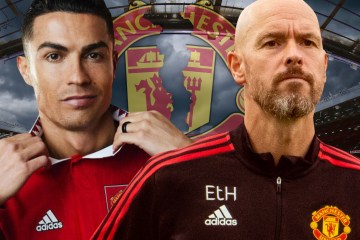 The same cannot be said for Frenkie de Jong who is reportedly hesitant to make a switch despite United agreeing a £56m fee with Barcelona.

Ten Hag and De Jong’s agent are thought to be trying to persuade the midfielder to change his mind – Barca are also keen get his salary off the wage bill.

United have made De Jong a top target this summer but now risk losing him to Chelsea, with Blues owner Todd Boehly holding talks with Barcelona President Joan Laporta about a transfer.

Ronaldo has signalled his desire to leave and the Blues are preparing a £14m offer although United do not want to sell, particularly to a Premier League rival.

But if the Portuguese does leave that will leave Ten Hag in need of another signing – RB Leipzig forward Brian Brobbey has been targeted following his loan spell under Ten Hag at Ajax last season with the Dutch champions also eyeing a transfer.