HONEY Boo Boo and her boyfriend Dralin Carswell have lent a helping hand.

The TV star, 16, and her man, 21, posed with sister Pumpkin and her four kids she’s “struggling” to support.

Honey Boo Boo, whose real name is Alana Thompson, is on vacation in Los Angeles and hit Universal Studios with her sweet group.

“Thank you to @unistudios for the tickets, we had the BEST time!! We will be back,” she captioned her “#sponsored” Instagram post Saturday.

In the first sunny snap of two, Alana smiled with her notably older boyfriend Dralin and sister/de facto mother Lauryn ‘Pumpkin’ Efird – and her husband Josh.

Alana wore black eyeliner and a wide smile while Mama June-free, and in the second snap the camera zoomed in on the action. 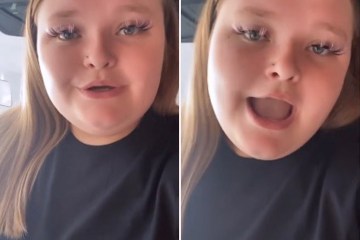 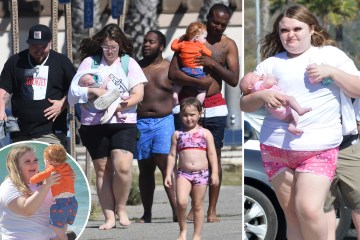 They got close while also with her sister Pumpkin’s newborn twins Sylus and Stella in strollers.

Along for the ride were her other children Ella, four, and an absolutely firey-haired Bentley, 11 months.

Bently was being held by his dad while Alana handled one of her sister’s two carriages.

In her Instagram Stories, Alana advertised that she was doing a meet-and-greet at Hollywood Burger while in town for $25 a pop.

‘THEY DESERVE THE VACATION’

“I’m glad to see Alana happy,” one fan commented on the two snaps which were under the Universal Studios globe fountain.

“In love with Bentley’s hair,” wrote another.

“The family that truly deserves a vacation” wrote a third.

The teen is now being raised by her older sister after she was granted full custody from June “Mama June” Shannon – mother to both.

Lauryn was granted guardianship due to Alana not getting the proper care from their mother.

June, 42, who struggles with drug addiction and threw her daughter in TV fame, has been estranged from them both.

But Alana’s life with her sister isn’t easy as pie either.

The Sun has exclusively revealed that the young mother has been struggling to provide for her unexpectedly expanded family.

Several factors have come to light regarding the 22-year-old’s financial situation.

In a heartbreaking confession in March, the reality star and mother-of-four said a banking glitch of just $650 brought her account into the negative.

One family insider claimed that “Pumpkin told June she didn’t have any groceries in the house, and she told Pumpkin ‘Well you better get on TikTok and make some d*** n money.”

The source added incredulously: “Why would a mother even say something like that?!”

The sisters also reportedly have a meeting lined up with some Hollywood bigwigs about getting their own spin-off reality show.

The family is currently on Mama June: Road to Redemption airing Friday nights on WeTV.

While fans of the show assume the long-standing reality stars make a good living, in an interview with The Sun in May, Mama June, 42, claimed “What a lot of people don’t realize that this filming doesn’t pay what people think it does.

“We all have regular entrepreneur jobs after filming- like [my daughter] Jessica works at a daycare. Josh works with a friend of ours. We have events that we go out and do.”