Woman slammed by thousands of offended foodies over her ‘chaotic’ sandwich cutting technique: ‘Is everything okay at home?’

A woman has sent the internet into a spin after sharing the ‘crazy’ way she cuts up her sandwiches.

Posting a photo to Reddit, the British foodie showed how she cuts her sandwich in six triangles with a diagonal slice one way and two the other.

‘Personally I believe this is the best way. Optional shapes and sizes, plus two extra pieces,’ she captioned the picture prompting an onslaught of shocked responses. 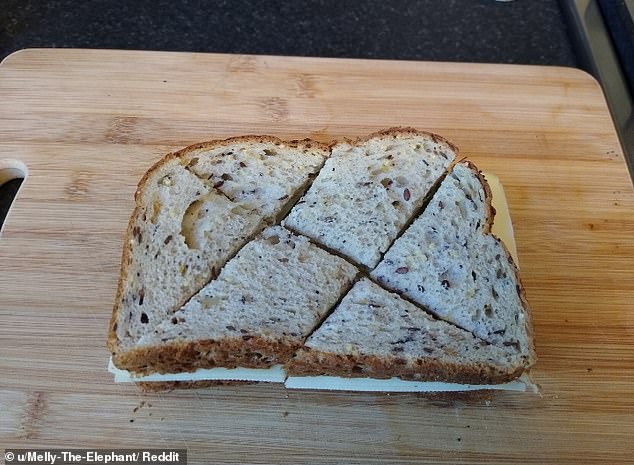 A British woman has divided the internet, drawing in dozens of shocked responses after posting an image of the way she cuts her sandwiches

Are you offended by this sandwich?

‘Chuck it in the bin, then get in after it. Psychopath,’ one user said while a second exclaimed: ‘You monster!’

‘Is everything okay at home? Do you want us to call someone? The middle ones only have one crust! You need crust on at least two sides for structural integrity, no one wants a flappy sandwich,’ a third analysed.

Someone said while the cutting technique would be perfect to accompany soup, they called it ‘madness’.

‘Do you want a war, cause this is how we start a war!,’ said another.

After reading the barrage of comments, the woman added she has been dividing her sandwiches into six parts for about a year.

‘I make them like this to take to work, smaller chunks mean I don’t have hamster cheeks if I have to communicate with people,’ she said.

‘Because I kept eating four parts of sandwich at my desk then getting sad I had eaten all of the sandwich without realising and then there was none left. Six parts in different shapes means I actually look at and enjoy my sandwich.’

Not everyone was offended by the unorthodox sandwich style with many saying they were keen to try it for themselves.

‘I like it. I get bored easily but with this pattern there is a completely new little sandwich each time,’ one person replied.

‘I kind of like it, smash the system,’ laughed another and a third joked: ‘Progress in society isn’t made by those who are scared of change’.

‘It… it makes so much sense… my life has been a lie,’ a fourth said.