But what they may not have spotted hidden among the 60-page commissioning report are two brand new photos of Jupiter.

The glowing snaps of the gas giant – the closest one to Earth in our Solar System –  were taken by the telescope when it was being tested.

They show Jupiter’s rings as well as three of its moons; Europa, Thebe, and Metis.

The shadow of Europa can also be seen on the image designated ‘F212N’, just next to the infamous Great Red Spot. 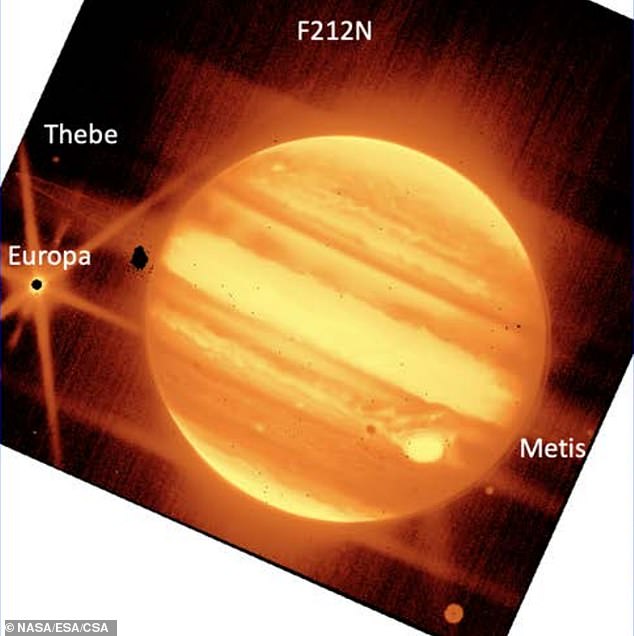 NIRCam short-wavelength image of Jupiter taken by NASA’s James Webb Space Telescope, showing the moons Thebe, Europa and Metis and the Great Red Spot on the planet’s surface. It was taken using the F212N filter that highlights light of wavelength 2.12 micrometres 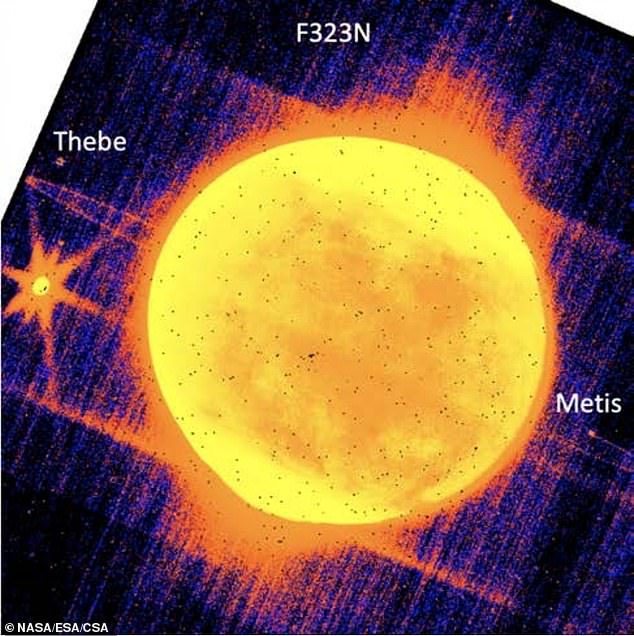 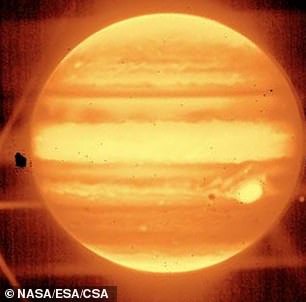 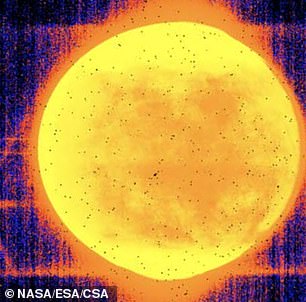 The commissioning report states that the pictures ‘demonstrated that JWST can track moving targets even when there is scattered light from a bright Jovian planet’. They also show its ability to capture details like rings and moons around bright planets

Jupiter is the fifth planet from the Sun and the largest in our solar system.

It is  a massive ball of gas that is made mostly of hydrogen and helium, with some heavy elements.

‘Jupiter’s familiar stripes and swirls are actually cold, windy clouds of ammonia and water, floating in an atmosphere of hydrogen and helium,’ said NASA.

‘Jupiter’s iconic Great Red Spot is a giant storm bigger than Earth that has raged for hundreds of years.’

The planet is twice as large as all of the other planet’s combined, and the Great Red Spot alone is large enough to fit the entire Earth insidee.

The two images were taken by JWST’s Near-Infrared Camera (NIRCam), and each use a different filter to highlight separate wavelengths of light.

The report states that the pictures ‘demonstrated that JWST can track moving targets even when there is scattered light from a bright Jovian planet’.

NASA chose nine targets to test the telescope’s ability to track fast-moving objects, which moved at speeds of up to 67 milliarcseconds per second.

Other onboard instruments tested include the Near Infrared Imager and Slitless Spectrograph (NIRISS) and the Mid-InfraRed Instrument (MIRI), which detect and stabilise different wavelengths.

Jupiter was the slowest target, moving at just 3.3 milliarcseconds per second, but all tests were successful.

These images also demonstrate its ability to capture details like rings and moons around bright planets.

The commissioning report explains: ‘Observing a bright planet and its satellites and rings was expected to be challenging, due to scattered light that may affect the science instrument employed, but also the fine guidance sensor (FGS) must track guide stars near the bright planet.

‘These observations verified the expectation that guide star acquisition works successfully as long as Jupiter is at least 140″ away from the FGS, consistent with pre-flight modeling.’

The success in this test opens up the possibility for the telescope to  track near-Earth asteroids (NEAs), comets and other interstellar objects.

The commissioning report summarises six months of testing the JWST instruments, and was released yesterday along with the first official set of deep space photos.

The authors wrote: ‘The key outcome of six months of commissioning is this: JWST is fully capable of achieving the discoveries for which it was built.

‘JWST was envisioned ‘to enable fundamental breakthroughs in our understanding of the formation and evolution of galaxies, stars, and planetary systems,

‘We now know with certainty that it will.’ 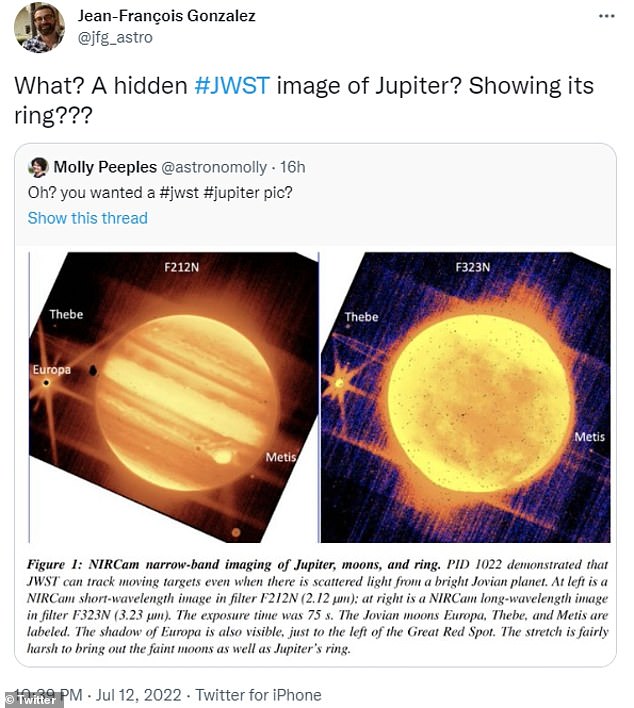 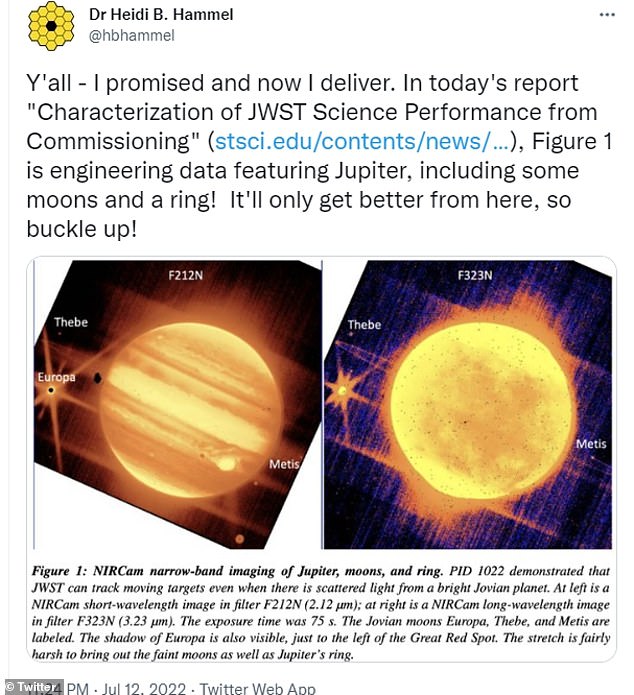 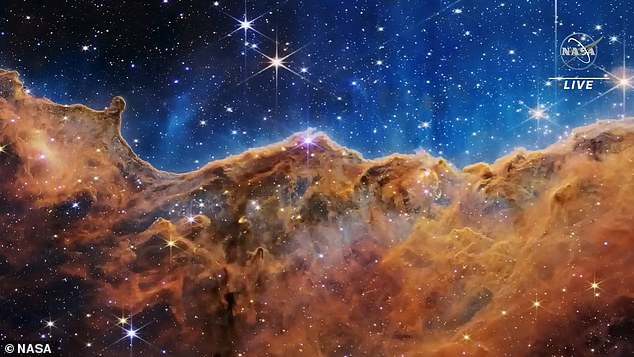 Dazzling, unprecedented images of a ‘stellar nursery’, dying star cloaked by dust and a ‘cosmic dance’ between a group of galaxies have been revealed to the world by NASA’s new super space telescope. Among them is an image revealing baby stars in the Carina Nebula (pictured), where ultraviolet radiation and stellar winds shape colossal walls of dust and gas

Cameras aboard Webb captured the latest image of this planetary nebula, catalogued as NGC 3132, and known informally as the Southern Ring Nebula. It is approximately 2,500 light-years away. One image was taken in the near-infrared (left) and another in the mid-infrared (right)

INSTRUMENTS ON THE JAMES WEBB TELESCOPE

These included images of a ‘stellar nursery’, dying star cloaked by dust and a ‘cosmic dance’ between a group of galaxies.

Webb’s infrared capabilities mean it can ‘see back in time’ to within a mere 100-200 million years of the Big Bang, allowing it to snap pictures of the very first stars to shine in the universe more than 13.5 billion years ago.

Its first images of nebulae, an exoplanet and galaxy clusters have triggered huge celebration in the scientific world, on what has been hailed a ‘great day for humanity’.

Among the discoveries announced by NASA is that scientists have seen water vapour in the atmosphere of an exoplanet planet more than 1,000 light-years from Earth.

Webb captured the distinct signature of water, along with evidence for clouds and haze, in the atmosphere surrounding WASP-96 b — a hot, puffy gas giant planet which orbits a distant sun-like star every 3.4 days.

It is the first ever spectrum analysis of an exoplanet’s atmosphere. WASP-96 b has about half the mass of Jupiter, and its discovery was announced in 2014.

One of the five jaw-dropping pictures released shows a planetary nebula caused by a dying star — a fate that awaits our sun some time in the distant future.

Nearly half a light-year in diameter and approximately 2,500 light-years away from Earth, the Southern Ring Nebula can be seen in incredible never-before-seen detail.

Another image is of Stephan’s Quintet, which is located in the constellation Pegasus and is notable for being the first compact galaxy group ever discovered in 1877. 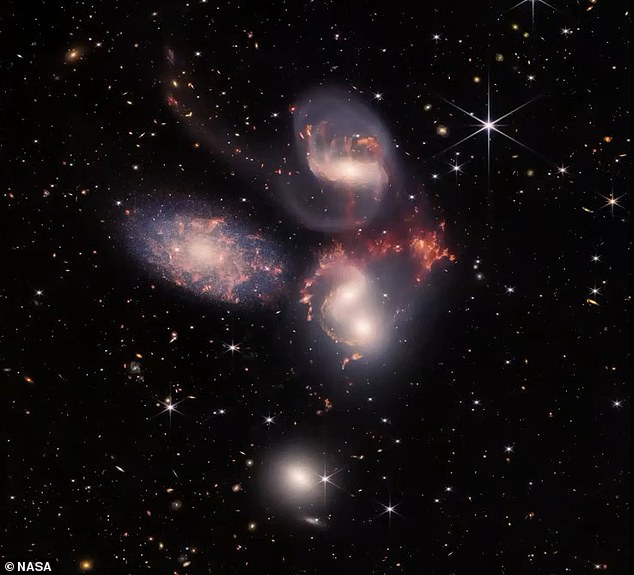 One image is of Stephan’s Quintet, which is located in the constellation Pegasus and is notable for being the first compact galaxy group ever discovered in 1877 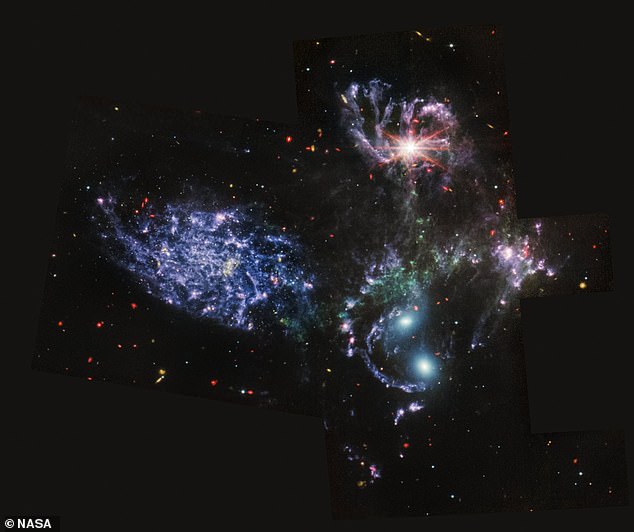 In the mid-infrared view of Stephan’s Quintet, Webb pierces through dust, giving new insight into how interactions like these may have driven galaxy evolution in the early universe 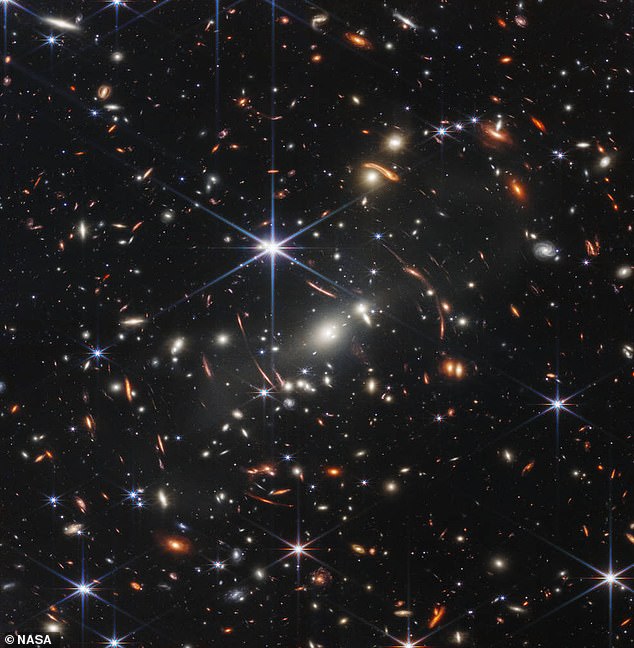 Pictured is the first image from the James Webb Space Telescope, showing SMACS 0723, a galaxy cluster billions of light-years from Earth