Tears of joy and heartbreak, less than 24 hours apart: This is the emotional toll that Russia’s war on Ukraine is inflicting on the families of those called up to fight.

Natasha, the daughter of Ukrainian special forces commander Ruslan Pustovoit, was recorded weeping with happiness on Saturday night as her father was allowed to return home for the first time since Russia began its invasion almost five months ago.

But, the following afternoon, the little girl was crying tears of sadness instead as she accompanied Ruslan to the train station to wave goodbye to him as he was sent back to the frontlines. 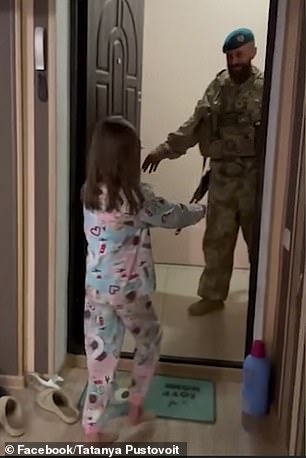 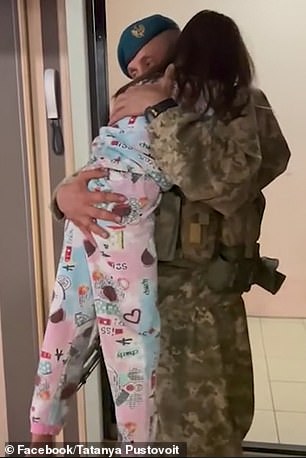 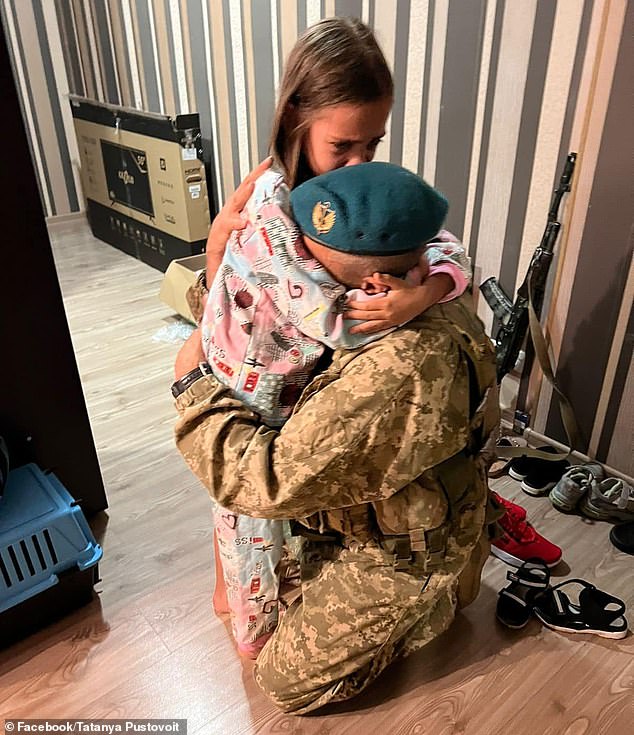 Mother Tatanya captured both moments on video, posting them on social media to show the world the cruel toll the war is inflicting.

The first footage shows Natasha, dressed in her pyjamas, waiting by the front door late at night as her father arrives in his uniform – AK rifle slung over his shoulder.

She runs out into the corridor to give him a hug, as he lifts her into the air and carries her across the threshold.

An image taken just moments later shows her standing on the floor, arms wrapped tight around her father’s head, tears clearly visible in her eyes as he buries his face into her shoulder.

Writing alongside that video, Tatanya said Natasha was ‘shocked and surprised’ to see her father at their house in Odesa – where they were forced to relocate from their native Mariupol as Russian troops razed it to the ground.

‘She prayed every day, because the last meeting was in Mariupol on February 24,’ Tatanya wrote – giving the date that Russia’s invasion began.

A second piece of footage captured the following day shows Ruslan embracing Natasha in the back of a car, as she sits crumpled into her father’s lap. 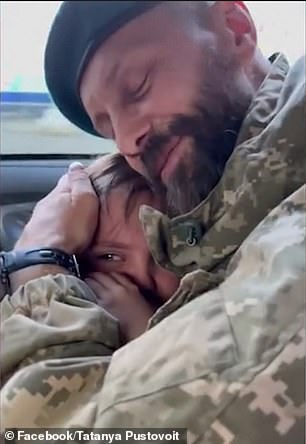 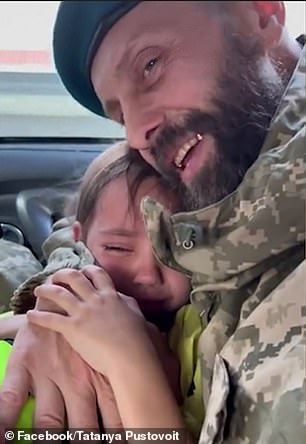 Less than 24 hours after the meeting, Natasha’s tears of joy had been replaced by tears of anguish as she accompanied Ruslan to the train station as he went back to the frontlines 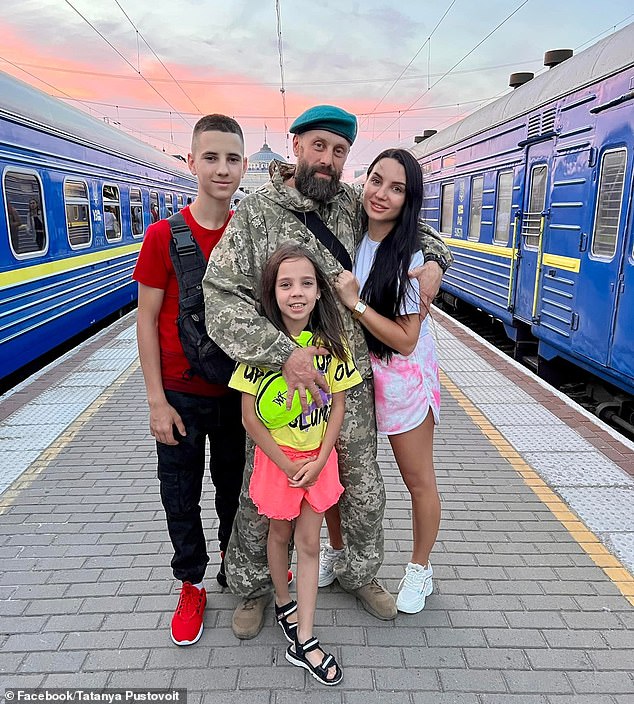 Ruslan – who has been fighting Russia since Putin’s first invasion of Ukraine in 2014 – is pictured alongside wife Tatanya (right), daughter Natasha and his son at the train station 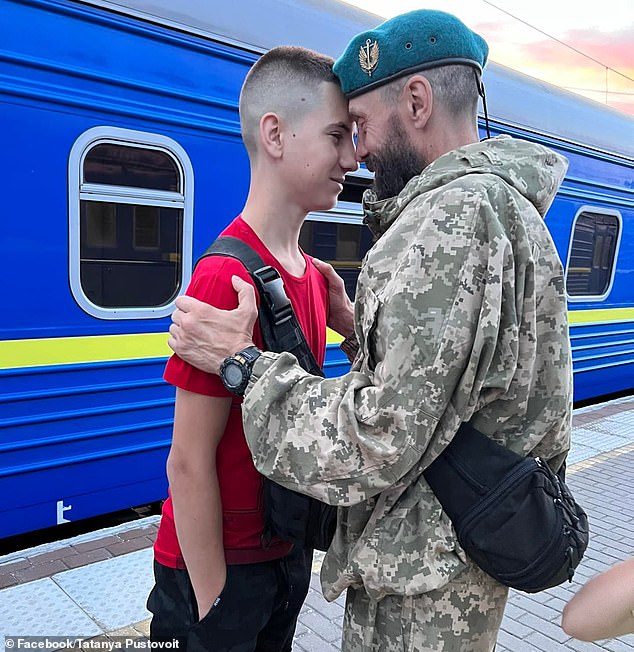 Tears of agony stream down her face, as a song called Airplanes by and artist known as Istov plays on the radio and he sings along to her.

Tatanya wrote: Natasha smiled, stopped crying, was happy to see her father after so long. And this is when Istov’s song “Airports” began.

‘I don’t know how much more strength is needed to survive all this, but our daughter suddenly started crying in a way that cannot be expressed in words. 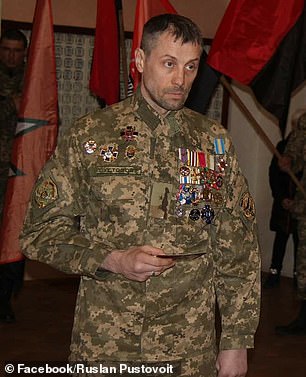 Ruslan is well-known in Ukraine, having been awarded the Order of Courage for actions against Russia in 2016 (pictured)

‘A the station, she said: “Mom, I was so afraid to let go of Papa, my stomach hurt and now my heart is going to stop.”

‘After she said that, I thought my heart would stop too. Come back alive [Ruslan]. I believe victory will be ours.’

A final photo taken at Odesa train station shows Ruslan standing with Tatanya, Natasha, and his son – also named Ruslan – with all three smiling for the camera.

Anton Gerashchenko, adviser to the Ukrainian interior minister, posted some of the footage on Twitter – saying Natasha had waited and hoped that her father would return, ‘and her dream came true.’

Ruslan is a well-known special forces commander in Ukraine, having initially volunteered to fight during Russia’s first invasion in 2014.

Serving in his native Donetsk region, he gained a reputation as a skilled special operative after planning and carrying out ‘several’ behind-enemy-lines missions.

During one mission, in 2016, Ruslan happened upon an enemy fort while advancing ahead of his unit and found himself surrounded by Russians, UATV reported.

He called for backup after coming face-to-face with an enemy soldier, and despite being outgunned two to one, he and his men managed to win the ensuing battle. 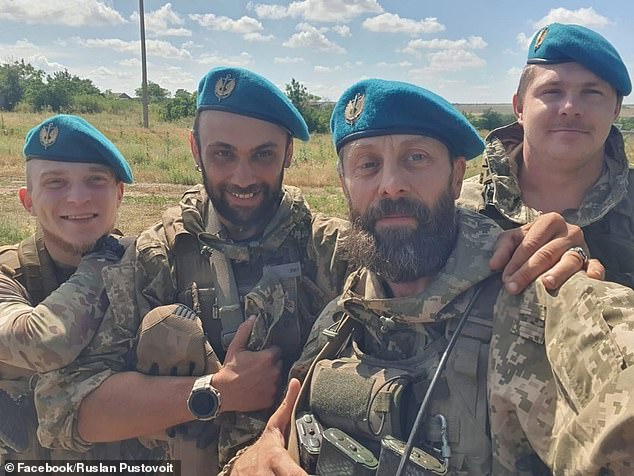 Ruslan is pictured with his comrades on the frontlines, at least one of whom has since been seriously wounded and is recovering in hospital

Three Russian soldiers were killed while another eight were captured, along with their weapons.

In recognition of his actions that day, he was awarded the Order of Courage – one of the highest honours that the President of Ukraine can bestow.

Ruslan has been wounded in combat twice, including during an ambush later in 2016 when one of his squad was killed.

Another solider managed to carry Ruslan out of battle and, despite his injuries, he was able to radio the coordinates of Russian soldiers for a counter-attack.

‘He is a true commander. Sensitive and proper. He never leaves his troops in trouble. He is a very strong-willed man,’ one of his soldiers said at the time.

Another added: ‘He is a real hero of our time. There are not very many of them, but they exist. They are among us, they live among us.’