A new Australian film based on the murder of Daniel Morcombe in 2003 has been slammed as ‘morally corrupt’ by his mother.

Daniel, 13, vanished after leaving his Sunshine Coast home on Sunday December 7, 2003, to buy his family Christmas presents at the local shopping centre.

It took a nine-year police investigation to convict Brett Peter Cowan with his murder.

Now, a movie starring Joel Edgerton is set to come out which follows the story of an undercover officer tasked with securing a confession from a man suspected of murder. It is said to be based on Daniel’s killing.

However, Daniel’s furious mother Denise has slammed makers of the movie.

‘The movie ‘The Stranger’ is not supported by the Morcombe family. Individuals who make money on a heinous crime are parasites, ‘she tweeted.

‘They are callously disrespectful to Daniel, the DMF & the Morcombe family. We find the making of the movie morally corrupt and cruel. Shame on you.’ 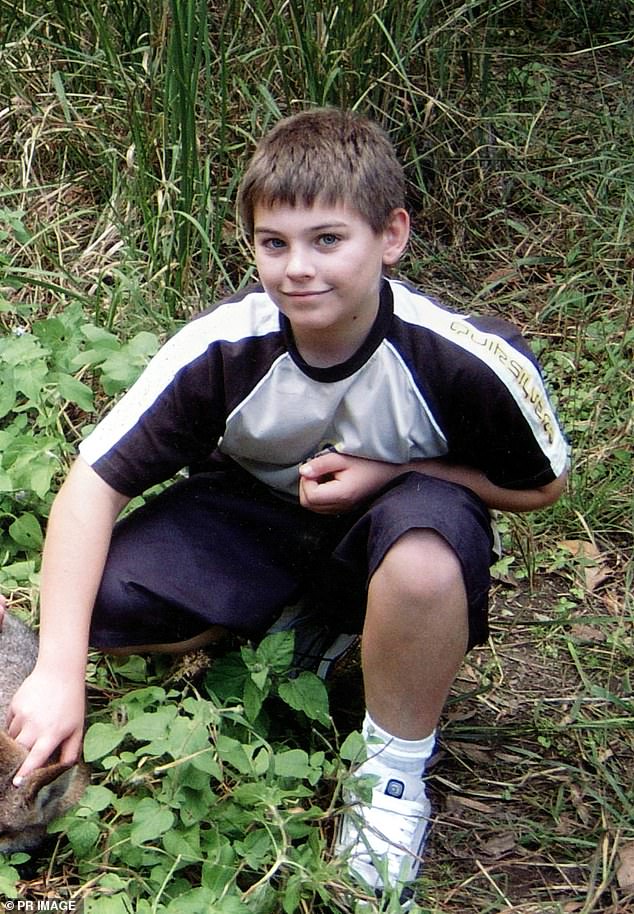 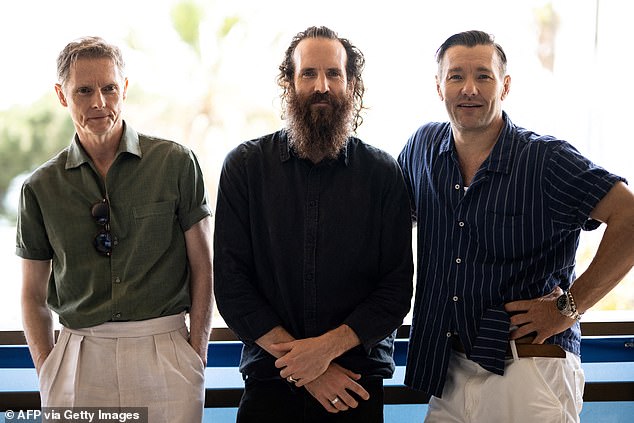 A movie starring Joel Edgerton is set to come out which follows the story of an undercover officer tasked with securing a confession from a man suspected of murder. It is said to be based on Daniel’s killing 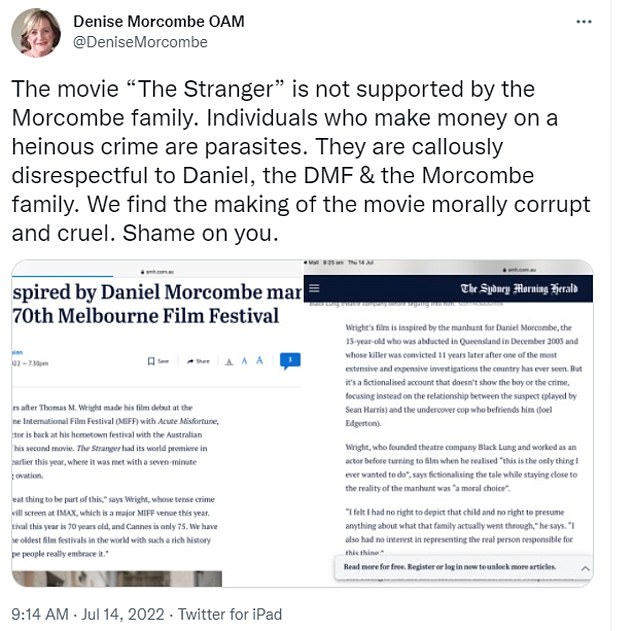 Bruce Morcombe, Daniel’s father, said the ‘connections of the movie have blood on their hands’.

‘We are not amused! How can anyone give oxygen to a crime that is so, so evil,’ he tweeted.

Writer Thomas M. Wright, who also directed the film, has not denied the story is based on the Morcombe investigation, but said he left out the family’s experience.

‘One reason I chose not to show the child or family was to make a film with a clear moral perspective,’ he told Variety in May.

‘I couldn’t presume to know anything of the experience of that family. But I could see that there was a story about empathy and making meaning in the wake of violence, not violence itself.

‘All of the actors went very deep on this film. I think it left a mark on everybody.’ 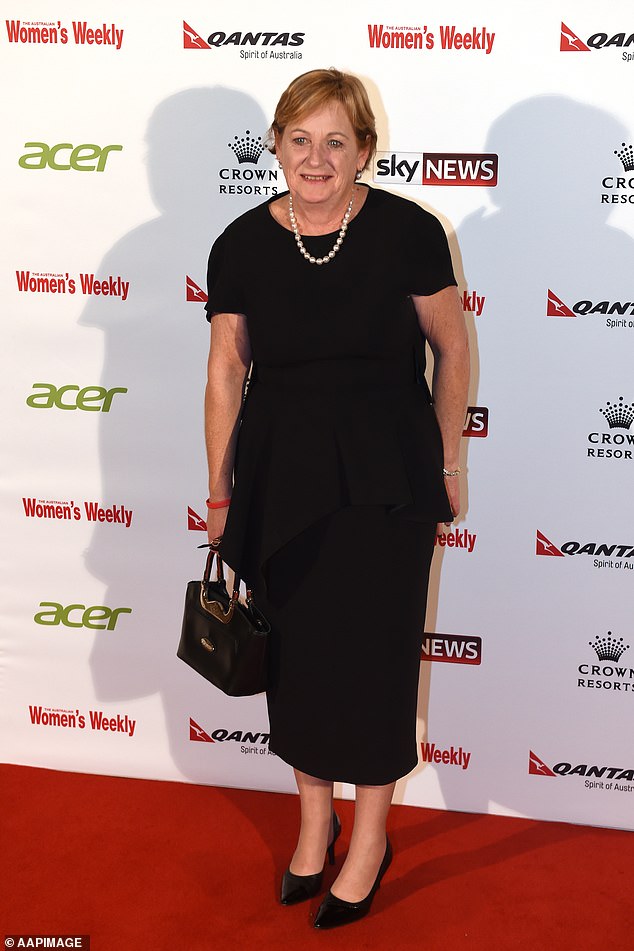 Denise Morcombe, the mother of Daniel Morcombe, has slammed the upcoming movie 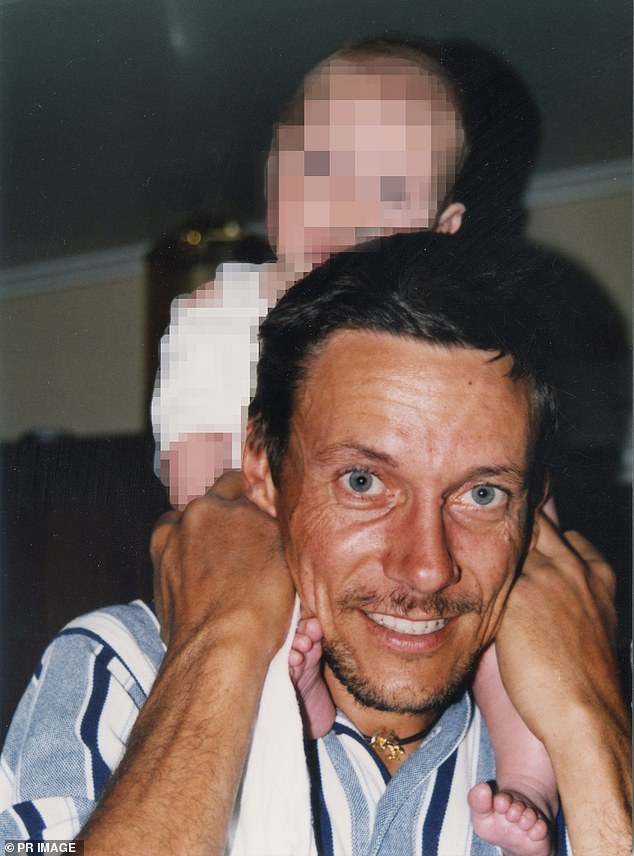 The movie premiered at the Cannes Film Festival in May and received positive reviews.

Since their son’s disappearance, Mr and Mrs Morcombe have dedicated their lives to providing safety education to children through a foundation they launched in their son’s name.

Daniel was waiting at a bus stop when he was abducted by serial paedophile Brett Peter Cowan, then 34, and taken to an abandoned house where he was molested then strangled.

His disappearance sparked one of the biggest missing person investigations in Australian history, culminating in Cowan’s arrest eight years later.

The child killer subsequently led police to where he had dumped Daniel’s remains in bushland at the Glass House Mountains in August 2011.

He was sentenced to life behind bars in Brisbane’s Wolston Correctional Centre in 2014, with a minimum non-parole period of 20 years.

Cowan remains an unpopular inmate due to his horrific crimes – which include an extensive rap sheet of child sex offences prior to Daniel’s murder.’

He has been the target of several brutal attacks at the hands of fellow inmates, including being doused with boiling water in 2016 which left him with permanent scarring.

In May 2018, he was stabbed in the ear and neck with an ‘improvised implement’ and suffered superficial injuries.

Cowan will be eligible to apply for parole in 2034.