Devastating aerial photos and video shows the extent of the damage in one Virginia community where authorities estimate at least 100 homes were destroyed, as search efforts continue for at least 44 people who remain unaccounted for.

The Dismal River area, set in the western part of the state, was particularly destroyed by the sudden storms, with homes washed hundreds of yards off their foundations into stretches of road.

On Wednesday night, the Buchanan County Sheriff’s Office announced that at least 44 people are still unaccounted for in the Whitewood area, where Appalachian Mountain ridges acted like a funnel for the rain water.

Aerial footage shows entire homes were washed away in Buchanan County, Virginia, where six inches of rain fell in just a few hours Tuesday night. The Weather Channel’s Stephanie Abrams said on Thursday that’s ‘a month’s worth of rain in a short amount of time.’

Other images from the ground show houses flattened, with roofs on top of some trucks as debris lined the streets.

Mudslides were continuing throughout the area on Thursday, washing Coca-Cola bottles and other garbage downstream in the aftermath of the devastating storm, which knocked down water and sewer lines.

Residents are now continuing to search for their lost belongings and get in contact with their loved ones, after several families found themselves homeless and without power.

But phone lines remained down in the area, CNN reports, and officials say the biggest challenge will be to locate residents after the storm tore apart some bridges and roads.

As of Thursday, over 1,000 customers in Buchanan County remained without power, according to PowerOutage.us, a website that tracks outages throughout the country, as temperatures are expected to reach 80 degrees. 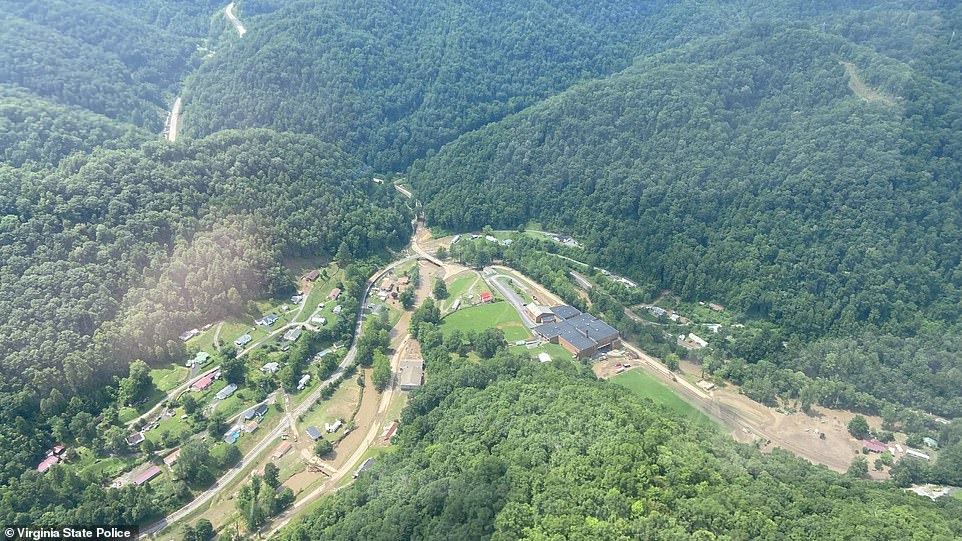 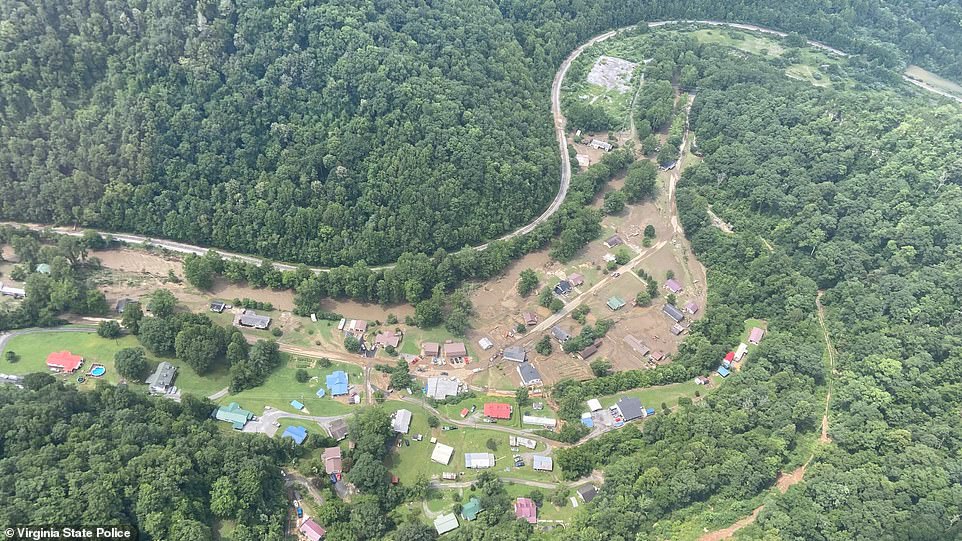 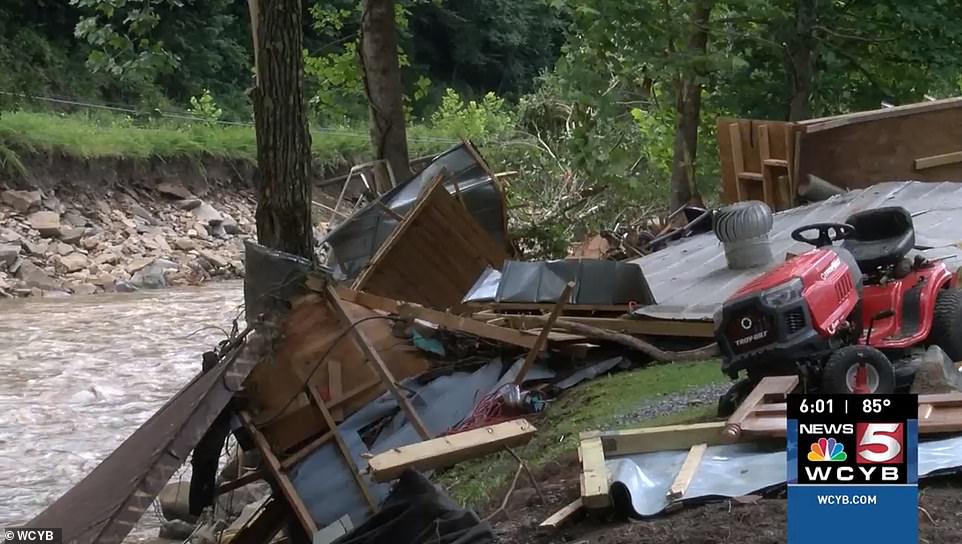 Houses throughout the county were flattened, and debris was strewn throughout streets in the area 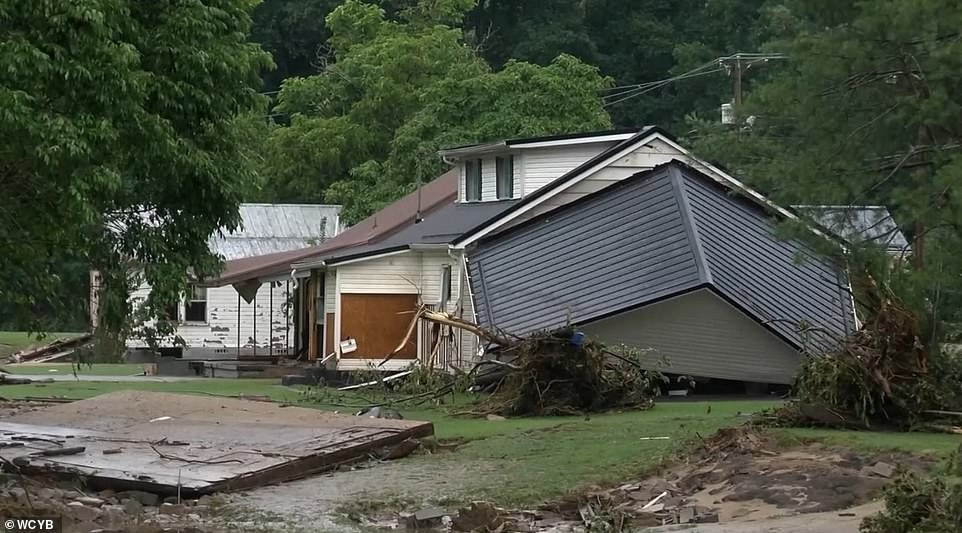 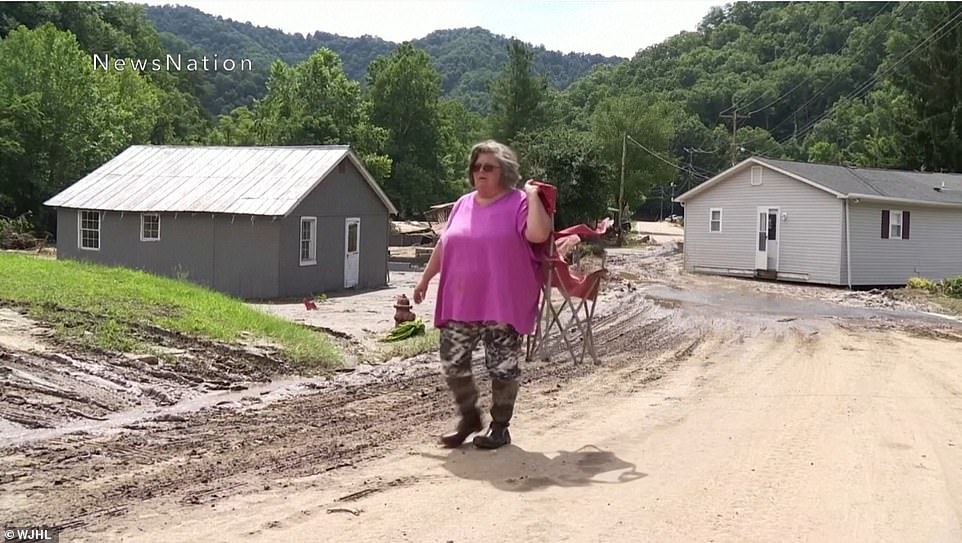 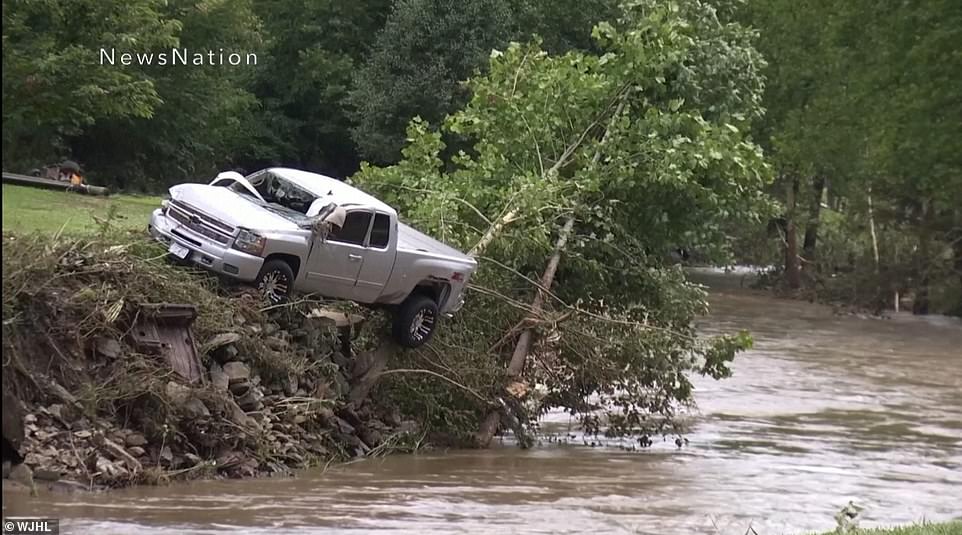 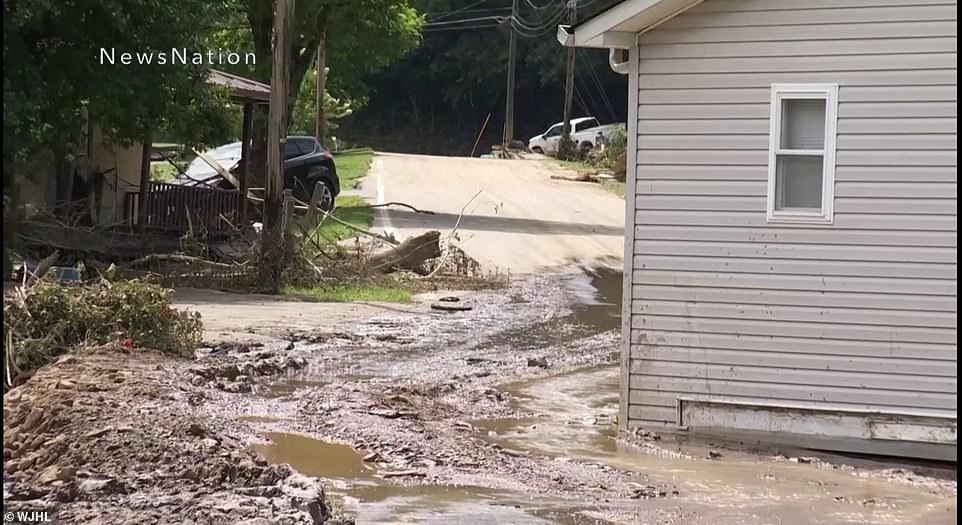 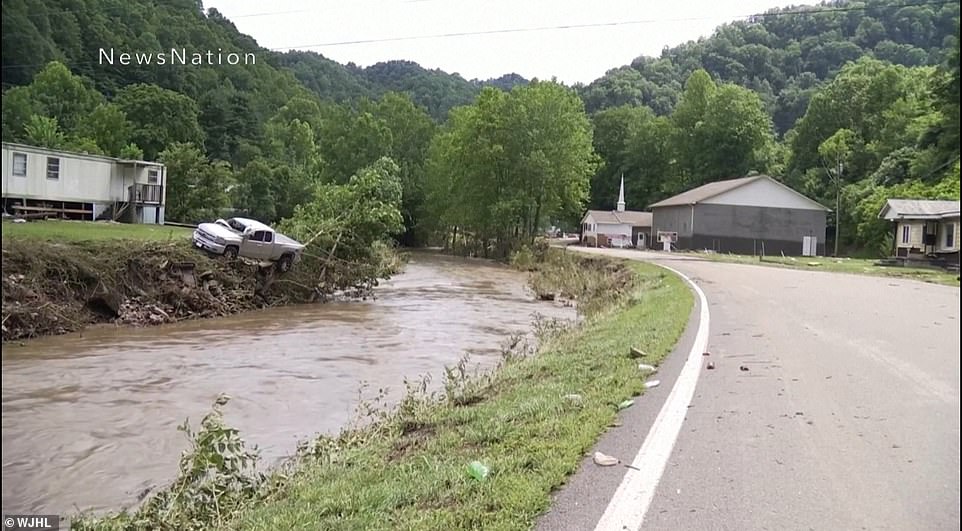 Officials estimate that more than 100 homes in Buchanan County, Virginia were destroyed in the widespread flooding 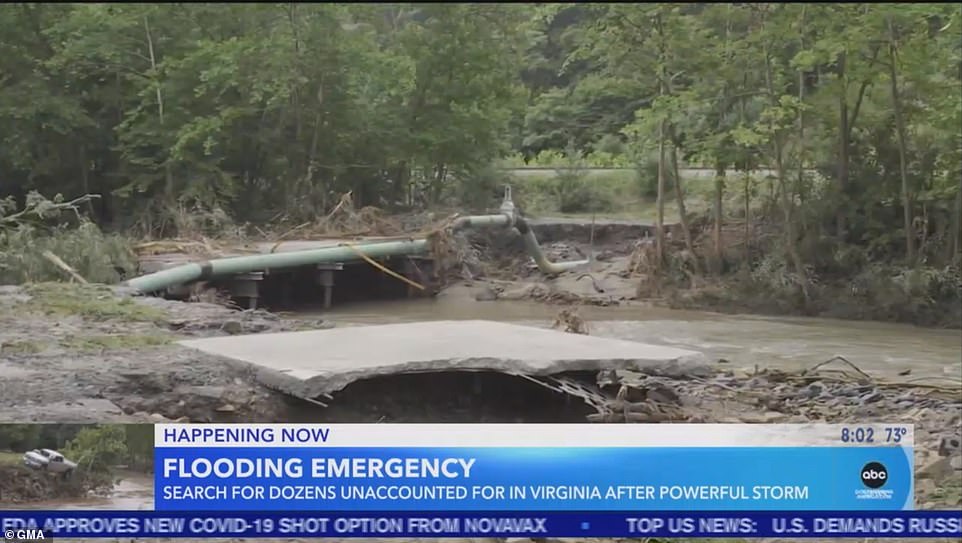 The Buchanan County Sheriff’s Office says the 44 people who are still unaccounted for may not actually be missing.

In a Facebook post Wednesday night, it clarified: ‘This number reflects the number of people that has been reported to law enforcement by loved ones and family members as being unable to make contact with them.

‘This does not mean the person is missing, it means we are attempting to reach and locate the person and check on their wellbeing.’

‘At this time, we have no confirmed fatalities.’

The floods serve as some of the worst seen in the area in decades, and rescue officials are still struggling to assess the full extent of the damage as photos show bridges washed away and cars stacked up on each other.

‘A lot of roadways are blocked by landslides,’ Billy Chrimes, a search and rescue specialist from the Virginia Department of Emergency Management said at a news conference Wednesday, adding that ‘bridges are washed out.

‘It’s going to take time for that access to be restored, make contact with everyone and make sure they have their basic needs taken care of.’

Meanwhile, Gov. Glenn Youngkin declared a state of emergency to assist with response and recovery efforts. 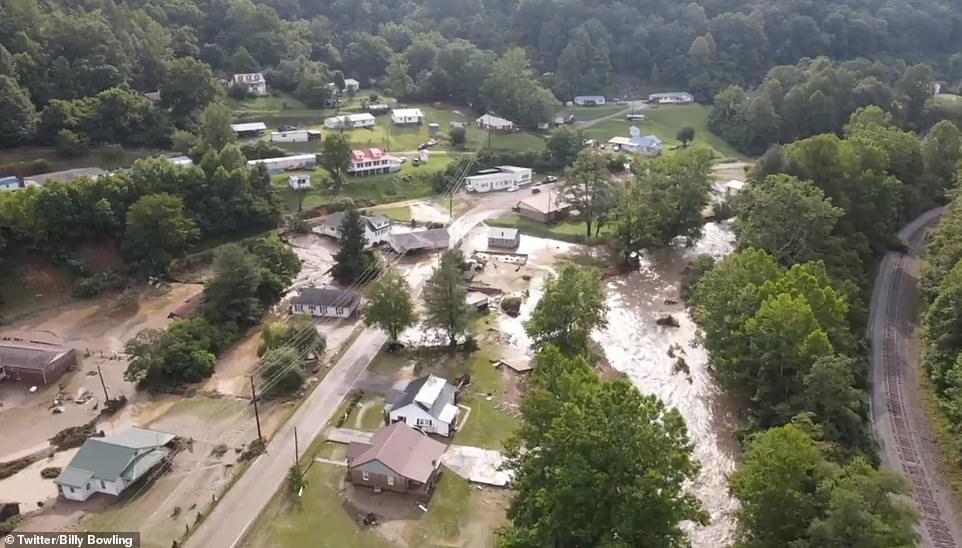 Virginia has declared a state of emergency after more than 100 homes were damaged and dozens are unaccounted for after severe flash flooding ravaged several parts of the state overnight. Pictured is an aerial view of the flooding in the town of Pilgrim’s Knob 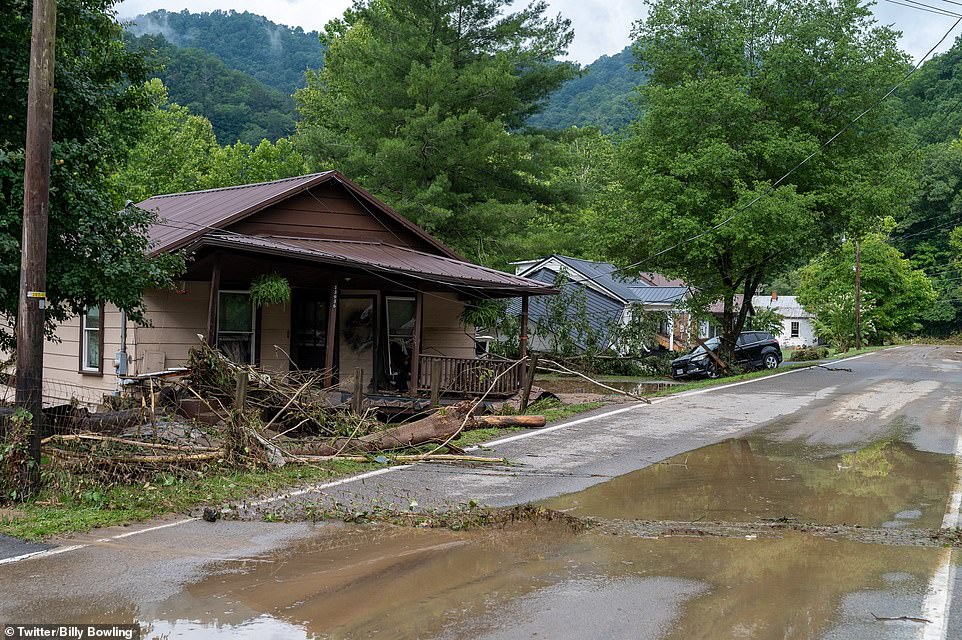 The flooding, which transpired late Tuesday, has left several families without a home and many without power – on a day where temperatures hit 93 degrees 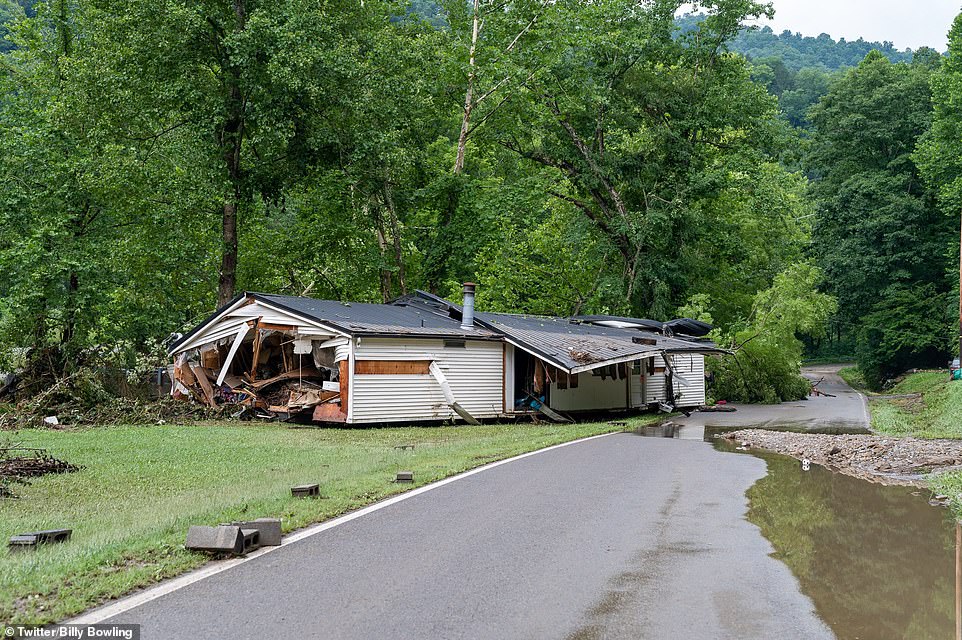 The Dismal River area, set in the western part of the state, was particularly devastated by the storms, with homes washed hundreds of yards off their foundations into stretches of road

‘I want Virginians in Buchanan County to know that we are making every resource available to help those impacted by this storm,’ the governor said in a statement.

‘As we continue to assess the situation, I want to thank our first responders and the personnel on the ground for providing assistance with our ongoing operations.’

The governor – who assumed office in January – took to Twitter to urge citizens that the state was doing all it could to help residents in hard-hit areas, particularly in Buchanan County, which borders West Virginia and Kentucky.

‘I am deeply saddened at the devastating news of flooding in Buchanan County. We are making every resource available to help those impacted,’ Youngkin, 55, wrote.

‘While rescue and recovery operations continue, please join me in prayer as we lift up our fellow Virginians impacted by this tragedy.’ 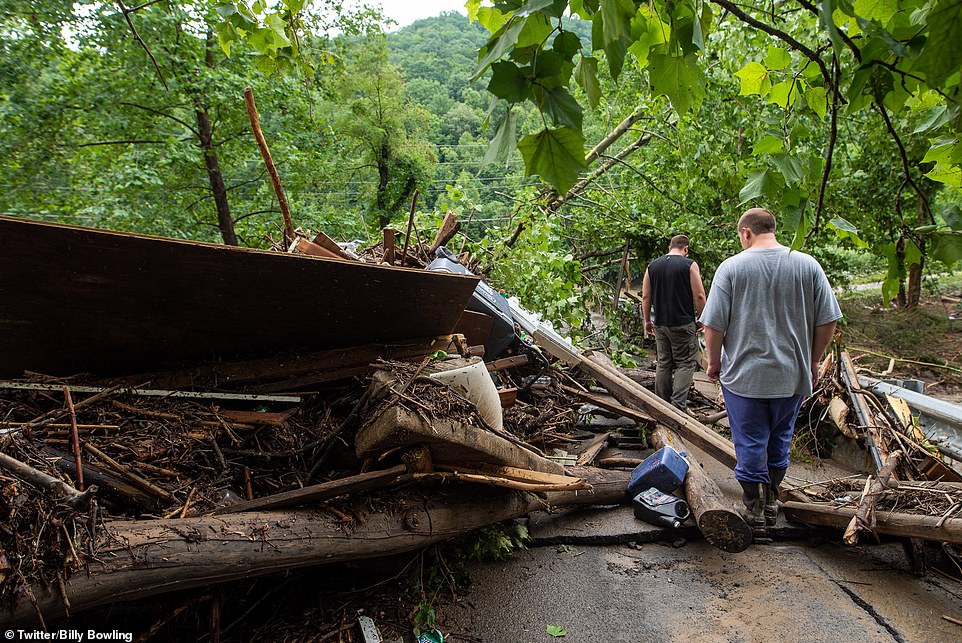 The floods serve as some of the worst seen in the area in decades, and rescue officials are still struggling to assess the full extent of the damages 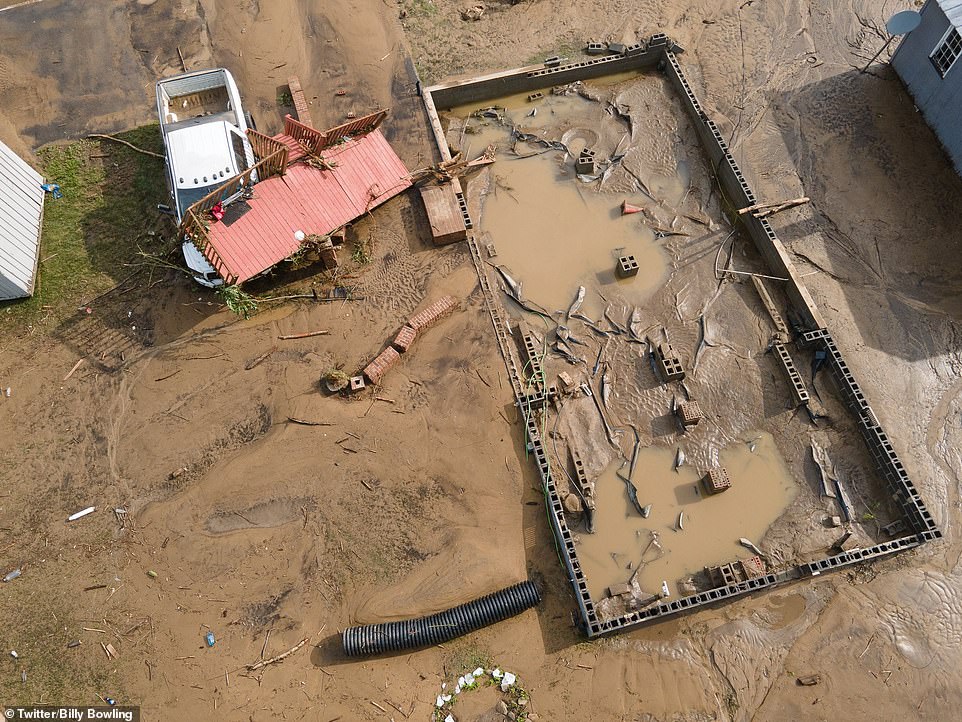 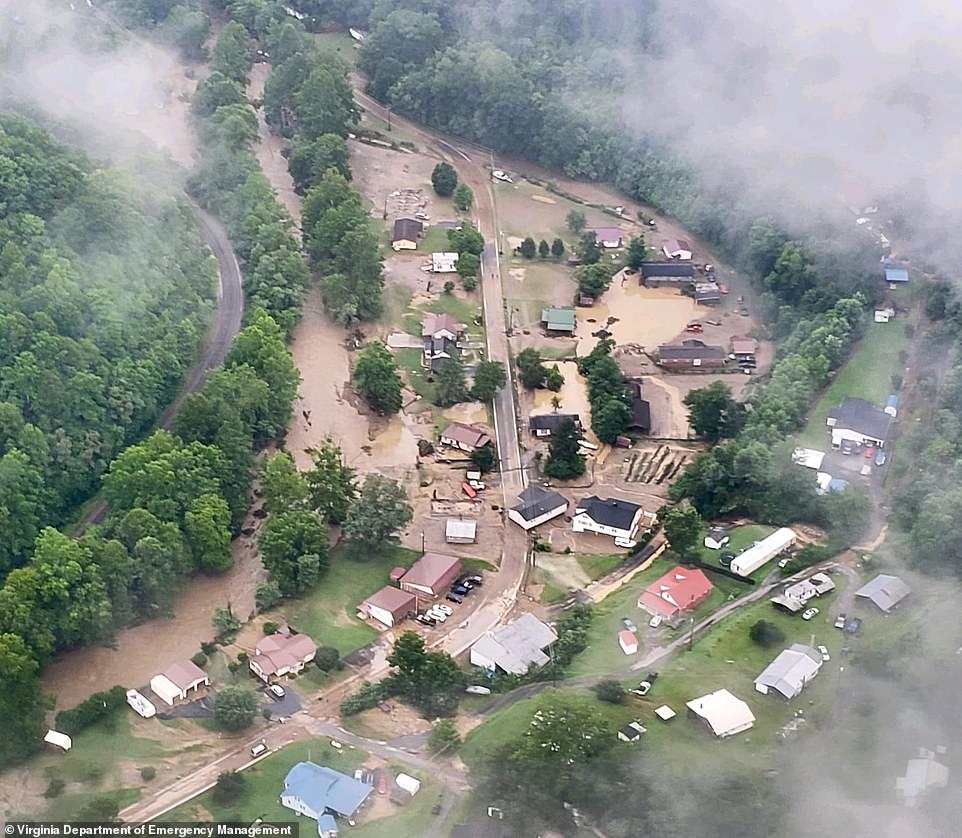 More than 40 people have been declared missing as of Wednesday afternoon. Officials have yet to report any casualties

Those who could escaped the neighborhood at around midnight on Wednesday, and soon an emergency shelter was set up at Twin Valley Elementary/Middle School as water levels reached 11-and-a-half feet.

Resident Seth Owens telling WCBY said he was ‘sitting at the post office over here, and the next thing you know, the house is floating on down through there.

‘We thought it was going to wash off,’ he said. ‘Two of the houses washed off.’

‘Some of them snapped, some slid across other roads,’ Fragoso said, adding: ‘There’s some trees collapsed into cars.’

In total, officials estimate more than 100 homes in Buchanan County were destroyed in the flooding. 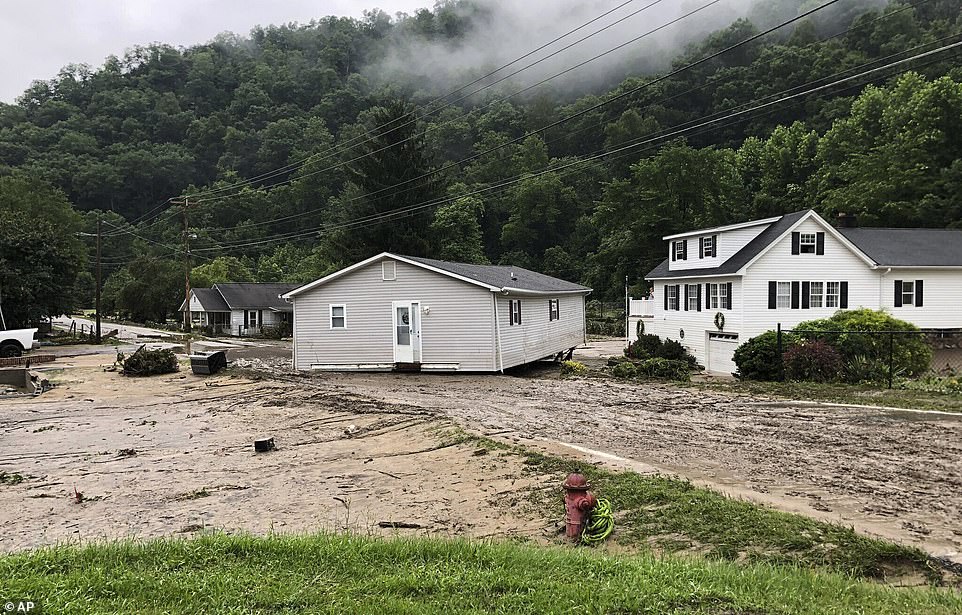 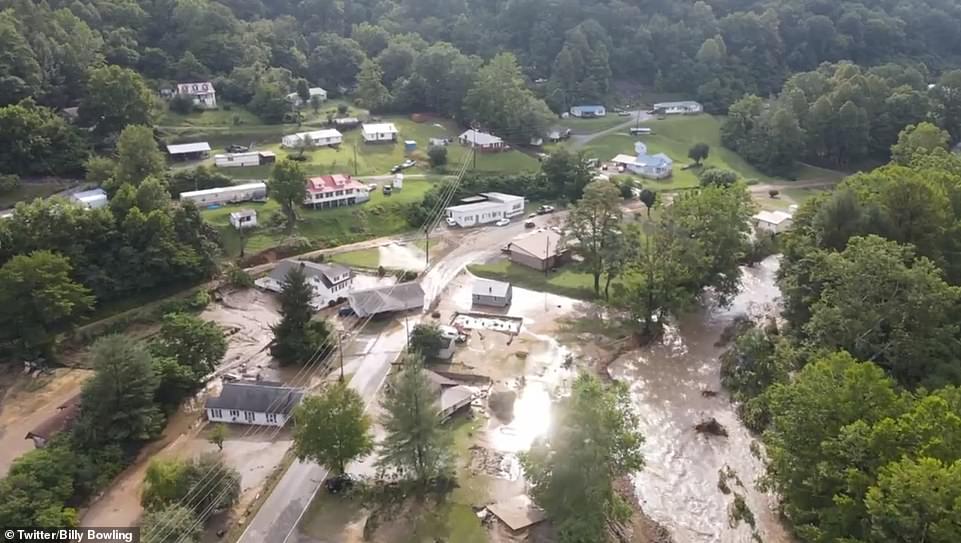 Officials are working to clean up and assess the damages. State officials said they will continue to aid in those efforts as well. More rain is forecast in the area over the weekend

State officials from the Virginia Department of Emergency Management (VDEM) have since been deployed to assist local crews in clean-up and rescue operations.

Officials from the agency said Wednesday they estimate that more than 100 homes were damaged in the devastating storm.

Rescue officials have also reported that several of the homes were ripped from their foundations, in some cases up to 300 yards from their original position.

Pavement was also stripped in some areas, and several roads and bridges are still unpassable.

Cars and trucks were also strewn all over by the raging waters, leaving towns like Pilgrim’s Knob, set in Buchanan County, looking like a warzone.

Still, state officials say the damage is not as bad as it was last year when Hurricane Ida swept through the area.

Officials are now working to clean up and assess the damages. State officials said they will continue to aid in those efforts as well, but more rain is forecast in the area over the weekend. 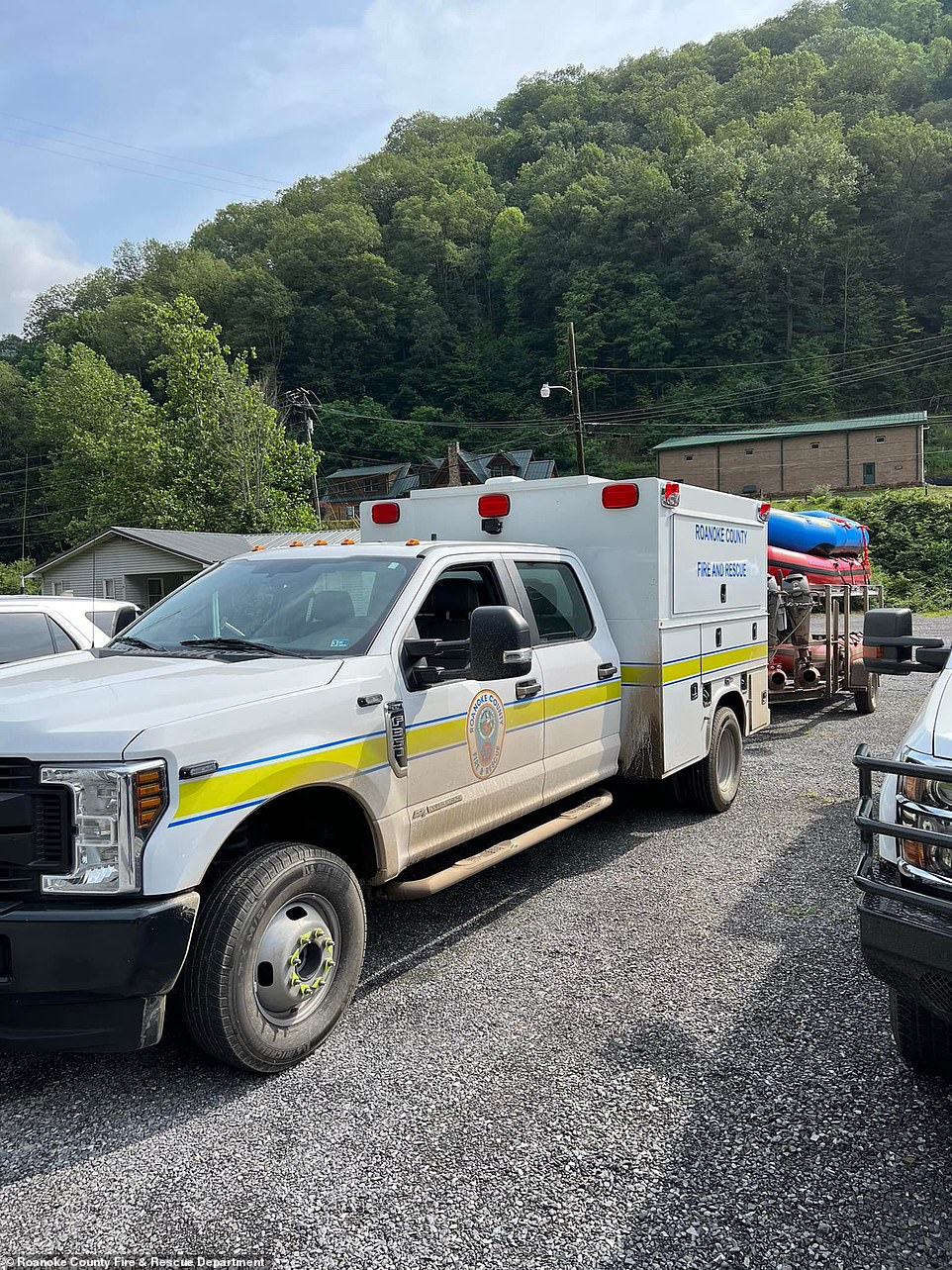 ‘As we continue to assess the situation, I want to thank our first responders and the personnel on the ground for providing assistance with our ongoing operations,’ Gov. Glenn Youngkin said 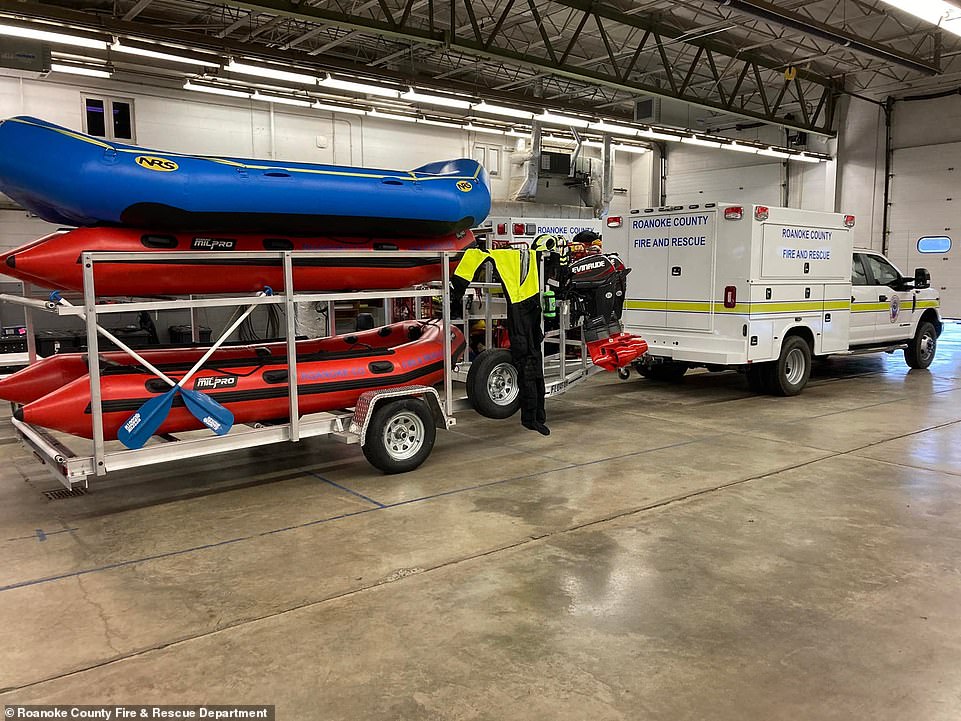 The storm also hit nearby Greenbrier Campground in Gatlinburg, Tennessee, where more than 400 people were evacuated on Wednesday after more than eight inches of rain fell.

Perrin Anderson, assistant mayor for governmental affairs in Sevier County told CNN: ‘Debris and vehicles washed downstream in the Middle Prong of the Little Pigeon River from the campground.’

No injuries were reported in the area.