Former England cricket captain Sir Andrew Strauss has struck up a close friendship with a marketing executive following the death of his wife Ruth from a rare form of lung cancer.

Strauss, 45, was pictured cuddling up to his blonde companion and stroking her hair as they watched the Centre Court action in front of other spectators at the Wimbledon tennis championships last month.

MailOnline can now reveal that she is Antonia Laing, 34, who works in strategic event marketing for investment bank JP Morgan Chase & Co, covering Europe, Middle East and Africa, according to her LinkedIn profile.

Strauss told of his ‘great sadness and immense grief’ after his beloved Australian wife of 15 years, Ruth, who was the mother of his two sons, Sam and Luca, now aged 16 and 13, respectively, died aged 46 in the final days of 2018.

Diagnosed with a rare form of lung cancer in December 2017, Ruth’s death sparked an outpouring of support and tributes from celebrities and stars of the cricket world. 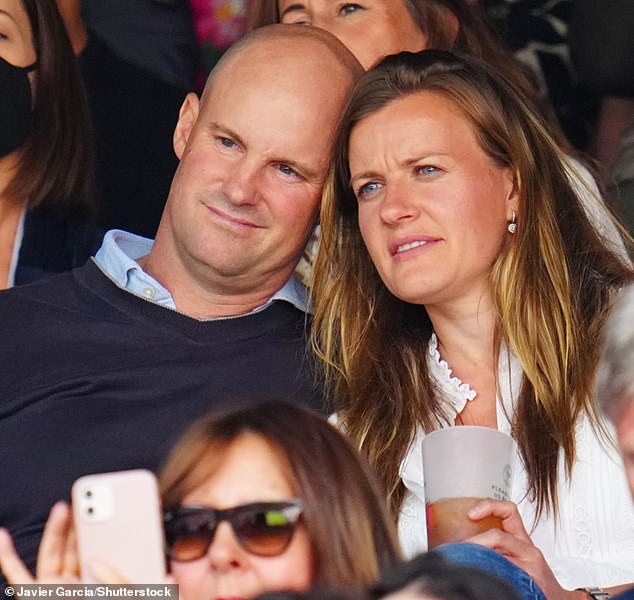 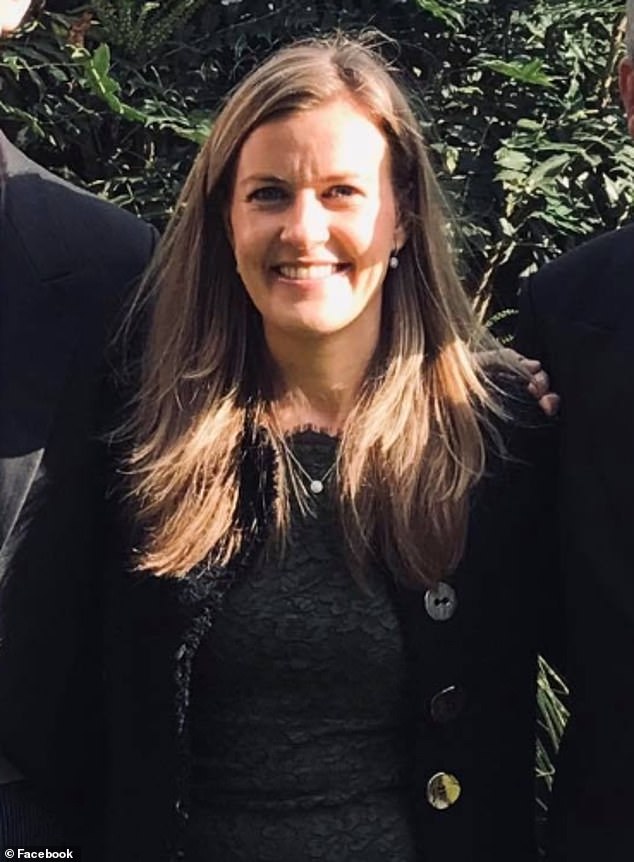 MailOnline can now reveal that she is Antonia Laing (pictured), 34, who works in strategic event marketing for investment bank JP Morgan Chase & Co, covering Europe, Middle East and Africa, according to her LinkedIn profile 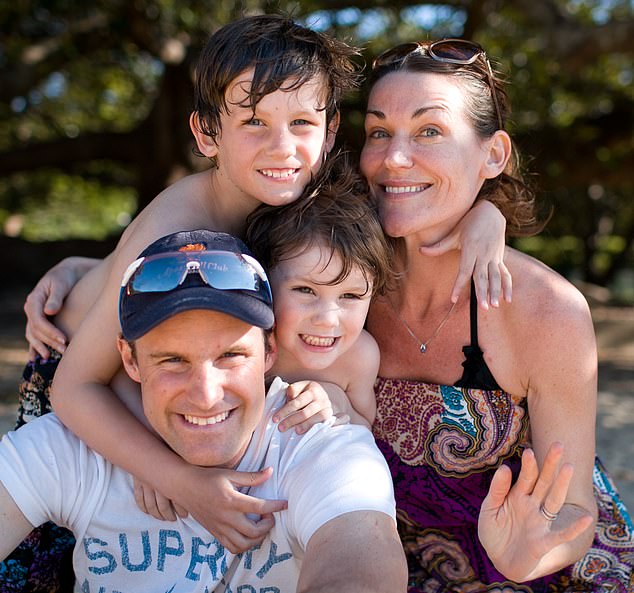 Strauss told of his ‘great sadness and immense grief’ after his beloved Australian wife of 15 years, Ruth, who was the mother of his two sons, Sam and Luca, now aged 16 and 13, respectively, died aged 46 in the final days of 2018

Strauss, who at the time of his wife’s death said he would ‘miss her terribly’, appeared at SW19 this year alongside new friend Antonia Laing.

He looked smart in a navy jumper, teamed with a light blue shirt, while she opted for a white blouse with ruffle detailing.

Adding a touch of glitz to her ensemble, Antonia donned a pair of dainty drop earrings and completed her look with a smattering of simple, yet glamorous makeup.

A week after attending Wimbledon with his new friend, the South Africa-born cricketer appeared at the tennis event with his eldest son, Sam.

Strauss declined to comment on his friendship with Antonia when approached by MailOnline.

The father-of-two was director of England cricket – and was in Australia for the men’s Ashes tour – when Ruth first fell ill around a year before her death. 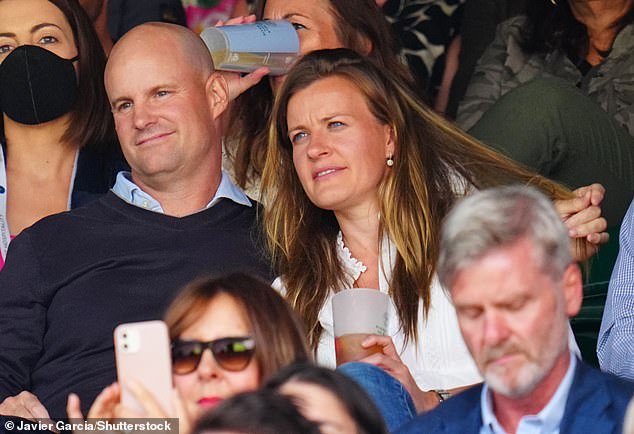 Strauss, 45, was pictured cuddling up to his blonde companion and stroking her hair as they watched the Centre Court action in front of other spectators at the Wimbledon tennis championships last month 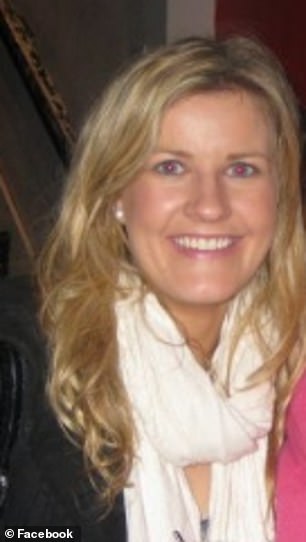 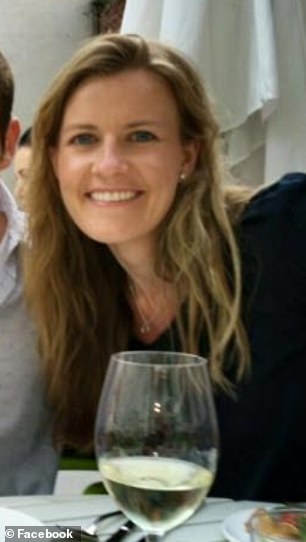 Strauss, who at the time of his wife’s death said he would ‘miss her terribly’, appeared at SW19 this year alongside new friend Antonia Laing

He returned home in the middle of the series, and stepped down from his position five months later as she started a new and more challenging course of treatment to battle the rare ALK-positive non-small-cell lung cancer.

In a statement following her death, he said: ‘It is with great sadness and immense grief that we have to announce that Ruth passed away today as a result of her rare lung cancer. Sam, Luca and I will miss her terribly.’

And added: ‘Anyone who has met Ruth will know how loving, caring and passionately protective she was of her family and it gives us huge comfort that she was in Australia, the land of her birth, surrounded by those who love her, in her final moments.

‘We would like to send our heartfelt thanks to those that have helped with her treatment over the last 12 months, in particular the wonderful team at University College Hospital in London. 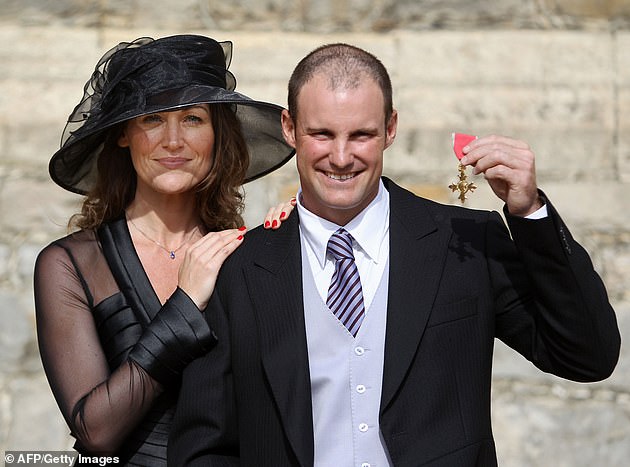 Strauss poses for photographs with his wife Ruth after receiving his Order of the British Empire (OBE) from Princess Anne at Windsor Castle, Berkshire, on October 4, 2011

‘Ruth desperately wanted to help those affected by this terrible disease and we will be launching a foundation in due course to raise much needed funds to aid research and also to offer support to patients and their families.’

Following her passing, the cricketing legend has battled to keep alive his wife’s memory and launched the Ruth Strauss Foundation in 2019.

The registered charity, which was suggested by Ruth before she died, works towards helping to provide emotional support for families to prepare for the death of a parent.

It also raises awareness of the need for more research and collaboration in the fight against non-smoking lung cancers.

Last month, the foundation staged a fundraising cricket match at the Wormsley estate in Buckinghamshire, featuring a Team Strauss against a Team Sheeran.

Although singer Ed Sheeran did not play himself, he performed at the event after his side was skippered by comedian Michael McIntyre. 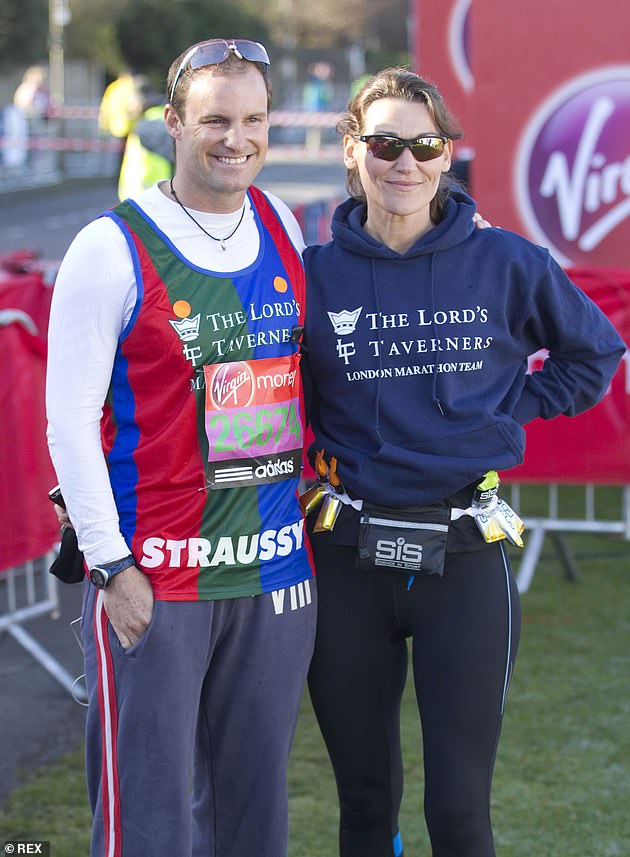 Strauss with wife Ruth before the start of the Virgin London Marathon 2013; the couple met in Sydney when he was 21 and she was 25 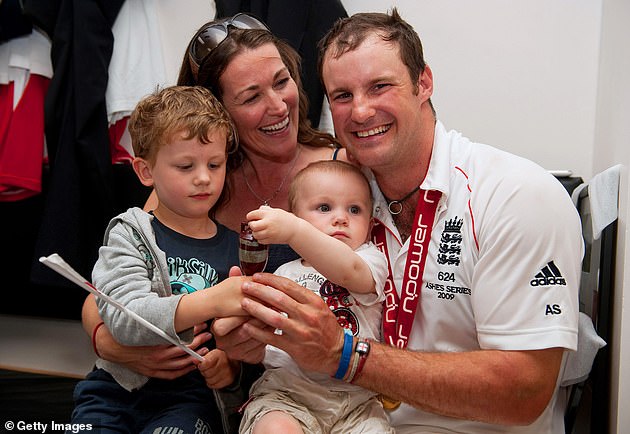 Strauss has also posted stunning pictures of Ruth on his Instagram account on what would have been her last three birthdays.

The most recent post in May this year featured a photo of her and one of their sons alongside a message accompanied by three hearts, saying: ‘Gone but never forgotten… Happy 50th birthday Ruth.’

Another poignant portrait of Ruth in December 2020 on the second anniversary of her death said: ‘The boys and I miss your gorgeous smile and colourful language so much.’

Strauss, who was famed for his prowess as a left-handed opening batsman, started playing county cricket for the Middlesex first team in 1998.

He met his wife in a bar in Sydney when she was a professional theatre actress, and he was spending winters in Australia playing club cricket.

The couple married in 2003 and settled in England, where Ruth continued to perform on the London theatre circuit for a while under her maiden name. 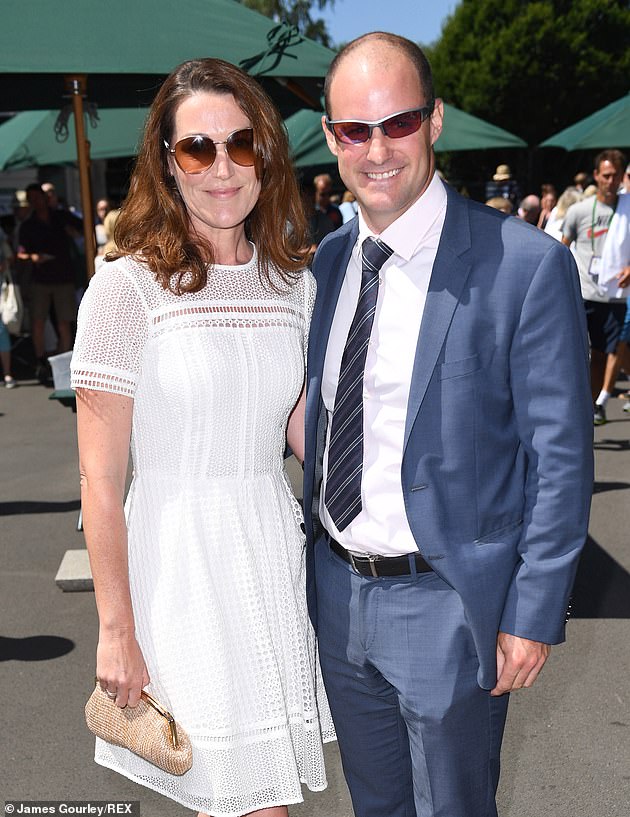 ‘Anyone who has met Ruth will know how loving, caring and passionately protective she was of her family,’ said Strauss (pictured with Ruth in 2017) in a statement after her death in December 2018

Strauss hit 112 and 83, earning himself the Man of the Match award, in his Test debut against New Zealand in 2004 after Michael Vaughan twisted his knee in the Lord’s nets.

He became only the fourth ever England batsman to score a century on his debut and was just 17 runs short of becoming the first to score two centuries in a debut match.

Strauss deputised for Michael Vaughan as England captain in 2006, and became permanent skipper for the 2008–09 tour of the West Indies after Kevin Pietersen’s quit.

He relinquished the Test captaincy and retired from playing professional cricket in August 2012, following his 100th test, which concluded a series defeat by South Africa.

Strauss became the England and Wales Cricket Board’s director of cricket in 2015 before quitting to spend more time with his wife as she battled cancer.

WHAT IS LUNG CANCER?

Lung cancer is one of the most common and serious types of cancer.

Around 47,000 people are diagnosed with the condition every year in the UK.

There are usually no signs or symptoms in the early stages of lung cancer, but many people with the condition eventually develop symptoms including:

– an ache or pain when breathing or coughing

You should see a GP if you have these symptoms.

There are two main forms of primary lung cancer.

These are classified by the type of cells in which the cancer starts growing.

– Non-small-cell lung cancer. The most common form, accounting for more than 87 per cent of cases.

– The type of lung cancer you have determines which treatments are recommended.

More than four out of 10 people diagnosed with lung cancer in the UK are aged 75 and older.

Although people who have never smoked can develop lung cancer, smoking is the most common cause (accounting for about 72 per cent of cases).

This is because smoking involves regularly inhaling a number of different toxic substances.

Treatment depends on the type of mutation the cancer has, how far it’s spread and how good your general health is.

If the condition is diagnosed early and the cancerous cells are confined to a small area, surgery to remove the affected area of lung may be recommended.

If surgery is unsuitable due to your general health, radiotherapy to destroy the cancerous cells may be recommended instead.

If the cancer has spread too far for surgery or radiotherapy to be effective, chemotherapy is usually used.

There are also a number of medicines known as targeted therapies.

They target a specific change in or around the cancer cells that is helping them to grow.

Targeted therapies cannot cure lung cancer but they can slow its spread.