Spectacular photos show horseshoe crabs swimming, kicking up sediment and hiding entire ecosystems within their shells in protected area in the Philippines

Stunning new images of horseshoe crabs show the colorful sea creatures thriving in a marine protected portion of the Philippines.

The unique creatures, which can grow to between 14 and 19 inches depending on gender, have thrived in the ocean and survived all manner of cataclysmic events over the course of about 450 million years.

Laurent Ballesta, a marine biologist and wildlife photographer, took the dazzling photographs for the August 2022 issue of National Geographic. 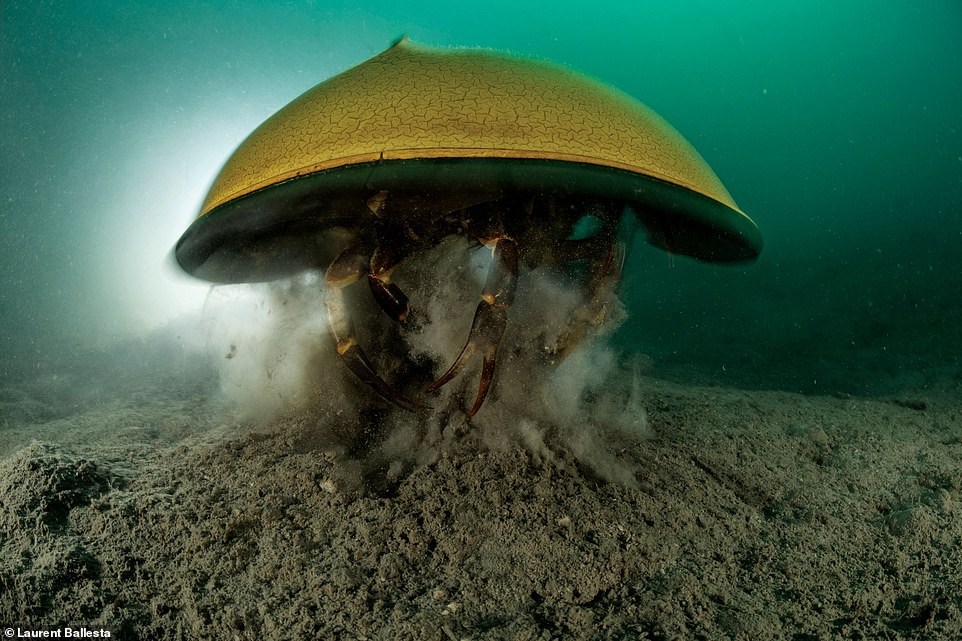 Horseshoe crabs are dealing with overfishing and coastal development. Pictured above is a tri-spine horseshoe crab kicking up sediment along the muddy bottom of the Pangatalan Island Marine Protected Area in the Philippines. After a decade of restoration work to the islet’s bay, itsgreen waters are rich with plankton and ready to welcome back bigger animals

Sadly, they’re now facing some of the same perils of modern life that other species have dealt with: overfishing and coastal development.

Less known is the fact that horseshoe crabs are collected for their blue blood, which contains a clotting agent used in the development of safe vaccines – including the Covid-19 vaccines – which conservationists hope will translate to much stronger habitat protections.

That blood is critical for humans but its harvest often kills off the creatures.

Tri-spine horseshoe crabs have lost more than half their population in the past 60 years. 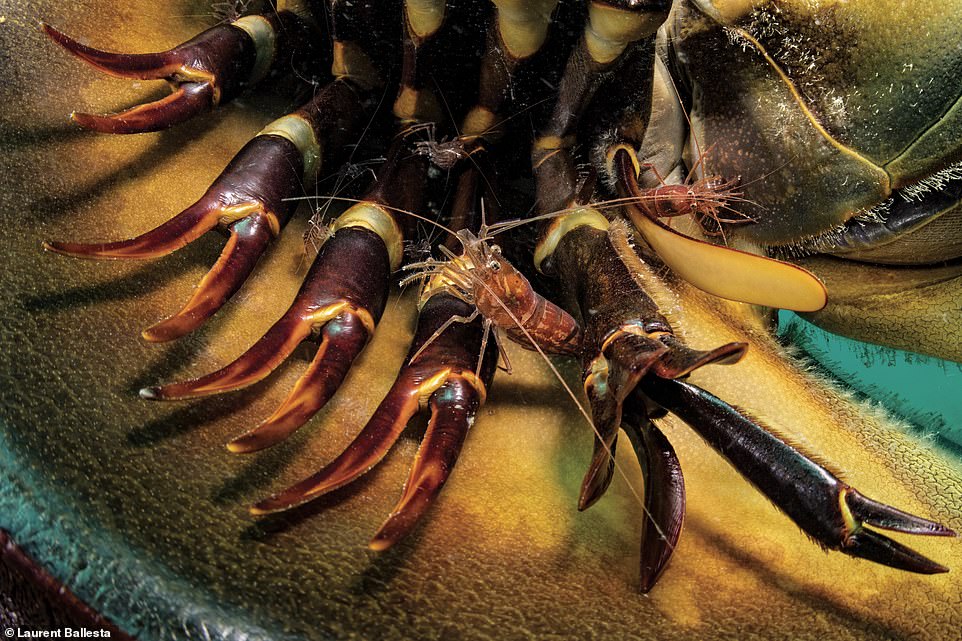 Horseshoe crabs have become a symbol of resilience on the Philippine islet of Pangatalan. Pictured is a horseshoe crab hiding an ecosystem within its shell. The hairlike objects along its body are hydroids – tiny, fuzzy invertebrates related to jellyfish -and there are at least eight shrimps clinging to the crab’s pincers. Horseshoe crabs are relatively unstudied; little is known about how they interact with other species

On the Philippine islet of Pangatalan, the species is a symbol of nature’s resilience.

For years the island’s 11 acres were reportedly destroyed: trees cut down for timber, mangroves burned for charcoal, and coral reefs overfished with dynamite and cyanide. 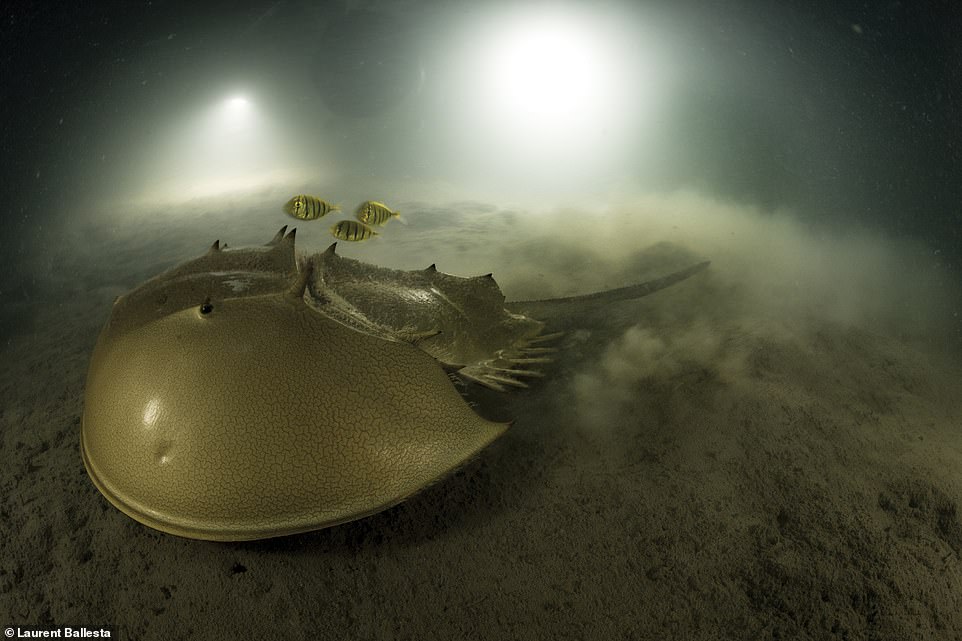 For many year’s the islet’s 11 acres were degraded. Pictured: Golden trevallies swim above a horseshoe crab, hoping to catch leftovers as it digs in the mud for clams and other prey. As bigger fish slowly return to the reef, horseshoe crabs may no longer rule the ecosystem

By 2011 these horseshoe crabs were among the largest creatures left.

Pangatalan is now a marine protected area and starting to prosper once again. 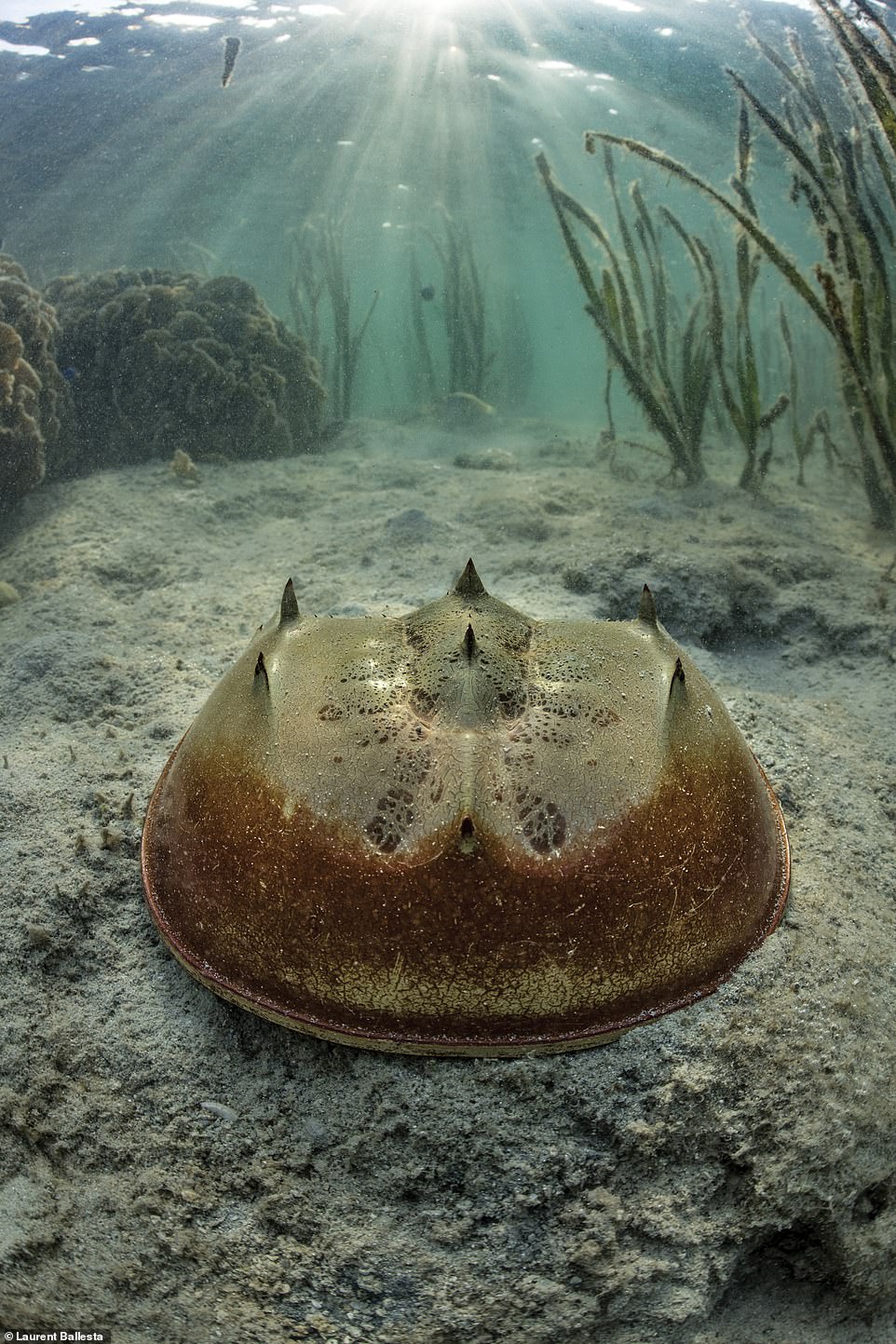 A tanklike horseshoe crab pushes itself across Pangatalan’s reef, which has benefited from the planting of mangroves and creation of artificial reefs. Members of the class Merostomata — which means ‘legs attached to the mouth’ — horseshoe crabs are more closely related to spiders and scorpions than to crustaceans

National Geographic reports that efforts to restore its reefs and plant thousands of trees have led numerous animals to return, including rare giant groupers.

Horseshoe crabs are not as well-known as other threatened species, but hopefully they’ll prompt more concern for all of nature’s creatures.

For more on this story, please visit National Geographic. 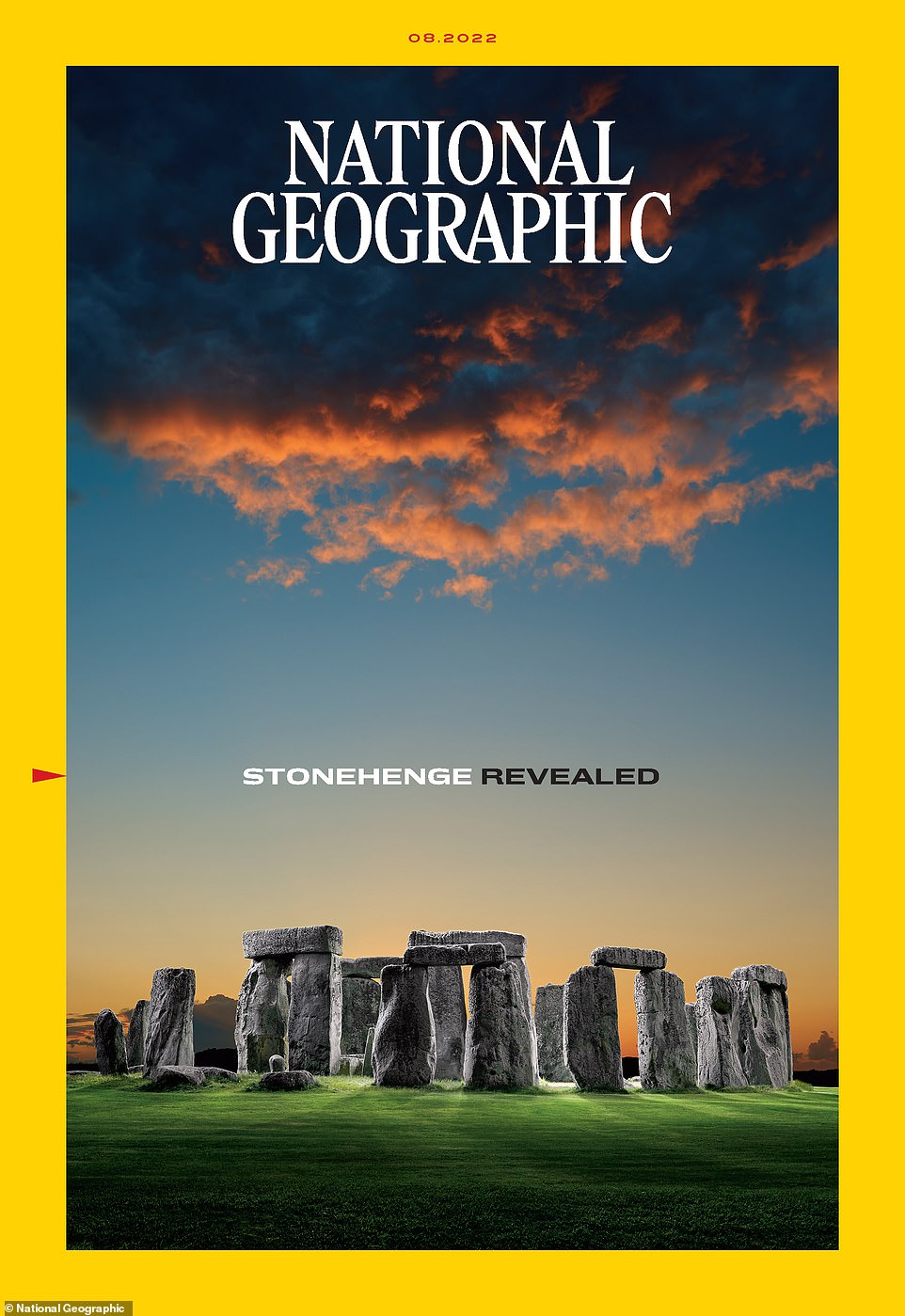 The dazzling images of horseshoe crabs were taken for National Geographic’s August issue, seen above

Inside Ivana Trump's heartbreaking final hours before being found dead