THE VIEW fans noticed a surprise detail in the background during the show’s most recent episode.

At the end of Thursday’s show, fans spotted a man walking in the corner of the set as The View host Whoopi Goldberg, 66, prepared to sign off.

The mystery man appeared to be part of the production crew as he was wearing all-black clothes and a face mask.

He appeared on screen for several seconds but his presence went unnoticed by Whoopi and her co-hosts.

However, some viewers took note of the man in the background. 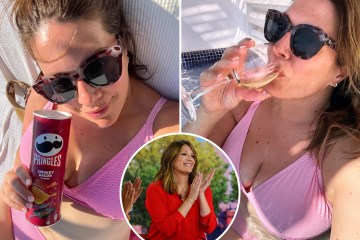 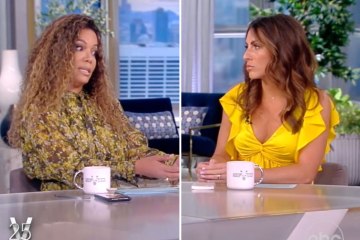 “Who’s this dude?” asked one on Twitter, using #TheView.

Another posted: “Now, wait, did this dude just walk in on the set? Hilarious!”

The ladies of The View are now back in New York City following a trip to the Bahamas to celebrate 25 seasons of the daytime show.

Joy Behar, 79, has been absent for the last three days, and until today, fans had been left in the dark as to why she is been missing.

Whoopi only half solved the mystery as she told viewers: “Joy is not out with Covid. She’s getting over something else, the flu, or maybe she’s pregnant, I don’t know.”

Fans took to Twitter to share their well wishes for Joy, with one telling her: “The show is not worth watching without you.”

Another chimed in: “Please come back to The View soon!”

Whoopi and co were instead joined on Thursday by guest co-hosts Chelsea Clinton, 42, and Alyssa Farrah Griffin, 33.

The later has been rumoured as a new permanent panellist.

Alyssa is the former communications director to president Donald Trump, and she could be joining the show full-time to take over the conservative seat from ex-panelist Meghan McCain.

Meanwhile, fans are calling for further line-up changes after the current season wraps up on August 5.

Many would like to see Whoopi quit, following controversial comments she made on air about the holocaust earlier this year.

The Emmy Award winner has also been slammed by viewers for making numerous on-air blunders in recent weeks.