Arachnophobes look away now; engineers have found a way to turn dead spiders into mechanical gripping robots straight out of your nightmares.

Researchers from Rice University in Texas pumped wolf spider cadavers with air to get their legs to unfurl and clasp around objects.

They discovered that the arachnid grippers were able to lift 130 per cent of their own body weight, and can manipulate circuit boards to turn off LED lights.

It is hoped the delicate tools could be used in microelectronics, or for capturing small insects to study.

Daniel Preston, assistant professor in mechanical engineering, said: ‘It happens to be the case that the spider, after it’s deceased, is the perfect architecture for small scale, naturally derived grippers.

‘It’s something that hasn’t been used before but has a lot of potential.’

Rice University mechanical engineers have found a way to convert the bodies of deceased spiders into necrobotic grippers. Pictured is a gripper being used to lift a jumper and break a circuit to turn off an LED. The team hope the gripper could be useful in microelectronics 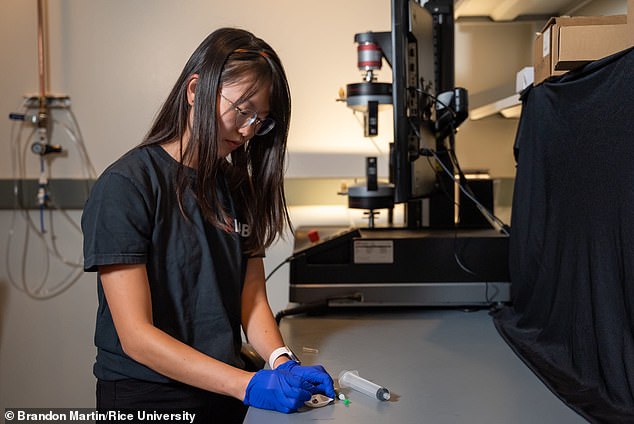 The mechanical engineers at Rice University were inspired after coming across curled up spiders while moving things about in their laboratory. Lead author Faye Yap (pictured) wanted to find out why it was that the arachnids’ legs curl inwards after they die

HOW DOES THE GRIPPER WORK?

The engineers first inserted a needle into the dead spider’s prosoma, and secured it with superglue.

The other end of the needle was connected to one of the lab’s test rigs or a handheld syringe, which delivered a minute amount of air to the legs.

The pressure caused them to unfurl, and when the pressure is released the legs clasp around an object.

The mechanical engineers at the Houston-based institution were inspired after coming across curled up spiders while moving things about in their laboratory.

Lead author Faye Yap wanted to find out why it was that spiders’ legs curl inwards after they die.

She said: ‘Spiders do not have antagonistic muscle pairs, like biceps and triceps in humans

‘They only have flexor muscles, which allow their legs to curl in, and they extend them outward by hydraulic pressure.’

Internal valves in the spiders’ hydraulic chamber, or prosoma, sends blood to their limbs and forces them to extend, and when that pressure is relieved they contract.

Yap added: ‘When they die, they lose the ability to actively pressurise their bodies. That’s why they curl up.

‘At the time, we were thinking, ‘Oh, this is super interesting’, we wanted to find a way to leverage this mechanism.’

The valves allow the spider to control each leg individually, and were utilised by the researchers to move all the legs at the same time.

Engineers first tapped into the spider’s prosoma chamber with a needle, attaching it with a dab of superglue. The other end of the needle was connected to one of the lab’s test rigs or a handheld syringe, which delivered a minute amount of air to activate the legs almost instantly

Left: A scanning electron microscope image of the articular membrane of a spider’s patellofemoral joint, that has inspired the design of many soft flexible joints. Right: A hypodermic needle is inserted into the prosoma of the spider and sealed with glue

In a paper, published yesterday in Advanced Science, the team describe how they created the ‘necrobot’.

They first tapped into the prosoma chamber with a needle, attaching it with a dab of superglue.

The other end of the needle was connected to one of the lab’s test rigs or a handheld syringe, which delivered a minute amount of air to activate the legs almost instantly.

The engineers had the grippers manipulate a circuit board, move objects and even lift another spider.

They were also found to be fairly robust, as they could go through 1,000 open-close cycles before experiencing any wear and tear.

Preston said: ‘We think that’s related to issues with dehydration of the joints. We think we can overcome that by applying polymeric coatings.’ 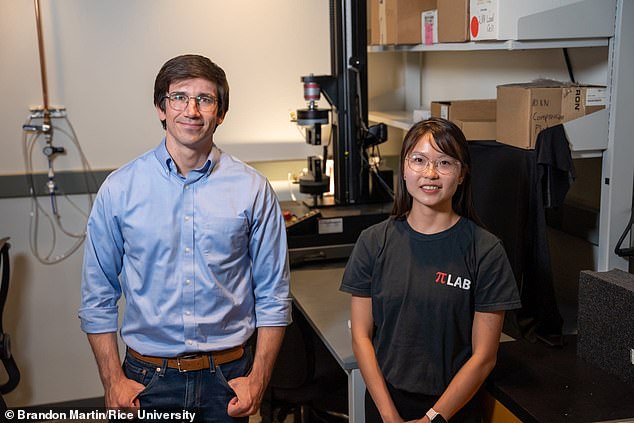 Daniel Preston (left) and Faye Yap (right) hope that their spider gripper will open the door to a new area of robotics they are calling ‘necrobotics’, which will have real-world applications

The team hope that their spider gripper will open the door to a new area of robotics they are calling ‘necrobotics’, which will have real-world applications.

Preston said: ‘There are a lot of pick-and-place tasks we could look into, repetitive tasks like sorting or moving objects around at these small scales, and maybe even things like assembly of microelectronics.’

Yap added: ‘Another application could be deploying it to capture smaller insects in nature, because it’s inherently camouflaged.’

The spiders themselves are also biodegradable, so their necrobots do not introduce a big waste stream as is found with more traditional components and materials.

Future research will involve looking into creating similar grippers with smaller spiders, that can carry heavier loads in comparison to their body weight.

A fish-shaped robot that ‘swims’ around quickly picking up microplastics has been created by scientists.

The tiny machine ‘wiggles’ its body and ‘flaps’ its tail fins to move through water, and could be used to help clear the oceans of plastic pollution.

It measures just half-an-inch in length, meaning it can reach into tiny cracks and crevices to collect plastic pieces that would otherwise be inaccessible.

Developed by a team at the Sichuan University in China, the robot has no power source, but moves thanks to flashes of near-infrared light.