Volodymyr Zelensky and his wife have revealed that Russia’s savage invasion of Ukraine has brought them closer together and made their marriage even stronger.

The President and his First Lady, Olena Zelenska, told Piers Morgan on Talk TV they are now ‘more interested in each other’ as a result of the brutal war.

A trailer for the interview which airs tomorrow night shows the pair sitting down in Kyiv to discuss their strengthening relationship.

Morgan asks the couple: ‘These kinds of situations, they can make or break a marriage. Is your marriage stronger, do you think, because of what you’ve gone through?’

Zelenska replies: ‘I agree with the theory that marriage gets stronger with challenges. I think in our case it would be the same. 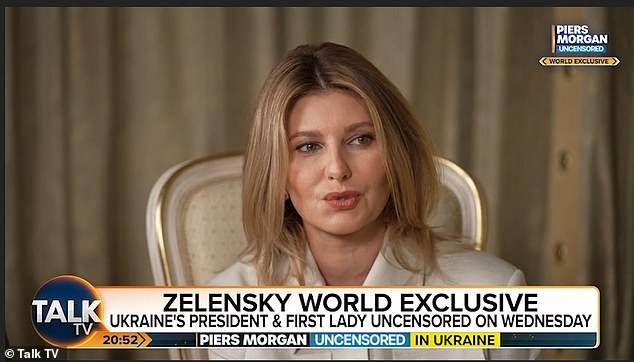 The President and his First Lady, Olena Zelenska, told Piers Morgan on Talk TV they are now ‘more interested in each other’ as a result of the brutal war 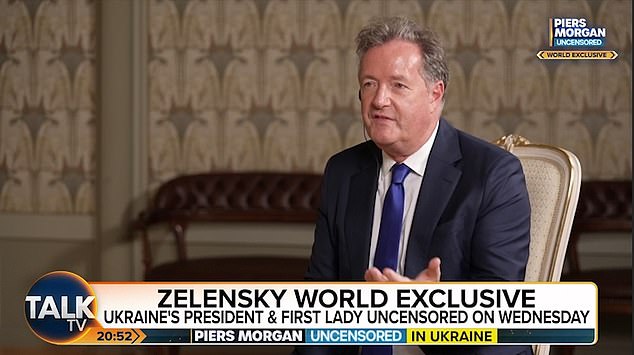 ‘We have become more interested in each other, I think in our case, it would be the same story.

‘We have got something else to say to each other, that is why I wish that this challenge can make us more united.’

The First Lady then turns to her husband who has been leading Ukraine’s incredible resistance against the invading forces for five months, asking him his opinion on their marriage.

His wife jokingly hits back: ‘You should have your own opinion about it.’

Laughing, the President then says: ‘When you are next to me, your opinion has priority! Zelenska said: ‘We have got something else to say to each other, that is why I wish that this challenge can make us more united’ 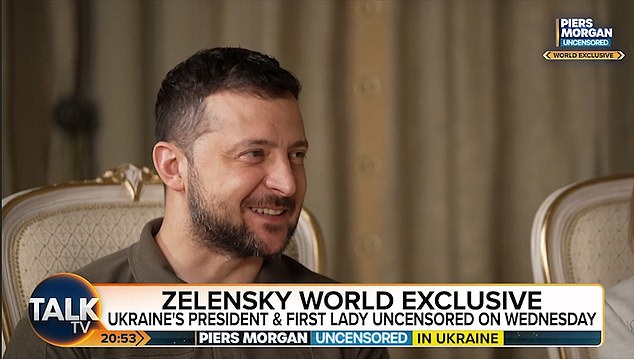 The Ukrainian President married Olena in 2003 and they have two children together, Kyrylo, nine and 18-year-old Oleksandra

‘But I would say, I don’t have any other experience, I’ve got only one wife and I am happy.’

Zelenska married her husband in 2003 and have two children together, Kyrylo, nine and 18-year-old Oleksandra.

She was sworn in as the First Lady of Ukraine after Zelensky was elected president in 2019.

Zelenska features on the cover of Vogue’s special digital cover and has reflected on her family life throughout Russia’s barbarism.

She said: ‘These have been the most horrible months of my life, and the lives of every Ukrainian. Frankly I don’t think anyone is aware of how we have managed emotionally.’

Her husband also discussed his family with the magazine, saying: ‘Like any ordinary man, I have been worried sick about them, about their safety. I didn’t want them to be put in danger. It’s not about romance. It’s about horrors that were happening here in Kyiv’s outskirts and all those horrors that are happening now in our country, in occupied territories. 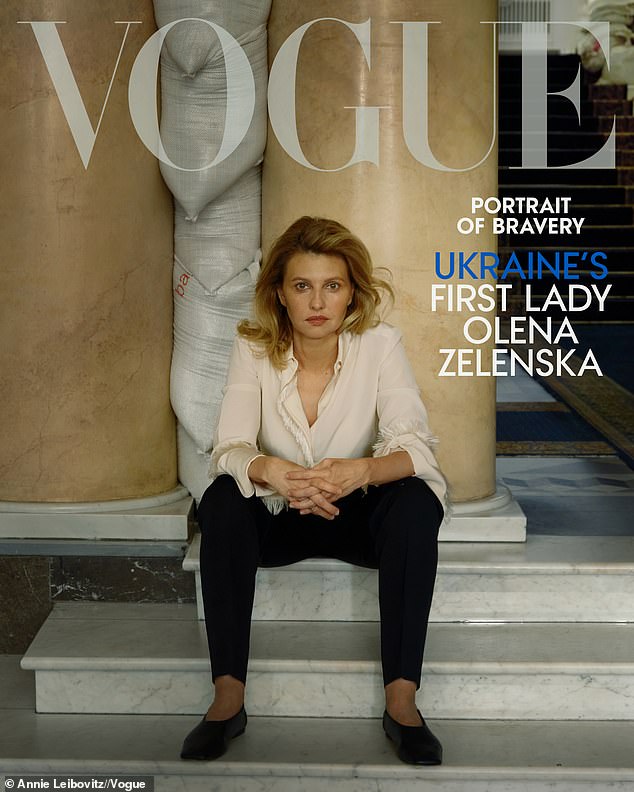 Her husband also discussed his family with the magazine, saying he has been ‘worried sick’ ‘But of course I’ve been missing them. I’ve wanted to hug them so much. I’ve wanted to be able to touch them. She has a strong personality to start with. And probably she is stronger than she thought she was. And this war—well, any war is probably bound to bring out qualities you never expected to have.’

Last week, she said the invasion of her country has stolen her son’s childhood, and Kyrylo now dreams of being a soldier when he’s older.

Speaking in an interview with NBC News on Wednesday, Zelenska said their young son has lost all interest in the hobbies that he enjoyed before the war began in February.

Through a translator, she told NBC’s Peter Alexander that she can’t get him back to ‘doing arts and humanities’. When asked what he wants to be when he grows up, Zelenska said: ‘Obviously he wants to be a soldier.’

Now, she said, that’s what all Ukrainian boys dream of. 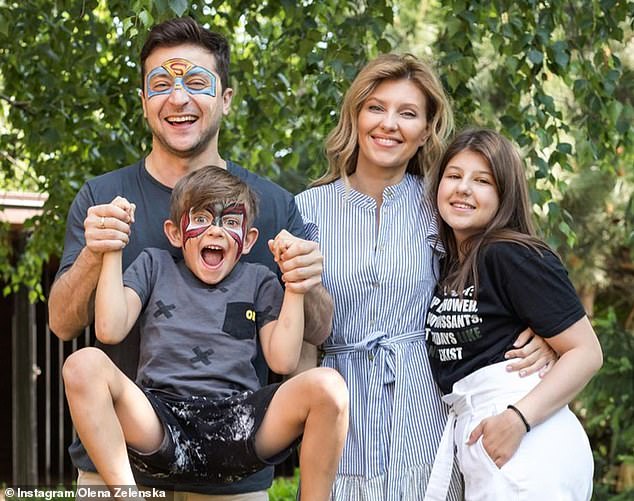 Pictured: Olena Zelenska with husband Volodymyr Zelensky and their children, Oleksandra and Kyrylo. When asked what her son wants to be when he grows up, Zelenska said: ‘Obviously he wants to be a soldier.’ Now, she said, that’s what all Ukrainian boys dream of 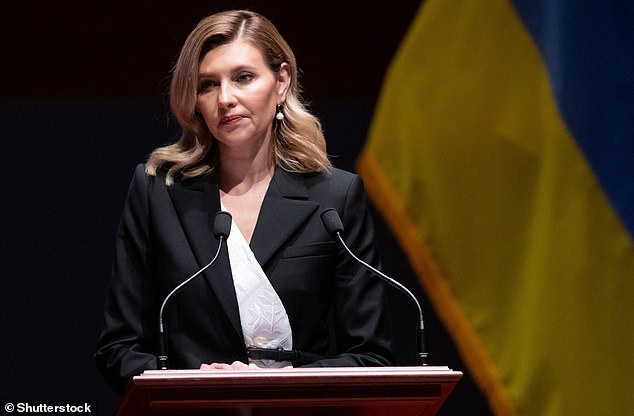 Last week, Zelenska visited America on a diplomatic mission to Washington to appeal directly to the U.S. Congress for more air defence systems

‘Before the war, my son used to go to the folk dance ensemble. He played piano. He learned English. He of course attended sports club,’ she said.

But after almost five months of Ukraine being at war with Russia, ‘the only thing he wants to [learn] is martial arts and how to use a rifle,’ she said.

Zelenska visited the US last week on a diplomatic mission to appeal directly to Congress for more air defence systems.

In an emotional speech, she appealed for the weapons systems to save ‘children in strollers’ from being killed by Russian rockets.

‘Those are Russia’s hunger games—hunting for peaceful people,’ Zelenska said as she displayed pictures of a three-year-old now using prosthetic limbs after being caught in one of Russia’s indiscriminate attacks.

‘They will never broadcast this on their news. That’s why I’m showing it to you here.

‘I want to address you not as a first lady but as a daughter and a mother,’ Zelenska said. ‘An unprovoked invasive terrorist war is being waged against my country.’ ‘Russia is destroying our people,’ she added. 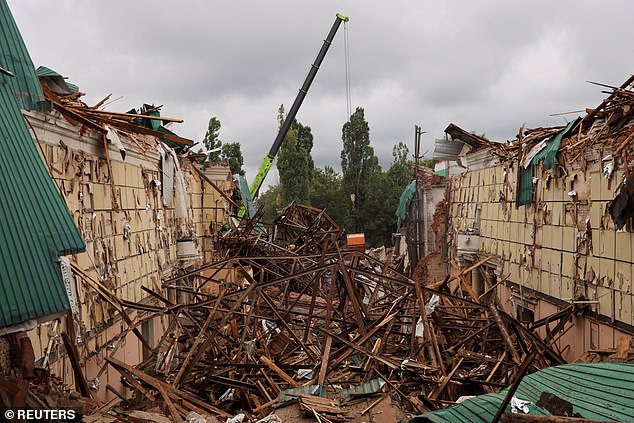 Rescuers remove debris to find bodies of people at the Central House of Culture, after a military strike hit a building in Kharkiv today 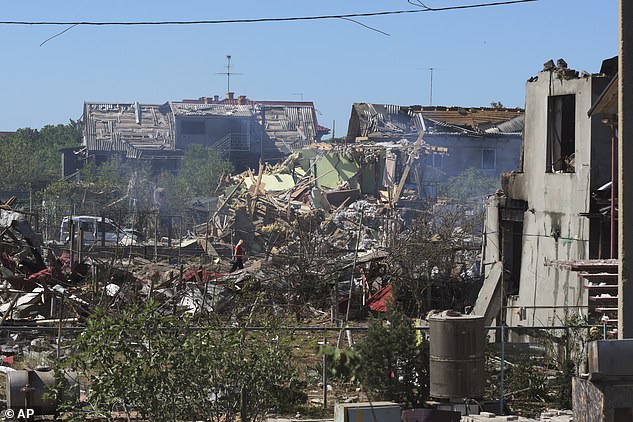 It comes as Russian forces today launched multiple missile strikes at targets on the Black Sea coast near the southern port city of Odessa and in Mykolaiv.

The attacks come days after Russian strikes hit the port of Odessa, calling into question a breakthrough deal to resume exports of grain from Ukraine, that have been disrupted by Moscow’s invasion.

‘A massive missile attack, with the use of aircraft, was launched from the Black Sea on the south of Ukraine,’ the country’s southern military command said on Facebook.

Rescuers were working on the ground near Odessa where ‘residential buildings’ near the coast were hit in the strikes, the military said.

Zelensky published a video showing debris scattered around heavily damaged houses in Zatoka, a popular resort village to the west of Odessa.

‘No military bases, no troops. Russian terrorists just wanted to shoot. They will be held accountable for all this,’ Zelensky said in an Instagram post. 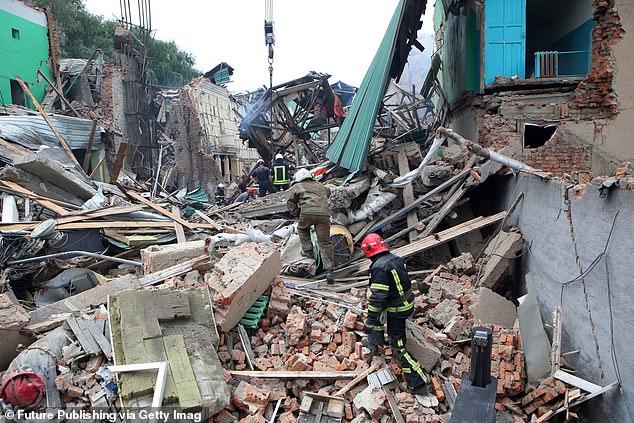 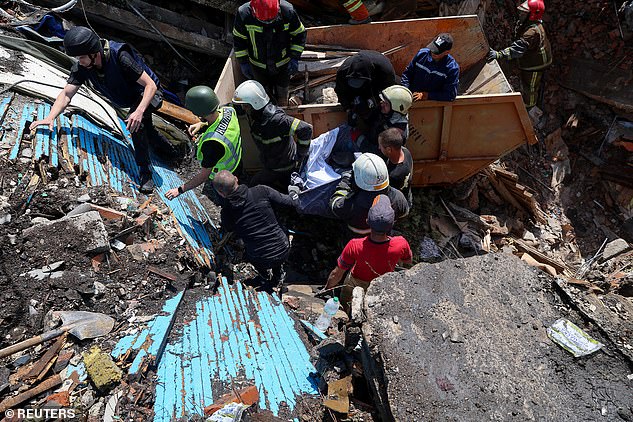 Odessa region official Sergiy Bratchuk told Ukrainian TV that ‘only one person’ was injured in the Zatoka attack. There were no casualties.

The military said that ‘port infrastructure’ was targeted in the neighbouring Mykolaiv region, which was also hit by S-300 missile systems deployed in the Russia-controlled Kherson region.

Governor Vitaliy Kim posted a video of the attack on the city of Mykolaiv, showing multiple explosions and clouds of black smoke rising from the ground.

‘A critical infrastructure object and a motor vehicle business were damaged,’ Kim said on Telegram.

The mayor of Mikolaiv, Oleksandr Sienkevych, said the city’s boiler facility had been damaged.

‘They destroyed three sections of an out-of-use railway bridge and other infrastructure facilities,’ Kim said, adding that there were no casualties.

Kyiv said on Monday it was still pushing on with preparations to restart exports and hoped to send the first ships out from one of three ports in the Odessa region this week.

Biden's doctor says president is back to excercising