Gas prices have soared today after Vladimir Putin further throttled supplies to Europe as revenge for sanctions that have crippled Russia over the war in Ukraine.

Prices in Europe have already soared to levels not seen since war broke out, and are climbing sharply amid fears the Kremlin could close the tap completely.

That has a knock-on effect on the UK, which buys gas from Europe, where prices have risen 7 per cent today and are now six times higher than they were in July 2021.

UK gas prices are soaring after Russia began throttling off supplies to Europe, causing a global shortage as EU leaders scramble for supplies 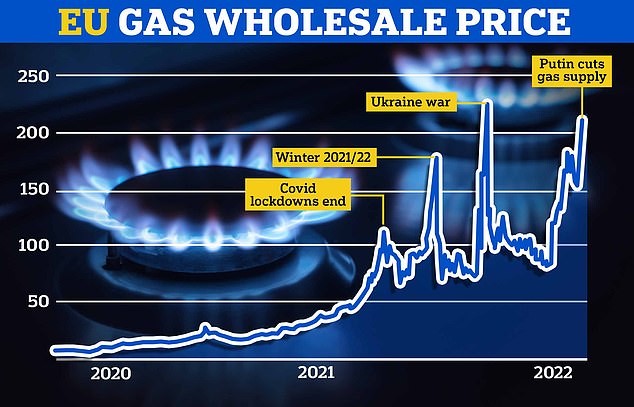 EU prices are at near-record levels amid fears Russia could soon turn off the gas tap completely, with leaders already discussing energy rationing

UK gas ‘spot market’ prices – meaning prices to get gas delivered today – are now $460 per therm, which is about the same level seen last December as costs soared amid an energy shortage in the wake of Covid.

But they are rising sharply, prompting consultants BFY to predict the average yearly household bill will soar to £3,850 from January – triple what it was in 2021.

That would mean the average household paying around £500 per month this winter.

Europe’s spot price is around $212 per megawatt hour – a much smaller unit than therms –  which is close to the record level it hit as the war broke out.

And costs are expected to keep rising as winter approaches and energy demand increases, with Germany already discussing rationing in order to get through.

European leaders yesterday struck a voluntary deal to cut gas use by 15 per cent this winter – an admission that there will not be enough to go around otherwise.

Germany, which is hugely reliant on Russian gas, will be worst-hit – with regional leaders already dimming street lights and shutting swimming pools to save energy. 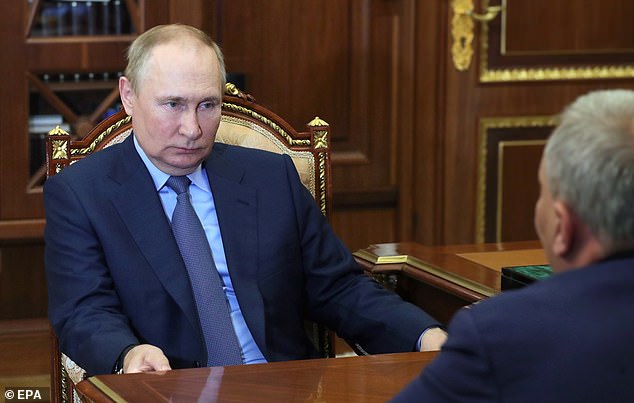 Putin is thought to be cutting gas as revenge for European leader defying him over the Ukraine war, but the move could backfire as his economy depends on money from sales

Klaus Müller, head of the federal energy network, has said that household bills couple triple ‘at least’ as a result.

The same is true of the UK, which imports just five per cent of its gas from Russia but still buys large amounts from overseas – primarily Norway, Qatar and the US.

With Russian supplies dwindling, EU nations are also turning to the same sources to shore up their own supplies, driving prices up.

And the UK has just a fraction of the gas storage facilities of similar-sized European nations – less than a tenth of Italy’s capacity, for example – meaning we are forced to buy at high prices rather than relying on cheap stored energy.

Putin began choking off Europe’s gas supply last month, when he cut the amount of gas flowing through the Nord Stream 1 pipe – the main supply route to Germany – to around 40 per cent capacity.

The pipe then closed for routine maintenance at the end of last month, sparking fears it may never reopen.

Thankfully those fears were not realised, but Russia has announced another cut in supply which is now down to just 20 per cent capacity. 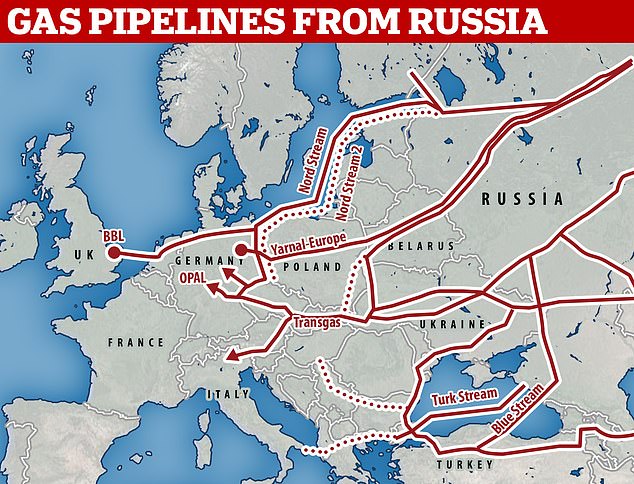 Russia has reduced flows through the Nord Stream 1 pipe which goes to Germany to just 20 per cent capacity, sparking panic

Officially, the Kremlin blames huge turbines which pump the gas – saying two have been taken offline for repairs.

But German experts have rubbished that reasoning, saying there is no technical explanation for the shortage.

European leaders are in little doubt that Putin is seeking to punish them for defying him over Ukraine, and is trying to break Western resolve as his war fails.

But the move could backfire, as the Kremlin is hugely reliant on revenues from its energy exports to keep the economy – already battered by sanctions – afloat.

America, which has warned for years that Europe is too reliant on Russian energy, is now desperately trying to help the continent go cold-turkey.

Amos Hochstein, Biden’s coordinator for global energy, was dispatched to Europe yesterday to help coordinate efforts to move away from Russia.

His itinerary includes trips to Paris and Brussels to discuss contingency planning with a US-EU energy task force created back in March, CNN reported.

Washington hopes weaning Europe off Russian fuel will cripple its old foe whilst also shoring up support for Ukraine.

Kourtney poses with $3.5K Prada bag inside closet of her $9M mansion 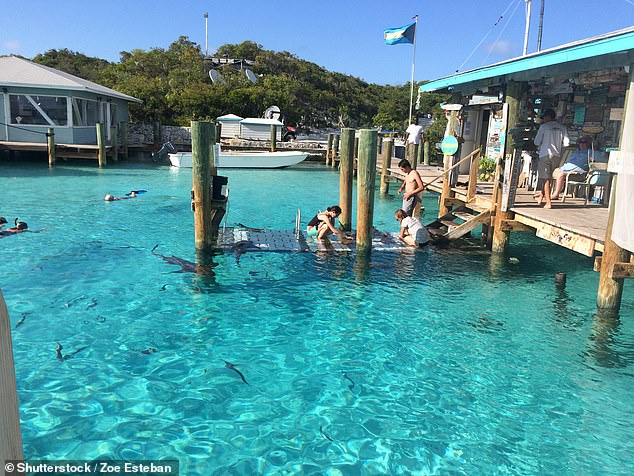 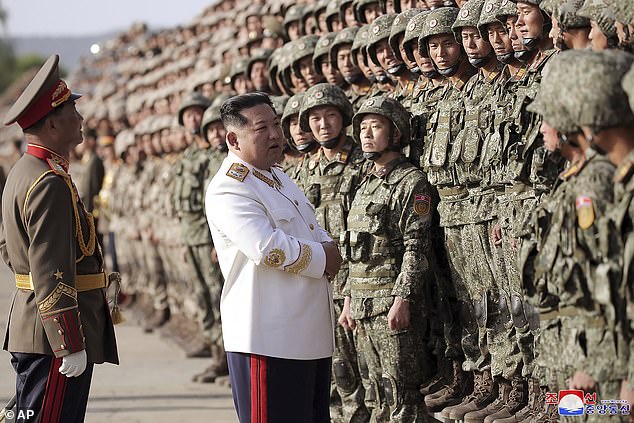 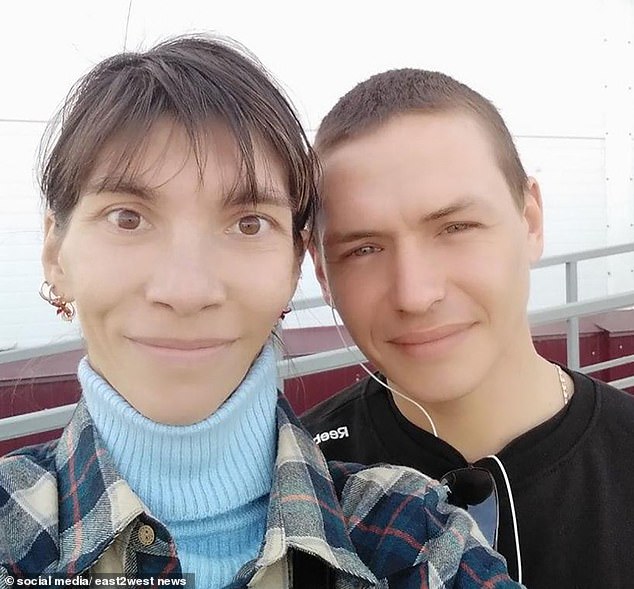 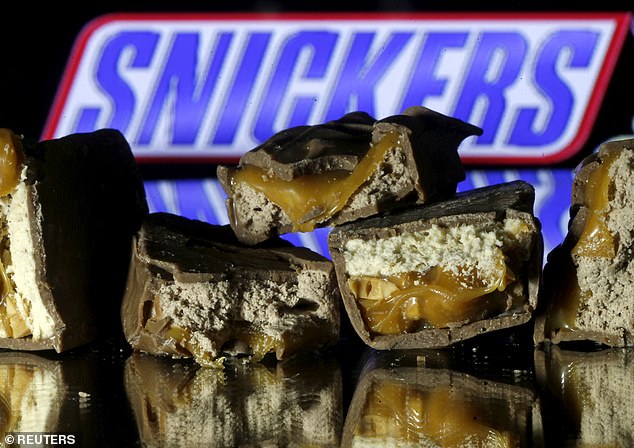