The Wag sensationally won the epic libel battle on Friday after Rebekah, 40, was found to have leaked stories to the press.

Usually, anyone who wins a civil case will still have to pay around 30 per cent of the final costs.

But the mum-of-four believes Rebekah should have to shell out the full amount after the judge’s damning ruling, Mail on Sunday reports.

A source told the paper: “Coleen didn’t want this to happen. She knew the money would be better spent on so many other things but she won’t be letting Rebekah get away with not paying the full costs. 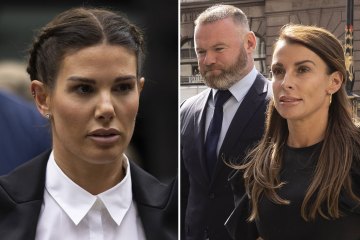 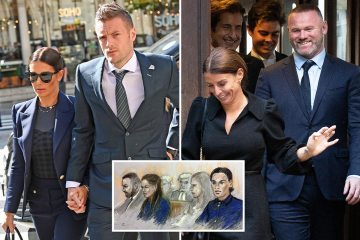 “She tried to settle this early on but Rebekah wouldn’t have it. And if you look at the outlining of the judgment, it is inconceivable that a judge wouldn’t agree she will pay them in full.

“Let’s not forget, this action was brought by Rebekah and she lost spectacularly.”

Lawyers from both camps will now thrash a deal out behind closed doors before September.

Experts have already said it is highly likely Rebekah will be forced to pay almost all of Coleen’s £1.5million bill as well as her own costs.

The Sun also revealed how Coleen is in talks to haul Rebekah back to court to make a damages claim.

Rebekah’s reputation and finances are now hanging in tatters after she was savaged by Mrs Justice Steyn in her ruling on Friday.

The judge said Rebekah “knew of, condoned and was actively engaged” in leaks to the media by her agent Caroline Watts.

She branded the mum-of-five’s evidence as “manifestly inconsistent” but praised Coleen as an “honest and reliable” witness.

Defiant Rebekah hit out after the ruling and insisted the judge “got it wrong”.

While Coleen said she was “pleased” with the ruling but said she “never believed” the case should have gone to court “at such expense in times of hardship for so many people when the money could have been far better spent helping others”.

She also told how she was left with “no alternative” but to go through with the case to “defend” herself and end the leaking of stories.

She added: “Both before and after my social media posts in October 2019, I made every effort to avoid the need for such a drawn out and public court case. All my attempts to do so were knocked back by Mrs (Rebekah) Vardy.

“Although I bear Mrs Vardy no ill-will, today’s judgment makes clear that I was right in what I said in my posts of October 2019.

“Finally, I would like to thank all of my legal team, my family, friends and everyone who supported me, including the public, through this difficult and stressful time.”

The row erupted back in October 2019 when Coleen, 36, turned detective and accused Rebekah of sharing stories from her personal Instagram account.

She then said the fake stories had only been viewed by one person, and ended dramatically: “It’s . . . Rebekah Vardy’s account.”

In return, Rebekah declared war and accused Coleen of destroying her reputation as she brought the libel case to court.

Coleen claimed her post was a “last resort” and told the court she was “surprised” by how much it exploded.

The Wag also revealed she tried three times “in vain” to settle the multi-million pound case before it reached trial.

Coleen said: “I’ve been silent… I don’t want to be here… it’s Mrs Vardy who has brought me here”.