Joe Manchin went to bat for his reconciliation bill Sunday by doing something called the ‘full Ginsburg’ – meaning he went on all five major networks’ morning shows over the weekend.

The moderate Democratic senator from West Virginia appeared on CNN’s State of the Union, Fox News Sunday, ABC’s This Week program, CBS News’ Face the Nation and NBC’s Meet the Press. He is only the 31st major newsmaker to complete this feat.

The message was similar across the board – that the Inflation Reduction Act of 2022 will decrease inflation and not raise taxes on the average American household.

But the nonpartisan congressional Joint Committee on Taxation released a report estimating that taxes will increase on Americans. In addition, the report found that more than half of the tax increases are on those making less than $400,000 per year – rather than the top earners.

‘I’m just going to fight like the dickens to make sure this piece of legislation gives us relief and fights inflation and is great for America,’ Manchin said in his appearance on Fox.

The Inflation Reduction Act of 2022 also includes an increase of the corporate tax minimum to 15 percent, meaning that some of the country’s top job creators will be hit the hardest by the proposal.

Manchin claims the corporate tax hike is a way to close ‘loopholes’ for companies that don’t pay their fair share, insisting that many companies already pay this rate or more.

The moderate senator struck his deal with Senate Majority Leader Chuck Schumer and announced from COVID-19 isolation last week the pared-back version of Joe Biden’s Build Back Better plan – to the ire of Republicans.

‘I agree with my Republican friends,’ Manchin told NBC’s Chuck Todd on Sunday morning. ‘We should not increase taxes.

‘And we did not increase taxes,’ he assured. 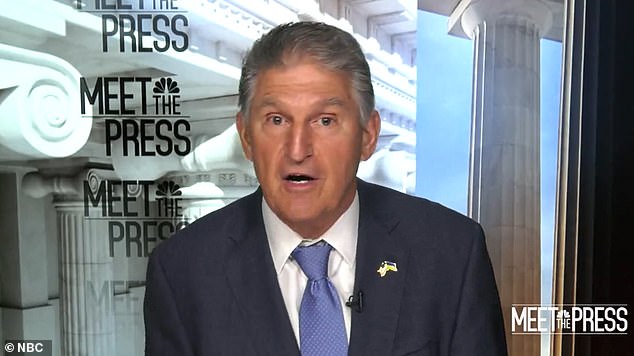 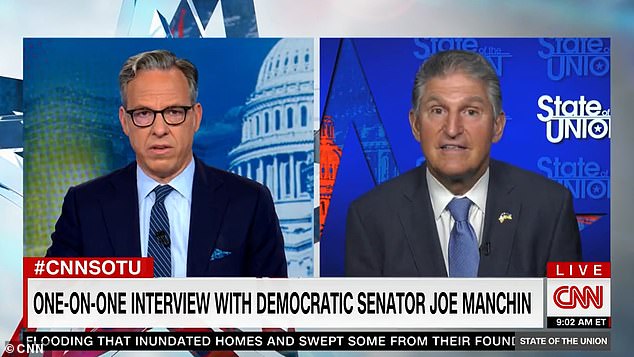 On CNN, Manchin refused to comment on the 2024 election and whether he would support President Joe Biden in a reelection bid, saying: ‘I’m focused on right now’

‘That’s what we scrubbed out from that Thursday when we shut down, until we started talking again on Monday,’ the West Virginia Democrat detailed. ‘The only thing we have done is basically say that every corporate of a billion dollars of value or greater in America should pay at least 15 percent a minimum corporate tax. Many people in West Virginia couldn’t believe that corporations aren’t paying anything, and some of the largest in the country.’

‘Most businesses and all corporations that I know pay 21 percent,’ he continued. ‘So that’s not a tax increase. It’s closing a loophole.’

Since then, the ‘full Ginsburg’ treatment has been reserved for top government officials during massive news events – evident by the fact the last person who completed the rounds was Dr. Anthony Fauci at the onset of the COVID-19 pandemic hitting the U.S. in March 2020.

When appearing on CNN’s State of the Union Manchin would not comment to Jake Tapper on the 2024 presidential election and prospective candidates, saying Biden is ‘my president right now and I am working with him.’

He also told Fox News Sunday host Bret Baier that he would not ‘get into 2024’ when asked if he has signaled to his donors a potential bid for the White House.

When asked by Todd on Meet the Press if he wants Democrats to retain control in general come the November midterms, Manchin declined to comment. 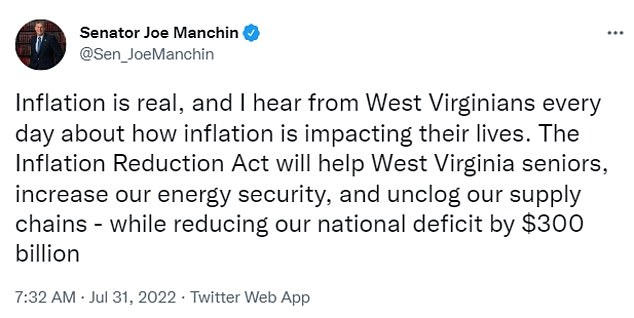 Instead of answering, the senator said, people ‘are sick and tired of politics’ and want their representatives in Washington to put country over party.

‘I’ve always taken the approach, whoever you send me, that’s your representative and I respect them and I respect the state for the people they send and I give it my best to work with them and do the best for my country,’ Manchin said.

The moderate Democrat faces reelection in 2024 in the deep red state of West Virginia.

Manchin said to ABC’s This Week host Jonathan Karl on Sunday morning that the point of his 10-months-in-the-making deal with Schumer is to fight inflation.

‘Inflation is real, and I hear from West Virginians every day about how inflation is impacting their lives,’ Manchin tweeted Sunday morning. ‘The Inflation Reduction Act will help West Virginia seniors, increase our energy security, and unclog our supply chains – while reducing our national deficit by $300 billion.’

Details on the Inflation Reduction Act of 2022

Senators Joe Manchin and Chuck Schumer’s new bill would raise $739 billion in new revenue through a variety of proposals:

$14 billion from closing the carried interest loophole for money managers

All this would leave $300 billion to reduce the deficit

The deal was announced at the same time the Commerce Department released Gross Domestic Product (GDP) figures last week that showed a second consecutive quarter of contraction – therefore meeting the traditional and widely recognized definition of an economy in a recession.

GDP shrank 0.9 percent in the second quarter of the year, following a decline of 1.6 percent in the first quarter, the Commerce Department said Thursday.

President Joe Biden and his officials, however, insist that there is no recession, claiming that other figures, like job growth, need to be considered when declaring a recession.

Technically, a recession has to be officially declared by the National Bureau of Economic Research.

The Inflation Reduction Act of 2022 was revealed on Wednesday. It is a scaled back version of the $3 trillion Build Back Better deal previously proposed and rejected.

The new package aims to reduce carbon emissions 40 percent by 2030, lower health care costs and provide a lump sum payment toward reducing the deficit in order to fight record-breaking spikes in inflation.

The bill aims to raise $739 billion in new revenue through a variety of proposals, including bringing in $313 billion by implementing a 15 percent corporate minimum tax and another $14 billion from closing the carried interest loophole for money managers.

But the Inflation Reduction Act also includes $433 in new spending, including the biggest chunk – $369 billion – going toward energy security and climate change and another $64 billion on extending health care subsidies for the Affordable Care Act.