Luca Bish’s family have defended him after viewers slammed the fishmonger for his ‘overreaction’ towards discovering his fellow Islanders had voted for him to go in the public vote.

The 23-year-old’s family said he had stayed ‘true to himself’ and that he had simply been ‘honest with his emotions’.

Luca had been criticised by a number of viewers for becoming enraged after learning that he and Gemma Owen had been voted for as least compatible couple. 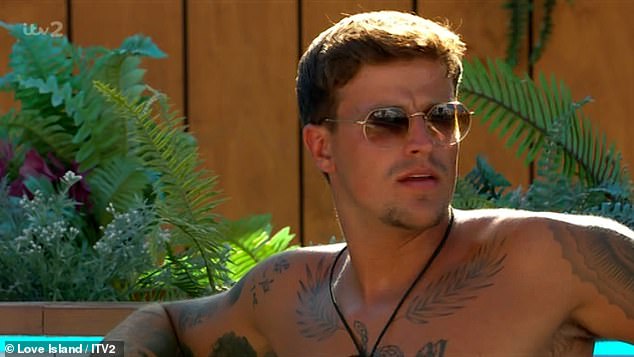 Taking his side: Luca Bish’s family have defended him after viewers slammed the fishmonger for his ‘overreaction’ towards discovering his fellow Islanders had voted for him to go in the public vote

After being saved, he sat down at the firepit and muttered to Gemma: ‘Ooh I’m gonna have some fun tonight,’ suggesting he was about to kick off.

Later, Luca said: ‘The people I voted for I don’t give a f**k’, adding that he sounded ‘angry’ because: ‘F**king all I know is how good me and Gemma are, but then three of you voted for me.’

Viewers at home blasted Luca for his reaction, saying it was both over-the-top and hypocritical, after he had called out Tasha for being upset over being in the bottom and also voted for his fellow Islanders.

One said: ‘Luca so bitter that he was voted for when Davide doesn’t even care that everyone voted for them. It’s a game show. Not that deep.’ 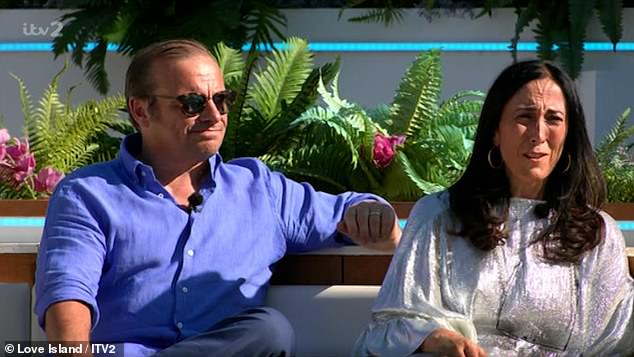 Supportive: The 23-year-old’s family said he had stayed ‘true to himself’ and that he had simply been ‘honest with his emotions’.

A second echoed: ‘luca is such a baby omg how is this a whole grown adult??? like hours after his mum said he needs to watch how he reacts to situations’.

Someone else argued: ‘Remember when Luca got angry at Tasha for being upset about being in the bottom 3 and said it shouldn’t matter because her and Andrew are together and that’s all that matters. And now look at his behaviour tonight. Complete and utter hypocrite.’

Taking to his Instagram Stories, his family took his side and screenshot a comment from a fan supporting Luca.

The comment said: ‘Can’t believe how many people lack basic skills. Luca was not upset about the votes, he was upset that no one had voiced any concerns about him and Gemma’s relationship before.

‘Both couples he votes for, he had made clear to them how he felt about their relationships. Is it so bad that he expected the same level of honesty, realness and openness from them?

‘The boy wears his heart on his sleeve, isn’t’ afraid to show vulnerability and had stayed loyal and true to his feelings. The boy cares, let him!’

Luca’s family then added: ‘Say it louder for the people at the back!!!! Our boy has been so open, loyal and honest with his emotions the entire way through this experience.

‘Like our mum said, we’ve wanted to tell him off a few times (think I might buy a cream pie to throw at him so that I have the opportunity), but he’s been so true to himself and not been afraid to be emotional. 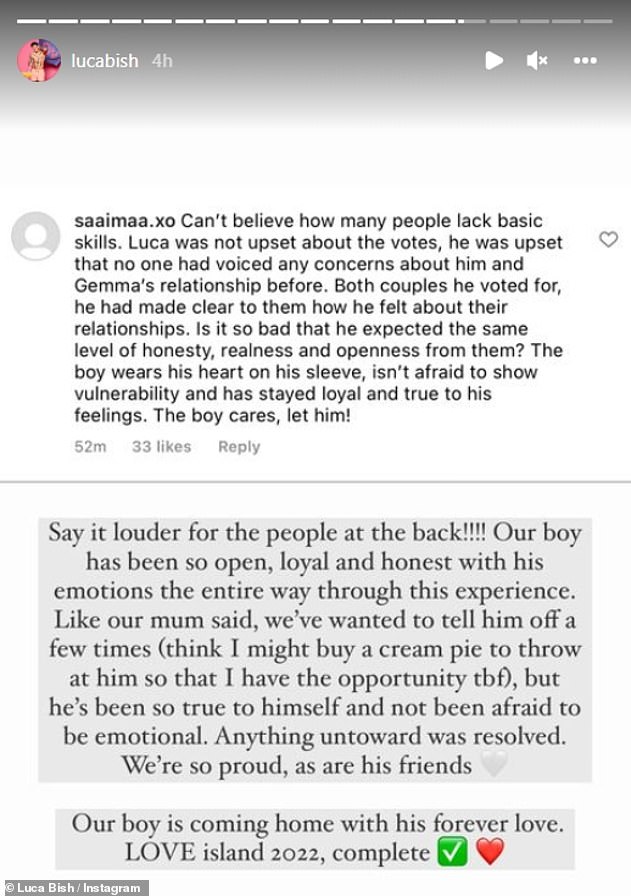 Defence: Taking to his Instagram Stories, his family took his side and screenshot a comment from a fan supporting Luca

‘Anything untoward was resolved. We’re so proud, as are his friends. Our boy is coming home with his forever love. LOVE island 2022, complete.’

They also shared a photo of Luca and Gemma, 19, writing over the top: ‘Can you actually imagine the babies’.

It’s not the first time that Luca’s family have commented on his behaviour in the villa.

In Sunday’s meet the parents episode, Luca asked his parents what they thought of his behaviour and they hinted at him they were less than impressed with how he was towards Tasha on occasion. 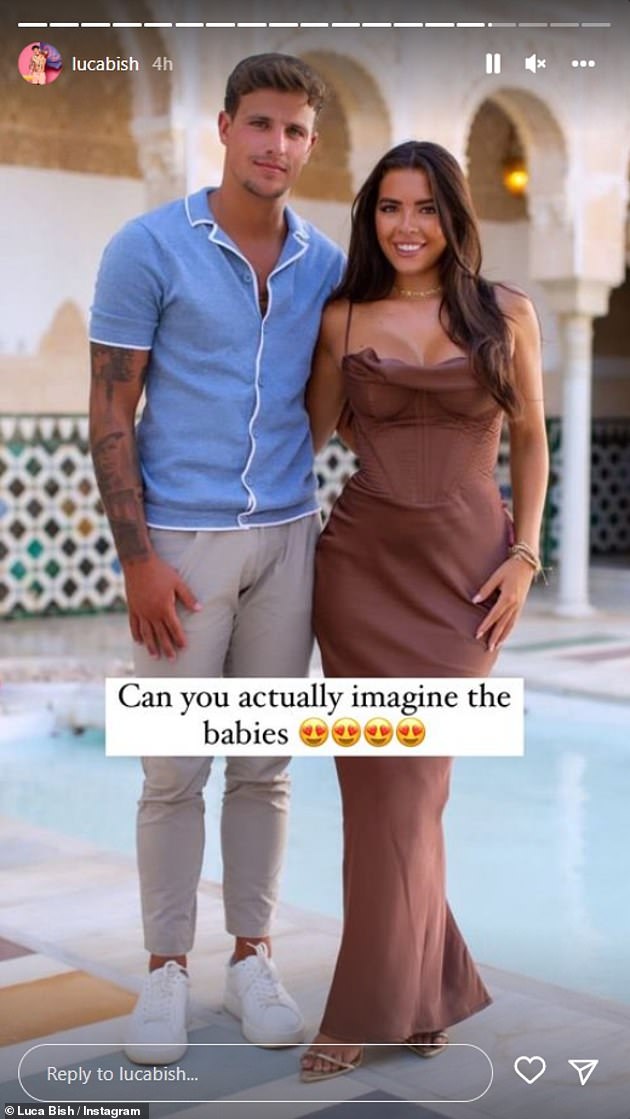 Couple: They also shared a photo of Luca and Gemma, 19, writing over the top: ‘Can you actually imagine the babies’

His mum said, ‘We’ve laughed, we’ve cried, and there have been times when I’ve wanted to come in and give you a good telling off. Just sometimes overreacting. Well, Luca, when you come home we’ll have a chat about it.’

Luca asked, ‘But do you think with the Tasha stuff, I came on a bit strong,’ and his mother replied, ‘Do you know what? You’ve resolved it. That’s the main thing. Yeah, you did overstep the mark.’

He added: ‘If I’ve done wrong I know it and hearing you two say it is even more…’

And last month, they once again took to his Instagram Stories to say they didn’t condone his behaviour towards Gemma. 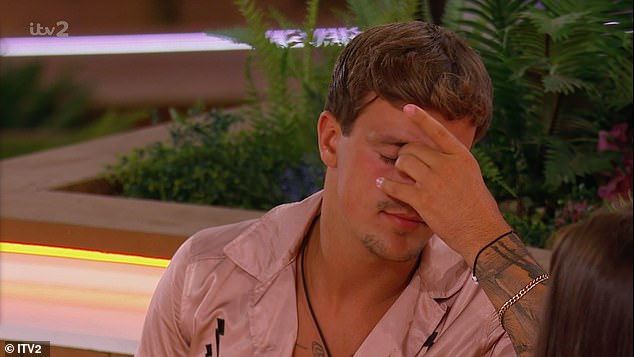 ‘We don’t condone his behaviour’: It’s not the first time that Luca’s family have commented on his behaviour in the villa

His family said that while he would be ’embarrassed’ by his actions and will no doubt apologise, he didn’t deserve the abuse he had been getting.

They said his behaviour was not reflective of the boy they ‘know and love at home’ but noted that his Love Island experience is an intense one.

They wrote: ‘I want to apologise on behalf of Luca for his insensitive reaction on last night’s episode. I know that when he watches it back, he will be embarrassed and deeply apologetic.

‘We as his family don’t condone his behaviour last might, but we do understand he is in an intense environment where his actions are heightened. Last night was not reflective of the boy we all know and love at home.

‘Please be aware death threats and nasty comments totally overstep the mark and something we has a family should not have to ensure, for this reason we have turned off the comments and messages.

‘For all those who have sent messages checking in on us, we would like to thank you very much and we see you.’

Luca was left seething after watching Gemma have a chat with Billy during Casa Amor, prompting him to question the strength of their relationship.

The second half of Movie Night saw a clip entitled Good Bill Hunting show Billy and Gemma chatting in the villa. 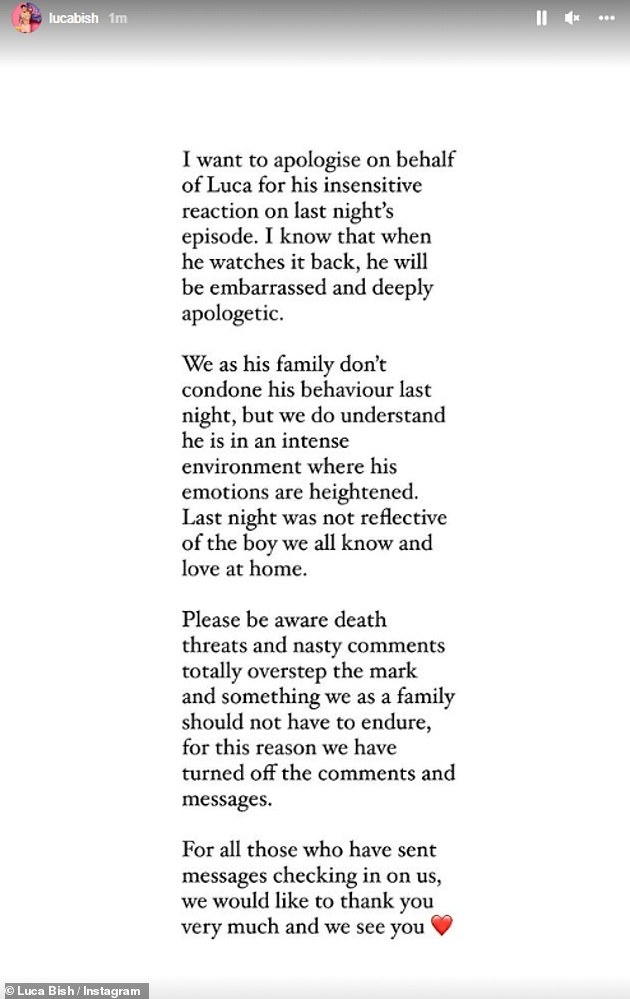 Addressing: And last month, they once again took to his Instagram Stories to say they didn’t condone his behaviour towards Gemma

Billy quizzed Gemma on whether options were open when it came to pairing-up with another person despite her being in a couple with Luca.

Luca fumed as he watched the clip: ‘Just bring me a f**king bird in and watch.

‘Trust me when I say, if she wants to f**king play games with me, I’ll play with it.’

He added: ‘I can’t be with someone like that, I’m sorry.’

Later that evening after the films aired, Luca pulled Gemma for a chat, saying: ‘You were entertaining it,’ to which Gemma replied: ‘No I wasn’t.’

Luca called Billy over to the fire pit to join them and asked: ‘Did you feel like she was flirting with you?’

Billy answered: ‘Yeah, it was just flirty banter,’ prompting Gemma to interject: ‘Did we have a flirty chat? Yes.’

Luca replied: ‘But just a minute ago you said you didn’t have a flirty chat, you literally said I wasn’t flirting.’

As the conversation continued, Gemma said: ‘I don’t think any lines have been crossed.’ 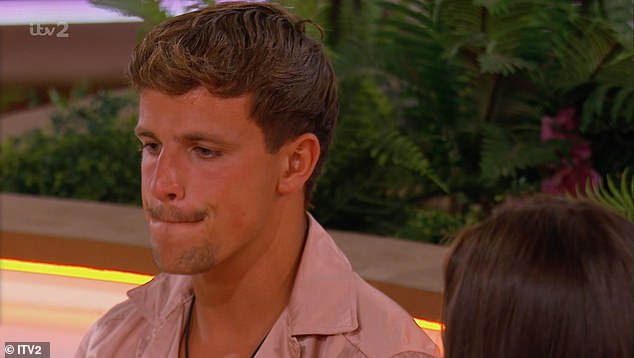 Fuming: Later that evening after the films aired, Luca pulled Gemma for a chat, saying: ‘You were entertaining it,’ to which Gemma replied: ‘No I wasn’t’

However, Luca did not back down, insisting that the real source of his anger was not that he flirted but instead how he came out of the situation.

He explained: ‘I’m not angry that you flirted. I’m angry that when I pulled you on the situation, you made me out to be an idiot.’

Viewers at home fumed watching the scenes, arguing Gemma had done nothing wrong and that Luca was displaying ‘gaslighting’ behaviour.

One fan said: ‘Luca gives abusive partner vibes, GEMMA GET ON YOUR HORSE AND GALLOP AWAY.’

Another agreed, saying: ‘Nah someone needs to sit me down and explain what exactly Luca has to be that fuming about? He should’ve left with Jacques.’

A third compared Luca to Joe Goldberg from the Netflix show You, saying: ‘Nah gemma needs to leave Luca. She could ask the male shopkeeper for her receipt and he’d say she was “entertaining” him.’

Someone else echoed: ‘no bc luca is actually gaslighting gemma into believing that she did something wrong. she needs to drop him asap’.

While a fifth said: ‘Lemme report Luca to Ofcom. This is how we miss the signs of abusive men.’

Who is their type on paper? ‘In Swansea there is just no-one I can find.

‘I haven’t got to swipe. So, hopefully they can just come to me now!

‘I came out of a relationship and I was just so done with guys. Then I was like, ‘Ok, I’m bored now’

Who is their type on paper? ‘It’s quite hard to date without being influenced by social media and stuff like that.

‘Love Island is a great place to get to know someone one-on-one.

‘I don’t think I have ever been out with two guys who are quite the same.’

Who is their type on paper? ‘My dating life has been a shambles.

‘This is an opportunity for me to find ‘the one’ and have a great summer at the same time.

‘I’m definitely ready for a relationship. I’m 23 now so I’m ready to get to know someone and travel with them.’

Who is their type on paper? ‘I am open to finding love, I’m wanting to have a really fun summer.

‘I would say I’m fun, flirty and fiery. I think I’m good at giving advice, I’m a good person to talk to, I’m very honest.

‘If I want the same guy, I’d do it but in a nice respectful way.

Who is their type on paper? ‘When I’m with someone I’m very loyal.

‘I’m a good boyfriend as when I’m with someone I’m all for them.

‘I’m actually single for once, so I thought why not? This is the best time to give it a go.’

Who is their type on paper? ‘I’m quite picky and I’m not just looking for looks, I’m looking for brains!

‘I’m looking for someone with intelligence, someone who can have good chats. Nothing like cockiness!’

Who is their type on paper? ‘I will be talking to different girls, it might not go well with some.

‘When I’m actually in a relationship, I think it’s a star sign thing.

‘I’m an Aries but I’m very passionate – I always used to put that person first. I’m really good at being in a team’.

Who is their type on paper? ‘A lot of English girls actually love me.

‘Find my person so I can actually build something in the future, grow with them, be a family. ‘

Who is their type on paper? ‘I prefer to meet girls out and about. I think when you go looking for it, it’s not as easy though, it’s like you’re too desperate for it.

‘If I think you’re the one or I like you, I’ll take you out on a date but other than that, if we talk and I don’t like where it’s going – then I won’t be throwing out dates.’ 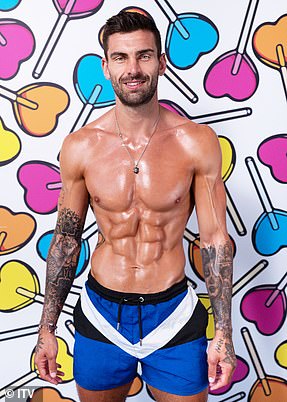 Why Love Island and why now? ‘I’m going to ruffle a few feathers when I go in.’