It has been carrying out scientific operations for less than a month but NASA’s James Webb is once again wowing with its view of the universe.

The super space telescope has now peered into the chaos of the Cartwheel Galaxy, revealing new details about star formation and the galaxy’s central black hole.

Its powerful infrared gaze produced a detailed image of the Cartwheel and two smaller companion galaxies against a backdrop of many other galaxies.

Located about 500 million light-years away in the Sculptor constellation, the Cartwheel Galaxy is a rare sight.

Its appearance, much like that of the wheel of a wagon, is the result of an intense event — a high-speed collision between a large spiral galaxy and a smaller galaxy not visible in this image.

Other telescopes, including the Hubble Space Telescope, have previously examined the Cartwheel.

But the dramatic galaxy has been shrouded in mystery — perhaps literally, given the amount of dust that obscures the view.

Fireworks: The James Webb Space Telescope is once again wowing with its view of the universe. It has peered into the chaos of the Cartwheel Galaxy (pictured), revealing new details about star formation and the galaxy’s central black hole 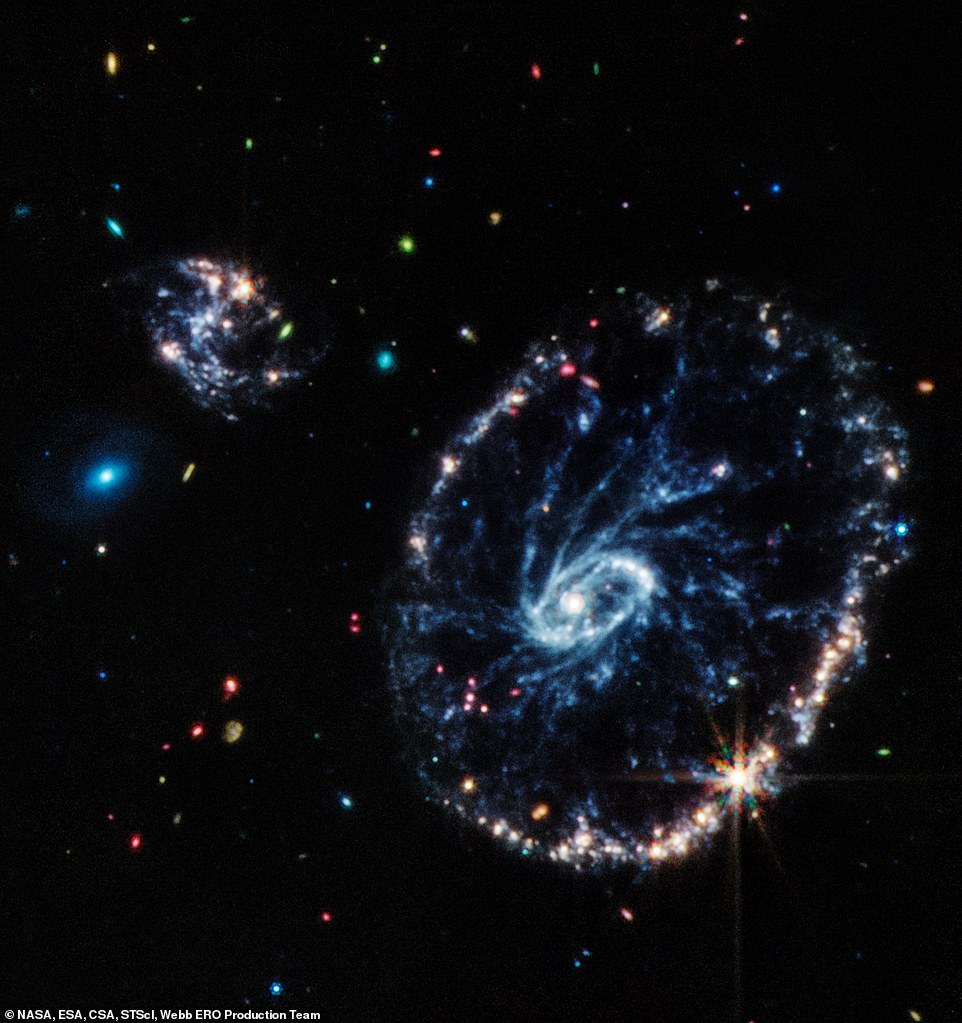 This image from Webb’s Mid-Infrared Instrument (MIRI) shows a group of galaxies, including a large distorted ring-shaped galaxy known as the Cartwheel

INSTRUMENTS ON THE JAMES WEBB TELESCOPE

Webb, with its ability to detect infrared light, now uncovers new insights into the nature of the Cartwheel.

The Near-Infrared Camera (NIRCam), Webb’s primary imager, looks in the near-infrared range from 0.6 to 5 microns, seeing crucial wavelengths of light that can reveal even more stars than observed in visible light.

This is because young stars, many of which are forming in the outer ring, are less obscured by the presence of dust when observed in infrared light. In this image, NIRCam data are colored blue, orange, and yellow.

The galaxy displays many individual blue dots, which are individual stars or pockets of star formation.

The $10 billion (£7.4 billion) observatory’s image also provides a new view of how the Cartwheel Galaxy has changed over billions of years.

Collisions of galactic proportions cause a cascade of different, smaller events between the galaxies involved; the Cartwheel is no exception.

The collision most notably affected the galaxy’s shape and structure.

The Cartwheel Galaxy sports two rings — a bright inner ring and a surrounding, colorful ring. These rings expand outwards from the center of the collision, like ripples in a pond after a stone is tossed into it.

Because of these distinctive features, astronomers call this a ‘ring galaxy’, a structure less common than spiral galaxies like our Milky Way.

The bright core contains a tremendous amount of hot dust with the brightest areas being the home to gigantic young star clusters.

On the other hand, the outer ring, which has expanded for about 440 million years, is dominated by star formation and supernovas. As this ring expands, it plows into surrounding gas and triggers star formation. 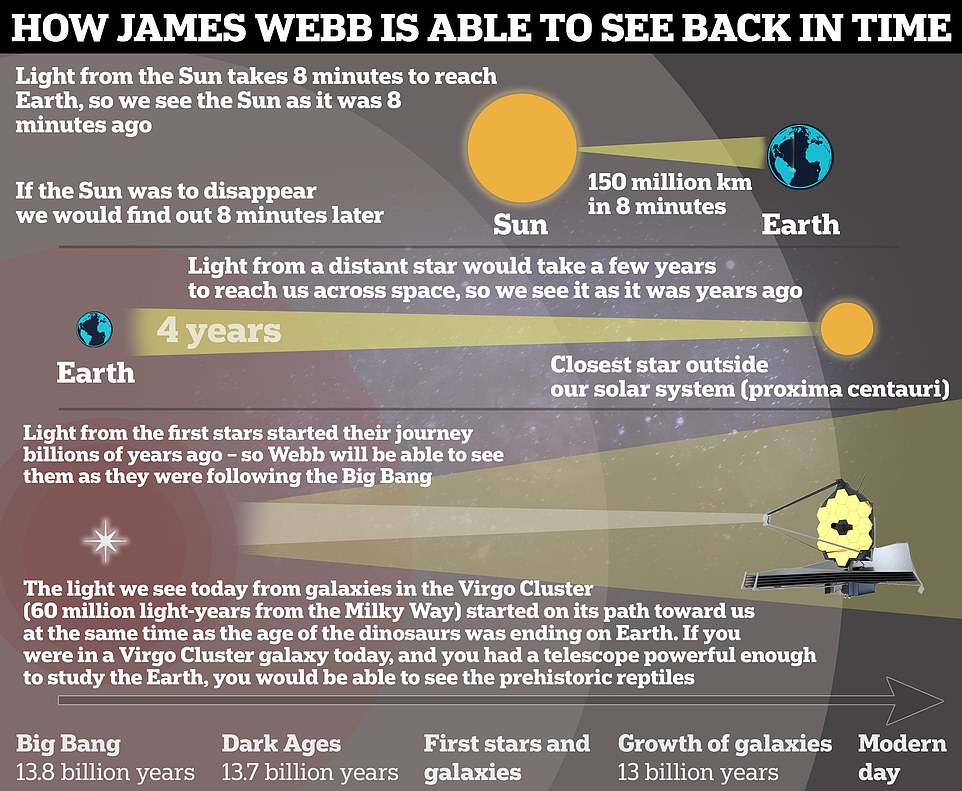 Webb’s infrared capabilities allow it to ‘see back in time’ to the Big Bang, which happened 13.8 billion years ago. Light waves move extremely fast, about 186,000 miles (300,000 km) per second, every second. The further away an object is, the further back in time we are looking. This is because of the time it takes light to travel from the object to us

Learning finer details about the dust that inhabits the galaxy, however, requires Webb’s Mid-Infrared Instrument (MIRI).

MIRI data are coloured red in this composite image, revealing regions within the Cartwheel Galaxy rich in hydrocarbons and other chemical compounds, as well as silicate dust, like much of the dust on Earth.

These regions form a series of spiraling spokes that essentially form the galaxy’s skeleton. 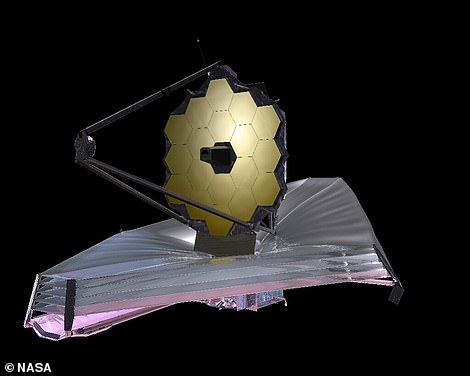 The $10 billion (£7.4 billion) observatory (pictured) provided a new view of how the Cartwheel Galaxy has changed over billions of years

The spokes are evident in previous Hubble observations released in 2018, but they become much more prominent in this Webb image.

While Webb gives us a snapshot of the current state of the Cartwheel, it also provides insight into what happened to this galaxy in the past and how it will evolve in the future.

Last month the telescope’s dazzling, unprecedented images of a ‘stellar nursery’, dying star cloaked by dust and a ‘cosmic dance’ between a group of galaxies were revealed to the world for the first time.

It put an end to months of waiting and feverish anticipation as people across the globe were treated to the first batch of a treasure trove of images that will culminate in the earliest ever look at the dawn of the universe.

Webb’s infrared capabilities mean it can ‘see back in time’ to within a mere 100-200 million years of the Big Bang, allowing it to snap pictures of the very first stars to shine in the universe more than 13.5 billion years ago.

Its first images of nebulae, an exoplanet and galaxy clusters triggered huge celebration in the scientific world, on what was hailed a ‘great day for humanity’.

Researchers will soon begin to learn more about the galaxies’ masses, ages, histories and compositions, as Webb seeks to explore the earliest galaxies in the universe.

The James Webb Telescope: NASA’s $10 billion telescope is designed to detect light from the earliest stars and galaxies

The most beautiful cities in the world according to science and the 'golden ratio' - Chester is No.1