Two ten-year-old, lonely only children at summer camp come up against their mirror image.

‘That girl’s got a nerve, turning up with your face,’ says a trouble-making chum.

Spiteful plait-pulling turns into tearful hugs with the miraculous discovery that they are in fact twins: a secret buried by their divorced parents. Cue ‘You’re my sister… oh, how beautiful that sounds’, as catchy as it is touching. 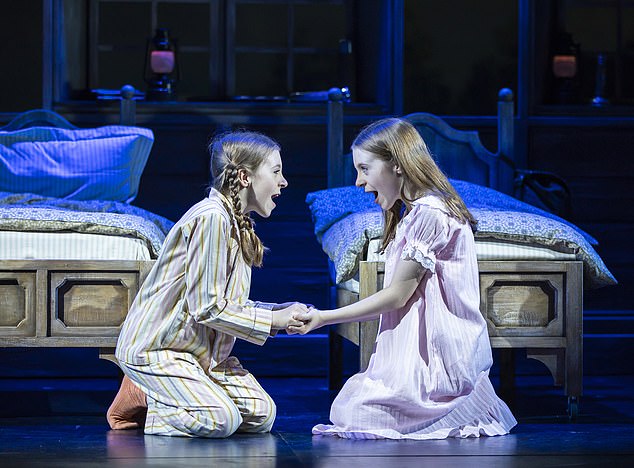 The musical version returns to the 1950s world of the original, German-set, 1942 novel, Lottie And Lisa by Erich Kästner, and to the idea of seeing double — for real — as only theatre can. Which makes it twice as much fun

Identical begins with a dream coming true, and — when this plucky pair swap lives to meet the parent they never knew — culminates in a fairy-tale ending: the divided family reunited.

Tricksy filming made a star of Hayley Mills, who played both sisters in Disney’s 1961 film The Parent Trap, and another of Lindsay Lohan in the 1998 remake.

The musical version returns to the 1950s world of the original, German-set, 1942 novel, Lottie And Lisa by Erich Kästner, and to the idea of seeing double — for real — as only theatre can. Which makes it twice as much fun.

Director Trevor Nunn, former RSC supremo, well-versed with Shakespeare’s tragicomedies of errors involving the muddles, miseries and merriment of mistaken identities, impressively brings out both the farce and the fragility of this complicated family situation in which people who belong together have been painfully pulled apart.

Best seat in the house

MUCH ADO ABOUT NOTHING

David Tennant and Catherine Tate star as the sparring lovers in Shakespeare’s comedy staged in the West End’s Wyndham’s Theatre in 2011.

On the night I was in, the twin-sationally talented Kyla and Nicole Fox, aged 12, played Lisa and Lottie, and vice versa when ‘I became her and she became me’, puzzling Papa with a sudden genius for piano-playing and ‘Muma’ with a surprising fall to the bottom of the class and some terrible cooking.

In a particularly moving scene, when a poem by Lottie hangs perfectly on a tune composed by Lisa, these two individuals do indeed seem to be two halves of one, ‘identical, with a spirit no mortal can divide’.

In another superb double-act, the musical maestros — composer George Stiles and lyricist Anthony Drewe — put a song in your heart, a smile on your face and a tear in your eye. The high-tech design duo dazzles even brighter. Douglas O’Connell’s videos projected on to Robert Jones’s sliding sets whisk the action with a movie-like magic from the dappled sunlight on shimmering leaves of summer camp to chocolate-box Vienna, where Lisa’s conductor (orchestra not bus) father has fallen in love with a glamorous ballet dancer.

A show filled with wonders.

Great British Bake Off: The Musical is exactly what it says on the packet — a tried-and-tested recipe (would it be unkind to call it a formula?) with the theme music, the bunting-bedecked tent and the sweetie-coloured Kitchen Aids all in place. Fold in gooey songs and a gluey love story and you’ve got the icing on the cake.

Pink-haired Babs is a much-married gran who enjoys her toad in the hole. Vegan Dezza lives on a canal boat and protests about animal strangulation. A-level student Hassan, from Wembley via Syria, sweetened up school bullies with his cupcakes.

Russell, a snappy dresser, has ‘Queen of Tarts’ as his Insta. Bologna fashionista Francesca yearns for a bun in the oven but is making do with kneading her own. 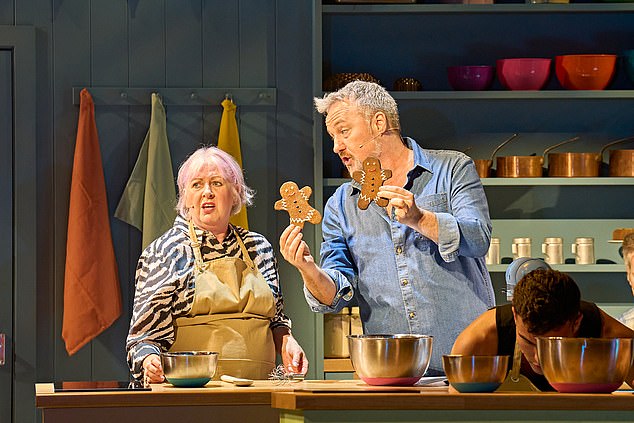 Great British Bake Off: The Musical is exactly what it says on the packet — a tried-and-tested recipe (would it be unkind to call it a formula?) with the theme music, the bunting-bedecked tent and the sweetie-coloured Kitchen Aids all in place

Solemn Ben clutches his dead wife’s recipe book, and has grief in common with the ‘back-up’ contestant, Gemma, a carer from Blackpool, made redundant by her mum’s death. Every series needs an underdog and Charlotte Wakefield’s Gemma (‘My palms are getting sweaty, my legs are like spaghetti’) is the one we’re all rooting for. Especially Ben.

Mercifully, the judges have more salt. Rosemary Ashe’s Dame Pam is the bark to the bite of John Owen-Jones’s blue-eyed silver-fox in leathers. There’s even a little kick to their duet, I’ll Never Be Me Without You. Rachel Kavanaugh’s well-presented production slips down a treat, but what’s missing is any depth of flavour, that dash of balsamic that makes a competent cook into a star baker.

Identical runs at Nottingham Playhouse until August 14 before moving to the Lowry, Manchester, where it will be on until September 3.

All aboard for a bewitching return to Narnia

The Lion, The Witch And The Wardrobe (Gillian Lynne Theatre, London)

There is a distinct echo of Harry Potter at the start of this imaginative, occasionally spectacular adaptation of C. S. Lewis’s classic when the four Pevensie children — Peter, Susan, Edmund, and Lucy — evacuees from a blitzed World War II London, gather on a station platform. The fantastical world of Narnia clearly inspired J. K. Rowling.

Then it’s all change, as the passengers raise their suitcases aloft and, lit up like windows, the cases become the carriages of a train shooting through the darkness to the wilds of Aberdeenshire. Thrilling.

This reworking of Sally Cookson’s smaller-scale 2017 adaptation is a play with enjoyably folksy songs (no take-home melodies) rather than a full-on musical. 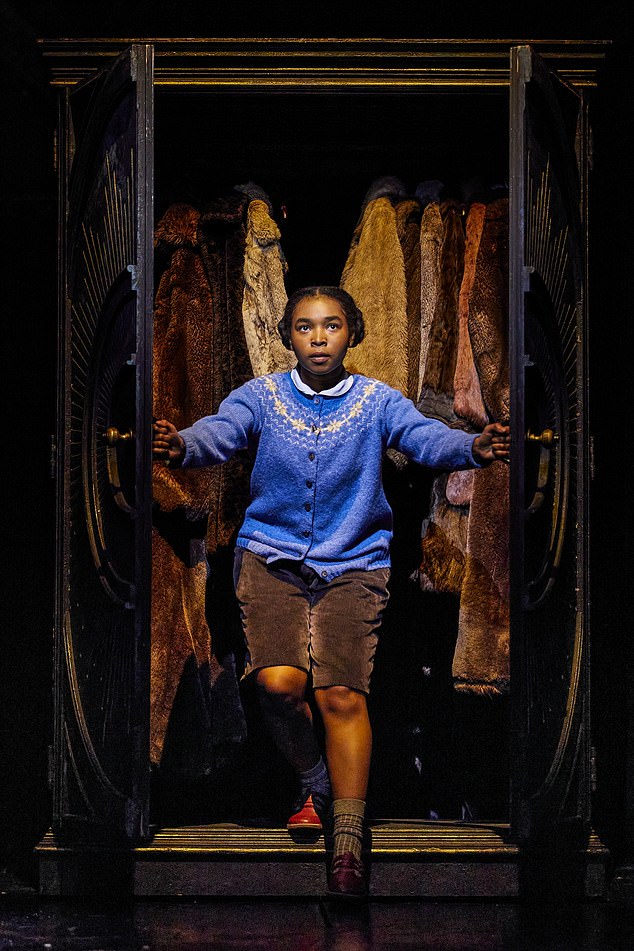 The solid old wardrobe opens into a kingdom of billowing white parachute silk, a place forever winter, where goodness battles against evil — and wins. But at a price: bloodshed and death.

Not that the show shrinks from the brutal reality of war and cruelty. Samantha Womack’s chilling, icicle-crowned, knife-wielding White Witch is vile and violent.

The sadness and nobility of the awesome Aslan is brought to remarkable part-human, part-animal, part-spiritual life by both an actor, Chris Jared, draped in acres of rippling fur, and a huge leonine puppet, enlivened by three near-invisible puppeteers, one controlling a particularly expressive tail.

By contrast, the excellent actors playing mere humans are somewhat ordinary and earthbound. Which is all for the best. An audience of spellbound children appeared to recognise themselves.

Who is Ne-Yo's ex-girlfriend, Monyetta Shaw?