ALAN SHEARER and Ian Wright teamed up on the first Match of the Day of the season to deliver a cringeworthy pun.

Although the joke went down like a lead balloon both with presenter Lineker.

The pun came during Shearer’s analysis of Tottenham’s 4-1 victory over Southampton.

The all-time Premier League record scorer criticised Jan Valery for not coming out to stop a Son Heung-min cross that led to Eric Dier’s goal.

Shearer highlighted the Saints man and said: “Why doesn’t he come on over?” 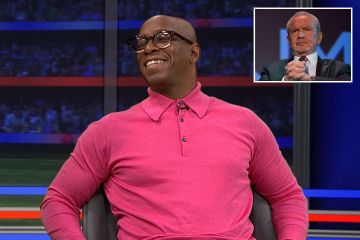 Wright then quickly said: “Who?”

And in cringeworthy style Shearer replied to the tune of Valerie: “Valery.”

Lineker could only muster an “oh dear” in response to the joke, and compared the two pundits to comedy duo Morecambe and Wise.

Fans though were left in hysterics by Shearer, pointing out that the joke was so bad it was actually good.

One wrote on social media: “Absolutely rank chat from Shearer. And I’m all for it.”

Another added: “I don’t like myself for laughing at an Alan Shearer pun, but this is bloody fantastic.”

A third joked with laughing emojis: “Shearer butchering an Amy Winehouse classic there.”

While one comment read: “An absolute screamer from Shearer.”

I’m mid-size and I’ve found the perfect co-ord, it’s so flattering & is only £30