A single mother-of-three has explained why she has never punishes or rewards her children – and why she never will.

Hannah Canavan, 33, a home education coach from South London, decided to adopt a gentle approach to parenting after working in a pupil referral unit for troubled children.

She says people think her children ‘misbehave’ because she chooses not to punish them but ‘that is not the case’.

According to Hannah: ‘Giving natural consequences rather than punishment to the kids I worked with helped their behaviour.’ 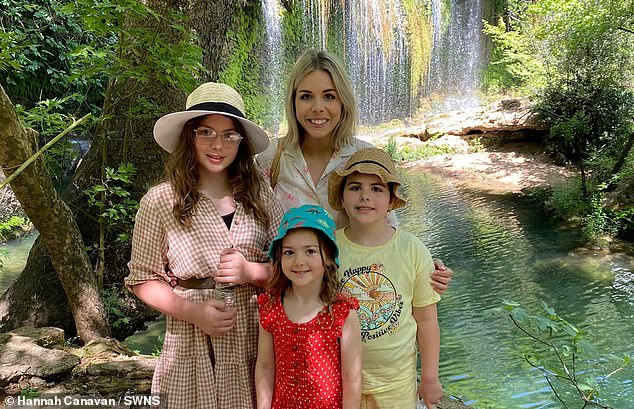 Hannah Canavan, pictured here with her daughters, Esmae, 11, Eira, nine and Elfie, seven, while on an outing together, says her children ‘respect her and feel comfortable to come to her when they have done something wrong’ 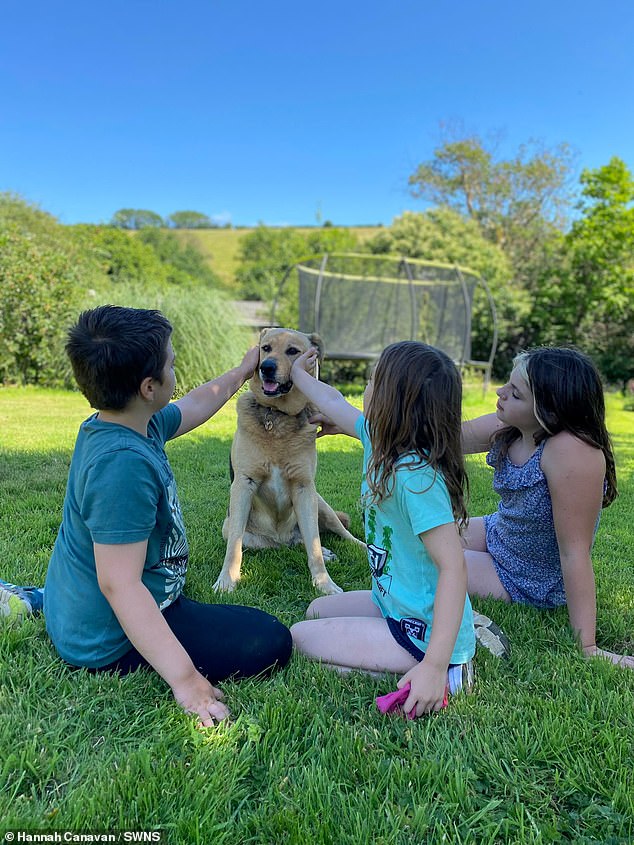 The mother-of-three children decided to adopt a gentle approach to parenting after working in a pupil referral unit for troubled children – which saw her giving natural consequences rather than punishment which, she says, helped their behaviour

Hannah, who homeschools her three daughters Esmae, 11, Eira, nine, and Elfie, seven, chose to adopt the same technique when raising her own brood.

Rather than shouting and taking away their iPad or a treat for doing something wrong, she will calmly explain why something isn’t right.

Hannah said: ‘I have never punished or rewarded my children, and it really works for me.

‘If you look at the prison system you can see punishment doesn’t work as there wouldn’t be second of third time offenders there if that was the case.

‘People think that my kids must misbehave because I don’t punish them but that’s not the case at all.

‘I don’t shout or take something away from them, they’re not scared of me as a result.

‘They respect me and listen to me because I’ll calmly explain why they shouldn’t do something, and they learn from it.’ 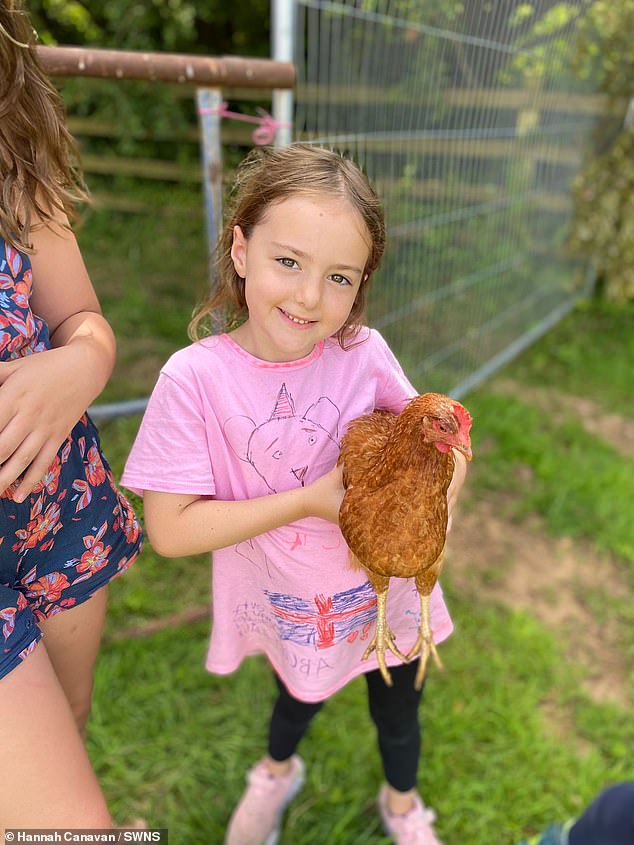 Elfie, seven, smiles as she hold a chicken – her mother decided not to reward or punish her children – and says she prefers to calmly explain why things are wrong instead of shouting

Hannah has never punished her children – even when they were young.

The home education coach said common incidents that occur with toddlers, such as running out on the road – were dealt with initially by shouting ‘no’ and then explaining why they shouldn’t do that, sometimes showing them videos of car crashes, which she claims stopped them doing it again ‘nine times out of 10’.

She said: ‘If they ran out into the road or something like that my immediate reaction might be to shout ”no”.

‘But I would then just get them to safety and have a discussion with them about how that is extremely dangerous and show them a video about car crashes so they can see the severity of it.

‘Nine times out of 10 they then won’t do it again.

‘If you shout at them and say they’re not going to get an ice-cream because they did something wrong then they’ll focus on the fact that mum or dad is cross and not on what they actually did.’ 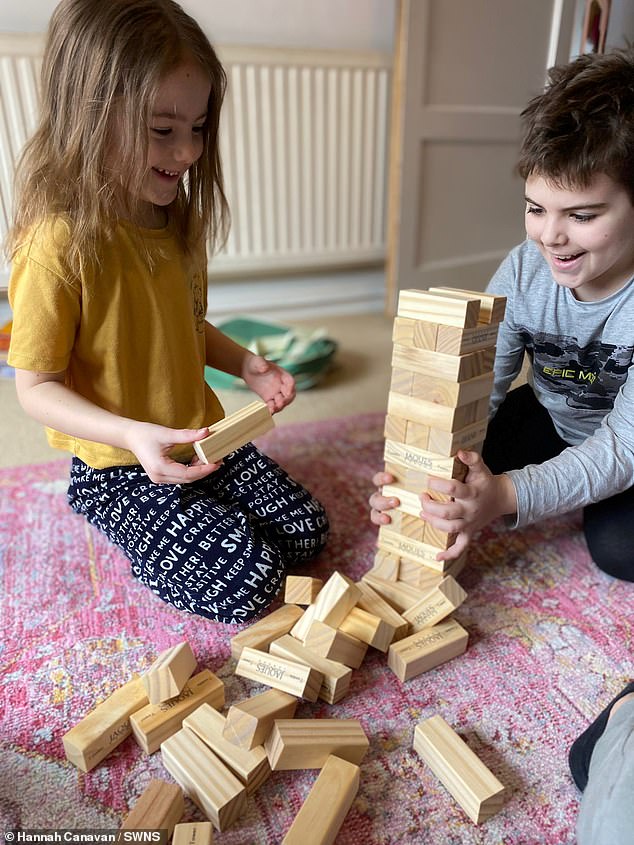 Hannah says that even when her children were younger she wouldn’t punish them, and explain to them why something was wrong while maintaining firm boundaries with her kids. She doesn’t tolerate swearing, hitting or shouting 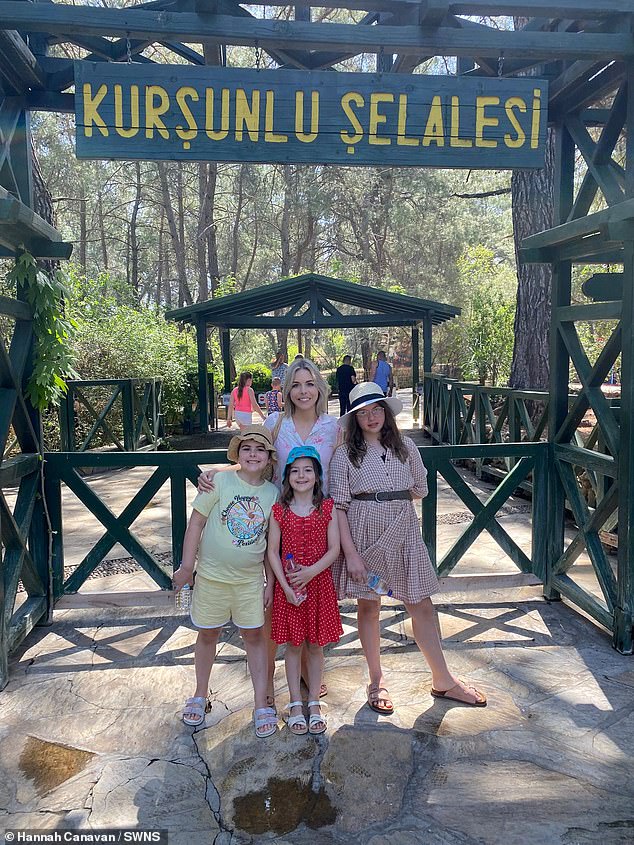 Hannah equally doesn’t reward her children, saying it removes their ‘natural motivation’ to things. However she does recognise her kids efforts when they do something good

Hannah still makes sure she has solid boundaries with her children, and she won’t tolerate swearing, shouting or hitting.

She said: ‘If they swear or hit then I’ll look at the situation as to why it happened but explain that it’s not the way to react.’

1. Remember that it is a process, not an outcome – so be patient with yourself!

2. If you feel grumpy and that you’re likely to shout, try and lower your voice and whisper- this can often stop kids shouting too as they have to be quiet to hear you!

3. Instead of asking questions when your child has done something you don’t like, state facts instead such as ‘this needs to be cleaned up please’ or ‘books aren’t for throwing.’

4. Offer alternatives – ‘we don’t put those in our mouths, but you can have some ice cubes to suck on’ or ‘we don’t throw books but let’s throw some beanbags in the garden!’

5. Once you have decided on a boundary, accept that there might be a tantrum.

Instead of moving the boundary to stop your child reacting, focus on validating their feelings and then helping them to move forward. ‘I know you’re upset we can’t watch more TV; I feel the same when I can’t watch as much as I’d like. Would you like a hug while you’re feeling sad?’

Hannah often finds that other parents who use a more authoritative parenting technique think her children must misbehave a lot and won’t listen to her because she doesn’t punish them.

She said: ‘Kids are kids, and they don’t always behave as you would like them to.

‘They might misbehave in a restaurant by banging a spoon on the table and rather than shouting at them, I’ll take it off them and take them outside and calmly explain that we won’t go back until they know they shouldn’t do that.

‘I’m biased, I think my kids are really lovely and polite – but people think they will be awful because of the fact I don’t punish them.

‘But they listen to me and even come to me if they’ve done something wrong as they’re not scared to.

‘Just the other day Eira came to me as she thought she had broken a table and she was honest about it.

‘They know that I am reasonable, and they’ll always ask for permission from me.’

In the same way that the mother doesn’t think punishments are the best way to deal with a child- opposingly Hannah also doesn’t believe in rewarding her daughters if they have done something good.

She said: ‘Of course, if one has done a lovely piece of art or something I’ll praise them and give a genuine reaction.

‘But I won’t get them a treat because of it.

‘When they’re older and they start to do exams, we’ll go out as a family to celebrate the effort that went into them rather than the results.

‘I don’t want to take away their instinctive motivation to do something.

‘If they think they’ll get a reward, then they’ll just be doing it for that.’

For Hannah, keeping her household a punishment and reward free space has kept her family close.

She said: ‘I feel very lucky.

‘Of course, it’s not perfect and we all have off days but we’re a close family and the girls respect me but are also not scared of me. I’ll never punish them.’