‘Attention, attention, this is your captain speaking. We are experiencing engine problems and will be making an emergency landing in three minutes. Stay calm and listen carefully.’

We look out the windows as the plane breaks through thick cloud and the dark blue ocean comes into view. Seconds later, we crash into the sea with a loud thud, lights flashing, alarms ringing.

‘Evacuate, evacuate,’ the captain barks, as the cabin crew unbuckle their seatbelts and start shouting demands. 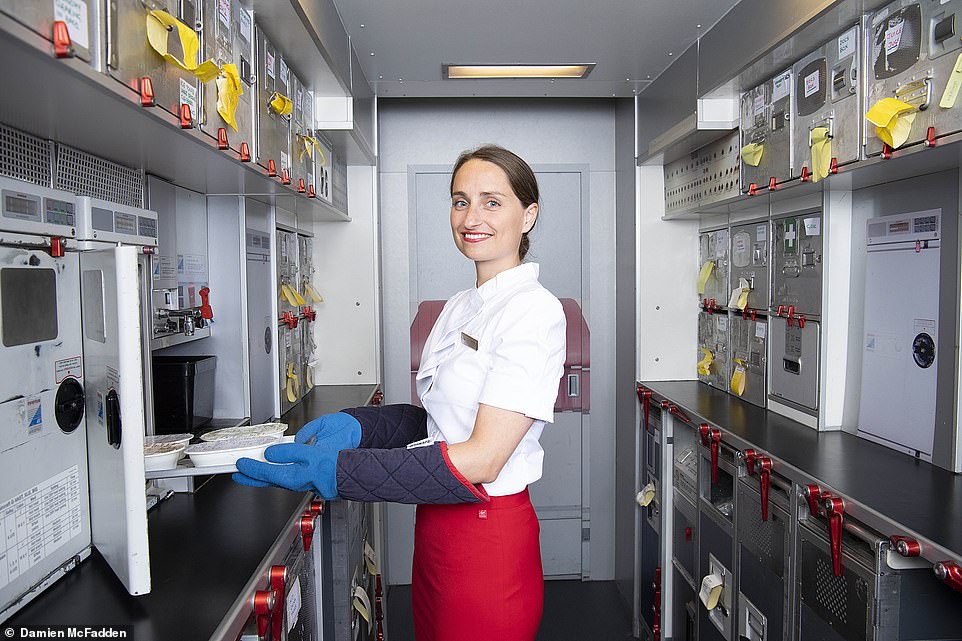 Welcome aboard: Harriet Sime joins a class of 16 male and female Virgin Atlantic cabin crew trainees. She’s pictured above aboard a Boeing 787 flight simulator in Crawley, near Gatwick airport

Virgin advertised for cabin crew this year and received more than 5,000 applications for only 400 positions

Thankfully, however, this is not a real crash. Nor is it a real plane. And, instead of jumping into freezing cold water, I emerge from a Boeing 787 flight simulator into a brightly lit training centre in Crawley, near Gatwick airport.

I’m here for the week, joining hundreds of Virgin Atlantic flight attendant trainees to see just what the job takes.

Since thousands left the travel industry during the pandemic, airlines have launched huge recruitment drives in a bid to attract new talent. Virgin advertised for cabin crew at the beginning of the year and received more than 5,000 applications — for only 400 positions.

Successful applicants will go from being nurses, teachers, construction workers, and even school students to fully qualified crew in just less than five weeks. 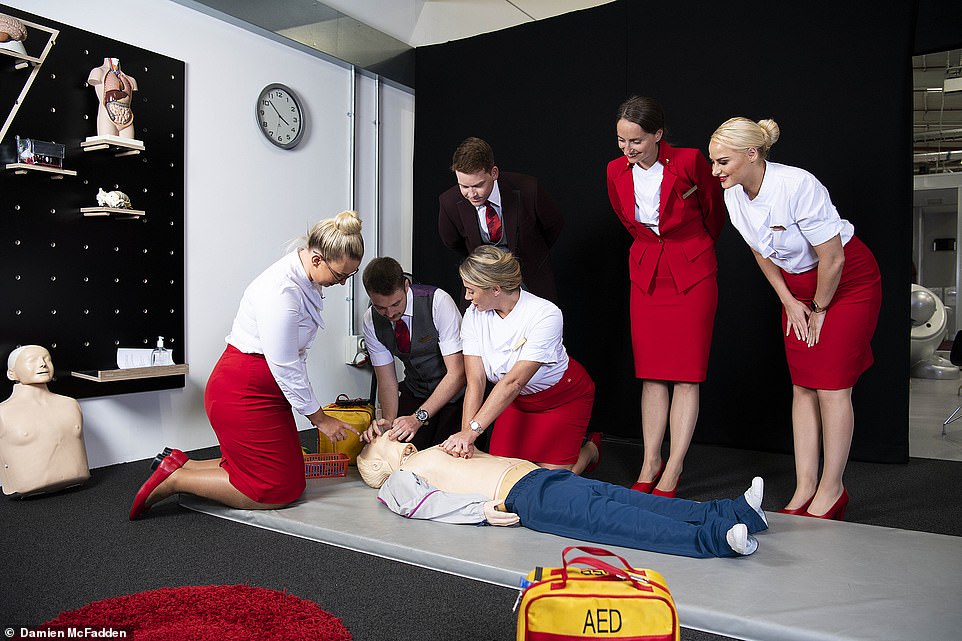 Life-savers: New recruits learn CPR. Harriet says that the cabin crew have to ‘be prepared to go from dealing with a drunken assault or engine failure to giving CPR to someone who’s gone into cardiac arrest’

But not all of them will make it. They are drilled with theoretical and practical tests every other day, which they can only retake once.

Those who pass will go on to earn a basic starting salary of £18,525 and fly to destinations including Barbados, Cape Town, Mumbai, Hong Kong, and New York. Once there, they’re put up in central hotels and given between one and three days to sleep, sightsee or socialise.

Other perks of the job include commission on on-board sales, subsistence allowances while abroad, an iPad, a Virgin wheelie suitcase and red leather handbag, and discounts on car hire, hotels, attractions and goods on the duty-free trolley.

I join a class of 16 men and women. The youngest is 18, the eldest 56 — but the majority are twentysomethings. While a few of the trainees have come from other airlines, many are completely new to the industry. Nikita Hughes, 21, has spent the past four years working at a McDonald’s in North Wales.

‘I’ve dreamt of being cabin crew all my life,’ she says. ‘When I used to go to the supermarket with my mum, I’d use the trolley to pretend I was an air hostess. I still see the job as being glamorous, but we also need to be skilled in lots of different areas, which I love.’ 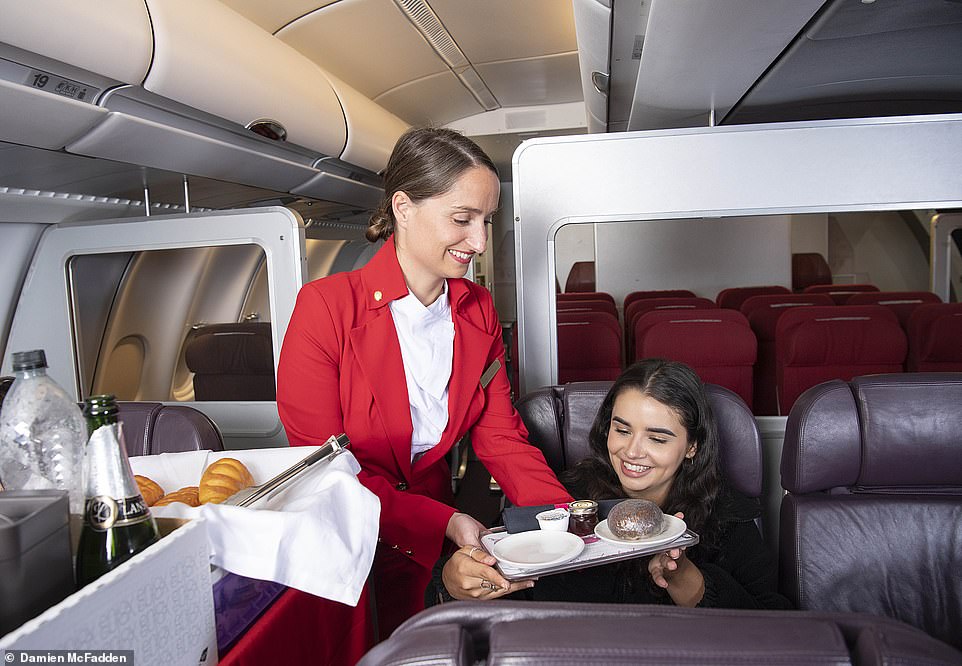 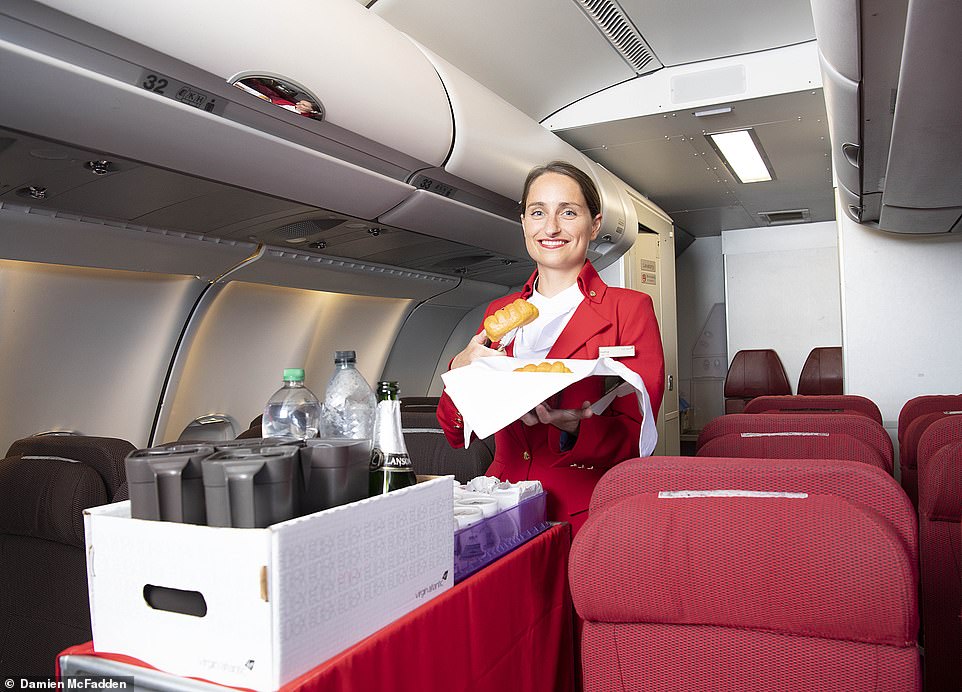 After a morning spent learning emergency evacuation theory in smart classrooms upstairs, we head down to the cavernous warehouse.

As well as two huge flight simulators, there are business-class seats for customer service training, a large inflatable slide for practising evacuation after a water landing, aeroplane door mock-ups and rooms with dummies for ‘aviation medicine’ classes.

Our sprightly tutor, Adam, who has bright white teeth and a penchant for getting us to remember announcements and procedures through catchy songs and dances, guides us to the top of the inflatable slide.

We’re taught how to get away from someone who’s grabbing our hair or throat and how to restrain a passenger with handcuffs. It’s intensive stuff — but everyone seems to be taking it in their stride.

‘Lean forward and shimmy to get momentum,’ he says with a comforting smile, as the others film us on their phones, whooping and clapping when we reach the bottom on two feet.

Once the epitome of glamour, life as a flight attendant today looks a world away from when air travel took off in the 1950s and 1960s. This ‘golden age of flying’, as it became known, saw air hostesses marketed as sexual objects willing to serve the millionaire men who filled the skies.

The women (and they were almost exclusively women) were required to be pretty, young, slim and single; it was not a job considered suitable for wives.

Their image as ‘trolley dollies’ was reinforced by innuendo-laden adverts, such as Air France’s ‘Have you ever done it the French way?’, Pan Am’s ‘Hi, I’m Cheryl. Fly Me’, and Singapore Airlines’ ‘This girl’s in love with you’.

These days, however, cabin crew face more pressing concerns than which shade of nail polish to wear or how to keep their dramatic hair styles in place during long flights. But has all the glamour been sucked out of cabin crew life? Not entirely.

In the classroom the next morning, a young girl with bright blonde hair and perfectly painted lips whispers to me: ‘Have you got the Viv yet?’ 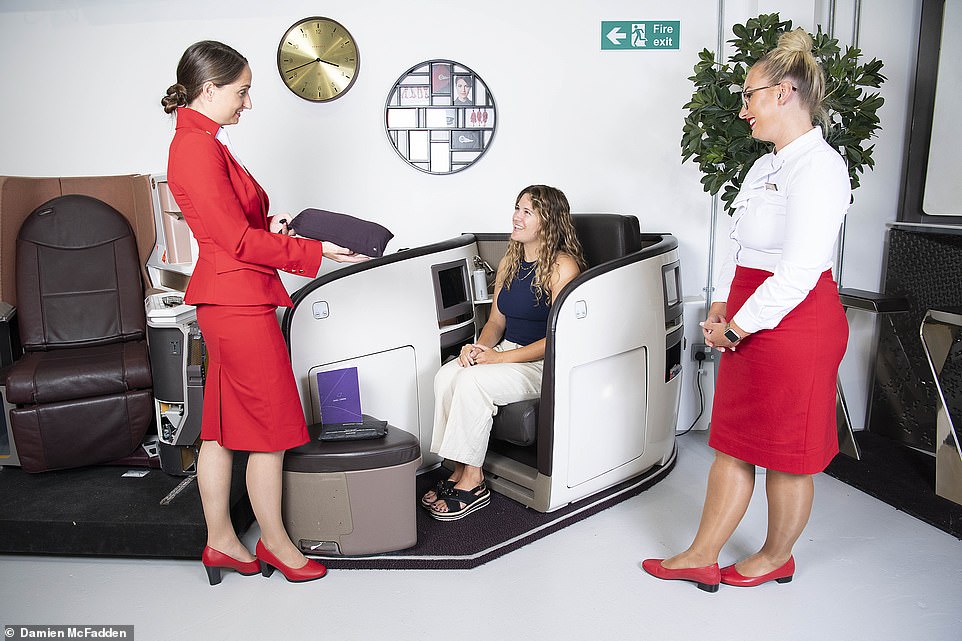 As well as two huge flight simulators at Virgin’s training centre, Harriet says there are business-class seats (above) for customer service training, a large inflatable slide for practising evacuation after a water landing, aeroplane door mock-ups and rooms with dummies for ‘aviation medicine’ classes 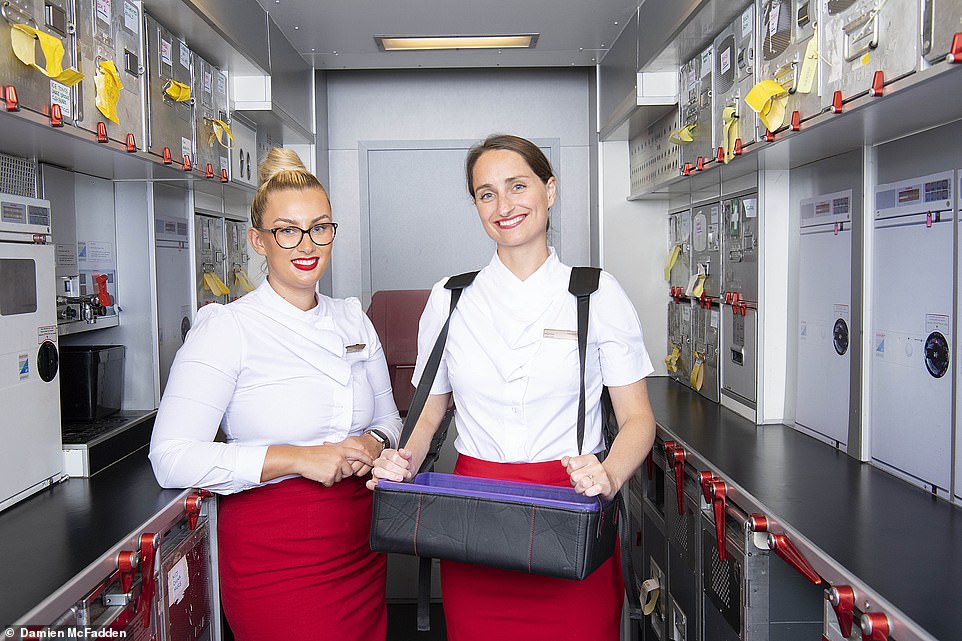 Unlike all other UK airlines, Harriet says, Virgin Atlantic staff are allowed to have tattoos on show, as long as they’re not on the face or neck. She’s pictured above with trainer Georgia Jeffery

It turns out this is the nickname for the trademark bright red uniform, designed by Vivienne Westwood, which the trainees can’t wait to get their hands on.

So, after lunch, I head to the ‘uniform boutique’ a few doors down to meet Sophie, who worked as Virgin Atlantic cabin crew for six years before joining the fitting room.

‘New recruits are always so excited for their fittings and want to bring their mum or partner along to take pictures,’ she says.

I’m given a wasp-waisted jacket with an oversized collar, a shirt, a knee-length skirt, double-breasted coat, high heels for walking through the airport and flats for while on board.

Everything comes in that signature bright Virgin red — apart from the crisp, white shirt, of course.

Unlike all other UK airlines, Virgin Atlantic staff are allowed to have tattoos on show, as long as they’re not on the face or neck. In addition, women can choose to wear trousers and are no longer required to use make-up — and the clothes go up to a UK size 30. 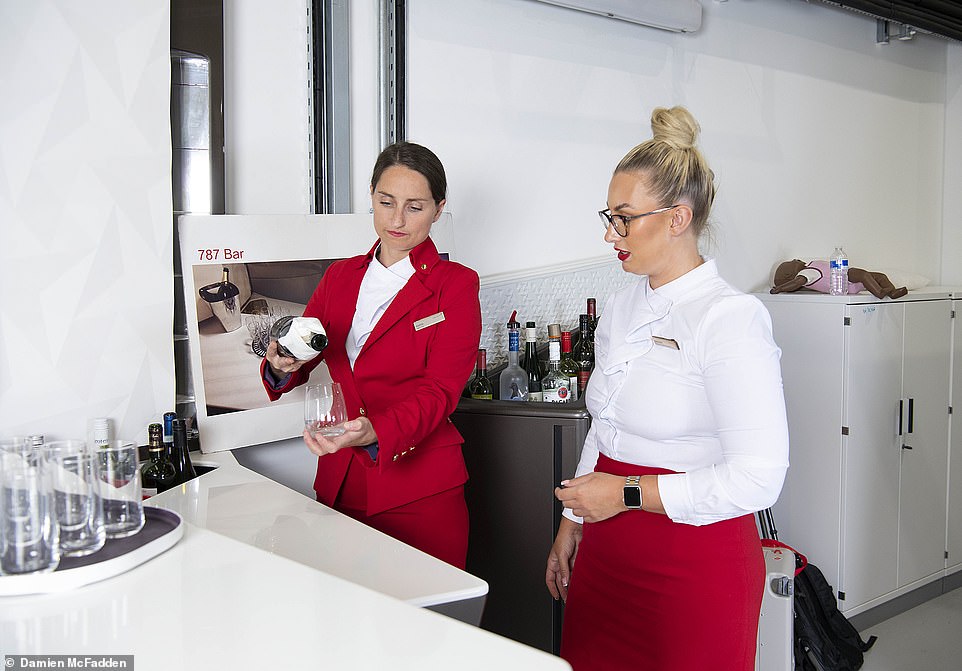 During her training, Harriet is taught to use a traffic light system to assess how inebriated passengers are

We spend the afternoon in our uniforms for service training. Everyone seems to walk taller and smile brighter when in the Viv. I certainly do.

So what issues do cabin crew encounter while 38,000 ft in the air? Everything and anything, it seems.

They have to be prepared to go from dealing with a drunken assault or engine failure to giving CPR to someone who’s gone into cardiac arrest.

The next day we move on to conflict management, sitting down with a man named Karl who wears an Adidas tracksuit and has a thick Yorkshire accent. He works for an external company that provides training in self-defence and managing disruptive and challenging behaviour.

‘Some people’s holidays start at 5am drinking Jagerbombs at Wetherspoons,’ he tells us. ‘So you need to know how to protect yourself and others.’

We’re taught to use a traffic light system to assess how inebriated a passenger is. Green is someone who’s merry and excited — they should be monitored and subtly served water with alcohol. 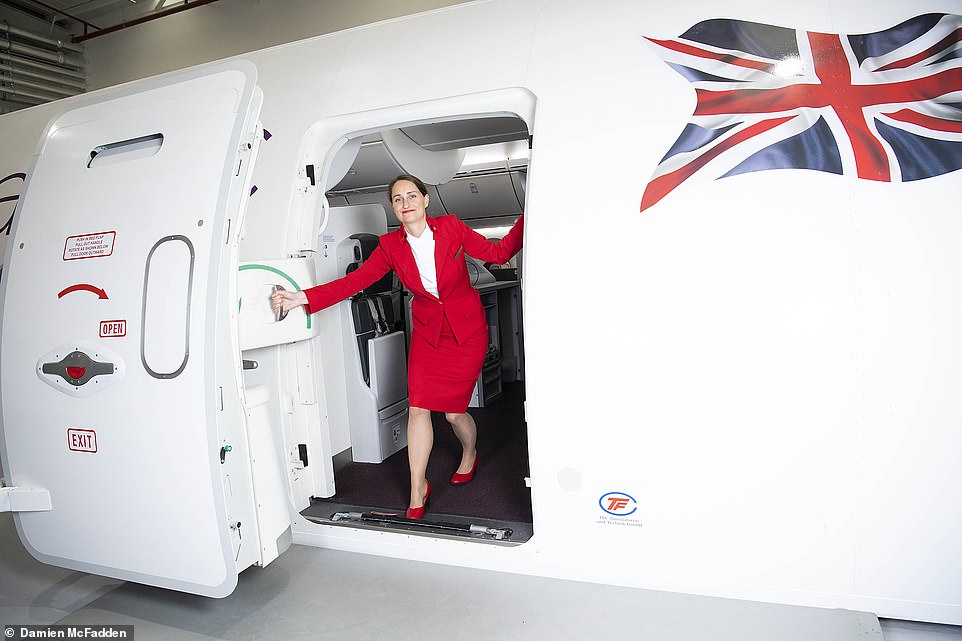 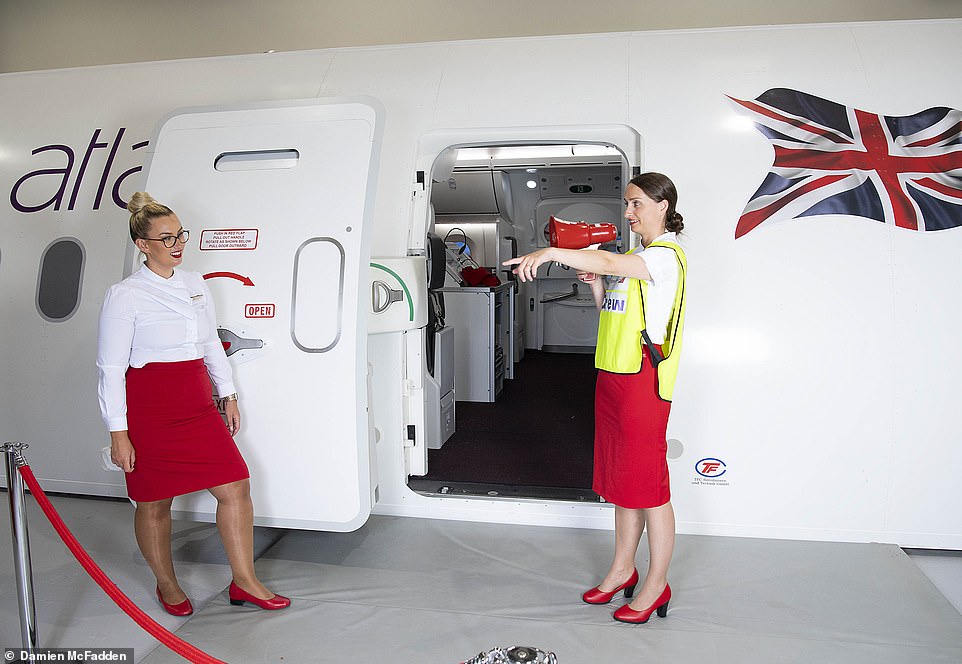 ‘It’s intensive stuff — but everyone seems to be taking it in their stride,’ Harriet says of the training

Amber covers anyone being loud and overly friendly. They should not be sold any alcohol on the plane. Red, meanwhile, is a passenger who’s struggling to walk and is unable to hold a conversation. They are refused boarding.

‘The last thing you want is to be stuck in the air with them for 12 hours,’ says Karl. He teaches us de-escalation techniques (remain calm and relaxed when dealing with anger and don’t stand straight-on); which jurisdictions apply when in the air (once the engine has started, it’s whichever country the plane is registered to); and what constitutes as an ‘on-board offence’ (I’m surprised to find out that being drunk is one of them). A trainee from easyJet tells the class how he was once punched in the face when standing up to a verbally abusive passenger.

Then, it’s on to the practical side of things. We’re taught how to get away from someone who’s grabbing our hair or throat and how to restrain a passenger with handcuffs.

It’s intensive stuff — but everyone seems to be taking it in their stride.

‘It’s not just ‘chicken or beef’ and ‘tea or coffee’,’ says Emma Newbould, a 19-year-old shop manager from Leeds. ‘We have to be highly skilled and really know our stuff. We’re all studying hard every night to pass. They’re preparing us for the very worst and I know now that I’d respond well in an emergency.

‘Some crew want to be on board during emergencies and incidents so they can put their training into practice.’

I leave Crawley with a new-found respect and admiration for those who work high up in the skies. And know the next time I’m asked, ‘Chicken or beef?’, it will resonate like never before.