A WOMAN has alleged her neighbours are trying to steal her garage in a bitter land dispute.

In a series videos, the TikTok user explains how she’s been battling for years to get the garage back.

“We’ve been fighting a property line dispute with our neighbour since we bought our property about three years ago now,” she explains.

In one video Amanda – who describes herself as a mother, teacher and grad student – displays a map which shows her small chunk of land next to the much larger property of her neighbour.

She then points to the results of a land survey that she says “shows the garage is in our property” which she says was built in the 1980s.

The woman says the neighbour transferred ownership of land to their daughter that included her garage back in the 1990s. 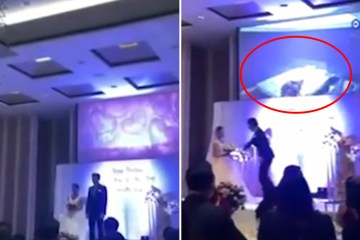 Amanda said the daughter lost the land to foreclosure which she then bought.

In another video she says she has obtained an order which prevents her neighbours from using the garage.

“And we haven’t been able to get through to them that we need to find a resolution to this issue.”

Earlier this year a resident who is in a war with her neighbour over the property line has made a list of all the 30 things they have done.

TikToker Amanda Lynne has shared a timeline of all the rows she has been having with her neighbors since she bought the house.

Some of the issues would be mild at first such as the neighbour was eavesdropping through the fence or walking into the back yard uninvited.

On another occasion, the neighbour’s landscaper continued to blow grass into the woman’s lawn for a month despite being asked not to.

The neighbour started walking his dog only outside the he property, despite the numerous signs she has made