Heart-stopping footage of a Wizz Air passenger jet soaring just yards over tourists’ heads showed just how close thrill-seeking plane spotters are willing to get to the action.

Uploaded last week, the footage was captured by a jet enthusiast positioned to watch planes touching down on Greece’s Skiathos island, which has become a popular destination for plane spotters.

Measuring just a mile in length and built yards from the sea, Skiathos Airport’s landing strip is particularly short, meaning pilots have to come in to land far lower than they would on other runways.

But even the seasoned plane spotters appeared shocked as the Airbus jet barrelled towards the tarmac and narrowly cleared the airport’s perimeter fence, even knocking some spectators backwards in the process.

Skiathos is not the only destination for plane spotters wanting to experience the thrill of getting close to the underside of a large passenger jet as it comes in to land. The Greek airport has been dubbed the European Saint Martin – an island in the Caribbean which is also famous for its huge low-landing planes.

Arrecife airport in Lanzarote – another island runway – is another popular spot. Meanwhile, authorities in Thailand have even warned tourists they face severe punishment for taking selfies as planes come in to land at Phuket International Airport, saying that doing so can prove a distraction to pilots.

The video of the Wizz Air landing opens by showing the plane in the distance cruising towards the Skiathos Alexandros Papadiamantis Airport over the turquoise Mediterranean waters.

Several people are shown to have gathered on the beach and a road that runs along a narrow bit of land between the sea and the runway. As the Wizz Air-operated Airbus A321neo approaches, however, it is clear that the pilot is bringing it in at a low altitude. One onlooker even begins to move out of the way in anticipation of a low landing.

As it narrowly clears the perimeter fence, it is so low that it kicks up dust and sand into the air and ruffles the hair of one man who is seen in the footage flinching. A girl is even seen being knocked backwards.

The airport’s runway measures at 5,341-foot (1,628 meters), putting it in the ‘short and narrow’ category of runways. The short landing strip runs north-to-south and from coast-to-cast, meaning pilots have to approach as low as possible in order to give themselves enough runway to land on and come to a stop.

Watching the planes from the end of the runway is not without its risks. Last month, a 61-year-old British woman was knocked over backwards when she and a group of tourists gathered to watch a plane take off.

Skiathos’ has been dubbed the European Saint Martin – an island in the Caribbean which is also famous for its low-landing planes – with numerous videos showing huge Boeing 747 passenger jets touching down on the runway.

Like Skiathos, the Caribbean airport has a short runway – of just 1.4 miles – forcing planes to approach at low altitude. Spectators will often gather on the island’s Maho Beach, a stretch of golden sand that separates the airport’s runway and the stunning blue Caribbean sea. 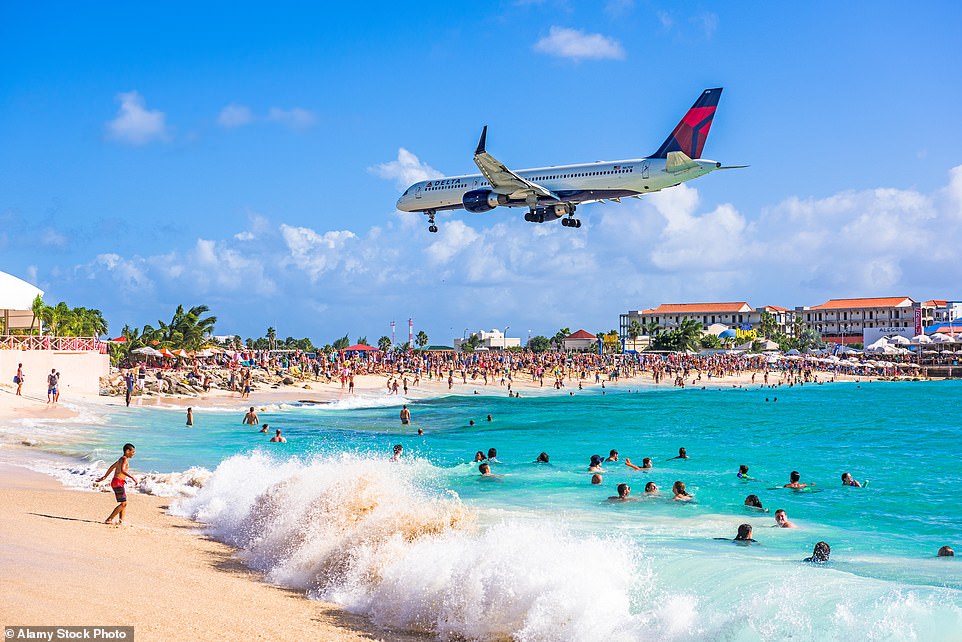 Skiathos has been dubbed the European St Maarten – an island in the Caribbean which is also famous for its low-landing planes (pictured). Plane spotting is a popular activity at the island’s Princess Juliana international airport but it can also be dangerous. In 2017, a woman was thrown to her death after a low flying plane blew her off her feet

But while plane spotting is a popular activity at the island’s Princess Juliana international airport, it can also be dangerous. In 2017, a woman was thrown to her death after a low flying plane blew her off her feet on take-off.

The New Zealand woman was holding onto the fence when she was blown from her feet before hitting her head on the rocks and suffering fatal injuries.

Tourists visiting the picturesque beach regularly climb up onto rocks to watch planes come into land, despite signs specifically warning against the danger.

Police on the Dutch territory make daily visits to the beach to warn tourists of the dangers. The airport was previously named one of the world’s most dangerous by the History Channel programme Most Extreme Airports.

Tourists are also known to gather at Phuket International Airport in Thailand.

As with the others, Phuket’s runway is only separated from the ocean by a picturesque beach, meaning people often gather on the golden sands or stand in the ocean to watch planes fly overhead.

Photographs from the beach show tourists often pose as jets soar in to land, capturing spectacular shots of the underside of passenger planes in the stunning island setting.

However, in 2019, Thai aviation authorities threatened tourists with the death penalty for taking selfies on the beach next to the Phuket airport, saying that doing so ran the risk of distracting pilots coming in to land.

They said the punishment was in-line with other offences, such as shining laser pointers at planes as they come in to land, which runs the risk of impairing a pilot’s vision. 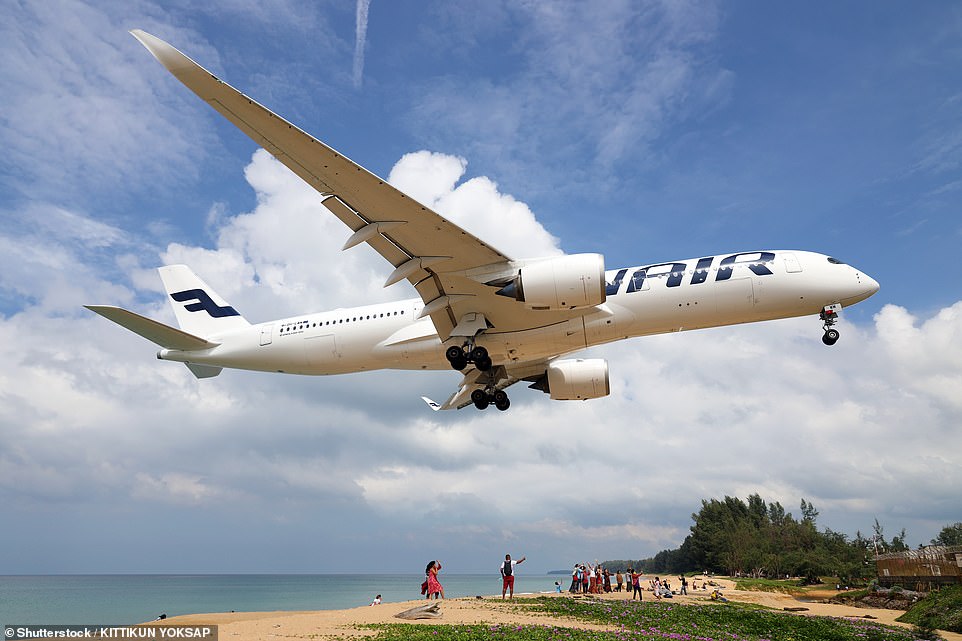 Pictured: People gather on a beach to watch a low-landing plane in Phuket, Thailand

Another airport known for its low landings is Arrecife airport on the Spanish Canary Island of Lanzarote.

As with Skiathos Alexandros Papadiamantis Airport and Saint Martin’s Princess Juliana international airport, Arrecife is built close to the ocean, with the end of the runway almost meeting the ocean.

Tourists will often gather on the rocks near the beach – Playa Honda – and next to the road that runs past, and take pictures as passenger jets approach.

While pilots don’t typically bring their aircraft in as low as in Skiathos and Saint Martin, the airport still offers enthusiasts the opportunity to get right under the jets as they land and take off over the ocean. 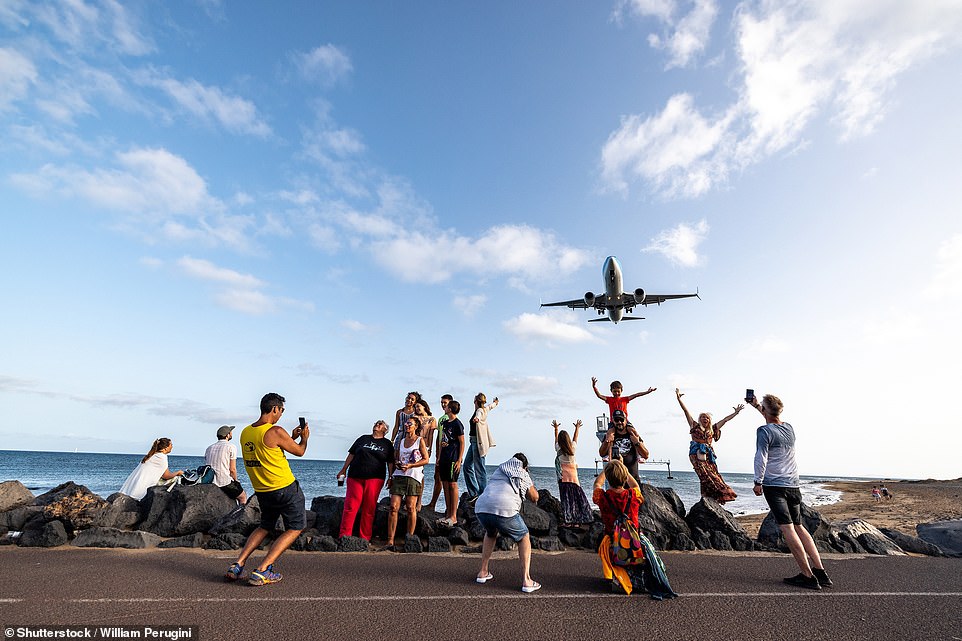 Pictured: People take selfies as a plane comes in to land at Arrecife airport on the Spanish island of Lanzarote, July 2022

The popularity of plane spotting came to the fore in Britain in early 2022 when livestreaming platform Big Jet TV captured passenger aircraft landing at London’s Heathrow airport in heavy winds during storm Eunice.

In one shocking clip, a plane almost flipped after making its approach in strong winds which forced the ‘touch and go’ stunt, meaning the pilot had to take off again and re-approach for a second attempt. Witnesses claim paint dust can be seen coming off the tail of the plane as it hit the ground during the shaky landing attempt.

Another airport famous for its precarious landings is the Tenzing Hillary Airport in Nepal. The runway is built close to the edge of a cliff, meaning pilots have no room for error when coming in to land. 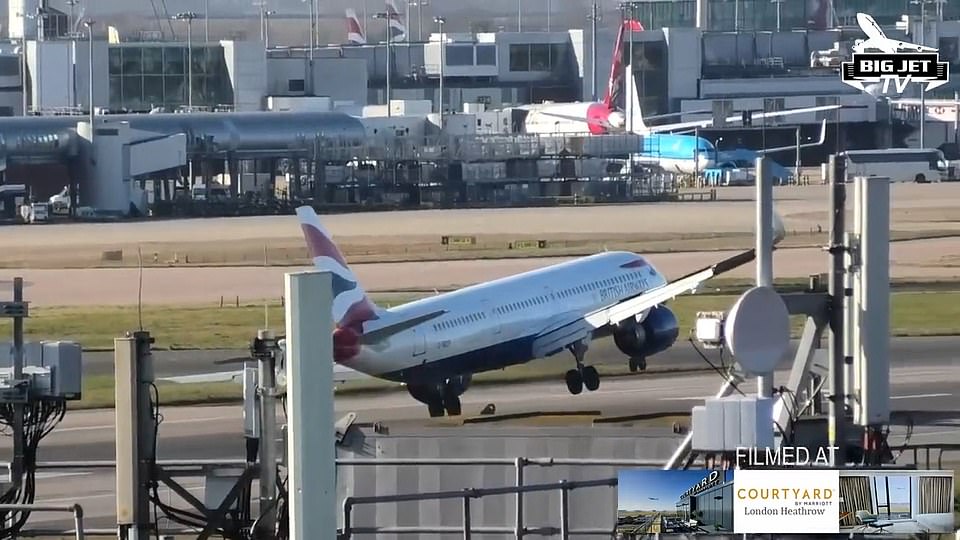 Close shave: This is the shocking moment a pilot struggled to land a British Airways plane at Heathrow Airport in London during a storm in February, which brought gusts of up to 92mph

Only small planes can land and take off from the airport, and pilots are required to have at least a year’s experience and 100 missions flying STOL (short take off and landing) aircraft.

The Cristiano Ronaldo Madeira International Airport in Portugal has also recieved a lot of attention over the years – primarily for changing its name in honour of footballing megastar  – but also for having one of the most hair-raising runways in the world.

Pilots must fight against the island’s strong winds and land on a narrow runway that is supported by 180 columns, 190 feet above sea level. The runway itself also jets out over the ocean.

Gibraltar’s airport to the north-east also has a nerve-wracking feature. The runway is built into the sea and across the width of the British Overseas Territory, and has a public road running through the middle of it. As with a level crossing across a railway track, the road has to be closed whenever a plan lands or takes off from the airport. 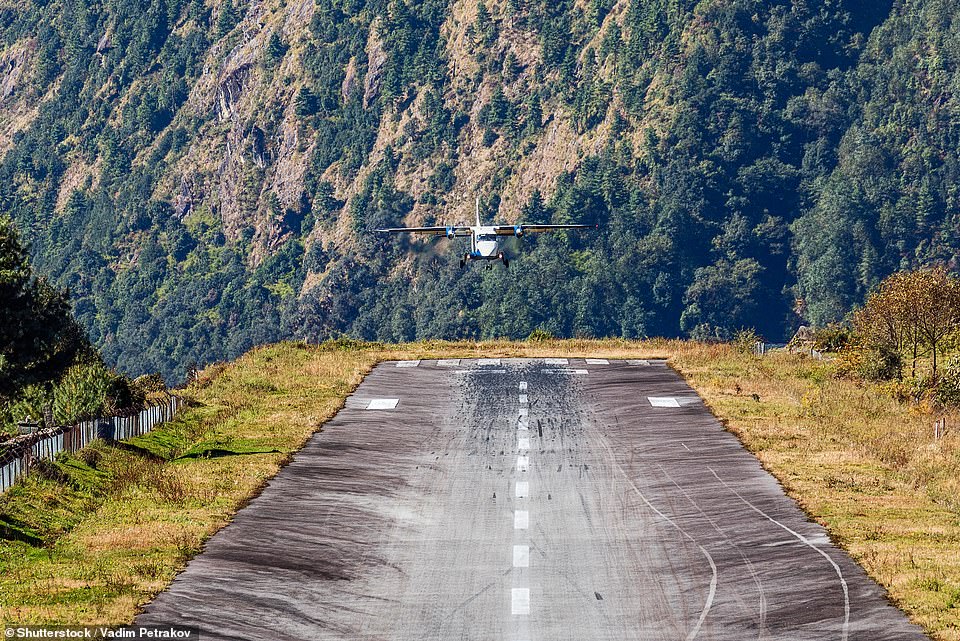 Another airport famous for its precarious landings is the Tenzing Hillary Airport in Nepal (pictured). The runway is built close to the edge of a cliff, meaning pilots have no room for error when coming in to land