A huge country estate in Cheshire once home to the heir of the Matalan empire has been listed for sale at an eye-watering £15million.

The Grade II listed mansion lies near Knutsford and is part of the area’s ‘golden triangle’, where celebrities and footballers tend to reside, with current and former residences including David Beckham, Christiano Ronaldo, Wayne and Coleen Rooney, Raheem Sterling and Marcus Rashford.

Mr Hargreaves, who was once in a relationship with the late TV personality Tara Palmer-Tomkinson, bought the estate in 2000.

Just 30 at the time, he spent the next seven years building a flashy leisure complex including a swimming pool, gymnasium, jacuzzi, sauna and steam room.

Dubbed ‘Britain’s blingest bachelor pad’ in 2010, when it was originally put on the market at twice the price at  £30million, it is just situated in the village of Ollerton and overshadows the numerous £1-2million mini mansions in the area. 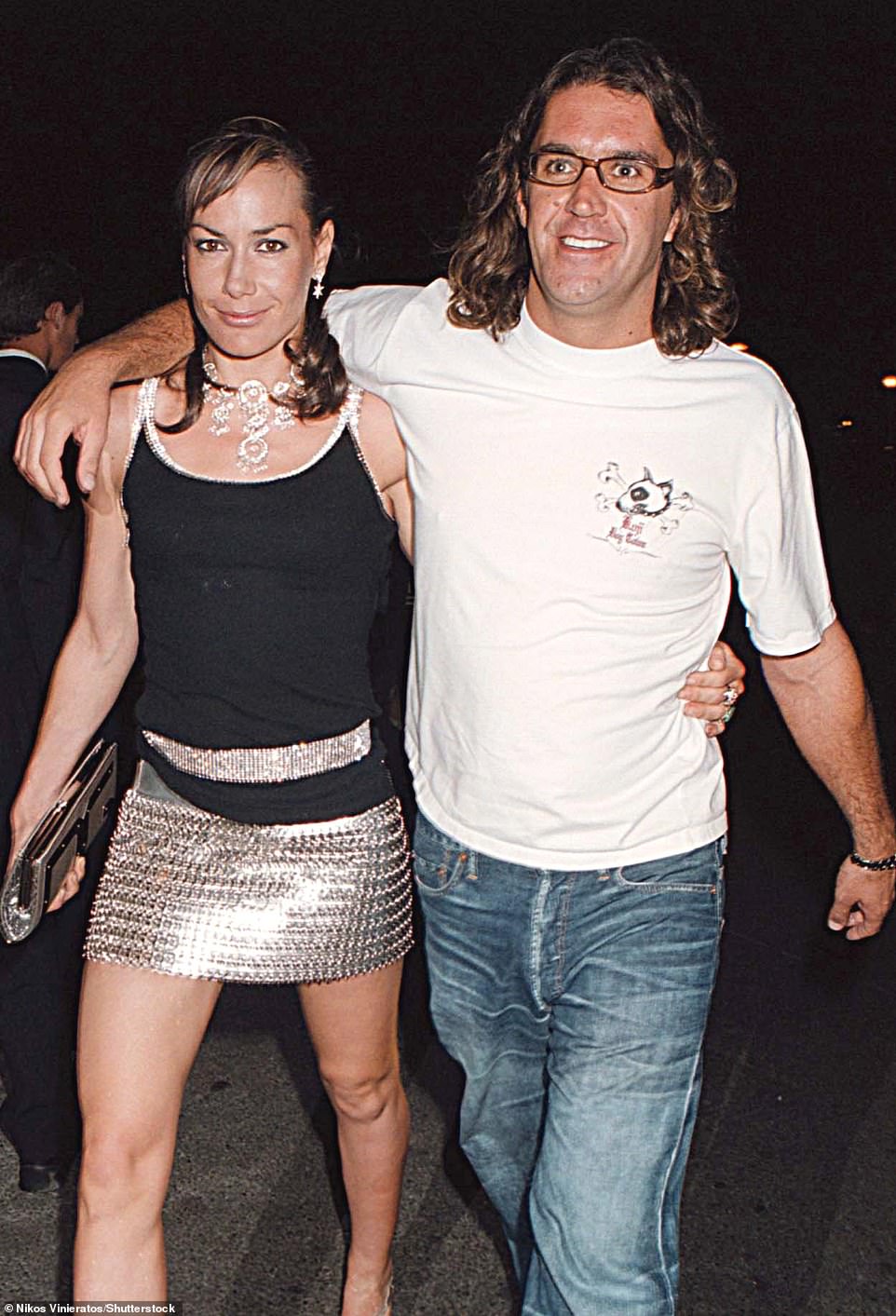 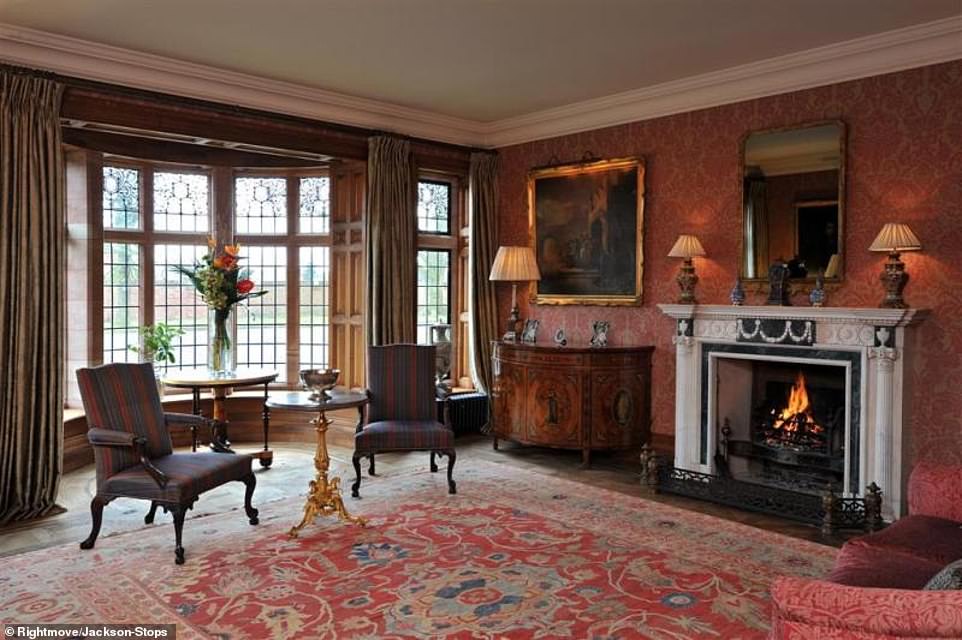 The house has a vast amount of space for living and entertaining including a drawing room (pictured above), ante room, living room, breakfast room, sitting room and study 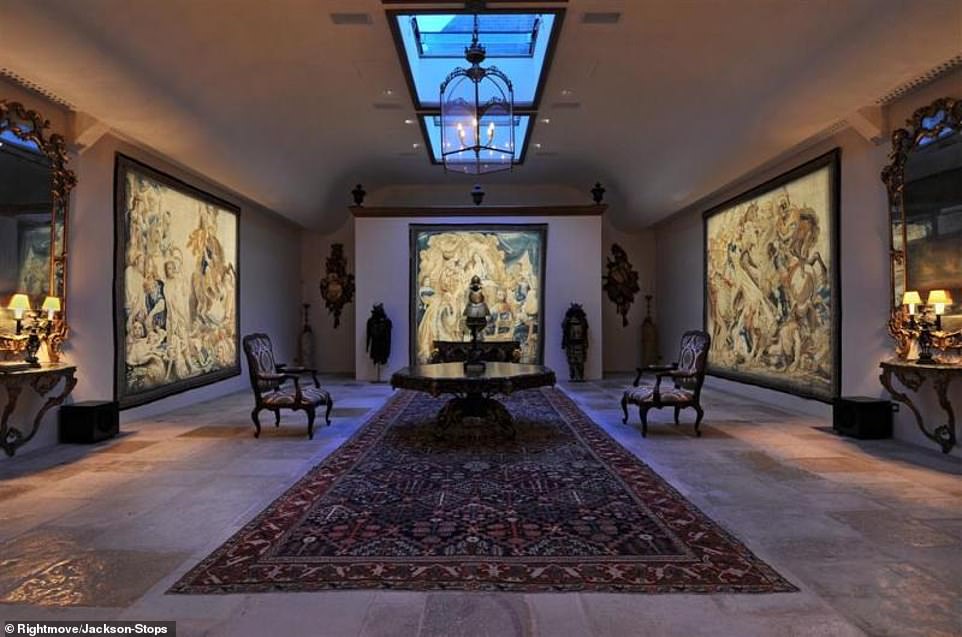 The downstairs also features a great hall (pictured above) and dining room on the ground floor, and an additional dining hall on the second floor 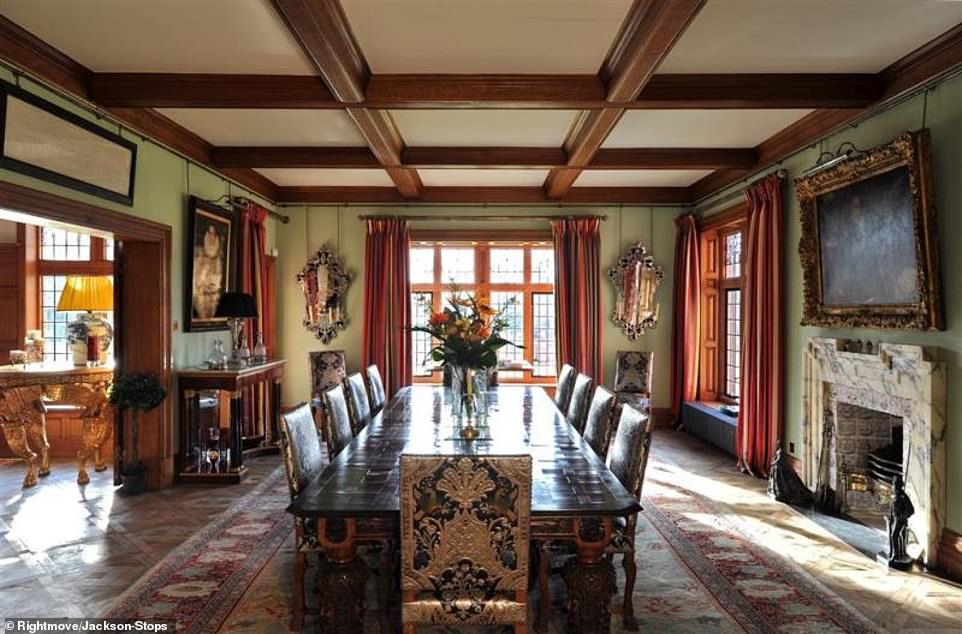 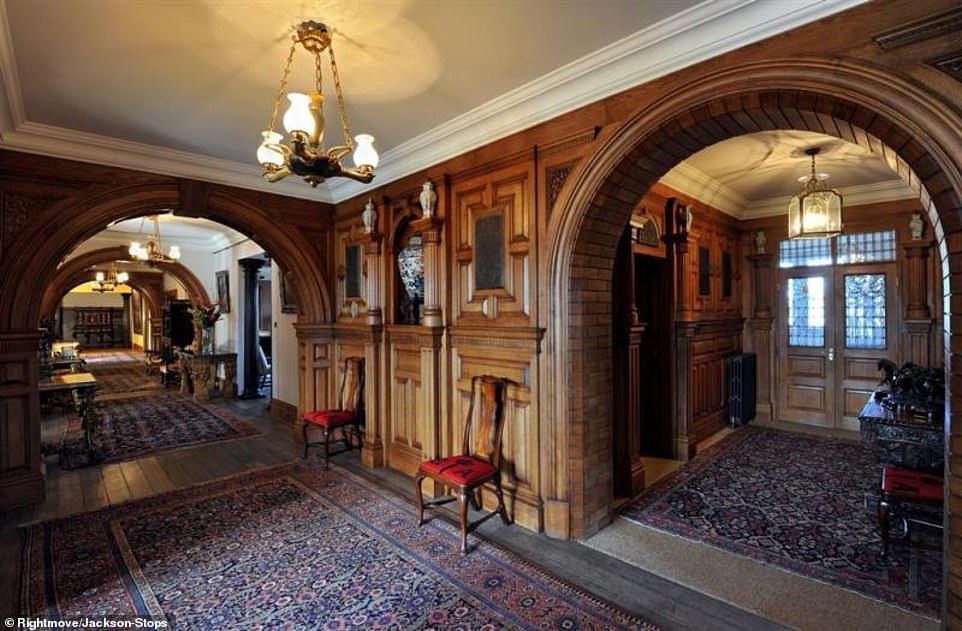 The inside structure features carved wooden arches and wall facades, and is currently decorated with numerous rugs and tapestries

The grand Jacobean-style home was built back in 1901 and boasts eight bedrooms, seven bathrooms and its own ‘outstanding’ leisure complex that doubles the size of the original house.

Liverpool-based Abacus Consult, who carried out the full detailed design of all mechanical services, lists the facilities installed by Mr Hargreaves including a swimming pool and sauna.

It writes: ‘The scheme included the entire refurbishment of the existing house and outbuildings, whilst adhering to strict conservation requirements and also the addition of a new leisure wing, consisting of a banquet hall, gymnasium, swimming pool, jacuzzi, sauna and steam rooms. 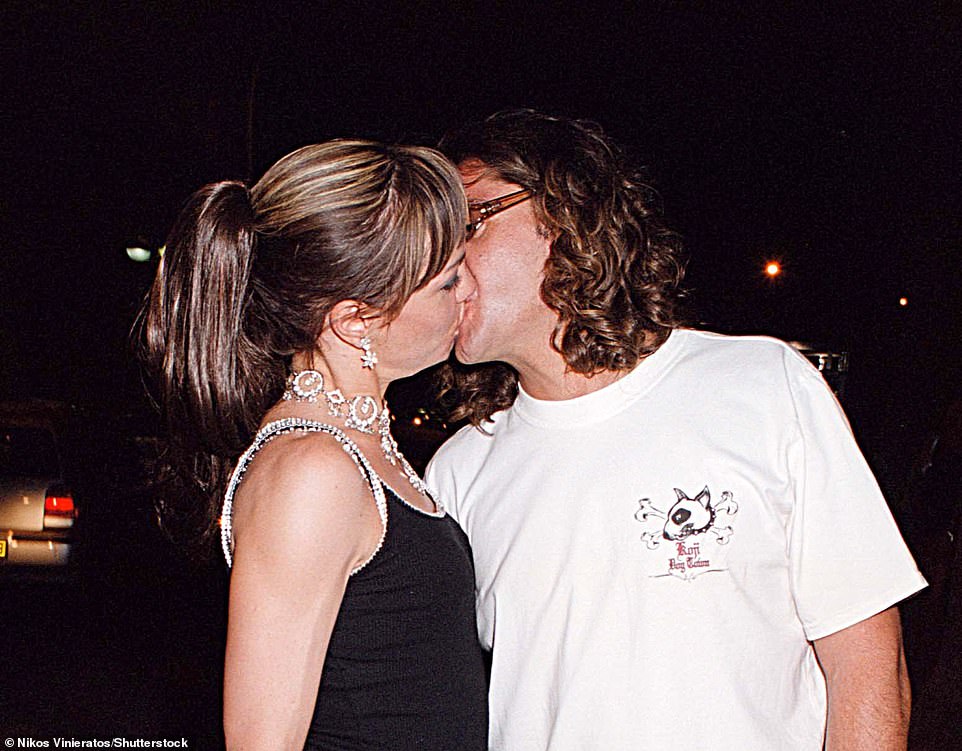 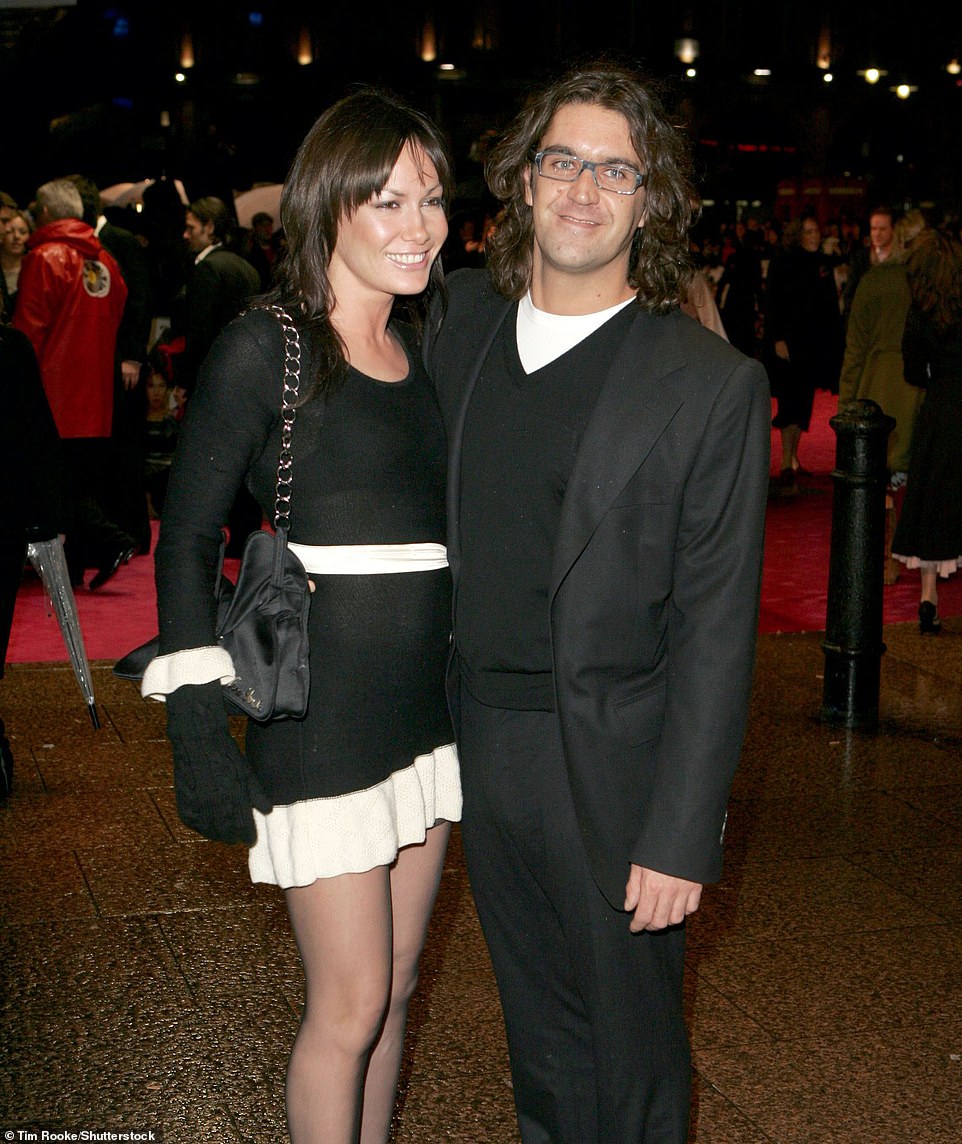 ‘In recent years, Mr Hargreaves has been a resident of Monaco but has business interests in Britain.’

The new leisure complex with its modern gadgets, red-tiled pool and sculpted aluminum ceiling is in contrast to the more traditional interior of the living space. 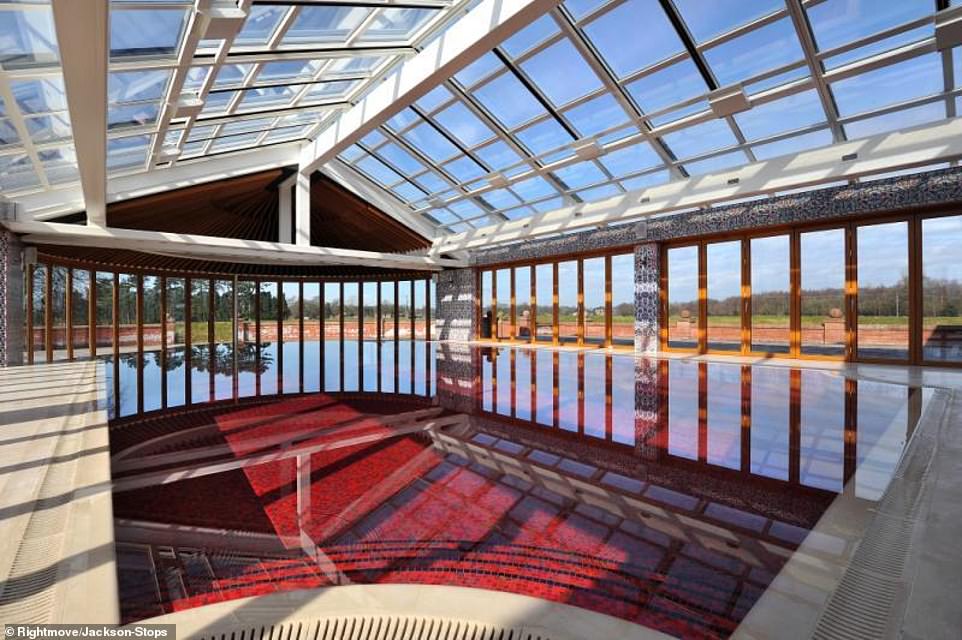 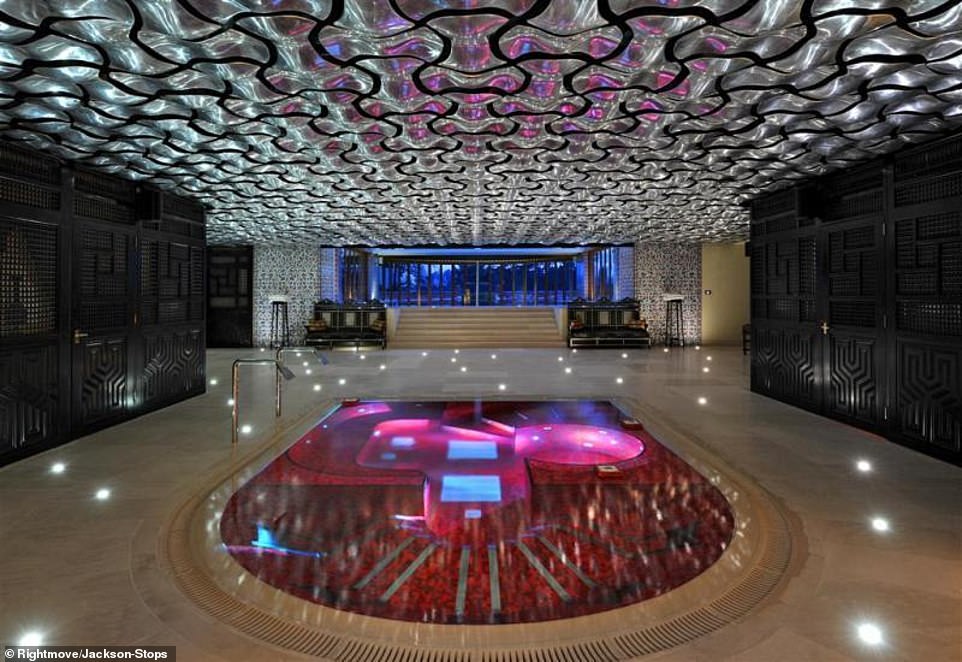 The jacuzzi (pictured above) with its sculpted aluminium ceiling is next to the plunge pool, steam room, sauna and solarium 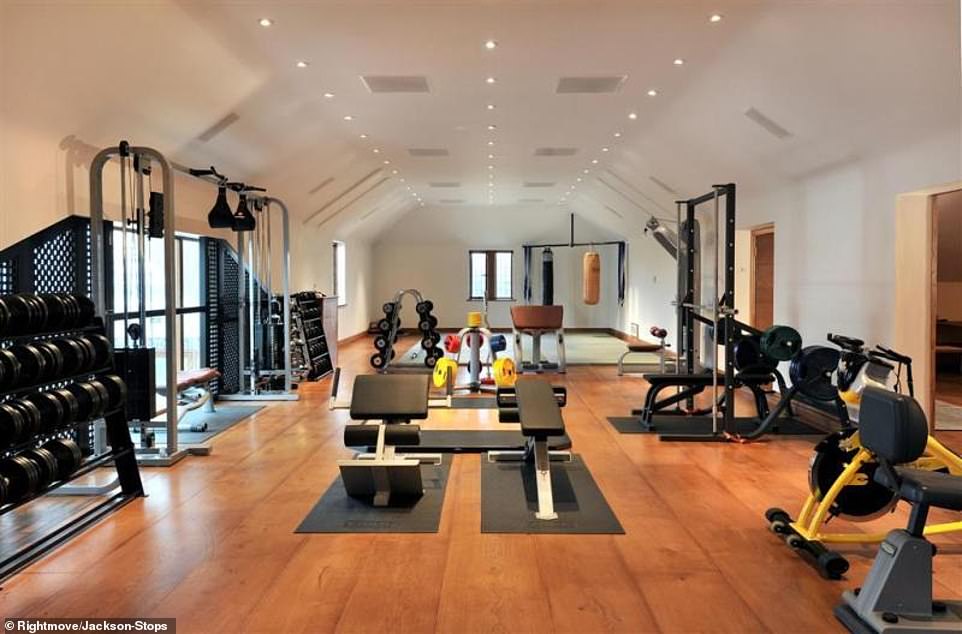 The Victorian pile features immaculately authentic Arts and Crafts wood panelling layered with a mix of antiques that range through the ages.

It also has vast amount of space for living and entertaining including a drawing room, ante room, living room, breakfast room, sitting room and study.

For catering, there is a great hall, a modern kitchen and traditional dining room on the ground floor and an additional kitchen and dining hall on the second floor.

The master bedroom is flanked by a fancy en suite and dressing room, while several of the other six bedrooms also enjoy en suites.

When Mr Hargreaves lived in the house, the gatehouse was reportedly occupied by two Ghurkhas. 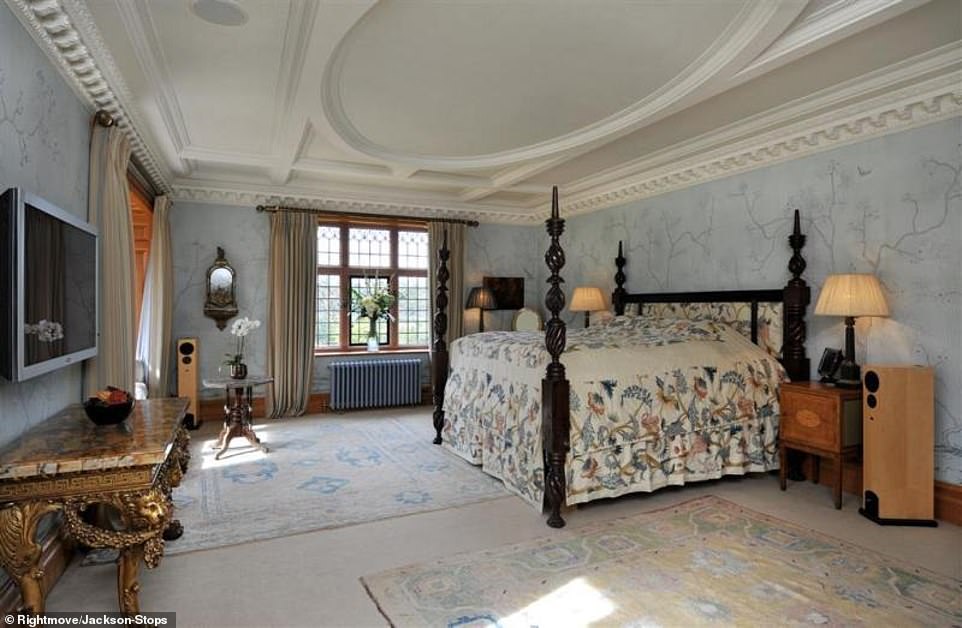 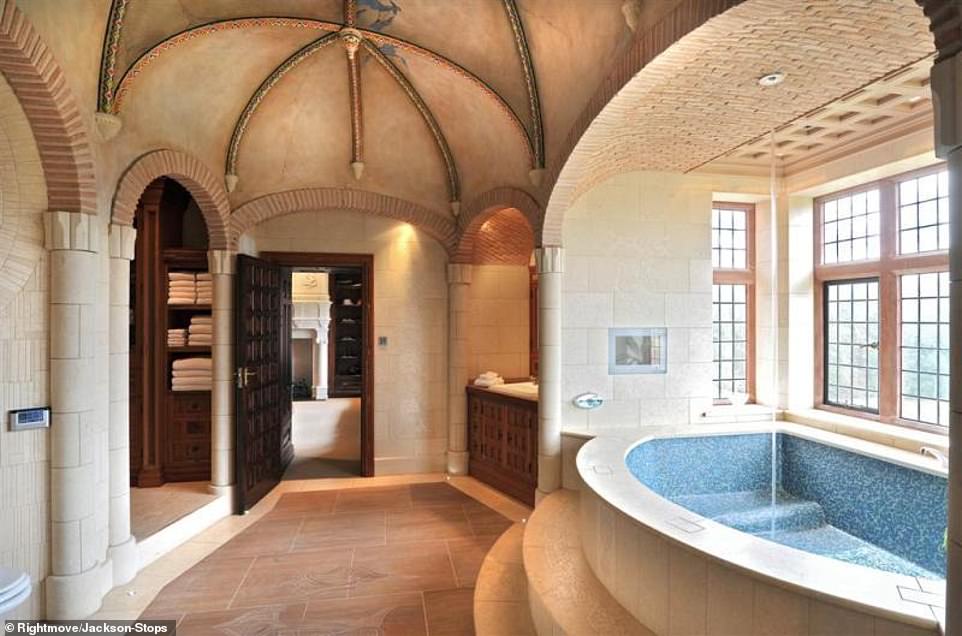 The master bedroom has a luxury en suite (pictured above) 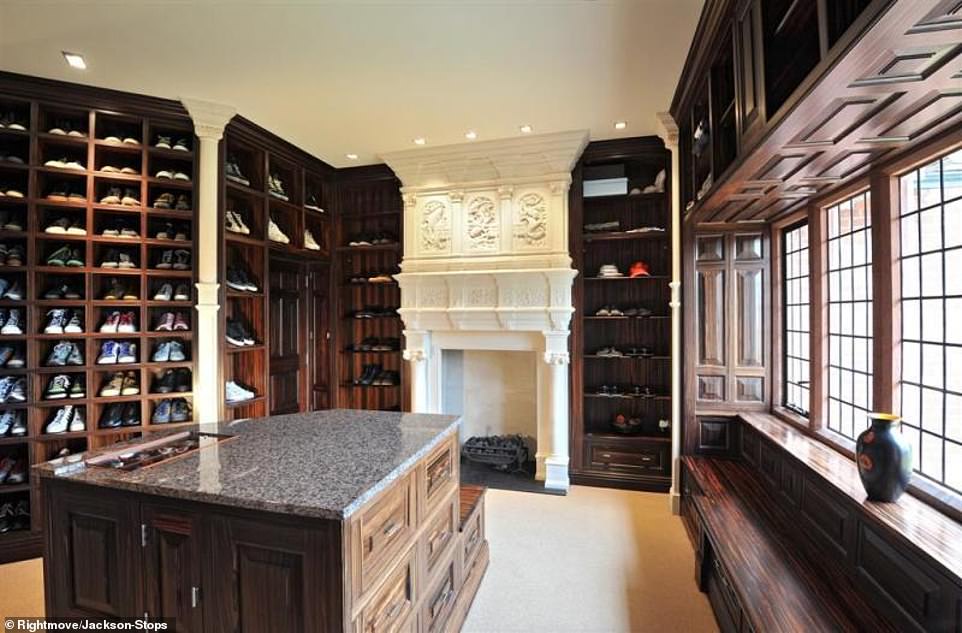 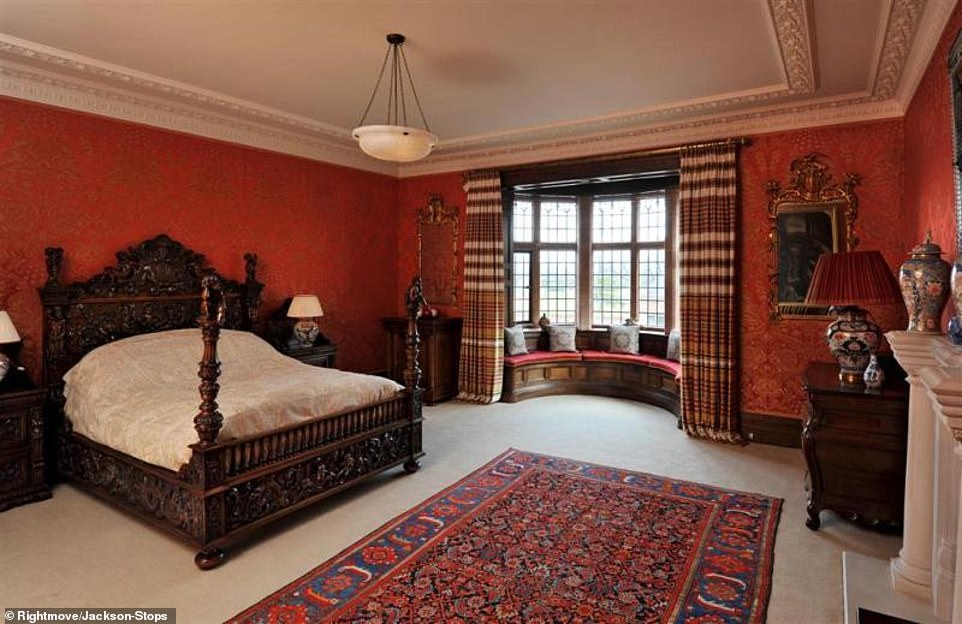 The second bedroom does not disappoint, with its feature window seat and plush furnishings

The most eye-catching feature of the exterior of the house is the stunning octagonal tower with an ogee cap at the front entrance, as well as the mullioned windows and tall, diagonally-set chimneys.

The estate, which is reached via road leading only to this property, is a half an hour walk from Knutsford town centre.

Nearby is a garage that reportedly sells the most Aston Martins in the country.

Jackson-Stops, Alderley Edge is once again bringing the stunning property to the market.

The property’s full description with pictures and floor plan can be viewed on Rightmove. 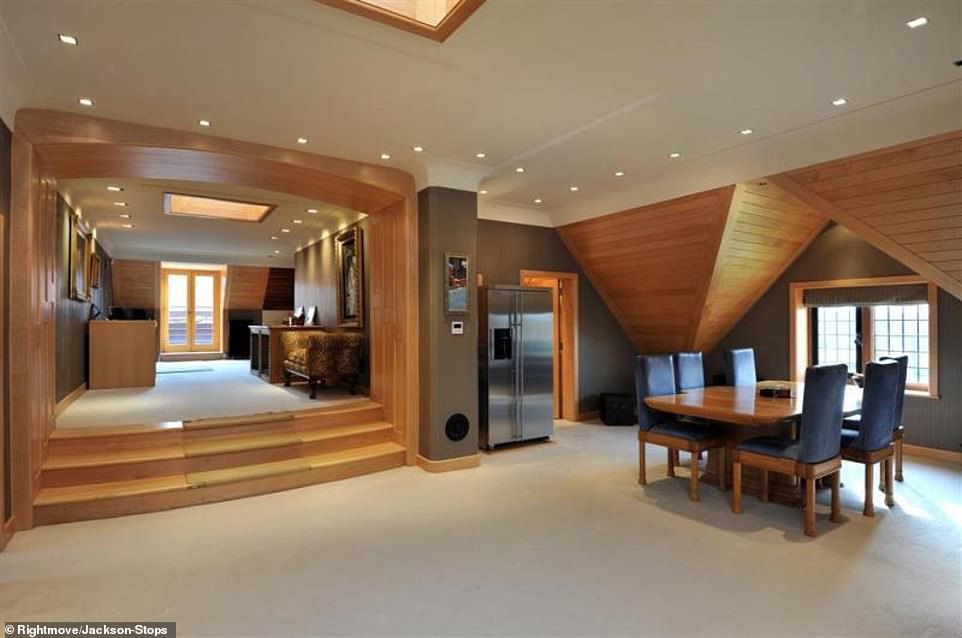 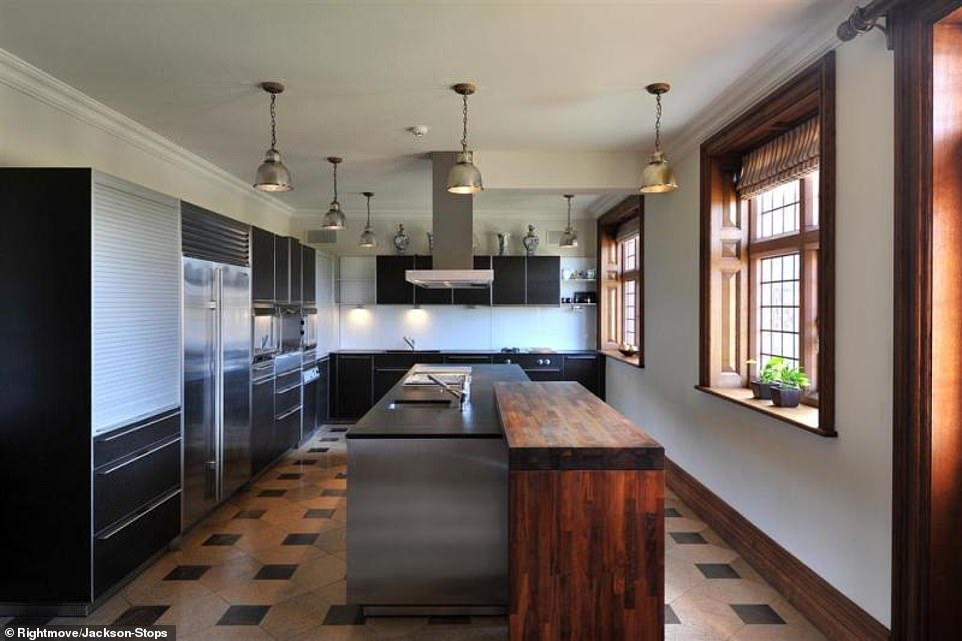 The kitchen (above) has swanky modern facilities, nestled in the traditional wooden features.

In an interview with The Times in 2010, Mr Hargreaves said he wanted the house to look like it has been ‘handed down to me for generations’.

He added: ‘I knew it was going to be a big job, but I was 30 years old, and I thought I’d have this house for the rest of my life, and by the time I’ve finished it, I’d have kids.

‘I wanted to get everything right and I knew it would take several years, as I have high standards.’

Noting its £30million price tag at the time, he said: ‘We had a hard-core team of 30 people on site for five years.

‘Every window was taken out and recast. I went through four pools and put in the lake, which is fully stocked.

‘To be honest, there is little profit for me in this house. Pretty much everything is what I’ve spent on it.’

It is believed Mr Hargreaves paid around £5-10million for the house, putting his renovation bill at around £20million.

He added at the time that he would ‘be happiest not selling it’ but that he lives in Monaco and is only in the house a few days a month.

He said: ‘The best times were the house parties, with 10 or 12 people over.

‘Whoever wants to go out shooting can go for the day, the rest of the people stay in the spa.

‘They can use the treatment rooms and we get a masseuse in. The house needs to be lived in. I have a girlfriend, but I feel the house needs a whole family.’

Who are John and Jamey Hargreaves? 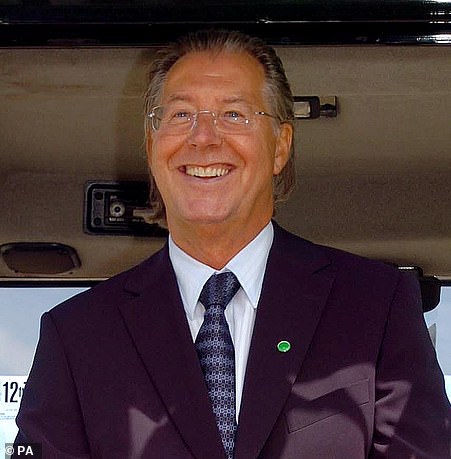 John Hargreaves, 78, is the founder of British budget fashion and homeware retailer Matalan.

The son of a Scouse docker who left school at 14 to set up a market stall, he shot up from humble beginnings to billionaire status.

He now lives a life of luxury in tax exile in Monaco, flying private jets to the Matalan offices as needed.

A Mail on Sunday investigation revealed the super-rich tycoon was using the furlough scheme during the Covid-19 pandemic. 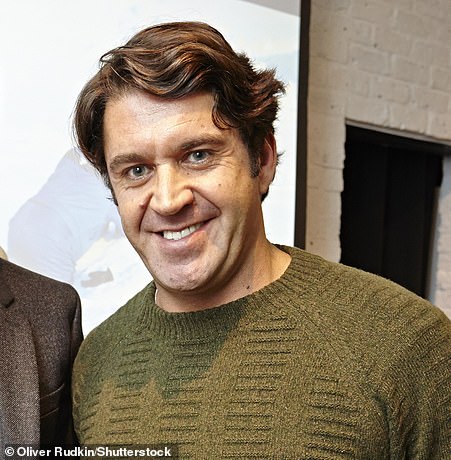 John Hargreaves’ son Jamey at the Dark Ice Project in 2013

Jamey Hargreaves, 51, is the John Hargreaves’ son and heir to the Matalan empire.

The businessman bought a vast country estate in Cheshire in 2000, but now lives in Monaco.

He has worked in the family business for most of his adult life and dabbled in high fashion, working with designer Julien Macdonald for a time.

Moment woman tumbles down the stairs at brother's wedding