At times, this feels like being aboard a giant cruise ship. There are 500 cabins (sorry, rooms), seven restaurants, eight bars, a spa, a water sports centre and a nightly cocktail of cheesy entertainment.

Most important, the almost brand-new (it opened to British visitors in June) Liberty Fabay Hotel on Turkey’s Turquoise Coast is all-inclusive.

Which might explain the relish with which two teenage boys — sitting with their parents at breakfast, dressed in impeccably ironed Ralph Lauren polo shirts — are carefully constructing a minaret of pastries, croissants, and doughnuts, topped off ingeniously with an inverted ice-cream cone. 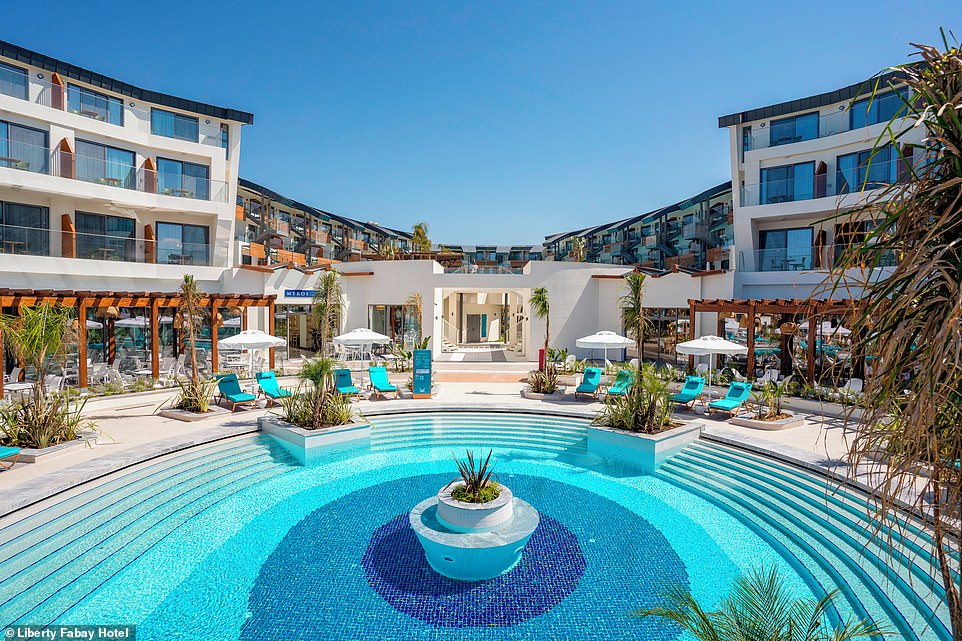 Mark Edmonds checks into Liberty Fabay Hotel (above) on Turkey’s Turquoise Coast, which opened to British visitors in June 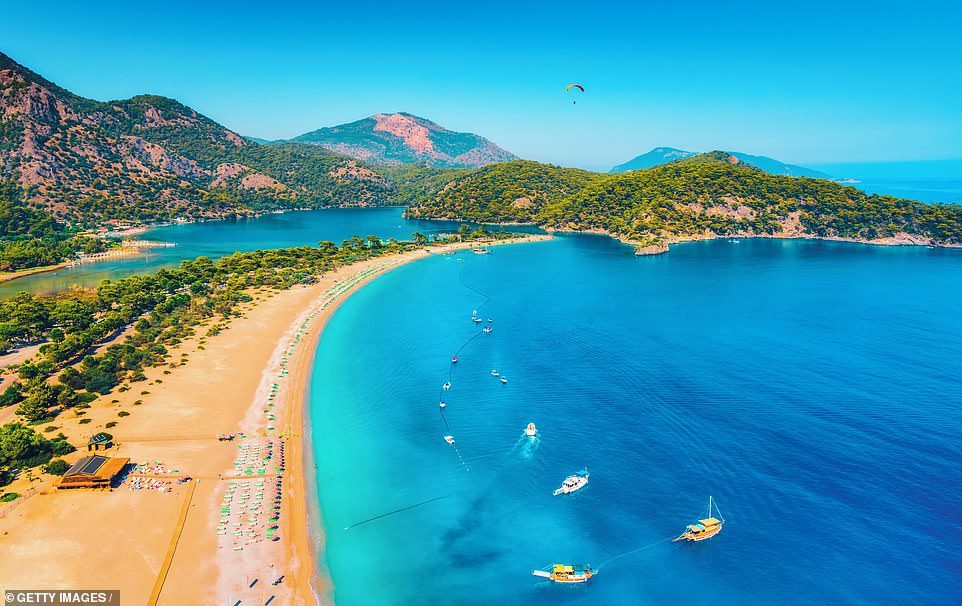 Above is stunning Oludeniz Beach, which lies around 40 minutes by car from the hotel

Perhaps they intend to work off some of those calories later by attending the poolside fitness class which takes place daily at noon.

Or taking a snorkelling trip from the private beach, a stretch of pristine sand just 200 yards from the main hotel complex. If the boys’ breakfast doesn’t compromise their aerodynamics, they may even have a crack at parasailing.

The sprawling hotel has been conceived cleverly — it is intended to appeal to all, with most of the activities centred on the pools and aimed at all age groups.

The in-hotel aqua park with a range of slides offers youngsters a thrill, while parents can enjoy organised beach volleyball, or water Zumba (an exhausting form of pool-gymnastics). There’s also a fitness centre, tennis courts and different levels of yoga.

Anyone who prefers an inactive holiday can slope off to one of the adults-only bars — including one on the beach.

The hotel seems to be doing a roaring trade — but that’s in part because Turkey arguably offers the best value for money of any European hotspot.

Charter flights to Dalaman from the UK have increased by 32 per cent on the 2019 pre-pandemic peak and, in the absence of many Russians, the British market has become ever more important. At many of the beach restaurants along the coast, a simple lunch of grilled fish or lamb costs about £7, a cold beer £2. 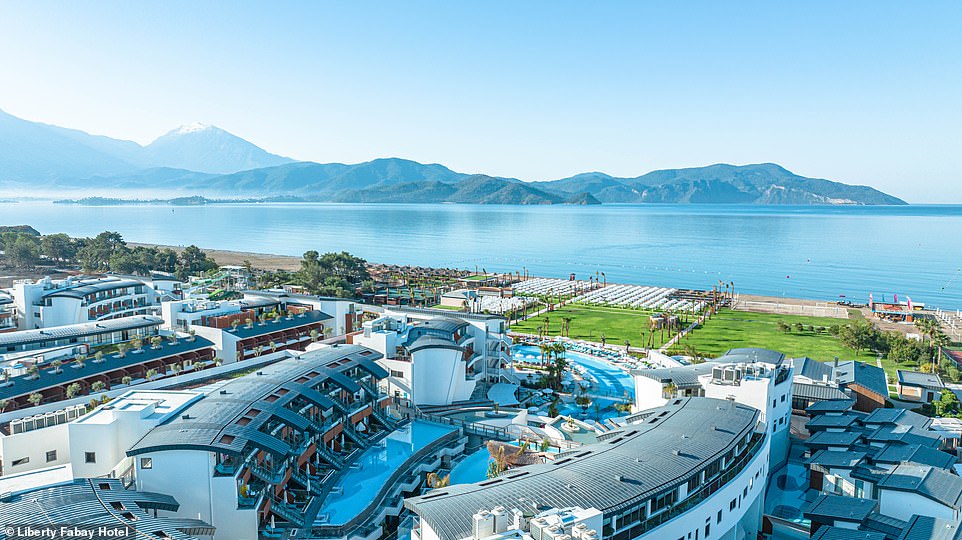 ‘The sprawling hotel has been conceived cleverly — it is intended to appeal to all, with most of the activities centred on the pools and aimed at all age groups,’ Mark says of Liberty Fabay Hotel 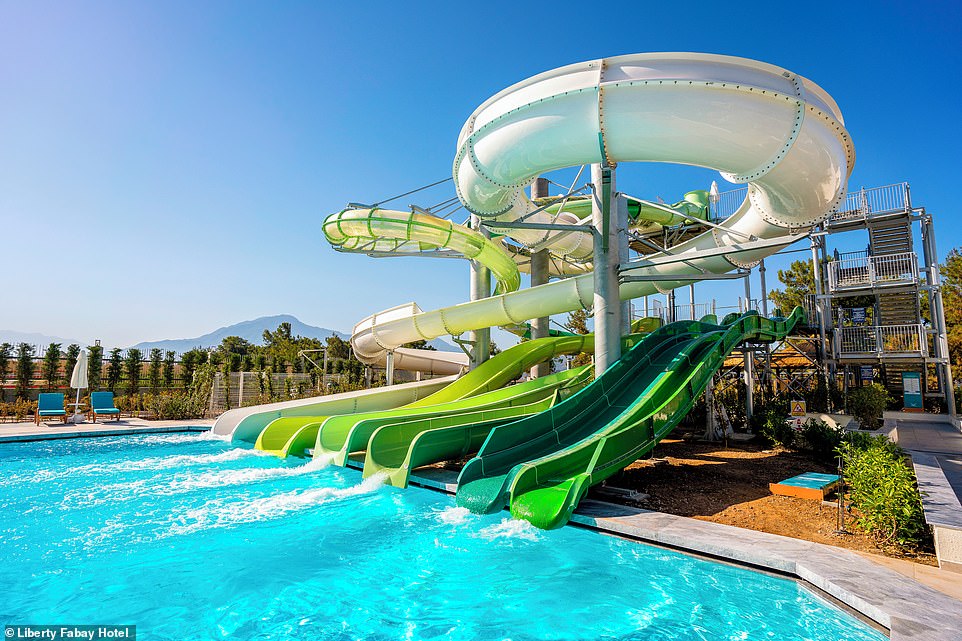 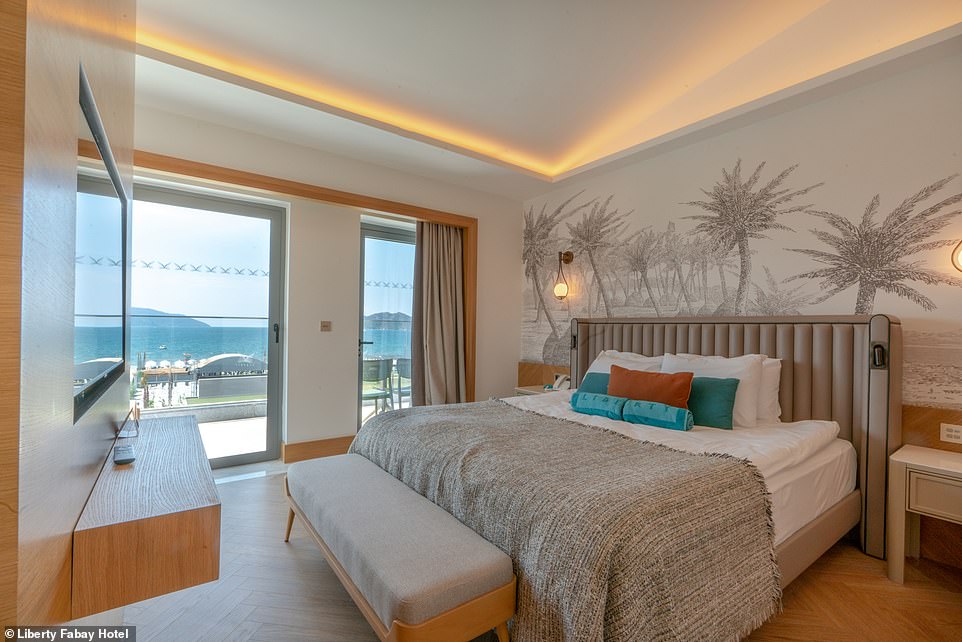 One of the 500 guest rooms. ‘The hotel seems to be doing a roaring trade — but that’s in part because Turkey arguably offers the best value for money of any European hotspot,’ says Mark 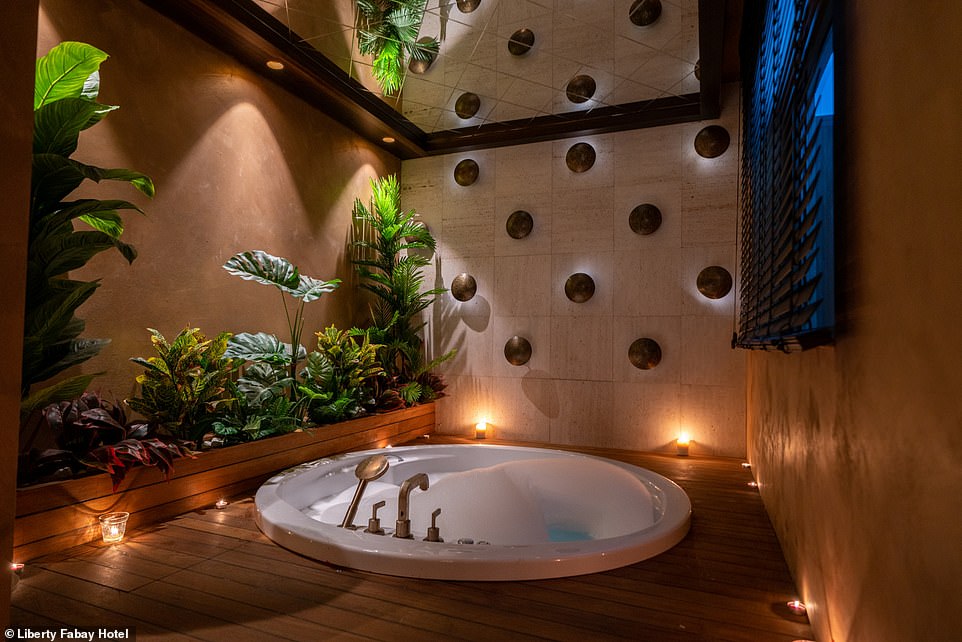 Amenities at the hotel include a spa, fitness centre, tennis courts and different levels of yoga. Above is an indoor hot tub at the resort 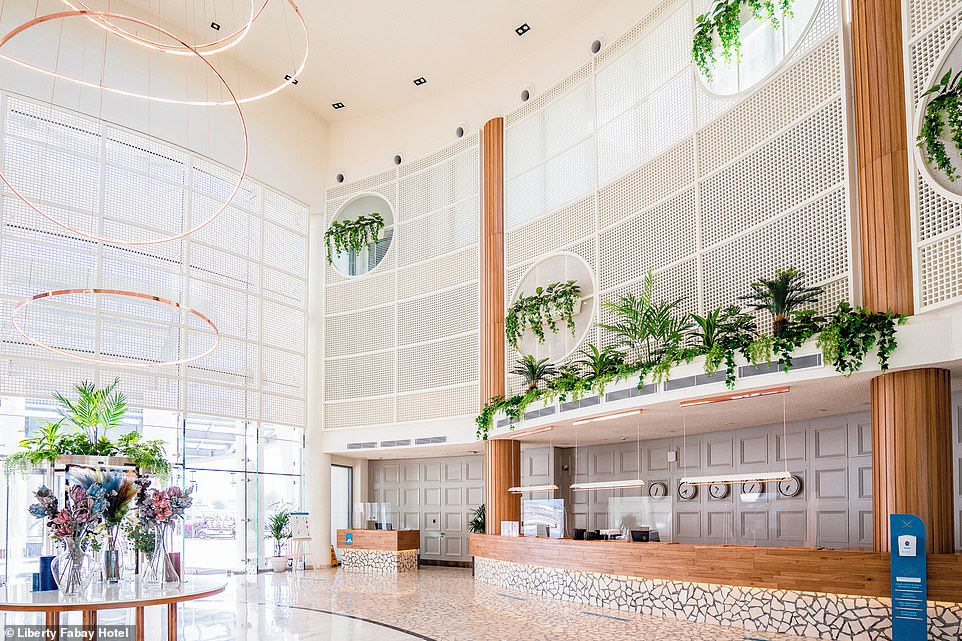 Mark says that staying at the Liberty Fabay Hotel ‘feels like being aboard a giant cruise ship’. Above is the hotel’s lobby

The Lagoon Beach Bar at Oludeniz, 40 minutes by car from the hotel, even has a throwback 1950s-style cigarette girl, selling packets of Marlboro for less than £2 a packet. You can take a boat from here to Butterfly Valley, a nature reserve that is home to more than 100 species of rare butterfly.

The ancient port town of Fethiye is about 15 minutes away by taxi, along a busy and dusty road, but it is a useful embarking point for many local attractions. It sits almost opposite the Greek island of Rhodes, just 60 miles by ferry. From here, we take a boat tour along the beautiful Dalyan estuary (affordable at £30 a day for up to six people), past the Kaunos rock tombs which date back to the 6th century.

The tombs, once part of a settlement built as a necropolis by the ancient Greeks, are among the most striking archaeological ruins in southern Turkey and are best seen from the water.

At the end of this trip, we stop for lunch at Iztuzu beach, where the Dalaman estuary meets the Med. It is a hatching ground for loggerhead turtles, a rare and protected species: we saw several swimming in the harbour. 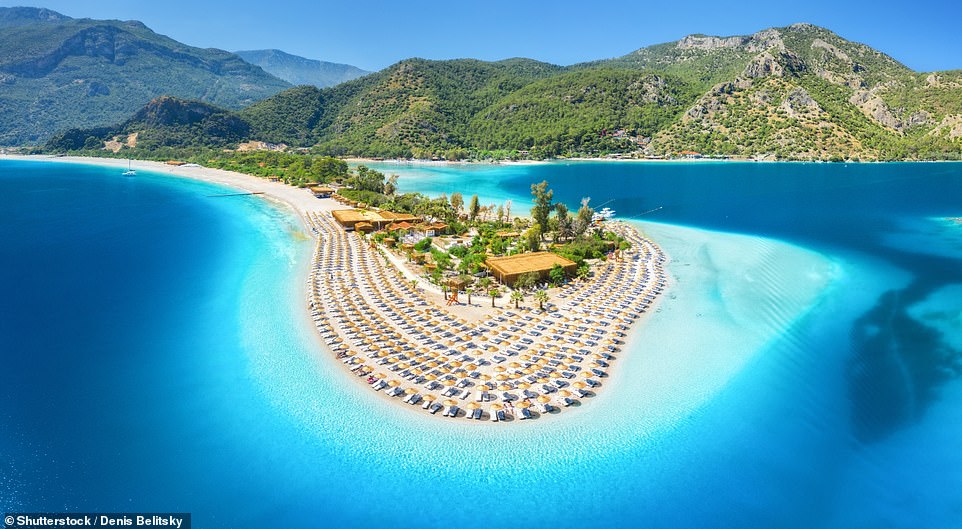 Mark goes for a drink in a beach bar in Oludeniz, above. From here, travellers can catch a boat to Butterfly Valley, a nature reserve that is home to more than 100 species of rare butterfly

Then on to the famous local mud baths once visited by Dustin Hoffman and Sting, who apparently made the most of its legendary cleansing and healing properties.

The mud, which is brought in from the natural thermal pools in the hillsides, is supposed to make you feel younger and improve the skin. It makes us feel smellier — the mud has a pungent, sulphuric quality — but not much else. Still, if it was good enough for Dustin, it’s good enough for me.

More intriguing is Kayakoy, a large ghost town in the hills outside Fethiye which has a controversial past and is the setting for Louise de Bernieres’ novel Birds Without Wings. 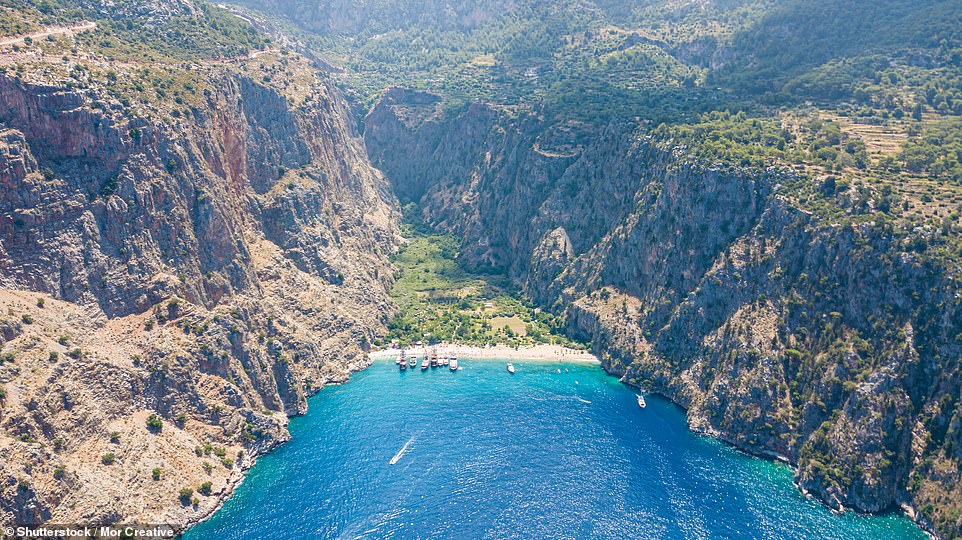 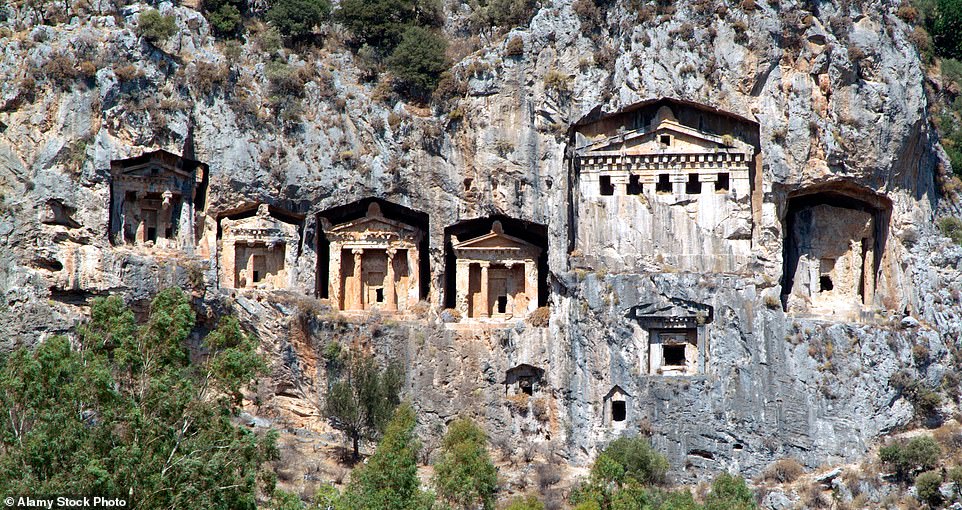 The Kaunos rock tombs are among the most striking archaeological ruins in southern Turkey and are best seen from the Dalyan estuary, according to Mark 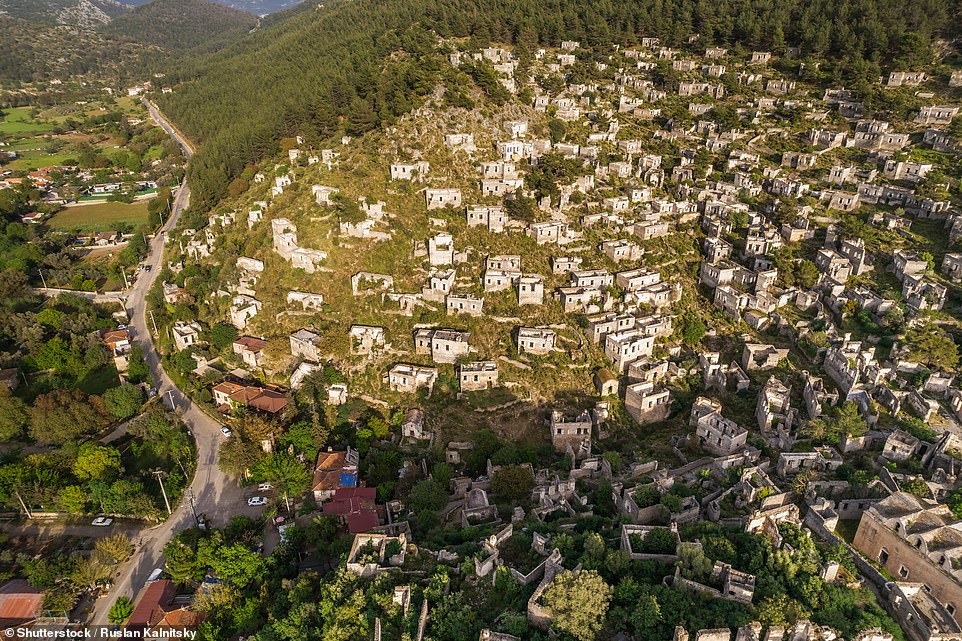 Mark explores the ghost town of Kayakoy, pictured, which is the setting for Louise de Bernieres’ novel Birds Without Wings

The ancient port town of Fethiye, pictured, sits almost opposite the Greek island of Rhodes. ‘It is a useful embarking point for many local attractions,’ says Mark

Mark travelled with Jet2Holidays. Seven nights’ all-inclusive, including flights and transfers, at the Liberty Fabay from £1,168 pp, based on two adults and one child sharing, departing in September 2023 (jet2holidays.com, 0800 408 0778).

Our Turkish guide tells us that the Greeks who left the village during World War I did so voluntarily; the truth is rather more complicated, with the Greeks insisting that they were driven out by their Ottoman oppressors who sent many of them to Labour camps. As we walk around the ruins, the crumbling walls of these houses are a stark reminder of the vivid recent history of this extraordinary country.

Back at the hotel, the staff struggle with English but have no problem with ‘a dry martini please’, served bone dry and in a properly refrigerated glass. And, oh the joy of not having to whip out a credit card or sign a chit.

All-inclusive resorts have their detractors, but they make a lot of financial sense. Children can have as many ice creams as they wish, adults can eat and drink all day.

In the bars and restaurants in this hotel — comfortable, spacious and good value — there is very little evidence of belt-tightening. Quite the opposite in fact: it is clear that belt-loosening is very much the order of the day.

The best UK cities and towns for a staycation named by Which? - York is top and Ipswich bottom