THE Beckhams had a slice of family fun at a star-studded opening night of a steakhouse.

David and Victoria looked a cut above with kids Romeo, 19, Cruz, 17, and Harper, 11, at Gekko restaurant in Miami.

But eldest son Brooklyn, 23, and wife Nicola Peltz gave the reunion a miss — attending a Hollywood party instead.

Last week, it was revealed  David and Victoria Beckham have cashed in more than £11million in a year – DOUBLING their profits.

To celebrate their hard work paying off, the couple took out £15m and paid £2.5m in tax. 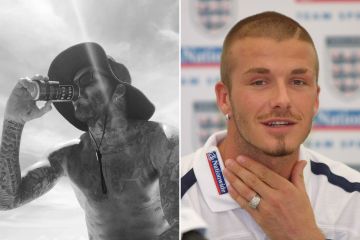 It’s believed the Beckhams are thought to be worth around £339m altogether.

Their global brand empire has gone from strength to strength as the power couple continue to forge ahead with their joint business interests.

A report said that much of the cash was brought in from David’s lucrative tie-ins with big-name firms and his MLS football team Inter Miami CF.

The ex-Manchester United midfielder is believed to pay himself £35,000 a day and still ranks among the top Premier League earners.

Accountants revealed: “The principal activity of the company is that of a holding company.

“During the year the principal activities were as follows: 1: management and licensing of the David Beckham business brand. 2: investment in the Victoria Beckham global fashion and beauty brand. 3: ownership, participation in the Major League Soccer club Inter Miami CF.

“During 2020 relationships with existing brand partners were strengthened and new deals signed to a portfolio which now includes F45 Electronic Arts, Adidas,Tudor and Diageo’s Haig Club.