So declare Colin Alexander and Alon Siton, the authors of new book Railways of the British Empire: Australasia and Beyond (Amberley Publishing).

The fascinating tome, using vintage photographs, tells the story of the expansion of the railways of the British Empire, documenting how Britain’s engineers ‘exported the railway around the globe’.

The authors write: ‘In those parts of the world that were coloured pink on schoolroom maps, the rapidly expanding colonial railways were supplied by British companies. Long before the Portuguese built the first railways in Angola, the Belgians in the Congo and the French in Algeria, UK firms were exporting locomotives, rolling stock, signalling equipment, turntables, cranes and even bridges across the globe.

‘Where Britain was once the workshop to the world, trains built here now are based on Japanese technology and we rely on imported motive power from North America and Continental Europe. It is a sad state of affairs for the country that so proudly invented the railway and supplied the world.’ 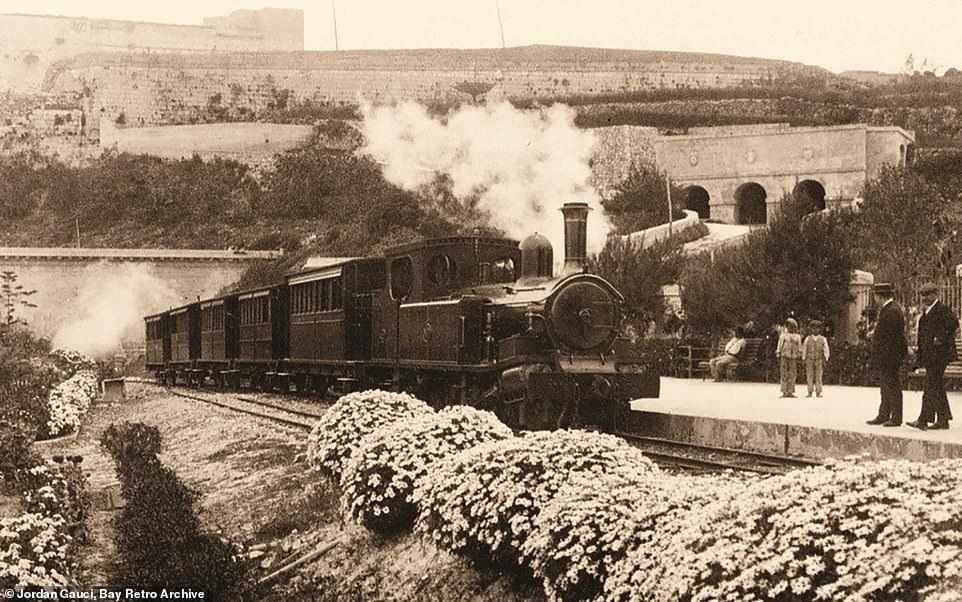 A total of ten steam locomotives were supplied to the island of Malta by manufacturers Manning Wardle of Leeds, Black Hawthorn of Gateshead and Beyer Peacock of Manchester, the book reveals, adding that the latter supplied four ‘2-6-4T’ engines – one of which is seen above pulling a train in the capital, Valletta, in 1918 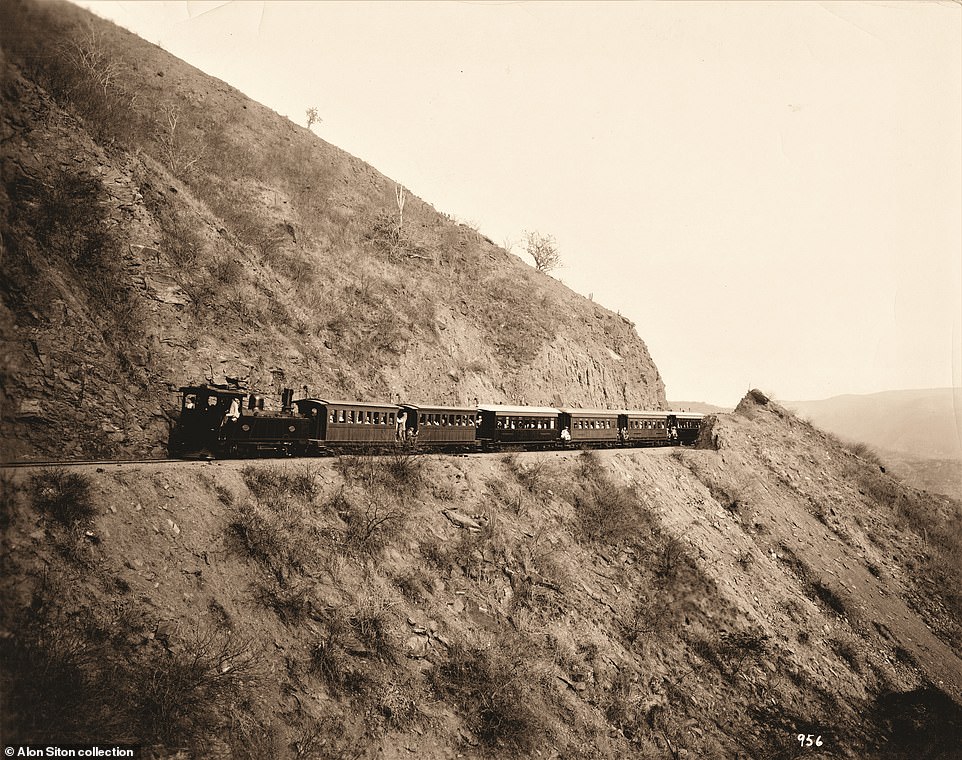 Pictured above is the three-foot-gauge railway that linked the Venezuelan capital, Caracas, with the coast, on gradients as steep as one in 25, the book explains. It continues: ‘[Manchester’s] Beyer Peacock supplied four 0-6-2Ts in 1888, and one is seen here on the tortuous route. After 41 years of service each of these locomotives was said to have accumulated a million kilometres [620,000 miles]. The line was electrified in the 1920s, but inevitably competition from road traffic led to closure in 1951’ 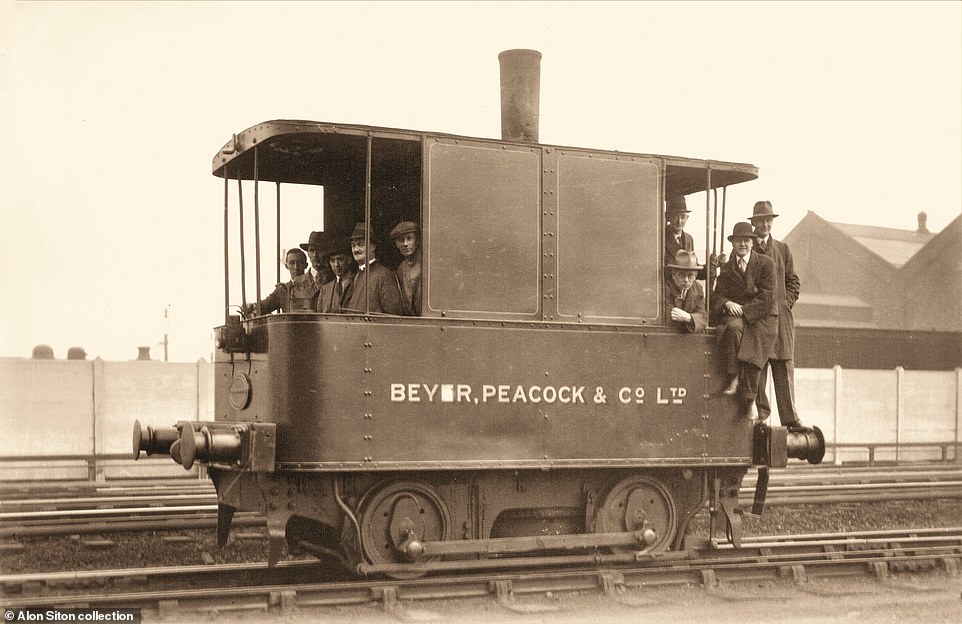 This ‘vertical-boilered steam tram locomotive’ was built in 1885 by Beyer Peacock and ‘sent to Sydney’s New South Wales Government Tramways for comparison against an American Baldwin engine’. The Baldwin was more successful, reveals the book, ‘so the British engine was sent home, but not before she was used on colliery and construction jobs’. She returned to Beyer Peacock and became a works shunter at Gorton Foundry, we’re told, and is now preserved at Crich Tramway Village in Derbyshire 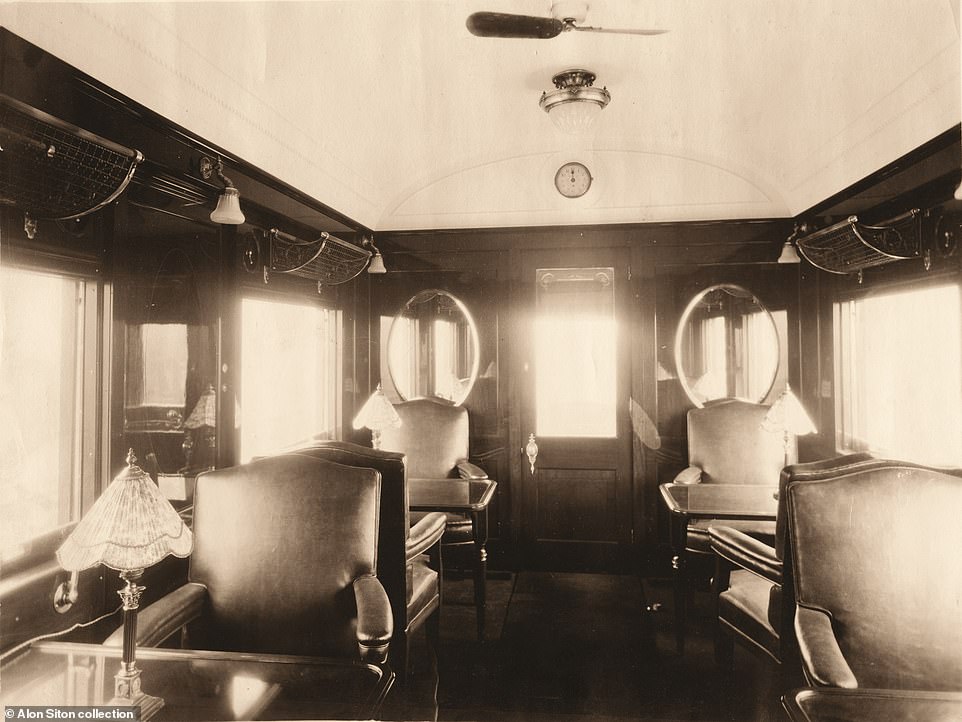 This is the ‘sumptuous interior’ of Palestine Railways saloon No. 98, built by Birmingham Railway Carriage & Wagon (BRC&W) in 1922, the book explains. Her famous passengers have included Emperor Haile Selassie of Ethiopia and Sir Winston Churchill, the authors add. BRC&W, we’re told, was founded in the 1850s ‘and enjoyed an international reputation for its vehicles’. The example of its work above is now preserved at the Israel Railways Museum, Haifa 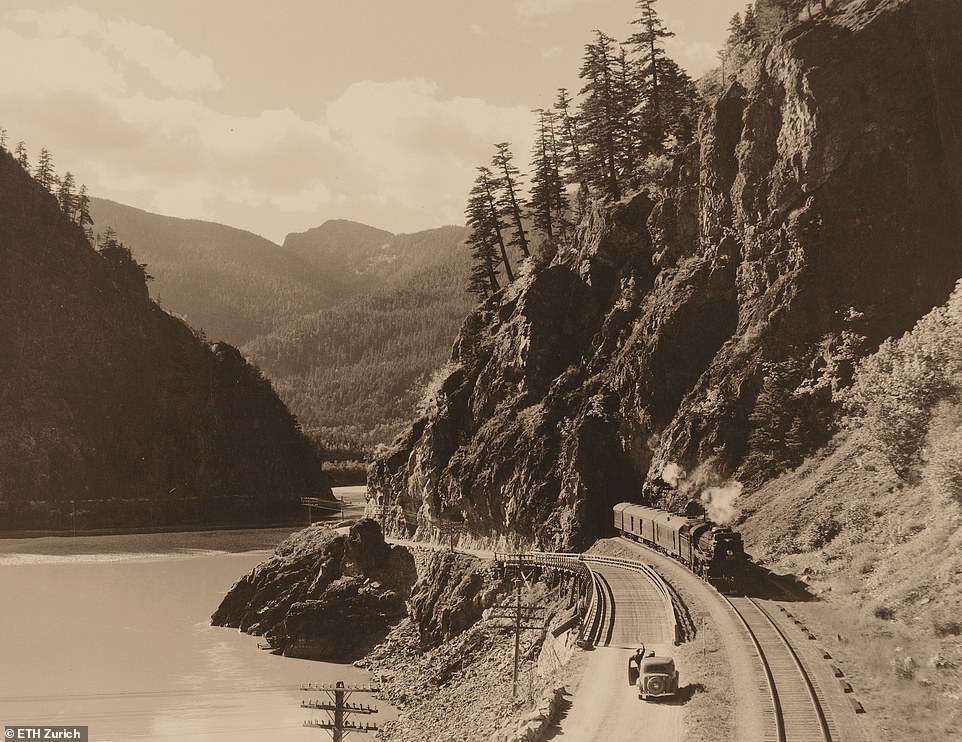 ‘By far the largest territory in the British Empire was Canada, whose first railway locomotive, like that of so many nations, was built at the works of Robert Stephenson in Newcastle-upon-Tyne,’ the book reveals. It goes on to explain that following the completion of the United States of America’s transcontinental railroad in 1869, the same feat was achieved in Canada in 1885. ‘This was the year that the Canadian Pacific Railway first connected Vancouver on the west coast to Montreal in Quebec,’ the book says. ‘The line through British Columbia’s Fraser Canyon [above] was completed in the 1880s’

Above is Montreal’s ‘iconic Windsor Station, once the hub of Canada’s east to west railway system’. The authors continue: ‘Opened by the Canadian Pacific Railway in 1889, it is one of the nation’s most striking examples of Romanesque Revival architecture. The station was enlarged several times, and in this early 20th-century view the building of the main tower is in progress as passengers await their train. Most of the buildings survive but trains no longer call here’ 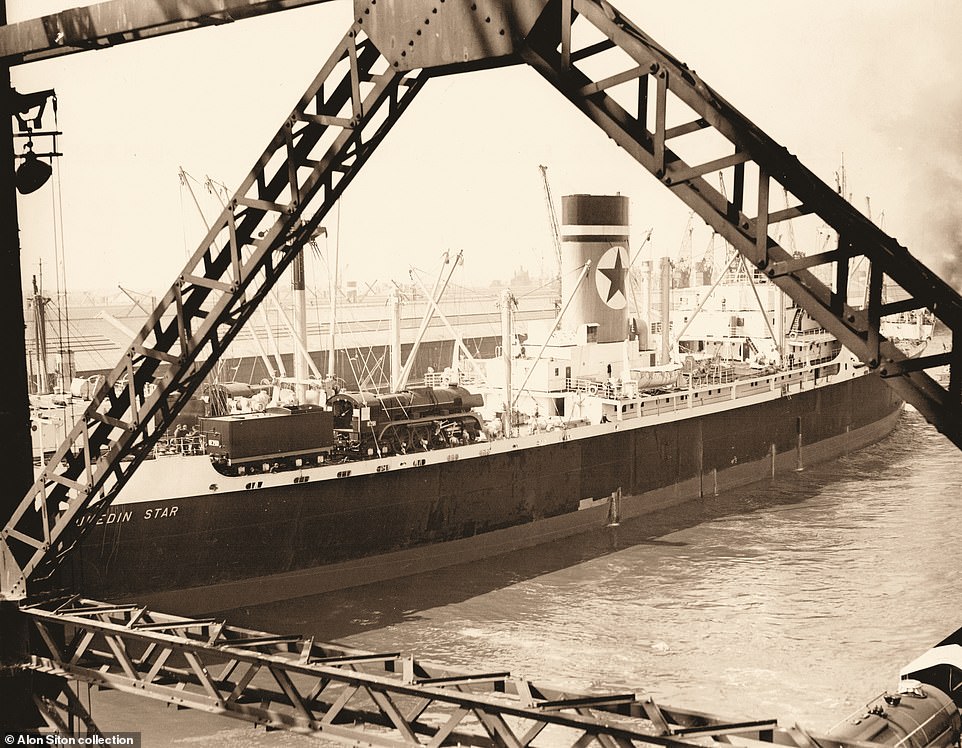 This ‘spectacular photograph’ was taken from a crane in Glasgow’s Clydeside area in 1951, the authors reveal. They explain that it shows Class R 4-6-4 No. R701 ‘and a sister’ – built by the North British locomotive company for Australia’s Victorian Railways – on board the Dunedin Star, built on the Clyde a year earlier, ahead of their journey to the other side of the world. These locomotives ‘possessed a good turn of speed, but were soon replaced by diesel and electric traction’, the authors add 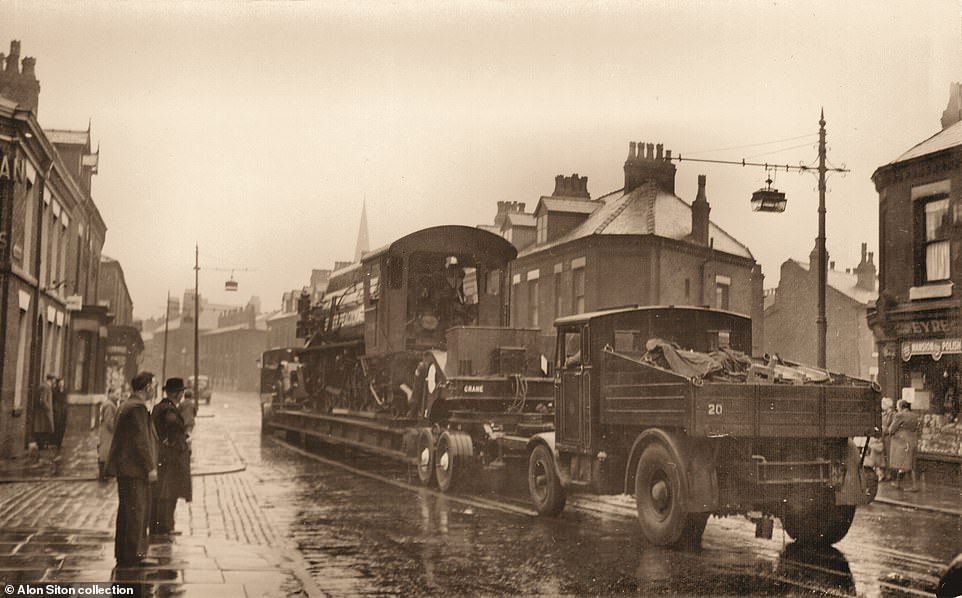 This photograph, taken in 1951, shows a steam locomotive – W Class No.22 Justin Hancock – built by Manchester’s Beyer Peacock at the very beginning of its journey to the other side of the world. It’s being transported to a ship in Birkenhead, with its ultimate destination being Australia’s Silverton Tramway line. The book says: ‘The drab, wet streets of post-war Lancashire could not provide more of a contrast to the antipodean destination’ 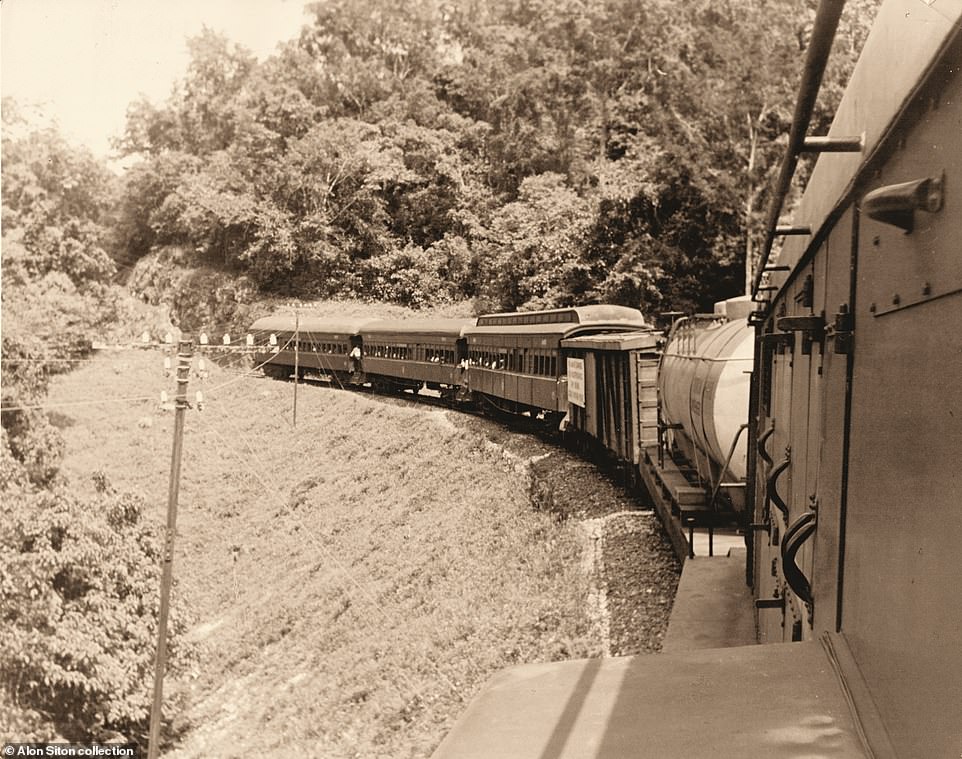 A ‘mixed train’ in 1963 negotiating the mountainous section between Kingston and Montego Bay in Jamaica, photographed from the English Electric diesel engine at the front. The book adds: ‘This was the island’s main line, over 110 miles long and cut through solid rock in places. It connected the two largest cities and visited most of the island’s other major towns en route’ 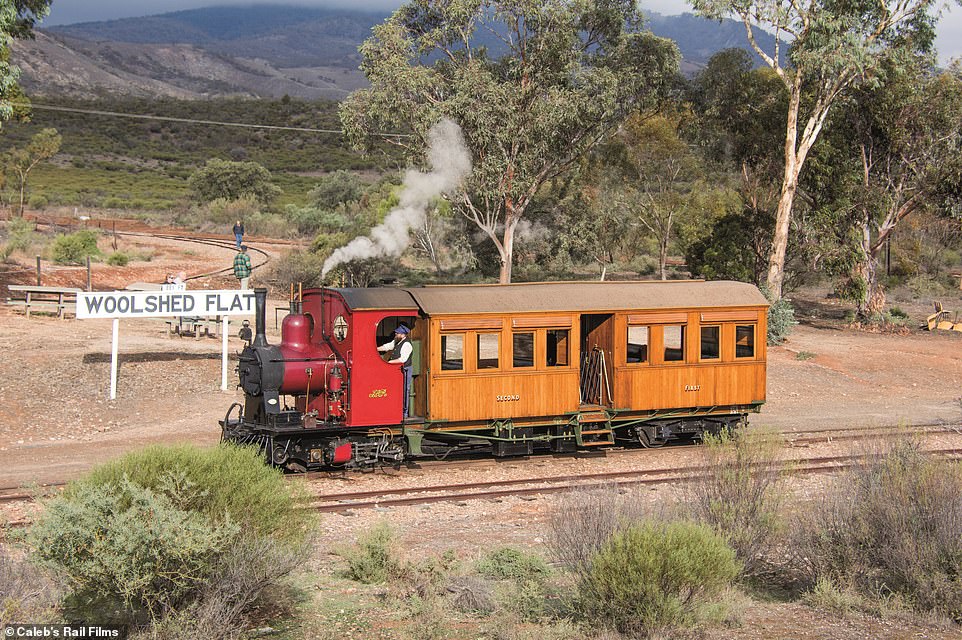 Several British railway companies operated steam ‘railmotors’, consisting of a small locomotive coupled to a passenger coach, the book explains. Above is an example nicknamed the ‘Coffee Pot’, manufactured in 1906 by two British firms for South Australian Railways. The authors reveal that the locomotive section was built by [Leeds-based] Kitson and the coach by Metropolitan of Birmingham, adding that ‘she was restored to working order in 1984 at the Pichi Richi Railway and is the only survivor operating anywhere in the world’ 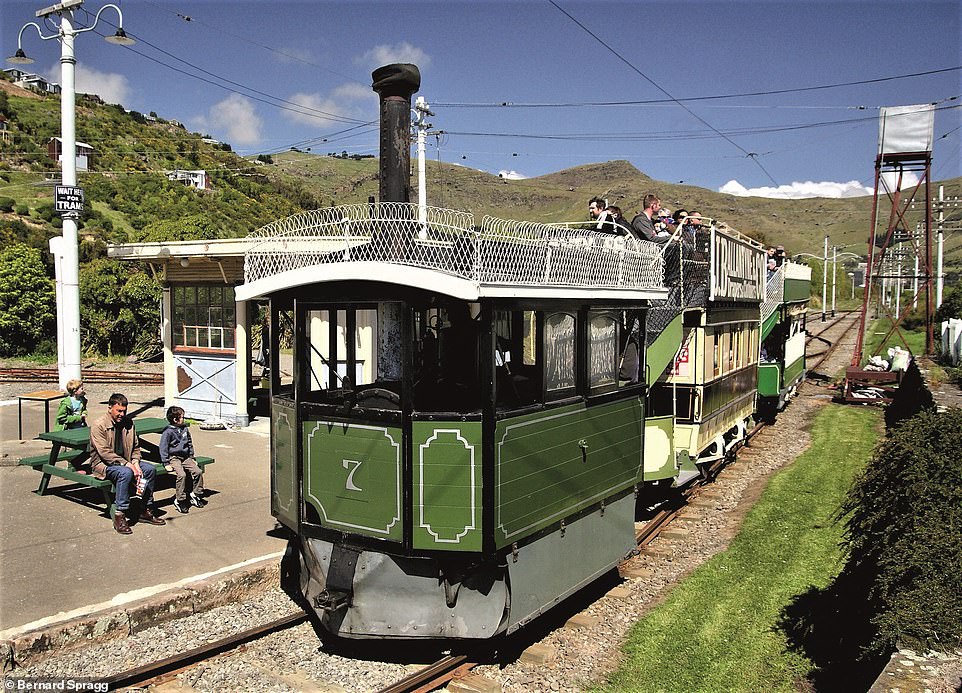 ‘Ferrymead Heritage Park, Christchurch, on New Zealand’s South Island, is home to “Kitty” [above], one of only three Kitson steam tram locomotives in existence,’ the authors reveal, ‘and the only one in operating order.’ The authors add that originally eight were built in Leeds in 1880 and shipped to Christchurch for the Canterbury Tramway Company. They were all superseded by electric trams, we’re told, with Kitty the exception as she was kept in working order for engineering work 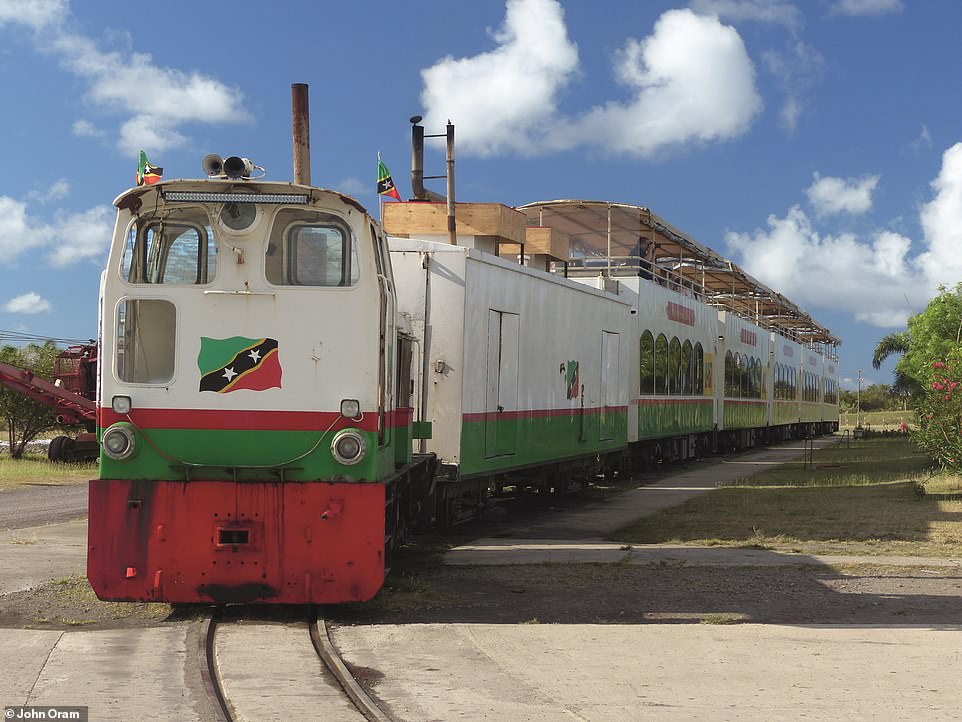 The first railway on the Caribbean island of St Kitts, the authors explain, was a two-foot-six-inch-gauge system for the carrying of sugar cane. After the sugar traffic ceased, part of the railway reopened as a tourist attraction (above) 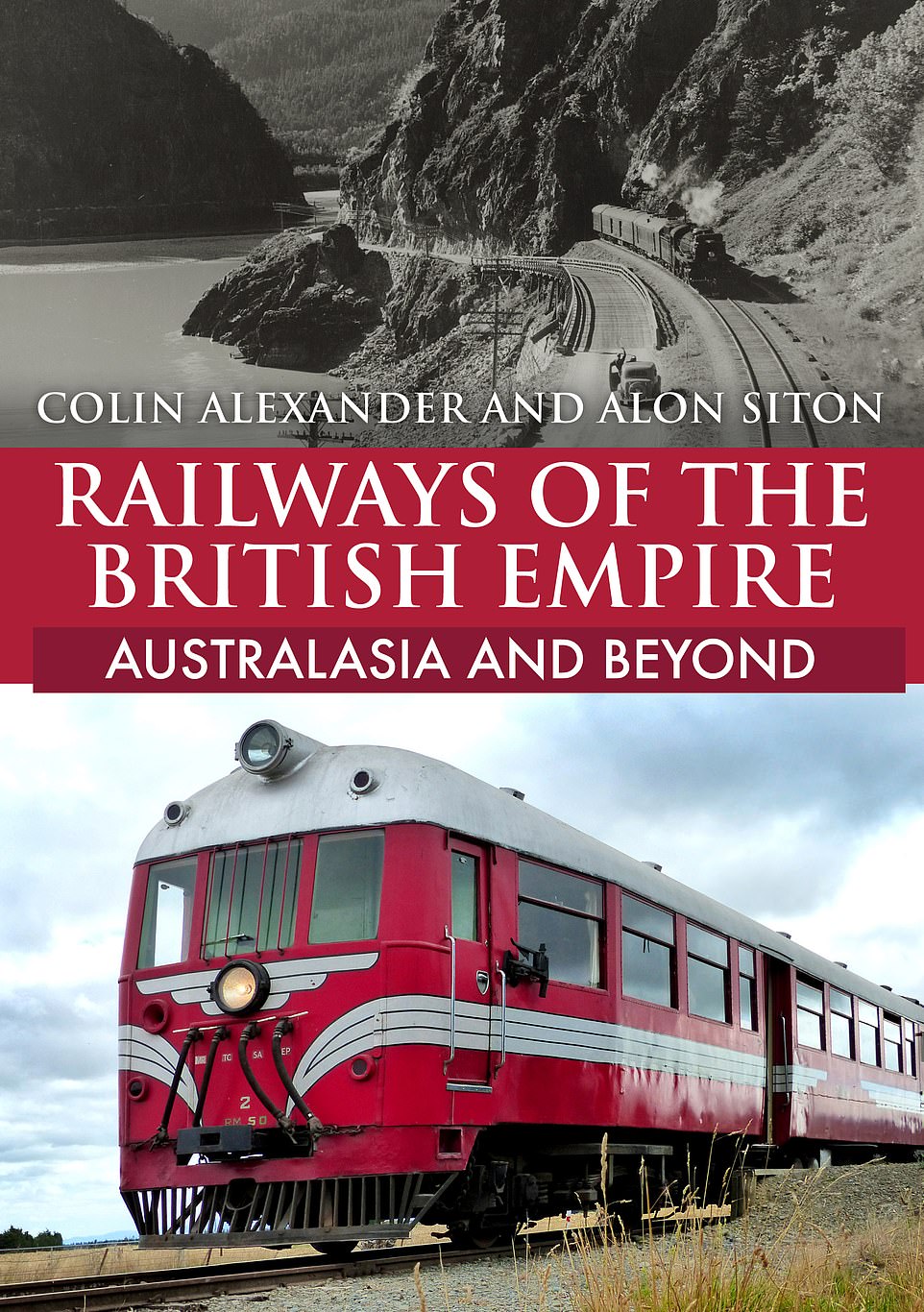 Railways of the British Empire – Australasia and Beyond, by Colin Alexander and Alon Siton (Amberley Publishing) is out now, priced £15.99