There has been a huge backlash in Scotland after the SNP appointed a man as the country’s first ever period dignity officer.

Jason Grant was handed the post for the Tay region of Scotland, with duties including promoting access to free sanitary products following the introduction of the Period Products Act.

But the council has been accused of ‘institutionalised mansplaining’ and ‘peak gender idiocy’ by critics.

Mr Grant – who will also discuss issues around the menopause – said: ‘It’s about making people aware of the availability of period products for anyone of any gender, whenever they need it.

‘I think being a man will help me to break down barriers, reduce stigma and encourage more open discussions. Although affecting women directly, periods are an issue for everyone.

‘We’ll also raise awareness of the menopause, which, although a natural process for women, has wider repercussions in the world of work and family.’

Wimbledon ace Navratilova – who is vocal on social media about transgender athletes and mental health in sport – said: ‘Have we ever tried to explain to men how to shave or how to take care of their prostate or whatever? This is absurd.’

Actress Frances Barber called the appointment ‘weird’, adding: ‘I don’t know how Scottish women feel about this, but as an English lover of Scotland, I’m fuming.’ 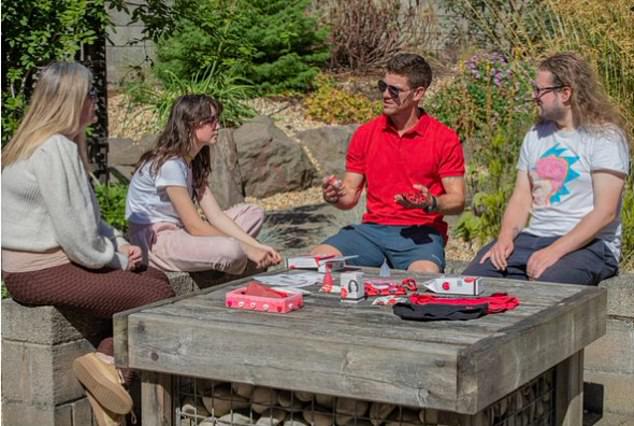 Jason Grant was handed the post for the Tay region of Scotland, with his duties set to include promoting access to free sanitary products

‘When the Welsh [governments] period campaign addressed people who bleed [and] failed to mention women/girls, we thought it = peek gender idiocy,’ she said.

‘But oh no, hold my beer, Scottish gov here to ramp up indignity.’

Author Susan Dalgety added that appointing a man to the position is ‘institutionalised mansplaning.’

‘[I] Wonder if he’s ever experienced the horror of a blood stained dress in public, or the gut-wrenching fear of a missed period? No, didn’t think so,’ she said.

‘It’s about making ‘anyone of any gender’ aware of period products, he says. Jason, I have news for you, only females menstruate. Any more questions? PMS? Endometriosis?

‘I don’t disagree that boys should be taught more about menstruation, but appointing a bloke as the first period dignity officer is institutionalised mansplaining.’

SNP leader Ian Blackford told Sky News that the appointment would have been better suited to a woman.

‘I think it is important that we do have officers in place to ensure that women are supported as much as they should be,’ he said.

‘I think it is important we get the policy right, that we implement it, and that as a principle it would be far better that women are in these posts rather than anyone else.’ 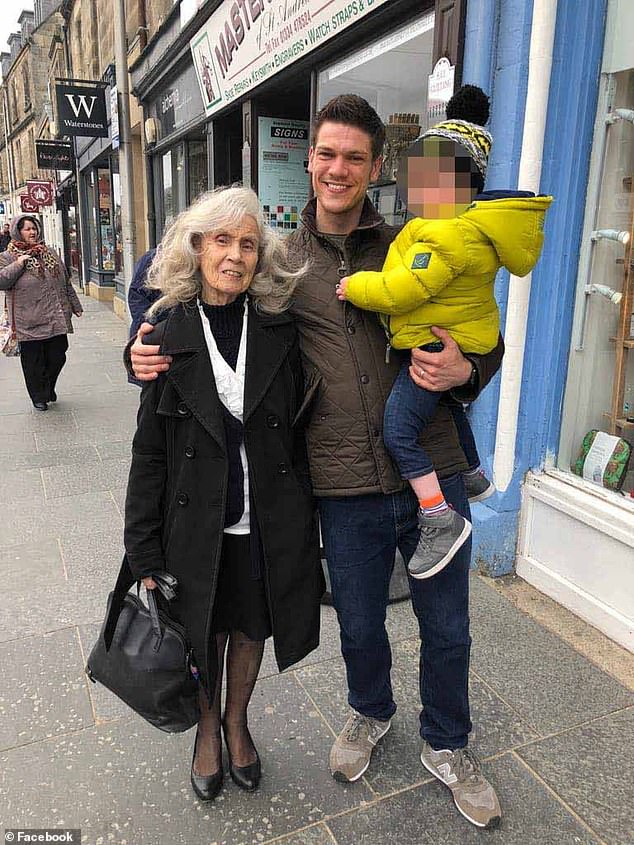 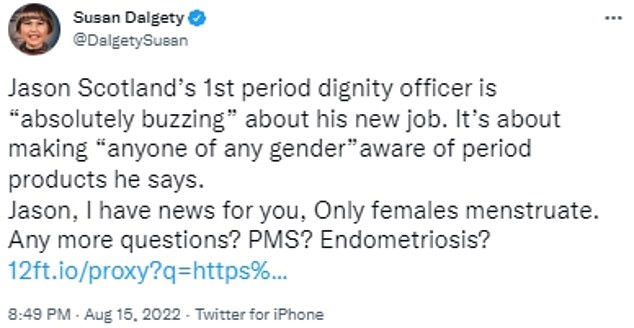 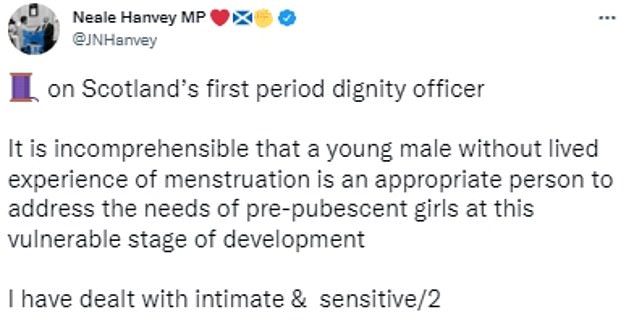 Scottish MP Neale Hanvey added: ‘It is incomprehensible that a young male without lived experience of menstruation is an appropriate person to address the needs of pre-pubescent girls at this vulnerable stage of development.

‘Absolutely reckless decision [and] presents obvious risks for everyone involved Vulnerable young women deserve better than this. What a tragic state of affairs.’

The Act came into force in Scotland on Monday, and puts into law that tampons and sanitary towels must be made available by councils and education providers to anyone who need them.

The Bill was initially brought forward by Labour health spokeswoman Monica Lennon and passed in November 2020, and is intended to eliminate period poverty and help households under financial strain.

It was unanimously approved by MSPs after winning the support of the Scottish Government and the other opposition parties in Holyrood and became law earlier this week.

Mr Grant, a former personal trainer from Dundee, was hired to oversee the promotion of the act. The Scottish Government does not have any involvement in the post.

According to his LinkedIn page, he was also previously a Student Wellbeing Officer at Dundee and Angus College.

But many have expressed outrage at the decision to give the post to a man, with several taking to social media to blast the SNP for the decision.

‘Oh dear God! When is this idiocy going to end? A man as Scotland’s ‘period dignity officer’ will, of course, be comfortable and dignifying for young girls,’ one wrote.

‘Making a man the period dignity officer feels like a bad joke,’ another said. 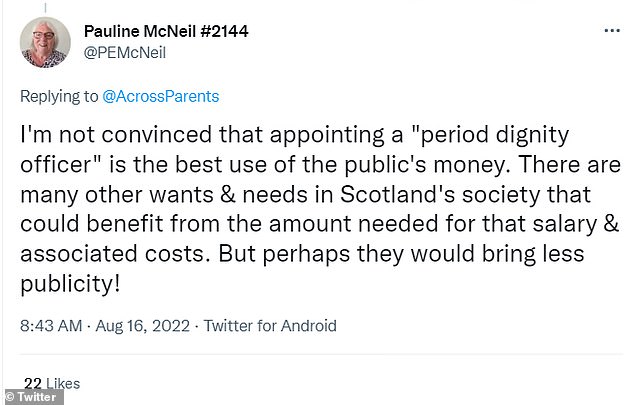 The Period Products Bill: Where to get free sanitary products

Under the new legislation, Scottish councils can decide the precise measurements put in place when it comes to providing free sanitary products.

However, they have a legal obligation to ensure ‘anyone who needs’ them can access a range of the products ‘reasonably easily’.

The products must be made available by councils as well as education providers.

Schools, colleges and universities should make them available in toilets.

People can find their nearest collection point through the PickupMyPeriod mobile app which was launched earlier this year by social enterprise Hey Girls with Scottish Government support.

‘Yet again the SNP deliberately put two fingers up to women and insult them by appointing a MALE Tayside period dignity officer, whatever that is,’ another said.

‘Where is the dignity in constantly insulting women and girls?’

Another said they were ‘absolutely appalled’ over the decision.

‘Because women aren’t capable of managing their own dignity, we have to draft in a man #RethinkTheAppointment,’ they wrote.

Meanwhile, others questioned whether the role was necessary at all.

‘I’m not convinced that appointing a ‘period dignity officer’ is the best use of the public’s money,’ one said.

‘There are many other wants [and] needs in Scotland’s society that could benefit from the amount needed for that salary [and]  associated costs. But perhaps they would bring less publicity!’

‘Sorry why do we even need a period dignity officer?,’ another asked. ‘Wasting more tax payers money to let people know they get free sanitary products’.

‘It’s definitely pioneering as Scotland is the first to do this.

‘It’s about making people aware of the availability of period products for anyone of any gender, whenever they need it.

‘And it’s important whatever we do is done with dignity, so people know that there’s no judgement.’

‘The role builds on some fantastic work which has been gathering speed across the Tay region for several years, led by a passionate group of people of all genders, ages and backgrounds.

‘With all partners in the working group Equal Opportunities Employers, Jason was the strongest candidate.

‘By changing the culture, encouraging debate and removing the stigma around periods, we look forward to supporting the delivery of this important work across the region.’

A spokesperson for for the Scottish Government said: ‘Subject to some statutory requirements, it is for each individual organisation to determine how to meet their duties under the Period Products Act and they have been empowered by the Act to decide through consultation what works best in their area responding to local need and circumstances.

‘Some local authorities are appointing staff to ensure they are complying with their new duties and making free products in line with the Act, ensuring there is information available on where to access the products, and also tackling issues such as the stigma that still surrounds accessing period products.’