Delve into some of the world’s most wonderful woodlands courtesy of this new coffee-table book.

Forests, by Kieron Connolly, published by Amber Books, is a ‘pictorial exploration of an ancient ecosystem that covers four billion hectares of the Earth’s surface and whose maintenance is crucial to human survival’.

The book is packed with more than 220 photographs, taking the reader on a visually spectacular tour of tree-strewn regions across Europe, the Middle East, Africa, the Americas and Asia.

Readers will behold Yemen’s ‘weird and distinctive’ Dragon’s Blood Forest, an underwater kelp forest off the coast of California, and Poland’s ‘Crooked Forest’, a mysterious grove of oddly-shaped pine trees of unknown origin.

Connolly writes in the introduction: ‘Coniferous or broadleaf, tropical or temperate, old growth or new – there are many kinds of forests… We may like to think of forests as untouched, but people have been living in the woods for thousands of years. We have hunted there, logged trees for firewood or for timber. We have cleared land for pastures or to grow crops.

‘The sacred groves in different cultures around the world tell us that we find forests spiritual places, too. We rightly mourn the loss of forests, but, despite immense deforestation, fires and climate change, there are positive cases, from Africa to the Americas to Europe, where trees are reclaiming their space on the planet.’ Scroll down for a peek at 20 of the forested areas detailed in the tome… 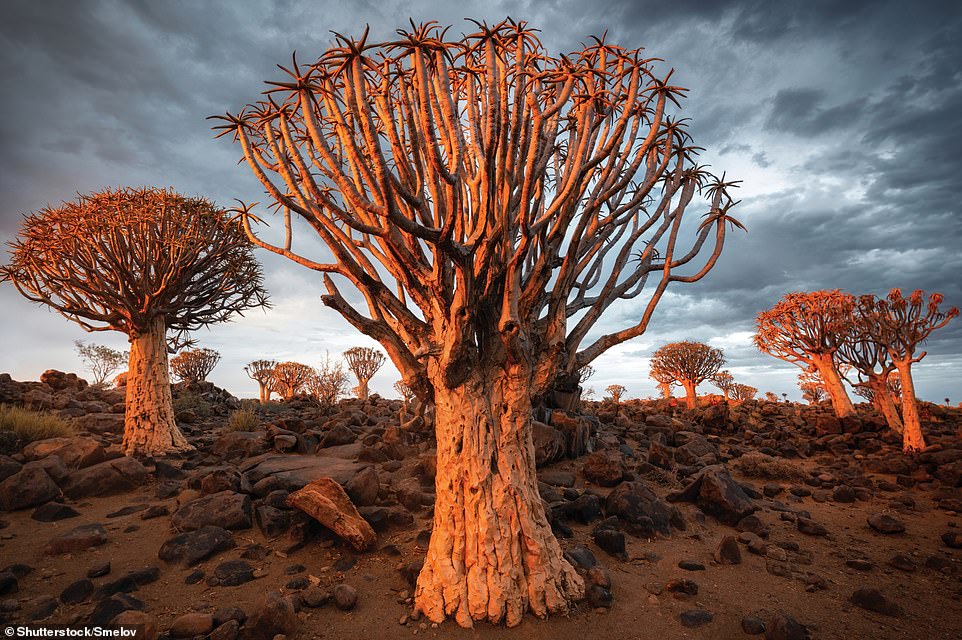 QUIVER TREE FOREST, SOUTHERN NAMIBIA: ‘The San people [the oldest natives of Southern Africa] traditionally used the branches of the quiver tree (Aloidendron dichotomum) to make quivers [a container for holding weapons such as arrows or javelins],’ Connolly says, adding: ‘This forest of about 250 quiver trees is one of the few to have grown spontaneously.’ The author notes that the forest is home to the rock hyrax, a rodent-like mammal that is found ‘across most of sub-Saharan Africa and the Middle East’. He says: ‘Although it is at most 50cm (20in) long and weighs around 4kg (8.8lb), its closest living land relative is the elephant’ 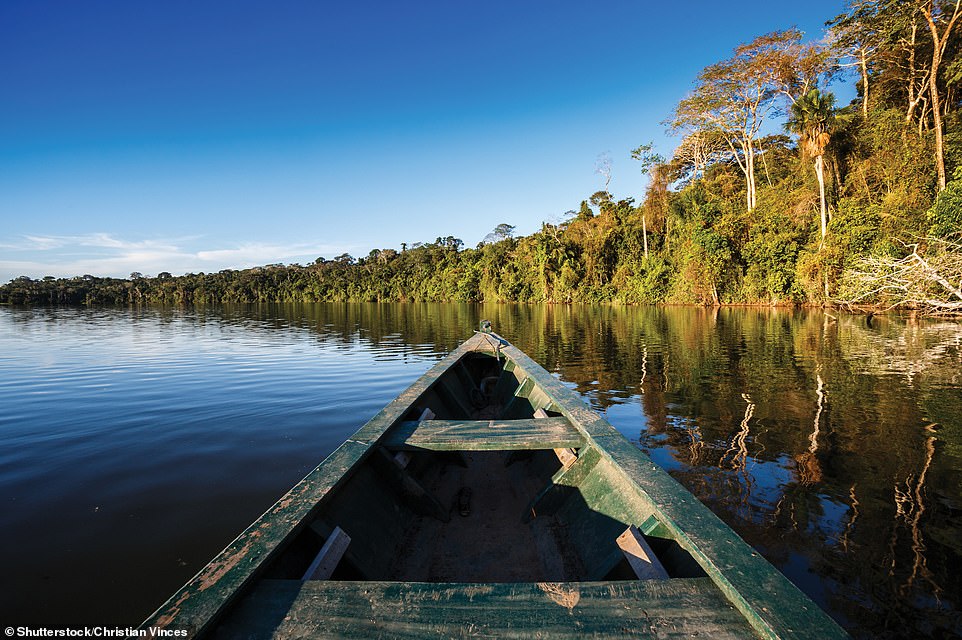 AMAZON RAINFOREST, SOUTH AMERICA: Encompassing 5.5million sq km (2.1million sq miles), the Amazon rainforest contains an estimated 390billion trees from 16,000 species, the book explains. Connolly writes: ‘In surface area, it accounts for half of the world’s remaining rainforests. It ranges over nine countries: Brazil, Peru, Colombia, Bolivia, Ecuador, French Guiana, Guyana, Surinam and Venezuela. More than 30million people across 350 different ethnic groups live in the Amazon.’ The book notes that despite the rainforest’s immense length, ‘there is not a single bridge across the Amazon River’. The author explains: ‘This is not because it is technically impossible but because there are very few roads alongside the river to create sufficient demand. Ferries are used instead’ 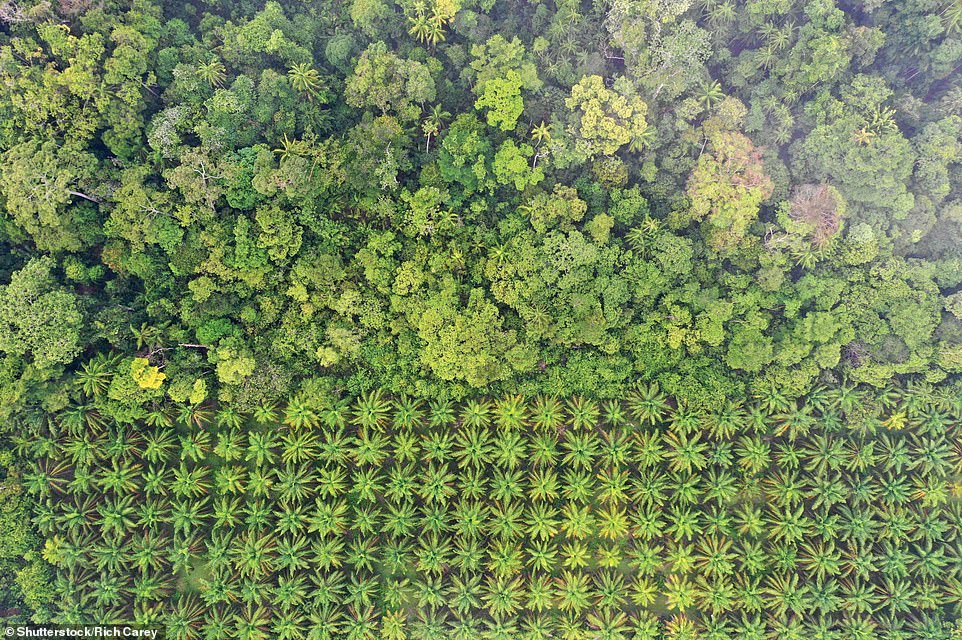 RAINFOREST AND OIL PALM PLANTATION, SARAWAK, MALAYSIAN BORNEO, MALAYSIA: This aerial shot shows a rainforest ‘giving way to an oil palm plantation’, the book reveals. Touching on how the oil palm industry has impacted the region, Connolly says: ‘Oil palm is used as a butter substitute, a foaming agent in soap, and in biofuels. In recent decades, the Malaysian state of Sarawak, which is almost as big as England, has become the world’s biggest supplier of logs used for furniture, panelling and plywood. But as the World Bank reported during the 1990s, Sarawak’s logging was “a sunset industry”. The trees weren’t being replanted and were going to run out. Today, only five per cent of the state’s primary forest remains’ 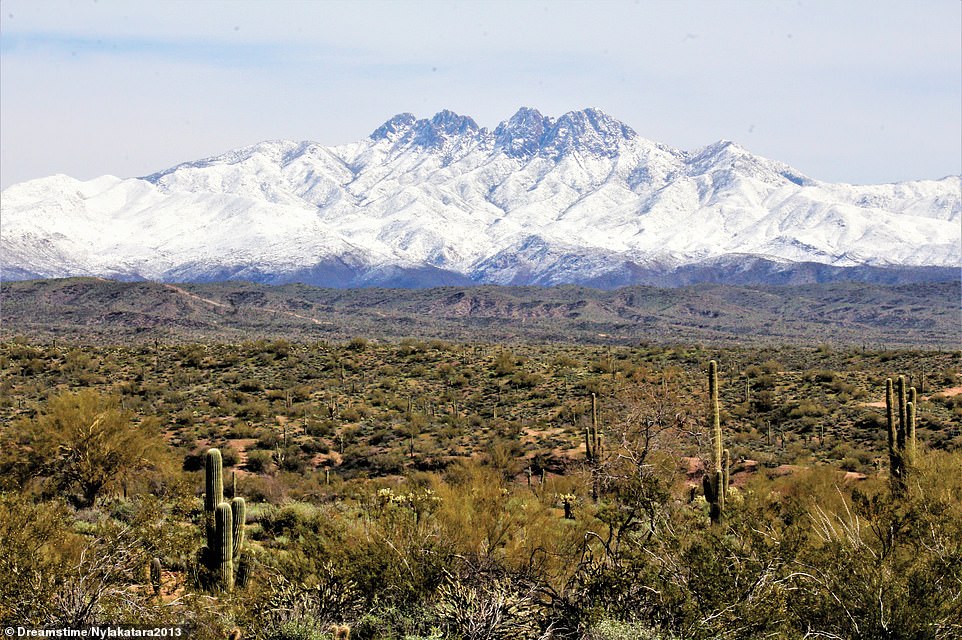 FOUR PEAKS MOUNTAIN, TONTO NATIONAL FOREST, ARIZONA: ‘Brush and pine-covered hillsides lead up to the Four Peaks Mountain, part of the Mazatzal Mountains in south-central Arizona,’ the book says. ‘The vegetation ranges from desert shrub at lower altitudes, up to grasslands with the evergreen manzanita shrub and shrub live oak (Quercus turbinella) at higher levels’ 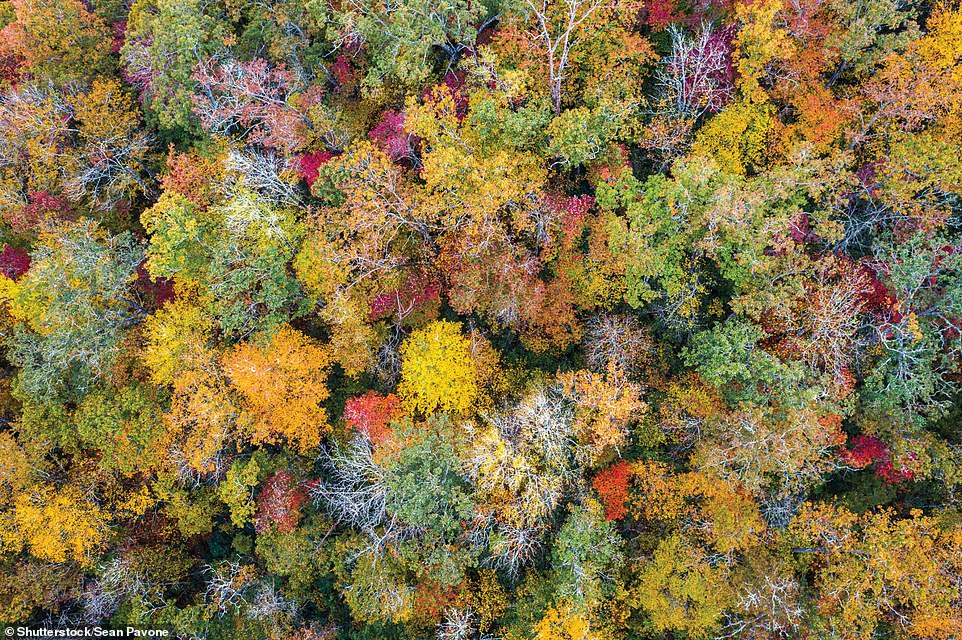 PISGAH NATIONAL FOREST, NORTH CAROLINA, U.S: Established in 1916, Pisgah National Forest was one of the first national forests in the eastern United States, the author reveals. He continues: ‘Located in the Appalachian Mountains, Pisgah – which is the Hebrew word for “mountain summit” – is a hardwood forest with some of the highest peaks east of the Mississippi River’ 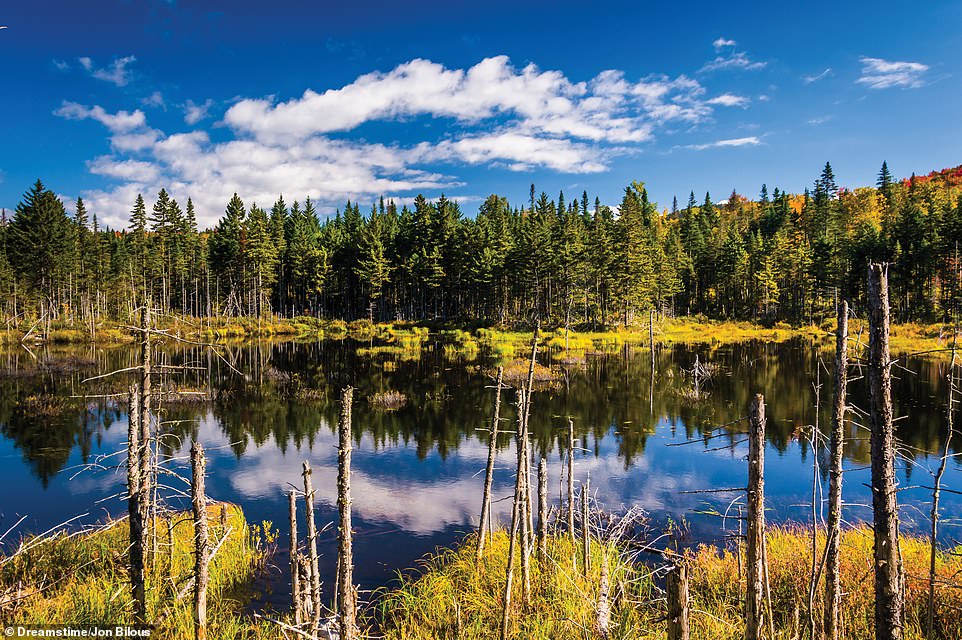 WHITE MOUNTAIN NATIONAL FOREST, NEW HAMPSHIRE, U.S: ‘Part of the northern Appalachians, the White Mountains National Forest was established in 1918 under the Weeks Act, named after Massachusetts’ Congressman John W. Weeks,’ Connolly reveals. He says: ‘Coming into force in 1911, the act was initially conceived because the federal government owned no large tracts of land for conservation in the eastern United States. Through purchases of private land, the act had, within a century, protected 80,000 sq km (49,700 sq miles) of forestland’ 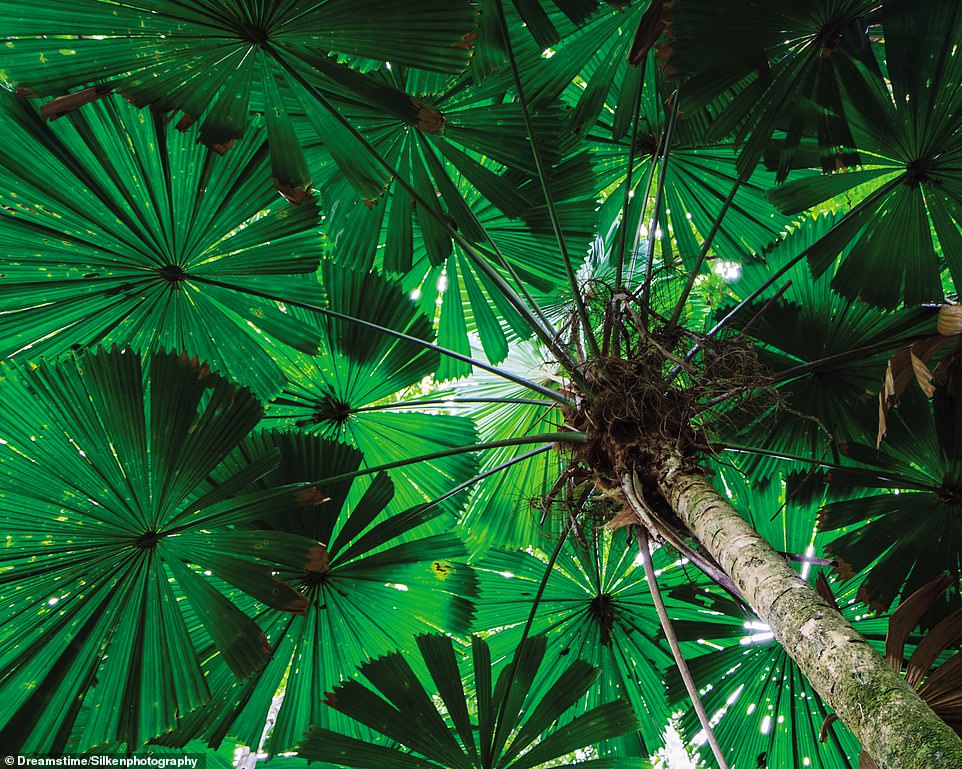 DAINTREE NATIONAL PARK, QUEENSLAND, AUSTRALIA: Describing the plant above, which can be found in the Daintree National Park, Connolly says: ‘The leaves of the Australian fan palm (Licuala ramsayi), which is native to northern Queensland, grow up to 2m (6ft) long and form a near perfect circle.’ He adds that the palm’s fruits ‘are eaten by the southern cassowary bird (Casuarius casuarius)’ and that the ‘tree’s leaves can be used for thatch and food wrapping’ 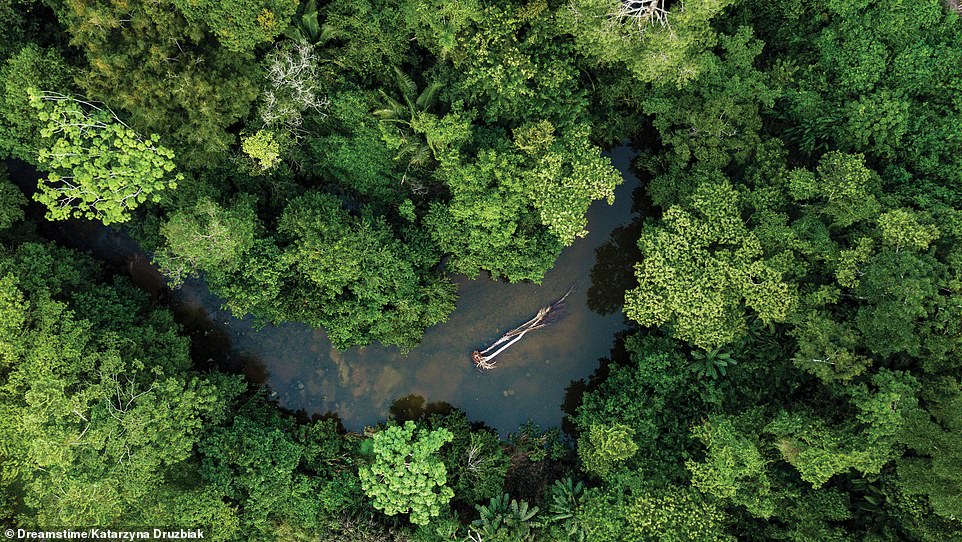 AMAZON RAINFOREST, PERU: ‘In the Peruvian Amazon in the early 17th century, Franciscan missionaries adopted a local Native American fever remedy made from the bark of a tree found in the cloud forests,’ says Connolly. He continues: ‘The bark contained quinine, and for the next 200 years it remained the only known cure around the world for malaria’ 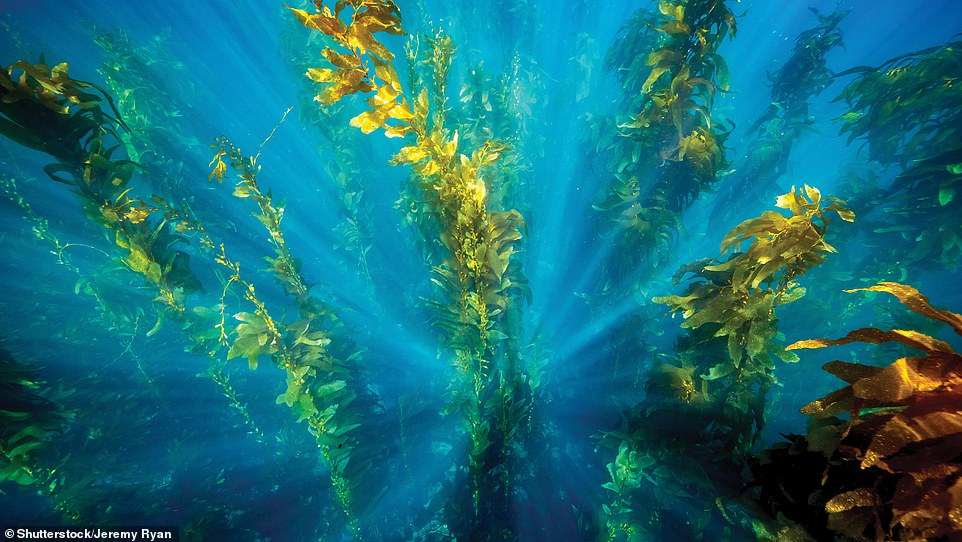 KELP FOREST, CATALINA ISLAND, CALIFORNIA, U.S: The book also delves into underwater forests, with this kelp forest in California highlighted. The author explains: ‘Termed by some scientists “the sequoias of the seas”, kelp (brown algae seaweeds) absorb carbon dioxide – thereby reducing the acidification of the oceans – and release oxygen into the water’ 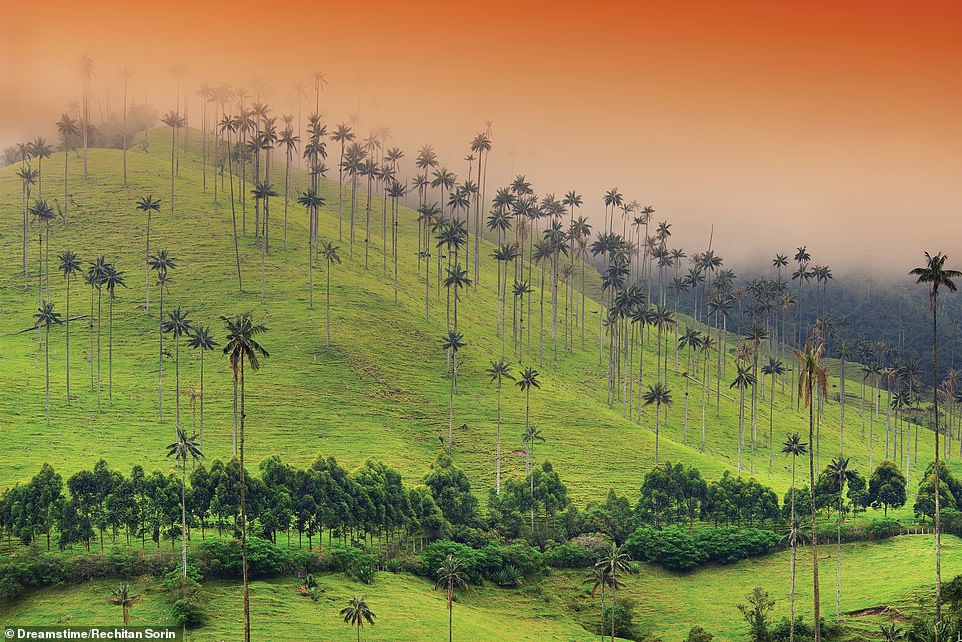 QUINDIO WAX PALMS, COCORA VALLEY, QUINDIO, COLOMBIA: According to the book, a religious tradition led to the decline of Quindio palms in Colombia. Connolly writes: ‘Around the Christian world on the Sunday before Easter, churches hand out palms to their congregations, commemorating the day when Jesus’s followers honoured his final entry into Jerusalem by laying palms in his path. But in Colombia, this practice, along with habitat loss and disease, led to Quindio palms (Ceroxylon quindiuense) becoming a threatened species as too many people tore palms off young trees. In 1985, the country gave the Quindio – its national tree – protected status.’ He continues: ‘It is the tallest palm in the world, usually reaching up to 148ft (45m), and only grows in the montane forests of Colombia and Peru’ 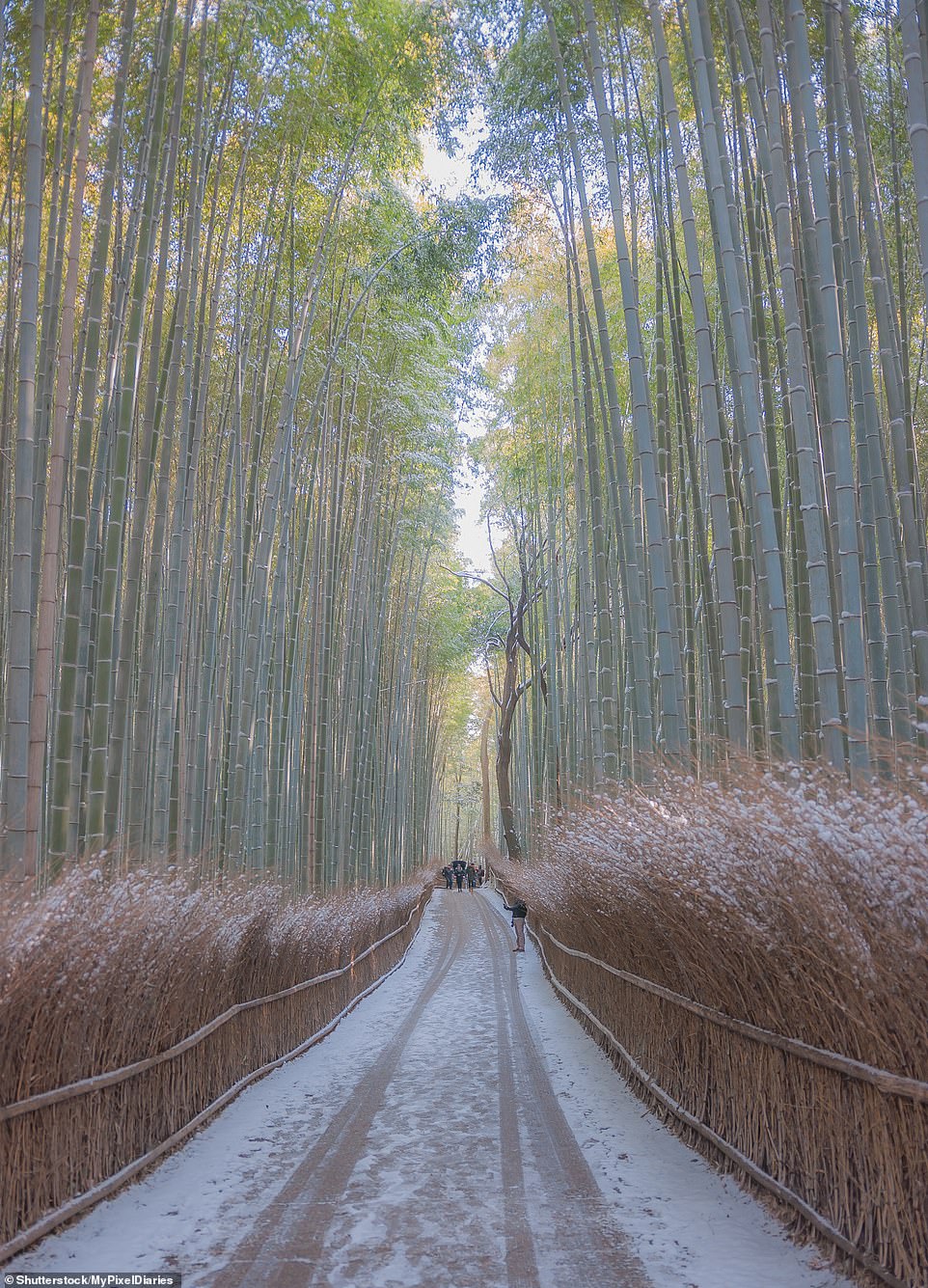 ARASHIYAMA FOREST, KYOTO PREFECTURE, JAPAN: Transporting you to the outskirts of Kyoto city, the book reads: ‘The whistling of the wind through the trees, the tapping of the trunks as they knock together, the creak of the bending wood and the rustling of the bamboo branch leaves earned the Arashiyama Forest a place on the Japanese government’s “100 Soundscapes” initiative to motivate people to leave their homes and enjoy some fresh air.’ Connolly says ‘when the pathways aren’t too busy’, the ‘denseness of the swaying trees and sound’ can make Arashiyama – which is also known as the Sagano Bamboo Forest – a ‘meditative place’. He adds that Arashiyama ‘covers 16 sq km (six sq miles) of largely Moso bamboo (Phyllostachys edulis)’. The book explains: ‘The species is native to China and Taiwan and can reach up to 28m (92ft) tall. It is the species most commonly used in the bamboo textile industry, such as in the production of rayon’ 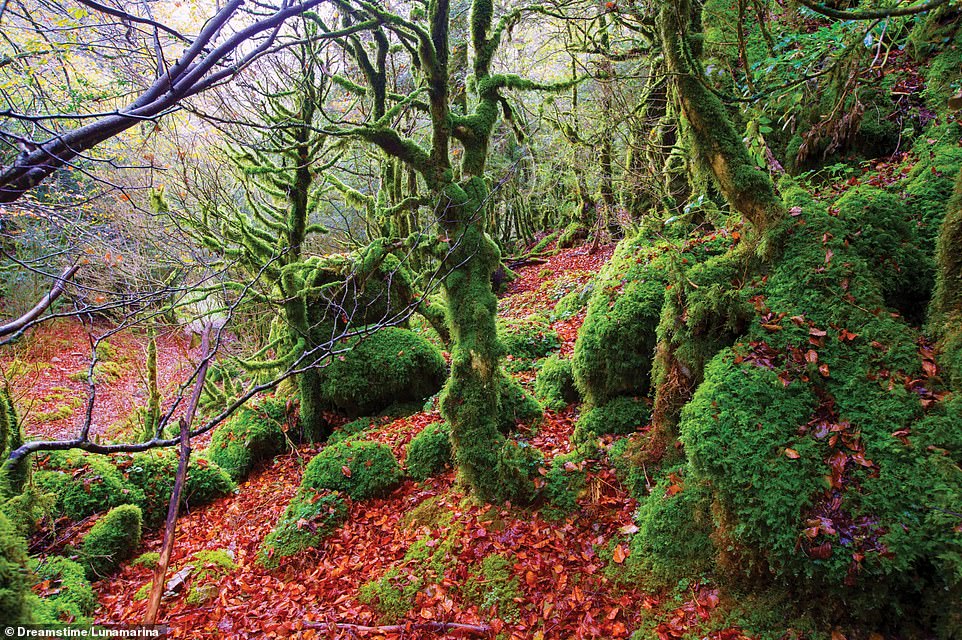 IRATI FOREST, NAVARRE, SPAIN: ‘Covering 17,300 hectares (42,800 acres), Irati is a large beech and fir forest in the western Pyrenees,’ the book explains. It adds: ‘Relatively isolated, Irati’s environments range from forests to wetlands, and from subalpine meadows to Atlantic heaths’ 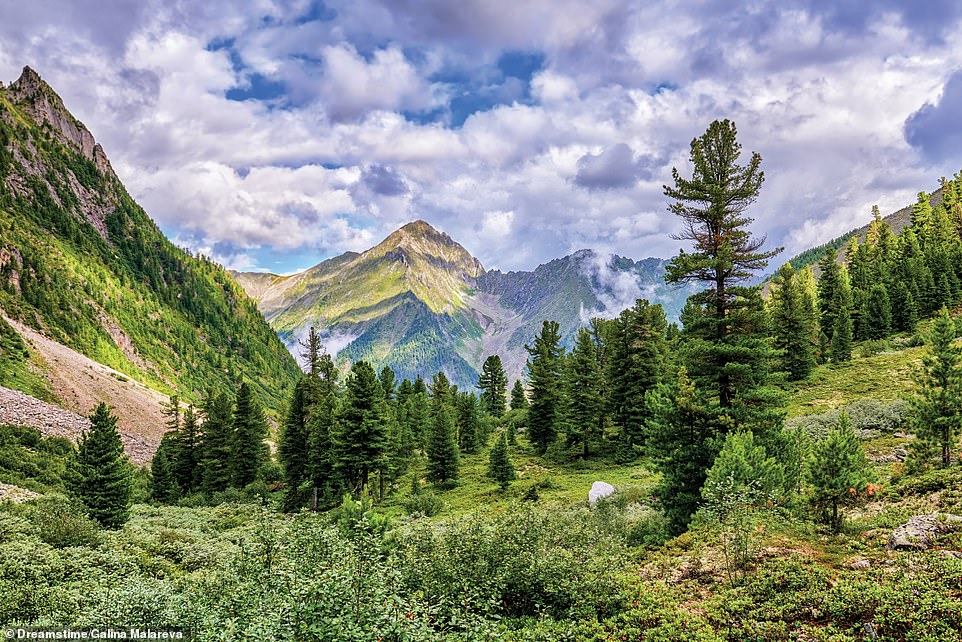 EAST SAYAN, BURYATIA, SIBERIA, RUSSIA: Connolly says: ‘A mountain range in the remote republic of Buryatia in southern Siberia, the Sayan once served as a border between Russia and Mongolia.’ Its trees include Siberian pines (Pinus sibirica), which are pictured. ‘The Russian far north contains a quarter of the world’s trees,’ the author adds 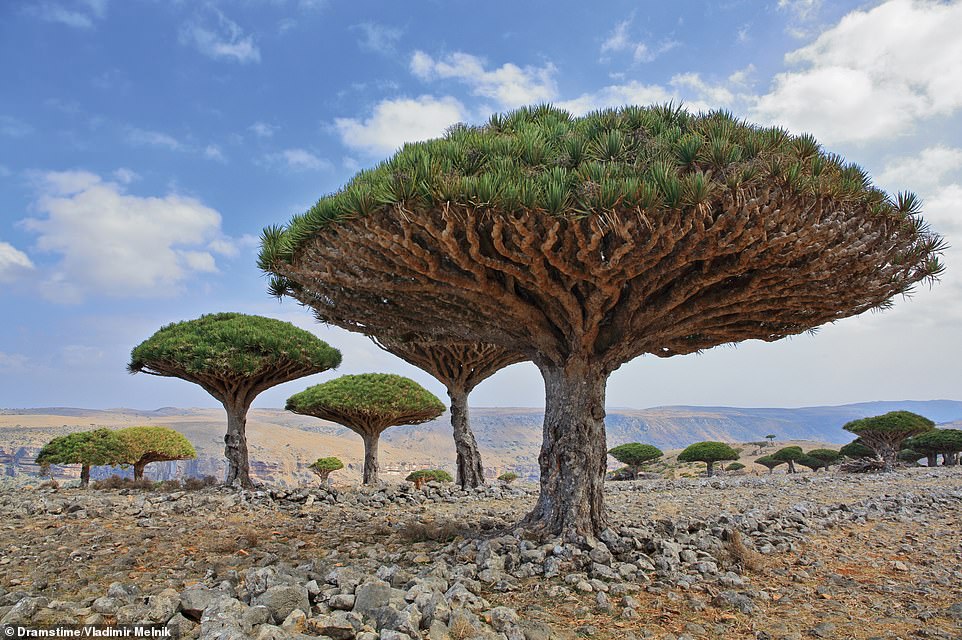 DRAGON’S BLOOD FOREST, SOCOTRA, YEMEN: Connolly says of the dragon’s blood trees on the remote island of Socotra: ‘The tree’s unusual shape is an adaptation to the arid climate and rocky terrain. The umbrella-like covering captures moisture, provides shade and reduces evaporation, allowing seeds to grow beneath adult trees. Classified as vulnerable, the species is suffering from overgrazing by goats, the impact of severe cyclones, and the gradual drying out of the archipelago.’ The book notes that ‘smaller quantities of the dragon’s blood tree’s berries are fed to goats’ and for centuries ‘the tree’s red resin has been used as a dye’ 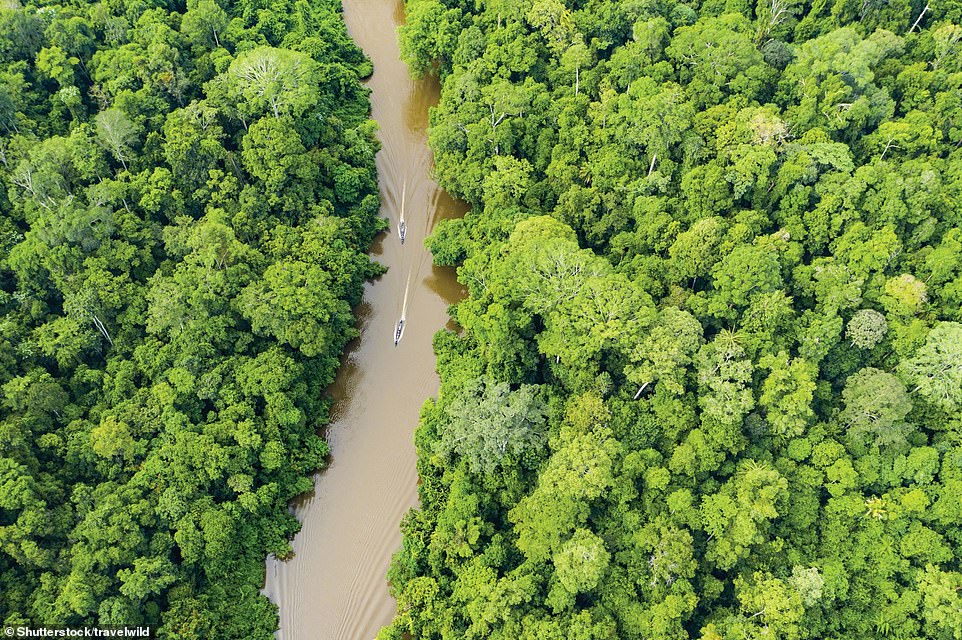 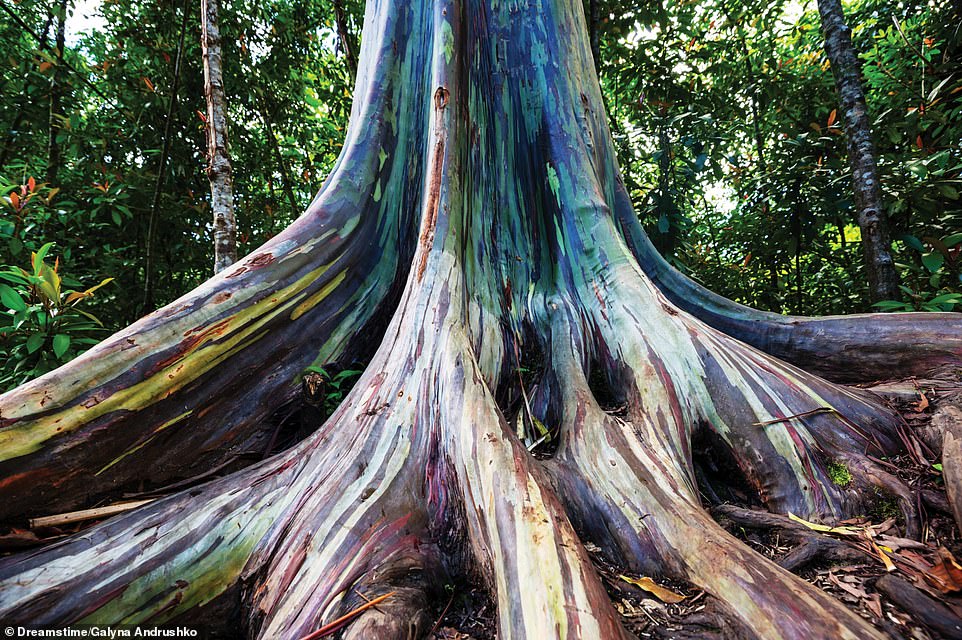 RAINBOW EUCALYPTUS, MAUI, HAWAII, U.S: The rainbow eucalyptus, Connolly says, is the only eucalyptus species to grow in rainforests and it is native to Indonesia, the Philippines and New Guinea. He notes: ‘It is also grown in plantations for pulpwood used in making paper’ 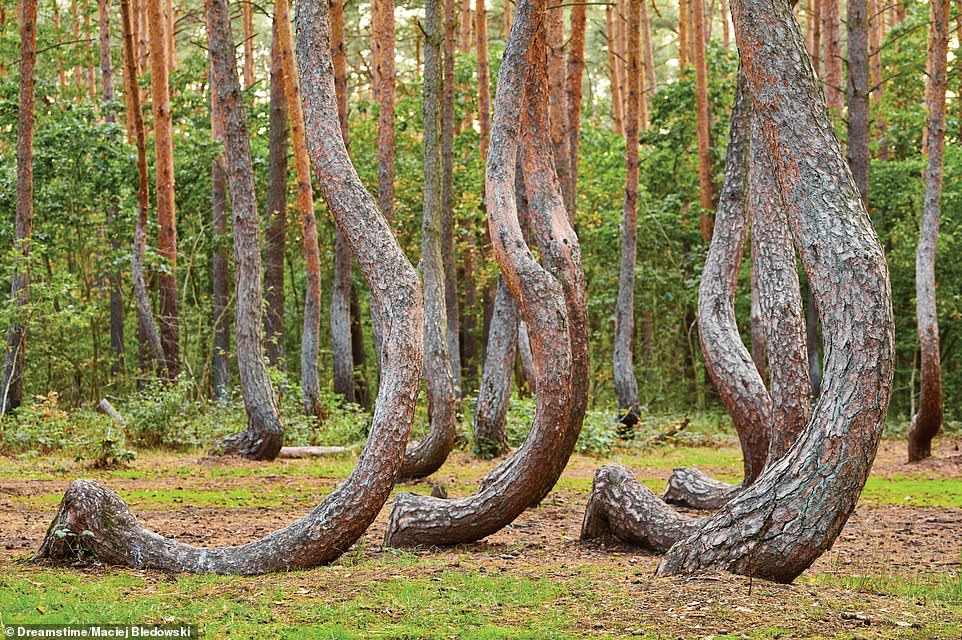 CROOKED FOREST, WEST POMERANIA, POLAND: Touching on the unusual shape of these trees in Poland, Connolly says: ‘It is not known why the 400 pine trees in this grove bend in such a curious way. The forest was planted in around 1930 and it has been suggested that the trees were manipulated, perhaps because the wood would later be used in furniture or boatbuilding. But the mystery remains’ 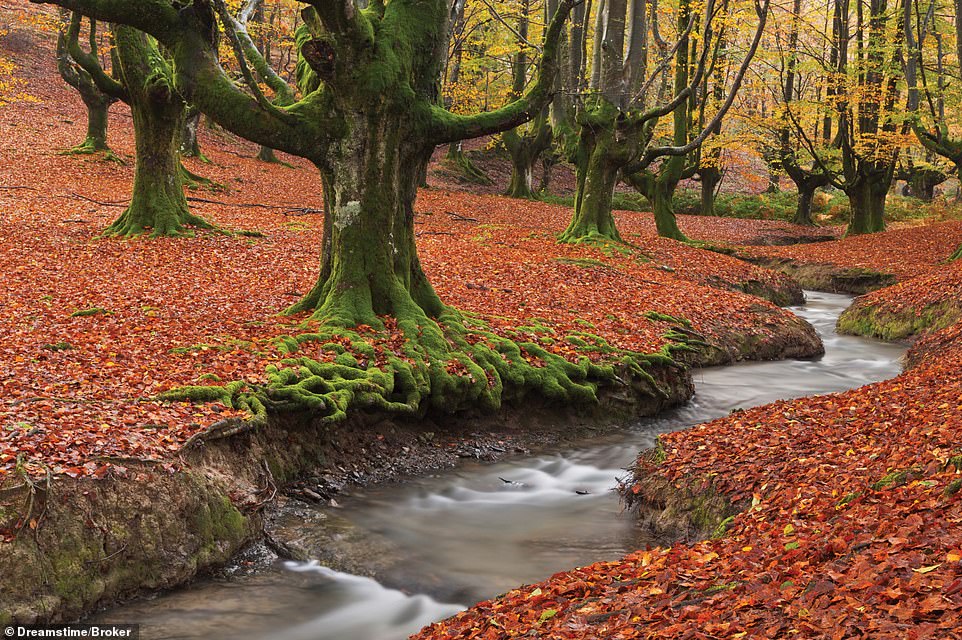 OTZARRETA, PARQUE NATURAL DE GORBEIA, BASQUE COUNTRY, SPAIN: ‘Unusually, the branches of the 100 beech trees at Otzarreta grow up rather than out,’ the author writes. Explaining why this phenomenon occurs, he continues: ‘When they were about 50 years old, the trunks of these trees were cut at about three metres (10ft) by woodsman for charcoal production. The branches that grew back rose vertically’ 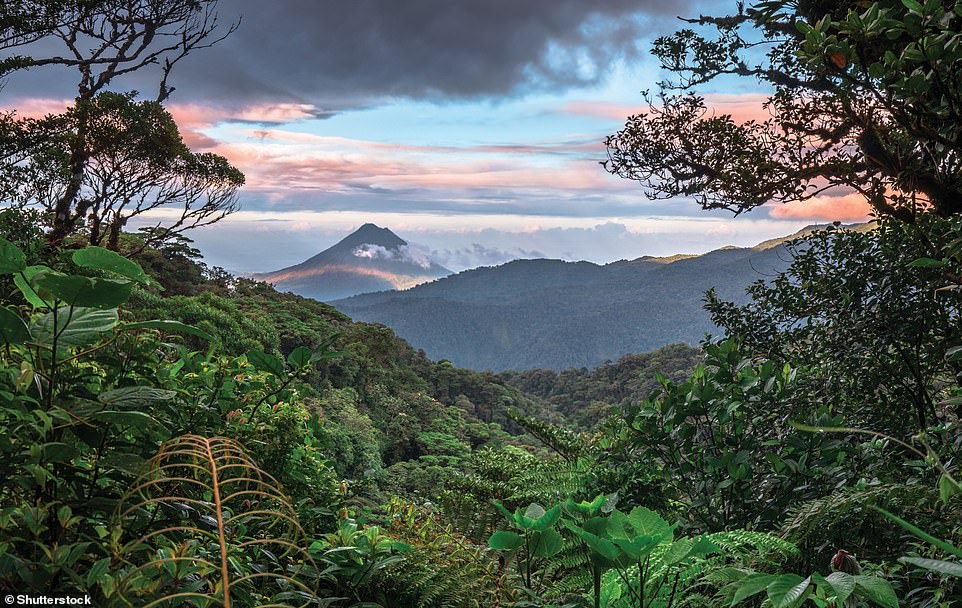 MONTEVERDE CLOUD FOREST RESERVE, PUNTARENAS AND ALAJUELA, COSTA RICA: Connolly writes: ‘What links this cloud forest, the Korean War and Quakers from the United States? In the early 1950s, a group of conscientious objectors, led by Quakers from Alabama, bought land in Costa Rica to avoid being drafted for service in the Korean War. They named the area they settled in Monteverde and worked in dairy and cheese production. Twenty years later, they began efforts to protect the land from further development and established the cloud forest reserve.’ The author notes that Costa Rica’s Arenal volcano [pictured in the background] was ‘dormant for hundreds of years before erupting in 1968 and destroying a small town’. He says: ‘Further occasional eruptions happened over the next 40 years, but since 2010 the volcano has been dormant.’ The book explains that tree cover in Costa Rica declined from 75 per cent in 1940 to 20 per cent in the late 1980s. It reads: ‘Much of the land was deforested for logging and cattle farming. In the early 1990s, financial incentives were given to farmers to replant forests or allow them to grow back naturally. Managed ecotourism replaced some of the income from cattle farming. By 2021, more than half of the country was once again covered in forested land.’ The compendium adds that more than 70,000 tourists visit Monteverde each year 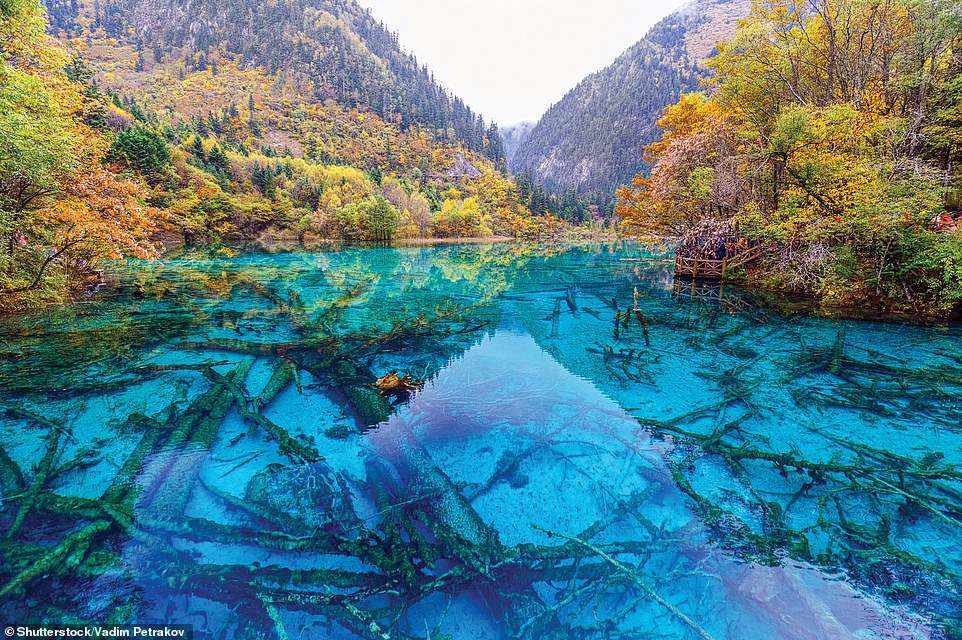 JIUZHAIGOU VALLEY, SICHUAN, CHINA: ‘Situated in the Min Mountains on the edge of the Tibetan Plateau in southwestern China, the Jiuzhaigou Nature Reserve is known for its 100 clearwater lakes, where mineral deposits colour the water blue, green or turquoise,’ the book reveals. Connolly adds that the ‘jagged mountains are forested with a mix of broadleaf and coniferous trees’ 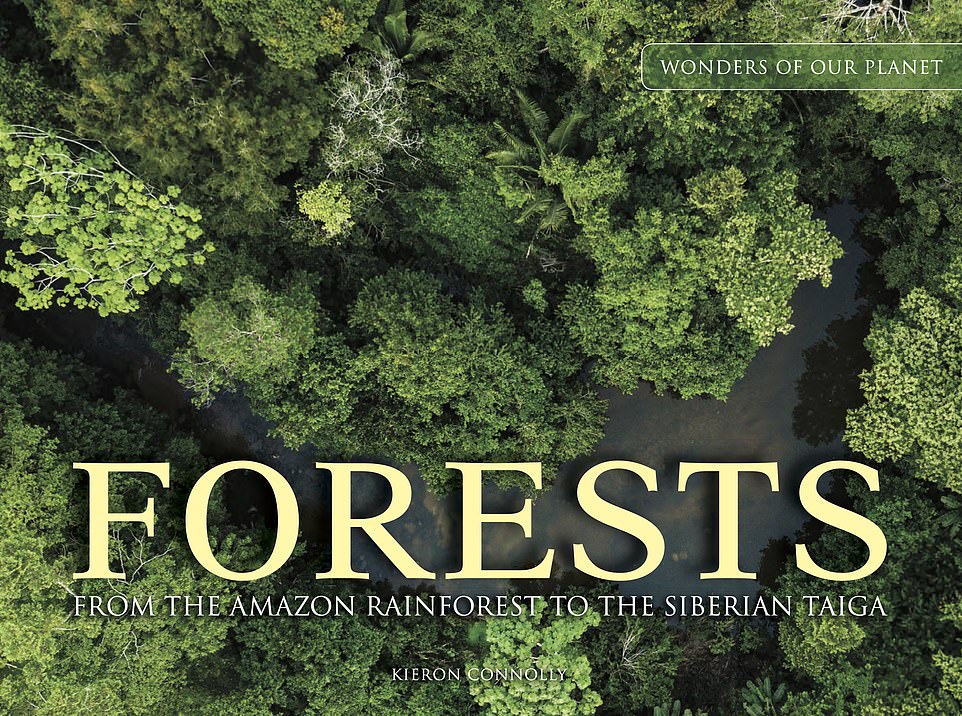