The idea of travelling from Miami to London in just five hours might sound too good to be true for many weary travellers.

But it could become a reality in just seven years, following the news that American Airlines has agreed to buy 20 Overture jets from aircraft maker Boom Supersonic.

The Overture, dubbed the ‘Son of Concorde’ is still under development, but is tipped to be the ‘world’s fastest airliner’, reaching speeds of Mach 1.7 (about 1,300mph).

This is double the speed of current commercial jets, and could slash the journey time between Miami and London from nine hours to just five.

‘Overture is our flagship aircraft, a supersonic commercial airplane that will carry up to 88 passengers,’ Boom Supersonic explains on its website. ‘We are designing Overture to industry-leading standards of speed, safety, and sustainability.’ 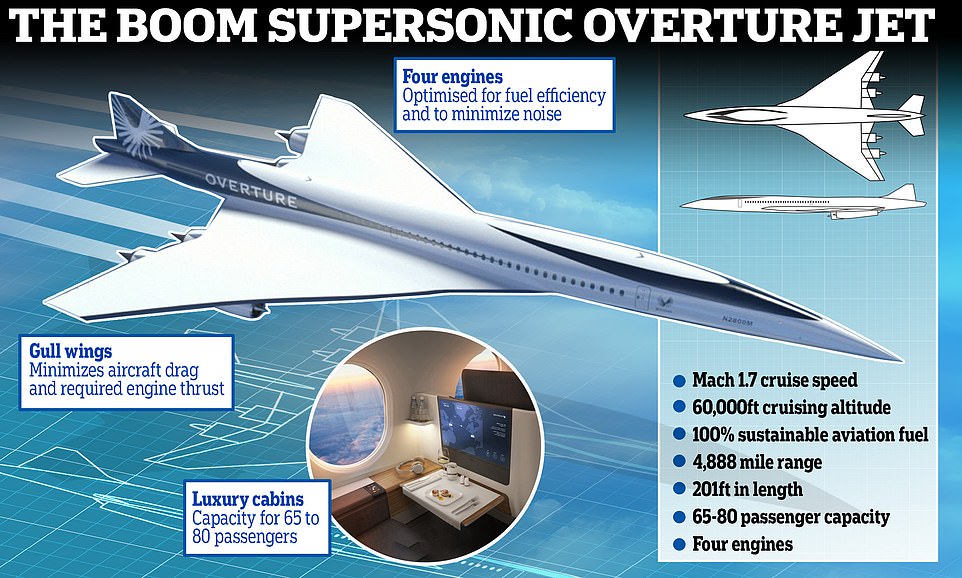 The Overture is still under development, but is tipped to be the ‘world’s fatest airliner’, reaching speeds of Mach 1.7 (about 1,300mph). Overture is slated to roll out in 2025, fly in 2026 and expected to carry passengers by 2029 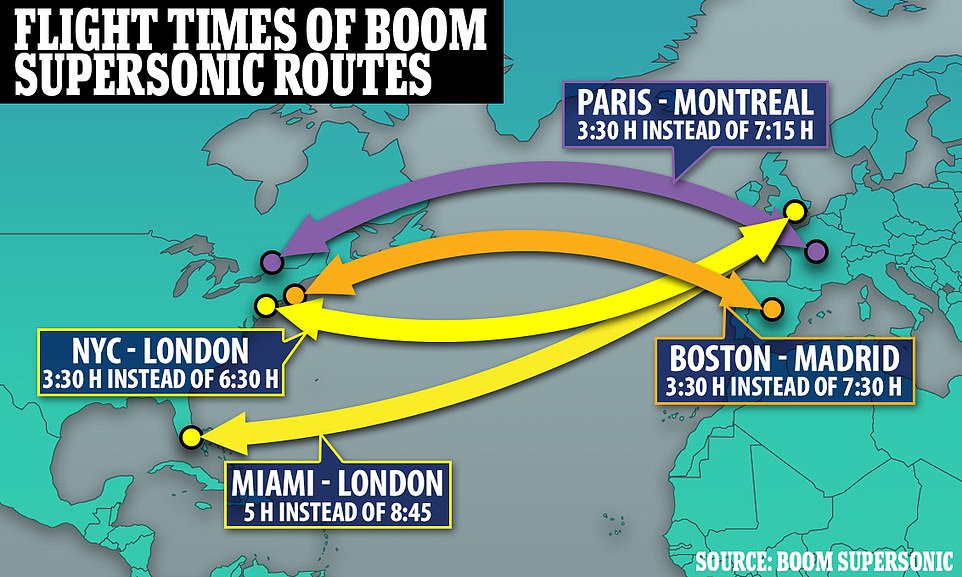 Still under development, the Overture is expected to reach speeds of Mach 1.7, or about 1,300 mph, roughly double the top speed of the fastest current commercial jets on the market, including the Boeing 747

Overture is driven by four powerful wing-mounted engines that power the plane to cruising speeds of Mach 1.7 (1,300mph) over water, and just under Mach 1 (767mph) over land without the use of afterburners.

‘The use of four engines keeps weight and temperature balanced, and shrinks the size requirements of each engine, which ​​allows the production of those engines to fall within current supply chain and manufacturing capabilities,’ Boom Supersonic explained.

Each engine is fed by a highly-efficient, streamline-traced, axisymmetric inlet.

These inlets provide ‘exceptional’ pressure consistency that allows the engines to operate with subsonic airflow at supersonic speed, according to Boom Supersonic.

‘Engine placement was selected to conform to the strictest passenger safety requirements,’ it added.

While you might expect Overture to be incredibly loud, thankfully this isn’t the case.

Using four engines results in lower thrust requirements for each, which means reduced overall noise levels, according to Boom Supersonic.

The plane is also fitted with the world’s first automated noise reduction system.

‘With no afterburners and buzz-free engines, Overture’s takeoffs will blend in with existing long-haul fleets, resulting in a quieter experience for both passengers and airport communities, meeting or exceeding ICAO (International Civil Aviation Organization) requirements for all subsonic aircraft operating over land and at or near airports,’ Boom Supersonic explained. 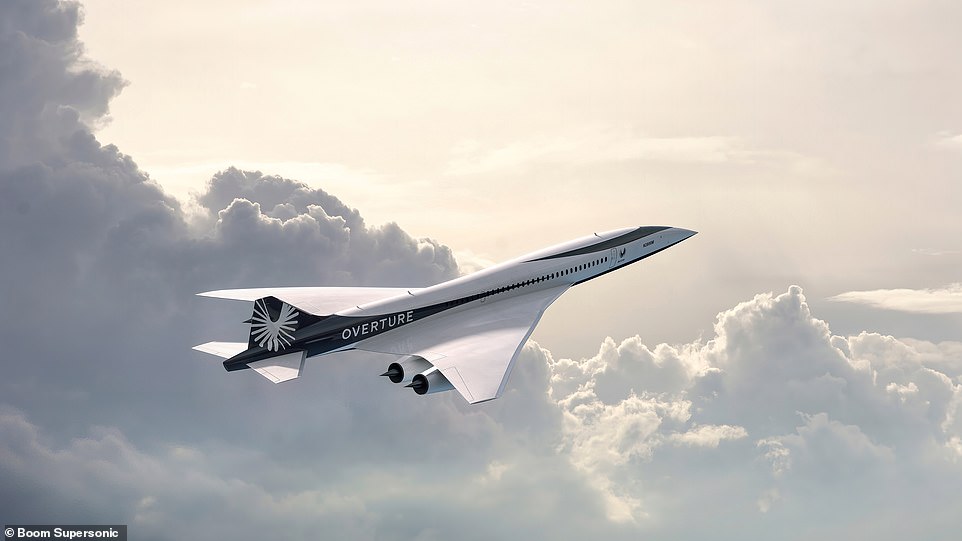 Still under development, the Overture is expected to reach speeds of Mach 1.7, or about 1,300 mph, roughly double the top speed of the fastest current commercial jets on the market, including the Boeing 747 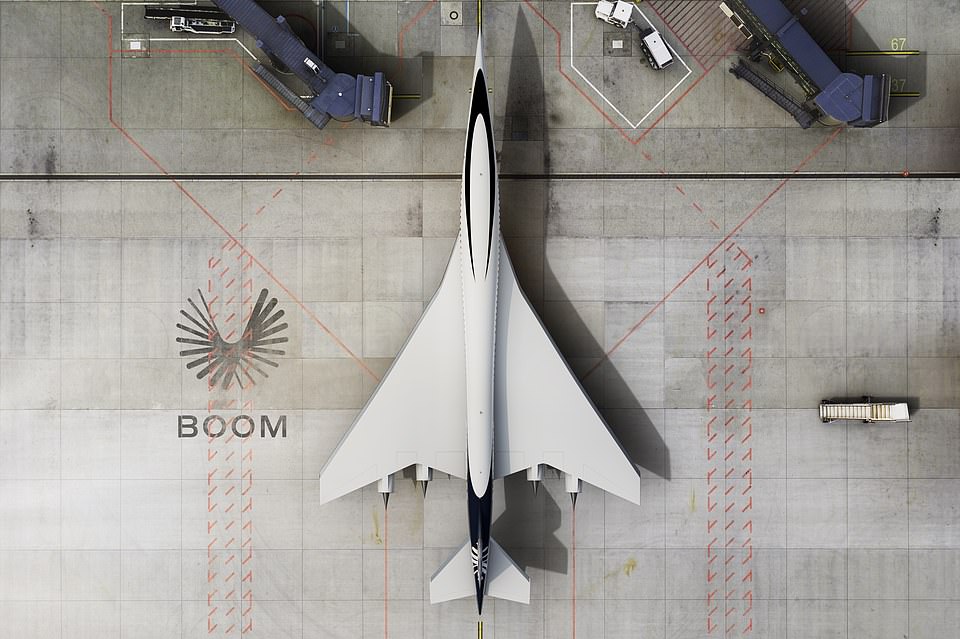 Boom says that Overture, which will be able to fly at 60,000ft and carry between 65 and 80 passengers, will use ‘the world’s first automated noise reduction system’

What is sustainable aviation fuel (SAF)?

SAF is a biofuel used to power aircraft that has similar properties to conventional jet fuel but with a smaller carbon footprint.

Depending on the feedstock and technologies used to produce it, SAF can reduce greenhouse gas emissions dramatically compared to conventional jet fuel.

Feedstocks for producing SAFs include:

Overture is designed to minimise drag and maximise fuel efficiency at supersonic speeds.

Overture features gull wings, which allow air to flow smoothly over and around the aircraft.

‘Particular to Overture, this wing is a derivative of the traditional delta wing found on most supersonic aircraft,’ (including Concorde), Boom Supersonic explained.

‘The delta platform is optimised for supersonic flight but does not operate optimally in lower-speed / subsonic conditions.

‘The complex gull-wing design was selected to optimise cruise and low-speed conditions.’

The plane is built from a lighter carbon composite material, which makes it more fuel efficient, and thus more sustainable.

While many existing planes use aluminium as a key building material, Boom Supersonic says that carbon composite structures are a better option.

‘The carbon-fibre composites maintain strength at elevated temperatures better than aluminium,’ it explained.

‘The composites expand and contract much less than metal under supersonic conditions, allowing Overture to fly at higher speeds more safely.’ 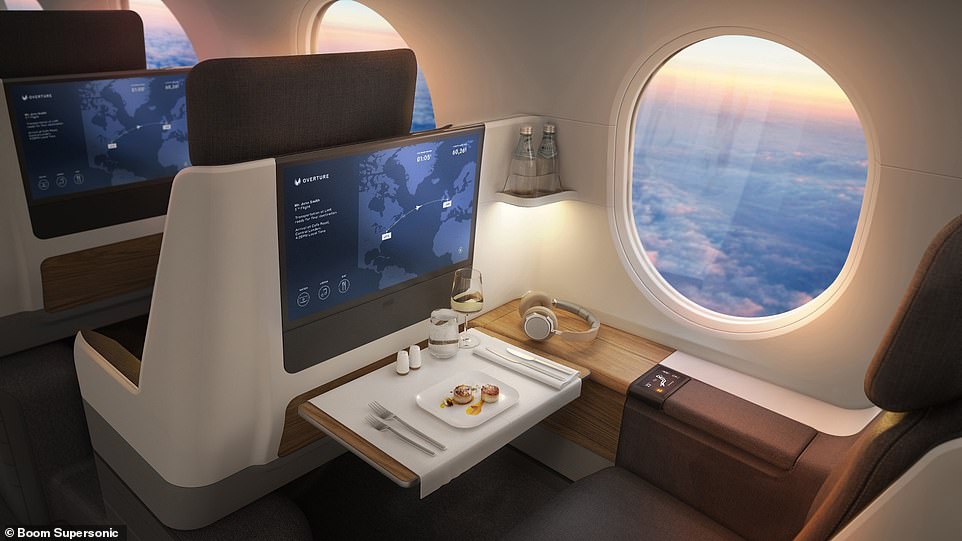 ‘Overture is our flagship aircraft, a supersonic commercial airplane that will carry up to 88 passengers,’ Boom Supersonic explains on its website. ‘We are designing Overture to industry-leading standards of speed, safety, and sustainability’ 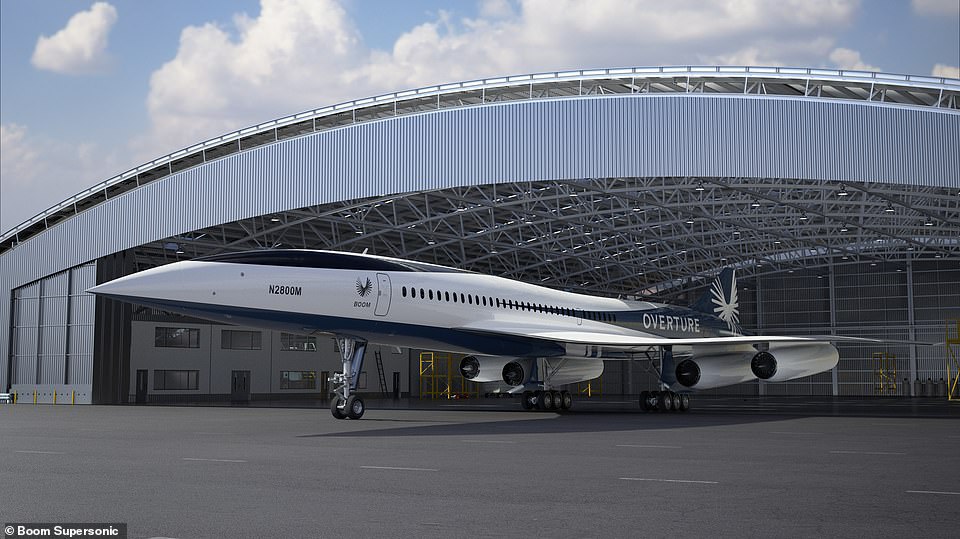 Overture will be powered by four powerful, wing-mounted engines that enable the airliner to cruise at Mach 1.7 (1,300mph) over water and just under Mach 1 (770mph) over land 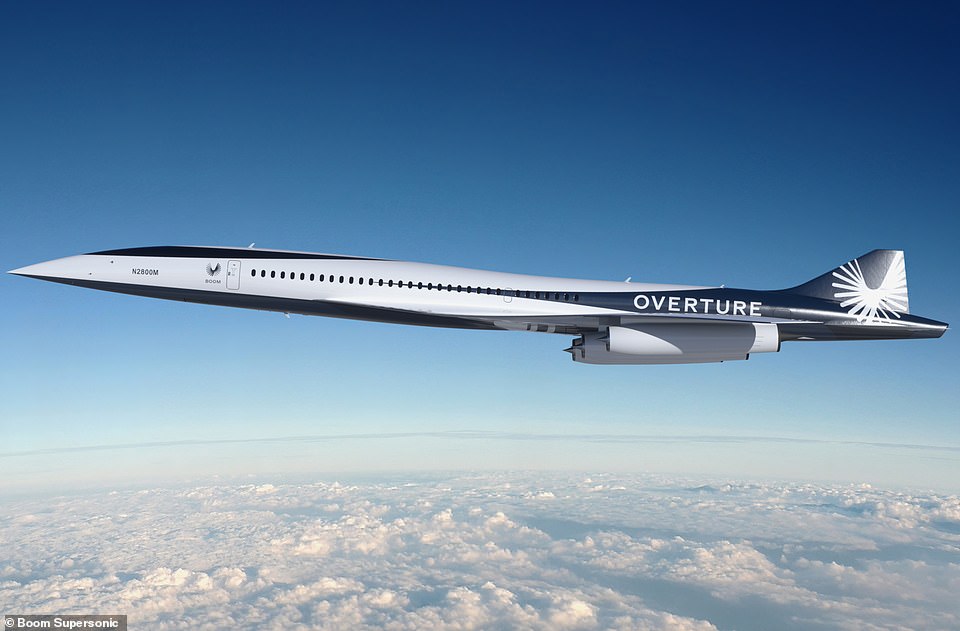 American Airlines on Tuesday agreed to buy up to 20 Overture jets (above) from aircraft maker Boom Supersonic, vowing to cut the time of long-haul flights over water nearly in half

Overture is built to operate on 100 per cent sustainable aviation fuel – jet fuel made from sustainable and renewable sources, rather than fossil fuels.

‘Environmental performance is being considered in all aspects of Overture, from design and production to flight and end-of-life recycling,’ Boom Supersonic said.

A BRIEF HISTORY OF CONCORDE: THE FIRST COMMERCIAL SUPERSONIC JET

Concorde was a turbojet-powered supersonic passenger jet that was operated until 2003.

It was first flown in 1969, but needed further tests to establish it as viable as a commercial aircraft.

Concorde entered service in 1976 and continued flying for the next 27 years.

It is one of only two supersonic transports to have been operated commercially.

The other is the Soviet-built Tupolev Tu-144, which ran for a much shorter period of time before it was grounded and retired due to safety and budget issues. 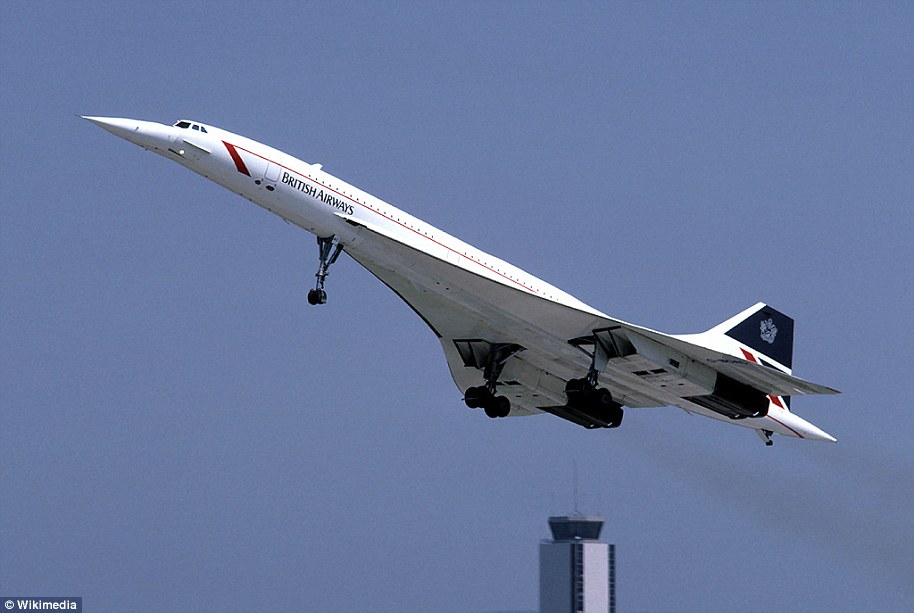 Concorde was a turbojet-powered supersonic passenger jet that was operated until 2003. It had a maximum speed over twice the speed of sound at Mach 2.04 (1,354 mph or 2,180 k per hour at cruise altitude) and could seat 92 to 128 passengers

Concorde was jointly developed and manufactured by Aérospatiale and the British Aircraft Corporation (BAC) under an Anglo-French treaty.

Concorde’s name, meaning harmony or union, reflects the cooperation on the project between the United Kingdom and France.

In the UK, any or all of the type are known simply as ‘Concorde’, without an article.

Twenty aircraft were built including six prototypes and development aircraft.

The research and development failed to make a profit and the two airlines bought the aircraft at a huge discount.

It flew these routes in less than half the time of other airliners.

Over time, the aircraft became profitable when it found a customer base willing to pay for flights on what was for most of its career the fastest commercial airliner in the world.

The aircraft is regarded by many as an aviation icon and an engineering marvel, but it was also criticized for being uneconomical, lacking a credible market, and consuming more fuel to carry fewer passengers than a Boeing 747.

Concorde was retired in 2003 due to a general downturn in the commercial aviation industry after the type’s only crash in 2000, the September 11 attacks in 2001, and a decision by Airbus, the successor to Aérospatiale and BAC, to discontinue maintenance support.