LOVE Island’s Luca Bish has broken the silence on rumours that he’s split from Gemma Owen with a late night bedroom video.

Luca gave an insight into their jokey relationship behind closed doors as Gemma was seen doing a headstand on a bed to try and distract him while he was answering questions.

One fan asked: “Are you and Gemma still together?”

Luca replied: “This one stood out obviously. It’s a really difficult question, obviously it’s very common where people come round and do handstands in your bed so I can understand why you asked.

“But no yeah we are still together… nearly official.” 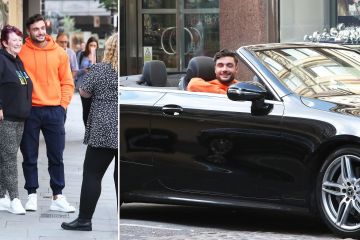 Luca and Gemma placed second on the ITV2 dating show earlier this month, but failed to make it official during their stint in the villa.

Last night Gemma dropped a huge hint that they are now an item.

The 19-year-old shared a snap of herself looking very glam with a pair of undone jeans on, which she captioned: “Boyfriend fit.”

Gemma’s followers rushed to find out if she meant more than just the style, with one person writing: “Is the caption a hint gem?👀.”

Another asked: “Are you and luca official?” as another questioned: “BOYFRIEND????!!!”

Last week the pair jetted off to Portugal so that Luca could FINALLY meet Gemma’s dad.

The equestrian has been plagued by rumours that her dad Michael, 42, doesn’t approve of her choice in Luca.

It was made worse when Luca was noticeably missing from the snaps posted by the former footballer on social media – promoting fans to think that there was frosty air between the pair.

Now, Gemma has hit back that there is “more to it” than meets the eye – insisting her fans have only ever seen short snapshots of their day, including on Love Island.

She told The Six O’Clock Show that Luca had a “thumbs up” from her family, and could now go ahead and make things official.

“Family thumbs up, very good,” she explained. “We had a little trip, a bit of work, bit of relaxing, met all of them there. That was really nice.

“Now we’ve got the approval, the ball’s in his court. Just waiting for him.”

The Inspector is wooed by The Grove of Narberth, a 'beautiful, somewhat quirky' B&B in Wales