ARSENAL starlet Salah Oulad M’Hand is reportedly closing in on a loan switch to Championship side Hull.

The Yorkshire outfit are claimed to have the option to turn his temporary switch into a permanent stay next summer.

Big things are expected of teenage midfielder Salah, who was an unused substitute in five Premier League matches last season.

The Holland Under-17 youth international was also named on the bench for the Gunners’ FA Cup third round defeat against Nottingham Forest in January, as well as three Carabao Cup ties.

But the youngster, who is tied down at the Emirates until 2025, is keen to depart North London in his quest to play regular first team football.

According to the Hull Daily Mail, the Tigers have agreed a loan with a buy-option for the ex-Feyenoord youth ace. 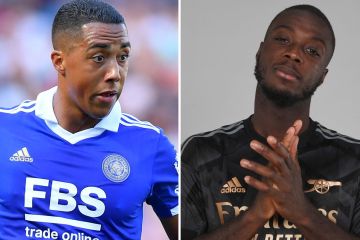 Personal terms have already been agreed with Hull and Salah, who have made landing the player a top priority this window.

It is understood that Salah will wear the No10 jersey at the MKM Stadium.

Arsenal are said to have been reluctant to let him leave, but Salah’s eagerness to join Hull has proved vital in the transfer.

The central midfielder is expected in Hull on Thursday with only formalities needed to be completed before the move is officially announced.

Salah is just one of a number of youngsters that Arsenal have allowed to depart on loan.

Striker Folarin Balgoun has been snapped up by Reims, with the ex-Middlesbrough loanee scoring in each of his first two Ligue 1 games.

Meanwhile teenage midfielder Charlie Patino has joined Championship side Blackpool until the end of the term.

Mexico international Marcelo Flores will be plying his trade in Spain this season with Segunda Division outfit Real Oviedo.

And shot-stopper Arthur Okonkwo has signed for League Two club Crewe, where he has already featured five times.

The bizarre items that Britons take on holiday, including kettles, oven trays and TOASTERS