They’re one of the most vital pollinators on the planet, but new research shows that bees have been increasingly stressed by changes in climate for almost a century.

The discovery is based on an analysis of bumblebee specimens housed in museums across the UK.

Researchers from Imperial College London investigated asymmetry in the bumblebees’ wings, as an indicator of stress.

This stress will have been caused by an external factor that affected their normal growth – namely the weather.

A study of four separate bumblebee species showed that each displayed more stress as the century progressed, from its lowest point around 1925.

The team compared annual average temperature and rainfall during the year of collection. In hotter and wetter years the pollinators displayed greater lopsidedness. 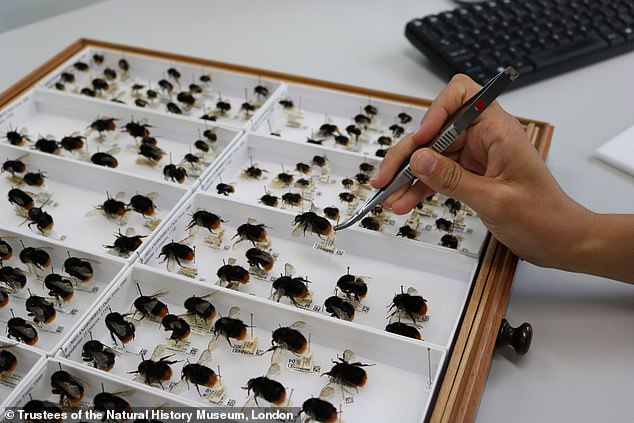 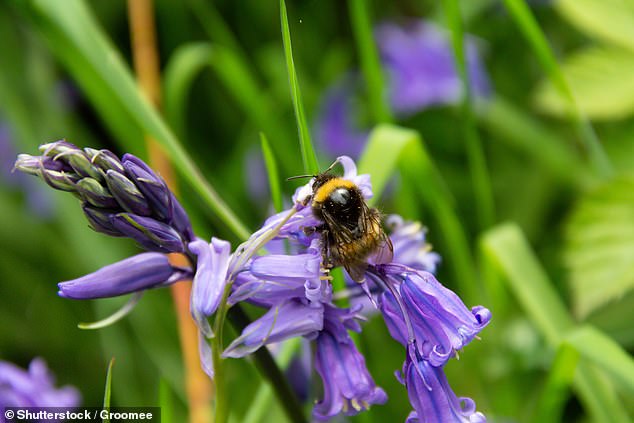 A study of four separate bumblebee species showed each displayed more stress as time wore on, from its lowest point around 1925

Honeybees cannot walk in a straight line after they have been exposed to pesticides as they damage their nervous system, a study has found.

The chemicals sulfoxaflor and imidacloprid are both commonly sprayed onto plants with the intention of killing insects.

However it is recommended that they are not used when pollinators, like bees, are expected to be present, due to concerns about their effects on them.

Now, researchers at the University of Oxford have proven that the pesticides impair the honeybees’ ‘optomotor response’.

This response manifests as movements that help insects orient themselves when they are blown off-course while walking or flying.

‘With hotter and wetter conditions predicted to place bumblebees under higher stress, the fact these conditions will become more frequent under climate change means bumblebees may be in for a rough time over the 21st century,’ said senior author Dr Richard Gill, of Imperial College London.

In Britain, a third of wild bees and are in decline. If current trends continue, certain species will be lost altogether. They pollinate flowering crops, such as oil seed rape.

Lead author Aoife Cantwell-Jones, also from Imperial, said: ‘By using a proxy of stress visible on the bee’s external anatomy and caused by stress during development just days or weeks before, we can look to more accurately track factors placing populations under pressure through historic space and time.’

As well as revealing past stress in bees, the study can help predict when and where their survival will be threatened most in the future.

In a pioneering breakthrough, methods typically employed for woolly mammoths and early humans were introduced for the first time used in insects.

By taking just a single leg from each of the bees, they revealed the reported stress may lead to genetic diversity loss.

The data reveals how bee DNA has altered, shedding light on how whole populations have either adapted to fresh environments – or been wiped out.

Co author Dr Victoria Mullin, from the Natural History Museum, said: ‘Museum insect collections offer an unparalleled opportunity to directly study how the genomes of populations and species have been affected by environmental changes through time.

‘However, they are a finite resource and understanding how best to utilise them for genetic studies is important.’ 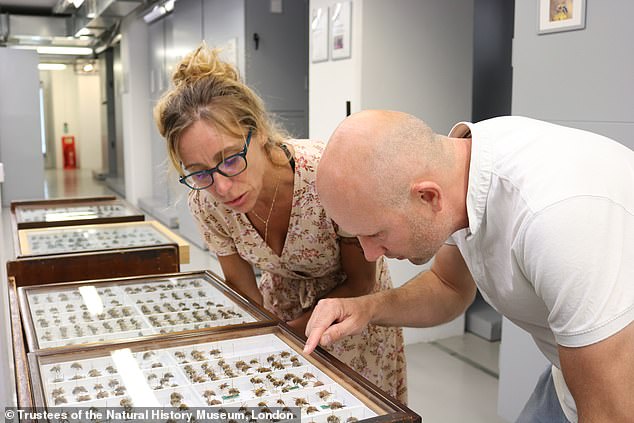 As well as revealing past stress in bees, the study can help predict when and where their survival will be threatened most in the future. Pictured: Dr Richard Gill and Dr Selina Brace investigate the bumblebee collections at the Natural History Museum, London

Previous research has found every square kilometre in the UK has lost an average of 11 species of bee between 1980 and 2013.

It has far-reaching consequences. Insects provide a food source for many birds, amphibians, bats and reptiles.

Senior author Professor Ian Barnes, also from the Natural History Museum, said: ‘One of the main problems with museum collections is the quality of DNA can be very variable, making it difficult to predict which type of analyses we should do.

‘We now have a much better idea about DNA preservation in insect collections, which is a massive boost to our ongoing work to understand the history and future of insect populations.’

A recent scientific review of insect numbers around the world suggested that 40% of species were undergoing ‘dramatic rates of decline’. 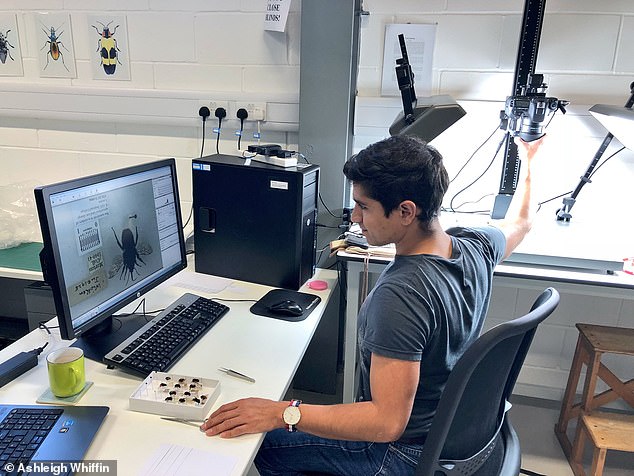 Dr Gill added: ‘These studies showcase the value of leveraging museums specimens to go back in time and unlock the past’s secrets.

‘But what we have done is just the beginning, and by continuing our work with these vital public collections and collaborating with curators we can only discover more.

‘This work was part of a Natural Environment Research Council-funded project and could not have been achieved without the commitment, hard work, and diligence of the museum curators, and our other collaborators.

‘We are also grateful to BBSRC (Biotechnology and Biological Sciences Research Council) funds in supporting the generation of the bumblebee reference genome.’

The study is in the Journal of Animal Ecology.

Bumblebees CAN feel pain: Study shows insects can suppress their withdrawal reflexes in exchange for a sweet treat

While the idea of getting stung isn’t exactly appealing, a new study may have you thinking twice before swatting away any pesky bees.

Researchers from Queen Mary University of London have revealed that bumblebees can feel pain.

In the study, the team showed that bumblebees can modify their response to ‘noxious’ (painful) stimuli in a similar way to other animals that are known to feel pain.

‘If insects can feel pain, humans have an ethical obligation not to cause them unnecessary suffering,’ said Matilda Gibbons, first author of the study.

‘But the UK’s animal welfare laws don’t protect insects – our study shows that perhaps they should.’

Anne Heche's death is ruled an ACCIDENT by coroner

Why you should stop adding vinegar to your washing machine: Repairman claims vinegar destroys pipes