A flight attendant has shared some of the bizarre things that could land you a hefty fine whilst holidaying Venice – from feeding the pigeons to sitting in the wrong place.

Barbie, 29, from Argentina, works as a flight attendant for La Azafata and regularly shares her top travel tips and secrets with her three million followers on TikTok.

And it seems that while Venice might be one of the most romantic cities in the world, it is also one of the strictest when it comes to fines for tourists. 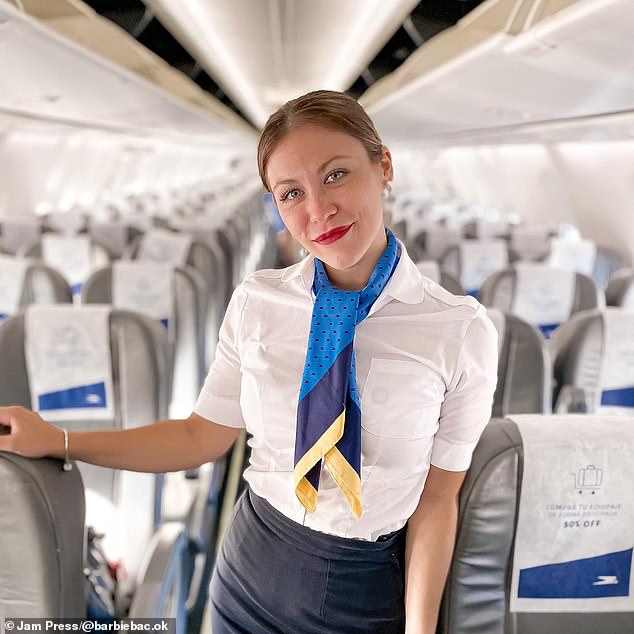 Barbie, 29, from Argentina, works as a flight attendant for La Azafata and regularly shares her top travel tips and secrets with her three million followers on TikToK 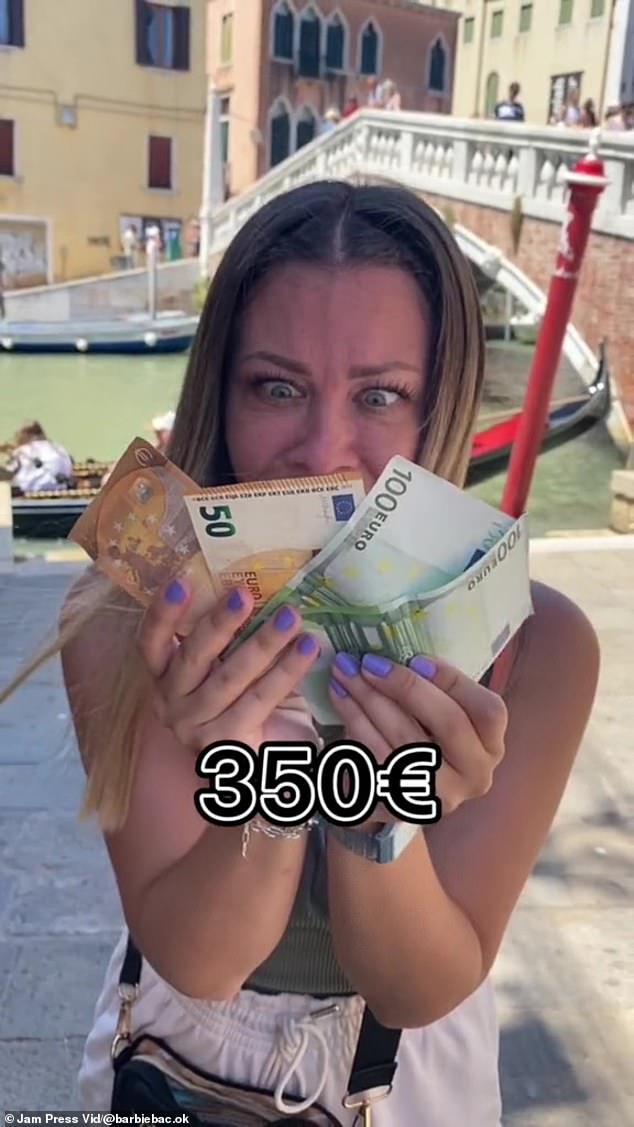 How much?! If you take a sneaky dip in the famous canals then you could be fined up to €350 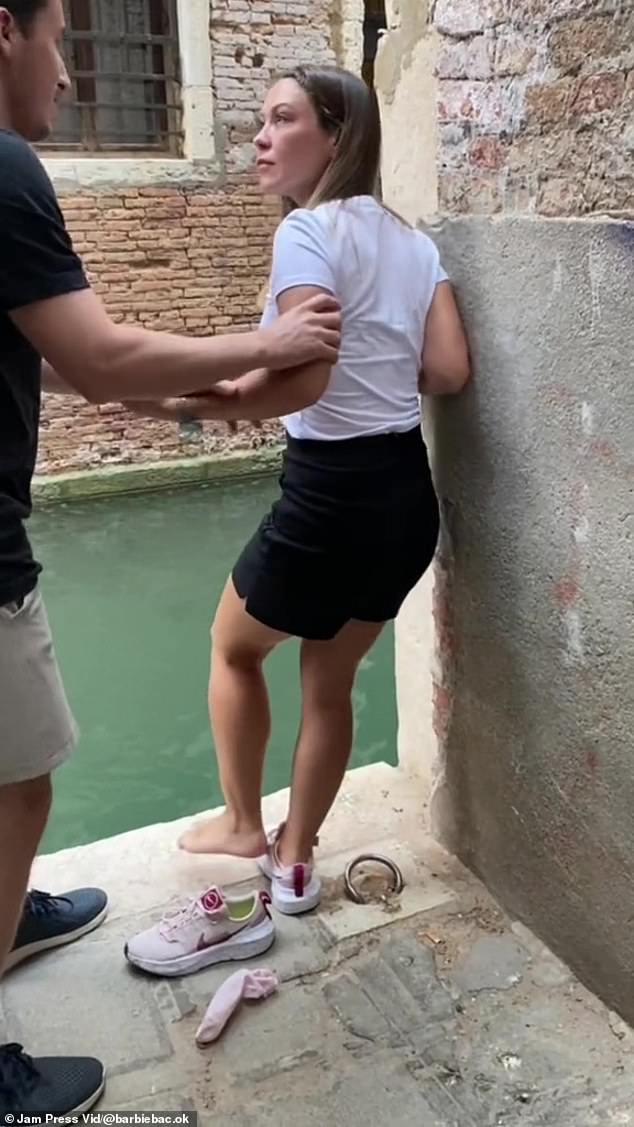 Don’t take a dip or you might pay the price! Even sitting by the sides of the canals can prompt a hefty fine from officials. However people are seen doing this regularly in Venice, so whether it is regularly enforced or not is another matter

In a clip Barbie shared with her followers, which has already received more than 7.4 million views and 564,400 likes, she was seen exploring the canals of Venice.

She revealed that doing things like feeding pigeons, sitting down on monuments and swimming in the canals can all induce eye-watering fines.

The city of Venice in Italy is known for being an expensive place for tourists, and becomes flooded with visitors during summer.

The average price of a cup of coffee in the city centre is around £4 and if you choose to sit down while you sip your drink, you may have to pay even more.

Savvy tourists always recommend eating, drinking and shopping away from tourist hotspots such as the famous Piazza San Marco(St Mark’s Square) because prices are a lot less. 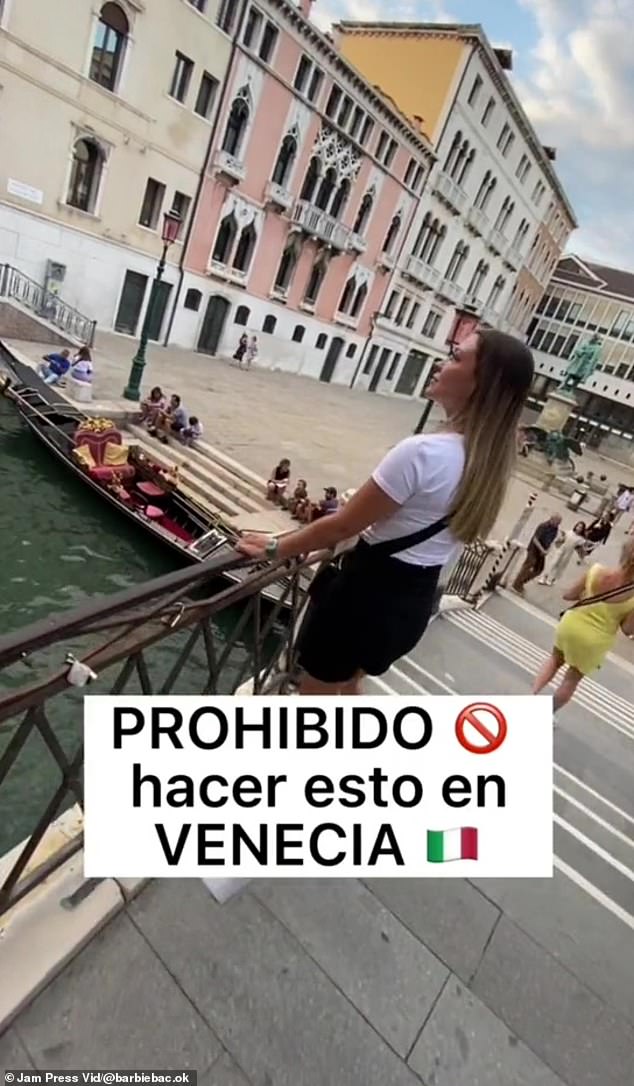 Barbie warns people in her video, pointing to information signs that may not be obvious to tourists when they visit. Swimming, sitting by or leaning by the railings in Venice are forbidden. 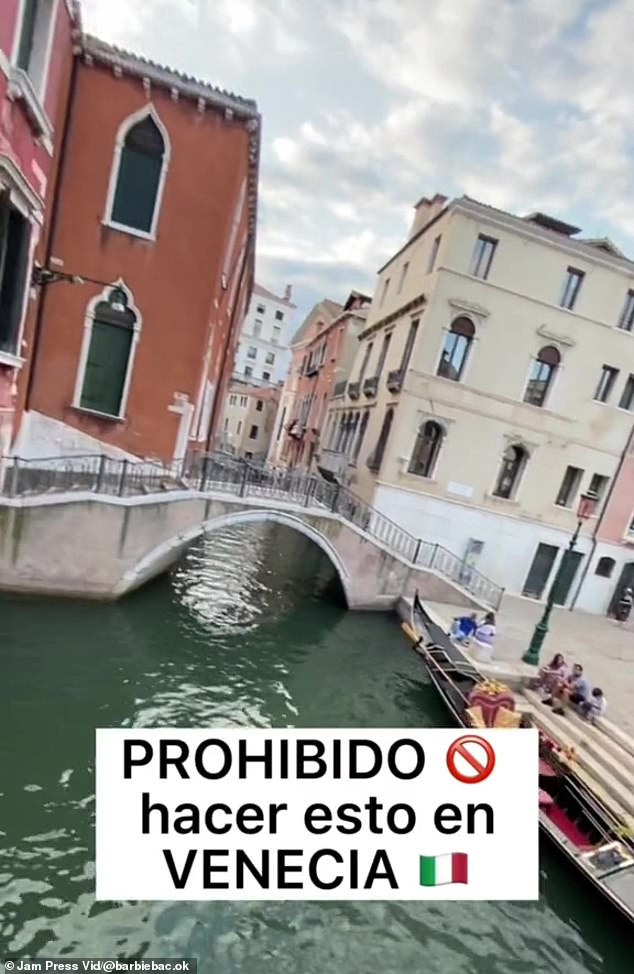 Barbie warns people in her video, pointing to information signs that may not be obvious to tourists when they visit, such as swimming in the canal

But coffee and trinkets aren’t the only things tourists are shelling out on in the popular holiday destination, according to Barbie, who unveilied the everyday things that can see you whacked with a fine in the floating city.

In her TikTok video she paused at an information sign, warning users of the restrictions they might not have noticed.

In the video she said: ‘Do you know that in Venice you may be fined for doing this…

‘It’s forbidden to sit on the floor, steps, monuments or the side of the canals. Not even to eat or drink. 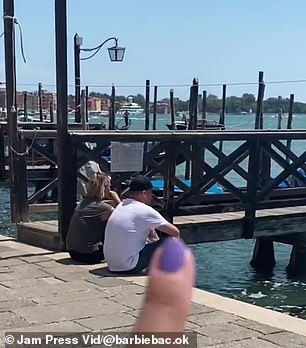 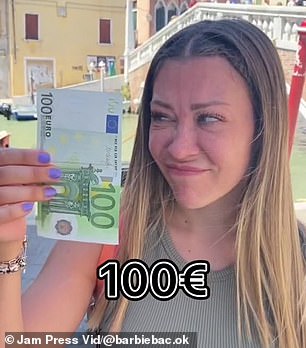 An expensive place to sit…. Barbie shows in her video that sitting on the edge of the canals to admire the famous views of Venice in Italy might mean you are fined 100 Euros 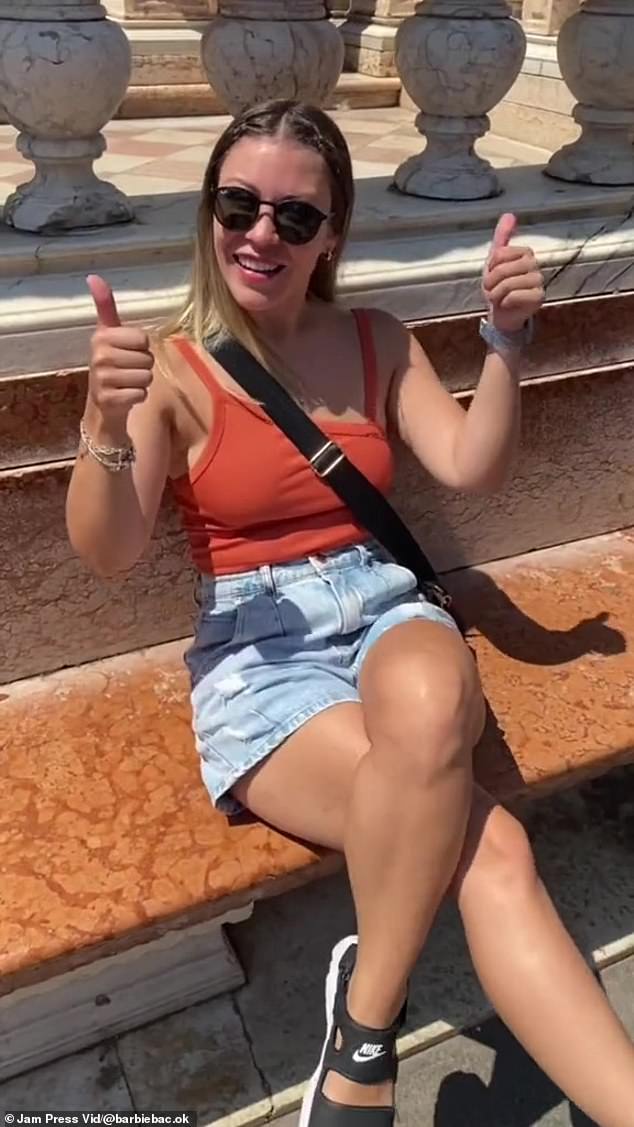 The right way to sit, on a bench- demonstrated by Argentinian flight attendant Barbie in her video on TikTok 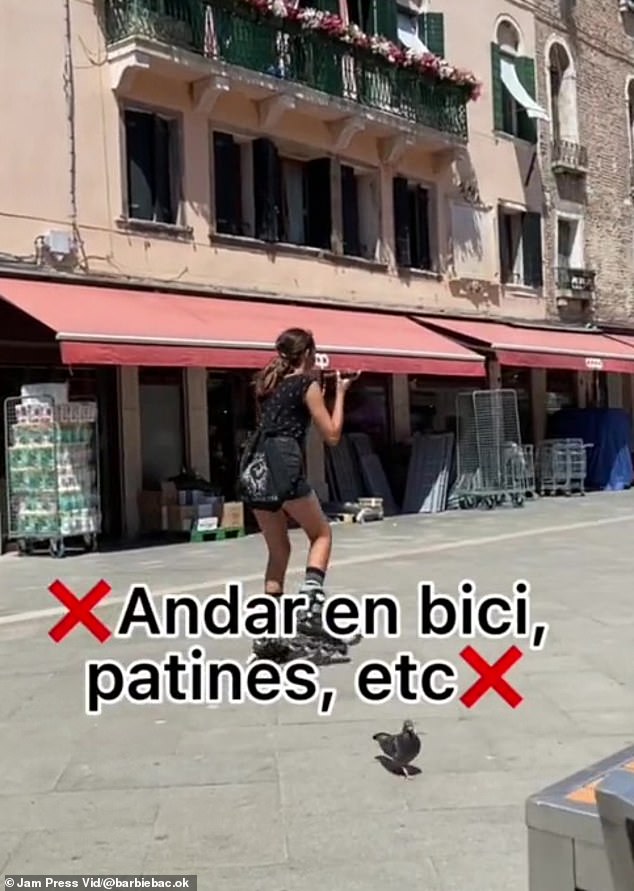 Dumping rubbish on the floor (which you shouldn’t do anyway) or roller-skating can also mean a fine, as well as using a bike in the city 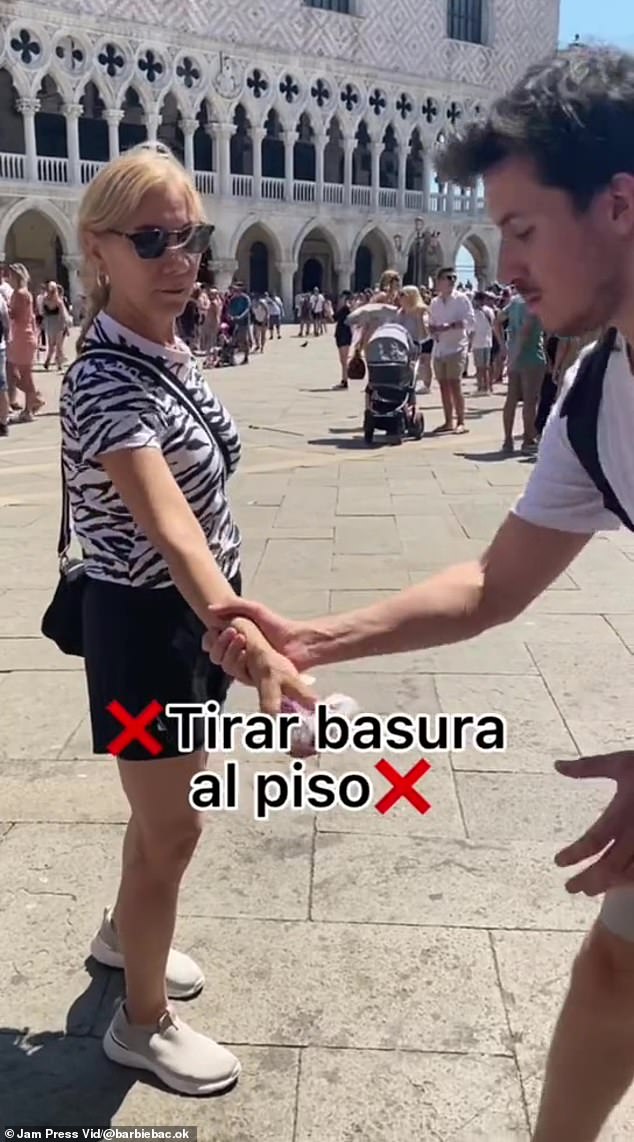 Dumping rubbish on the floor (which you shouldn’t do anyway) can also mean a fine, although the same is true in a lot of major cities

Reacting to the revelations, TikTok users were quick to have their say on the matter.

‘Everything is forbidden. I don’t want to go anymore,’ wrote one user. 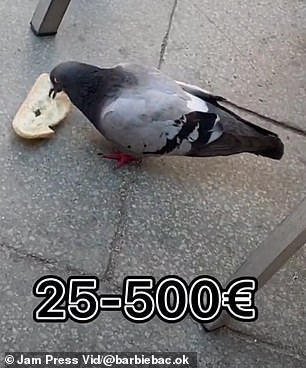 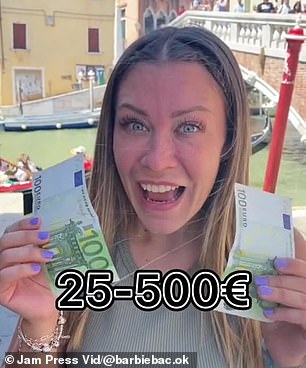 Don’t feed the pigeons! This one is generally a divisible faux pas but not usually deserving of a fine! You can be fined up to 500 Euros for giving the birds some bread

‘Can you blink?’ commented a second user.

‘Perfect. Only that way a place is respected and preserved,’ wrote a fifth.

Other restrictions include staying to the right when walking near waterways, not walking around in swim wear, and tourists are forbidden to set up camp in the city.

Though the rules may seem unduly strict, Venice’s efforts to keep the streets free of litter and graffiti have helped preserve the city for all to enjoy.

Amol Rajan is revealed as the next host of University Challenge

The bizarre items that Britons take on holiday, including kettles, oven trays and TOASTERS