France has been battered by deadly 140mph storms with five people killed in swirling hurricane-force winds in Corsica as floodwater gushes through the island.

Terrifying footage shows debris flying through airports, hail pummelling homes and destroying windows, and chairs and trees being ripped out and hurtling through the sky.

A teenage girl and an elderly woman were among the dead as hail, heavy rain and winds swept across the island as mainland France – which has been hit by a series of heatwaves and severe drought – saw more rain in just a few hours than in recent months combined.

The 13-year-old girl was killed at a campground near Sagone, on the island’s rugged western coast, where nine others were also injured, including one seriously, rescue workers told AFP.

A 72-year-old woman was killed when her car was struck by a beach hut roof in Coggia, authorities said.

The third victim was a 46-year-old man who died when a tree fell on a bungalow in Calvi. 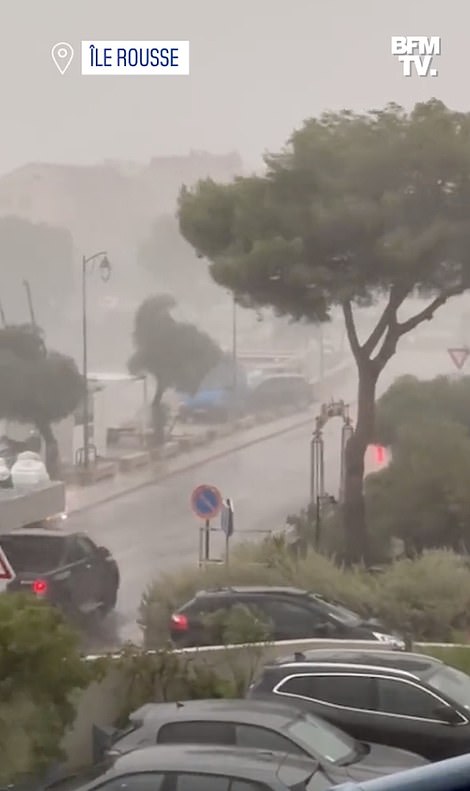 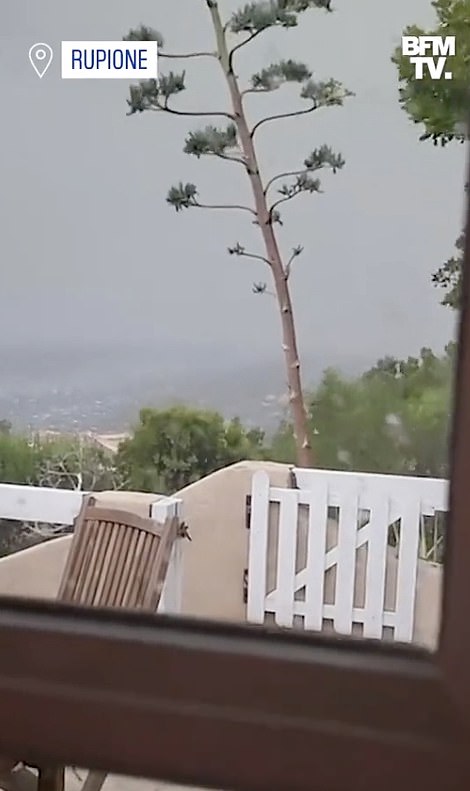 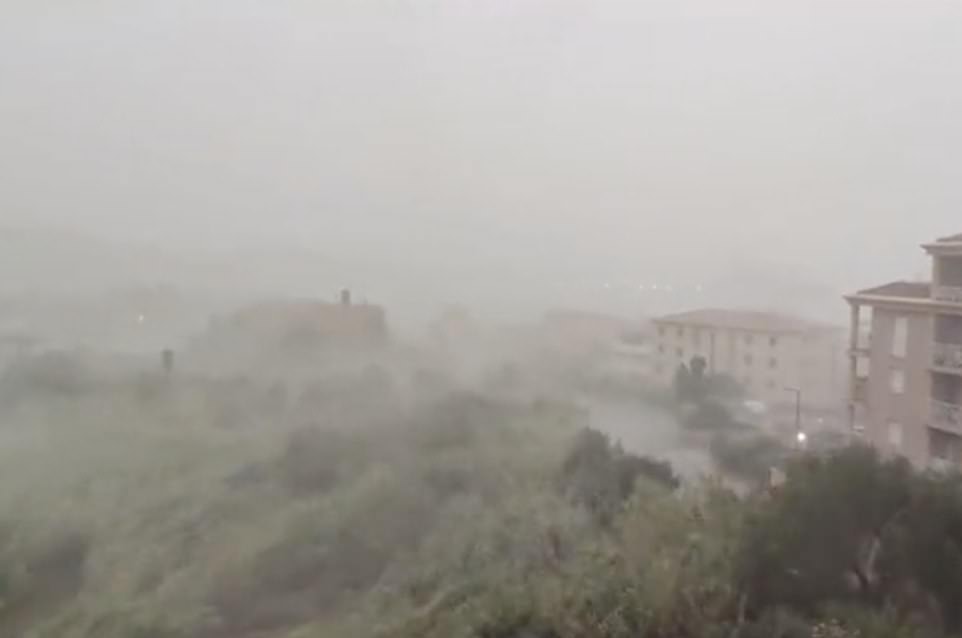 Maritime authorities reported 60 to 70 sea rescue operations, mainly along the western coast that bore the brunt of the overnight storm 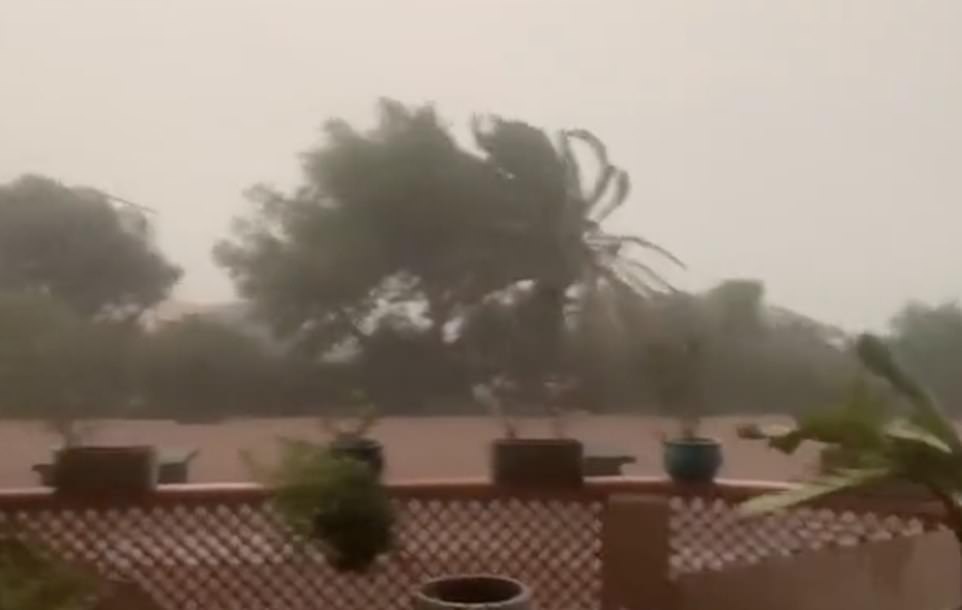 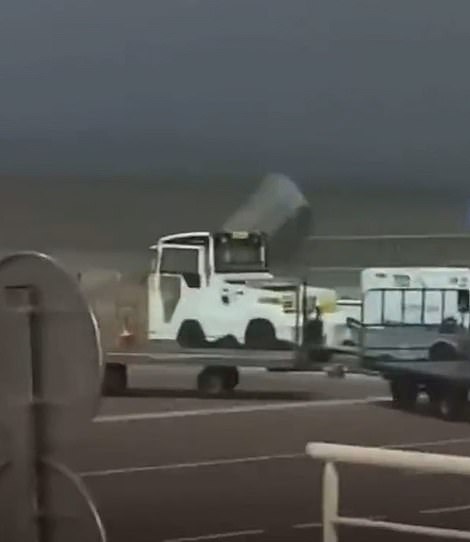 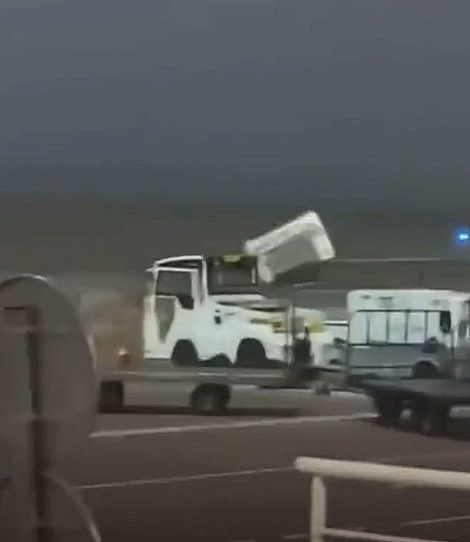 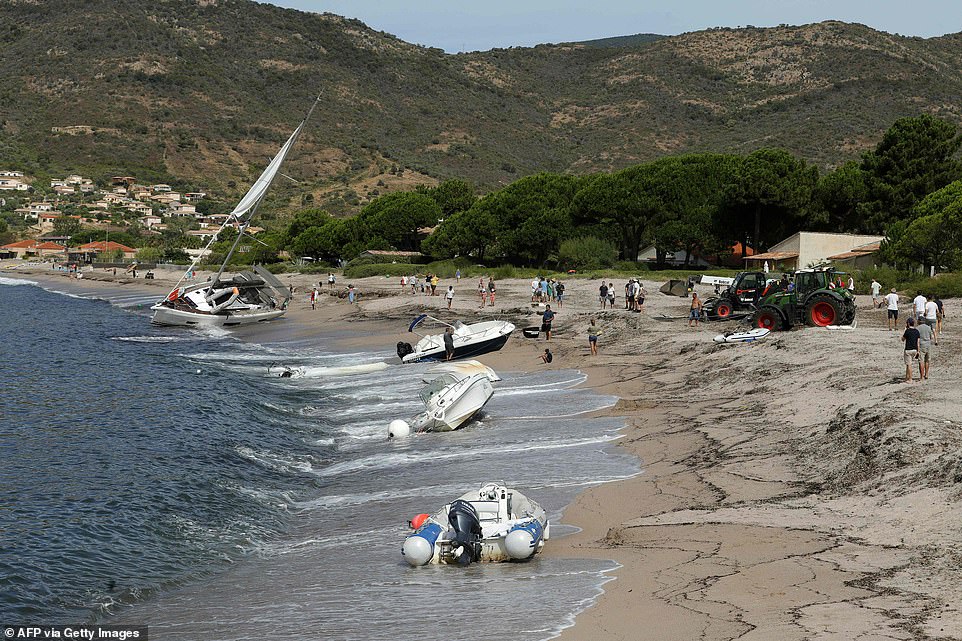 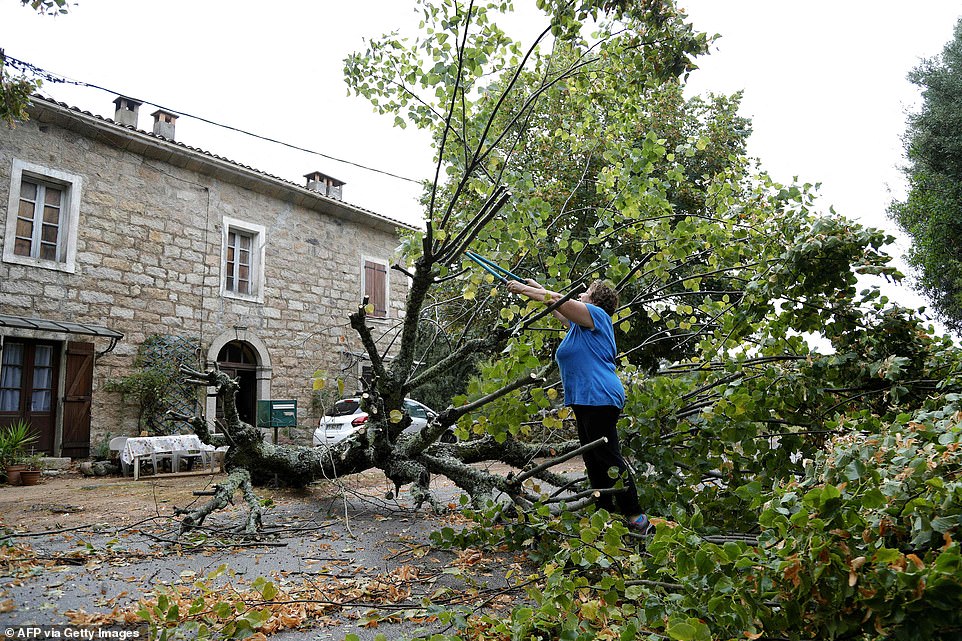 A woman tries to cut a tree which was torn down in Marato, close to Cognocoli Monticchi after strong winds on the French Mediterranean island of Corsica 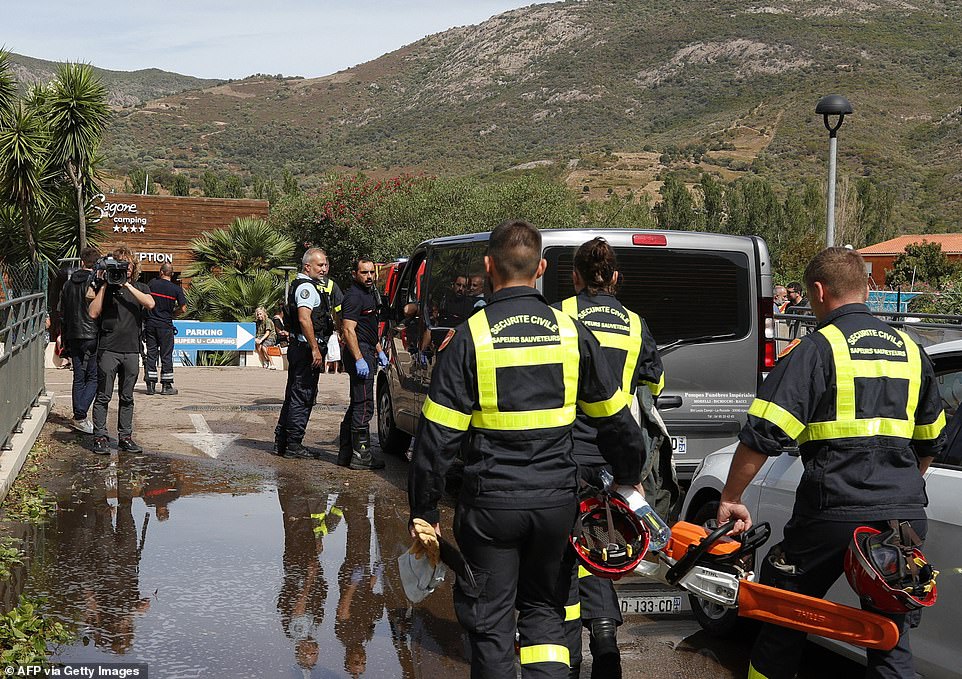 French Securite Civile rescuers enter the Sagone camping in Coggia, where a tree felt on a tent amid the freak weather

At least twelve people were injured, including one critically, and rescue operations were under way offshore, authorities added.

‘I was woken around 7:30 am by a very huge storm’ that knocked out both electricity and mobile phone networks, said Benjamin Roux, a 26-year-old tourist, at the beach near where the woman was killed.

He had been planning to go scuba diving, but instead helped the passengers of a boat who were sleeping aboard when it was suddenly thrown onto the shore by the choppy waves.

‘They managed to get out without injuries, but they’re just devastated,’ he told AFP.

Maritime authorities later said a fisherman had died near Girolata, and a female kayaker near Erbalunga, north of Bastia.

‘Several rescues of pleasure boats’ were also undertaken near the capital Ajaccio, said Jean-Jacques Peraldi, head of the SDIS fire and rescue service.

It subsequently lifted a major storm warning, indicating the worst had passed for the Mediterranean island.

About 45,000 households were without power on the island because of the storms, according to French electricity company EDF.

The president of the Executive Council of Corsica, Gilles Simeoni, described a brief yet ‘extremely violent and entirely unpredictable’ weather event that lasted ‘dozens of minutes’. 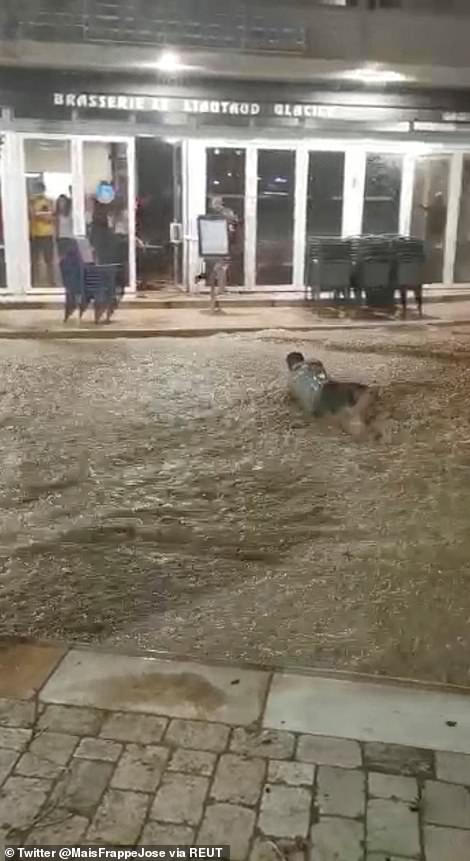 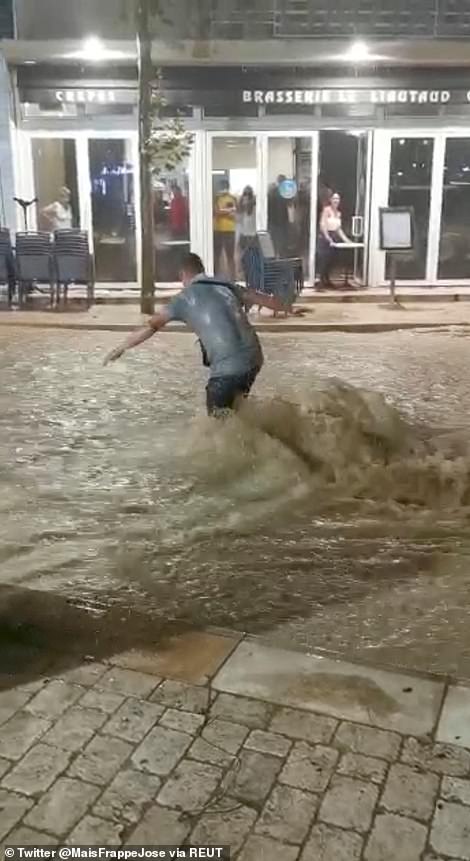 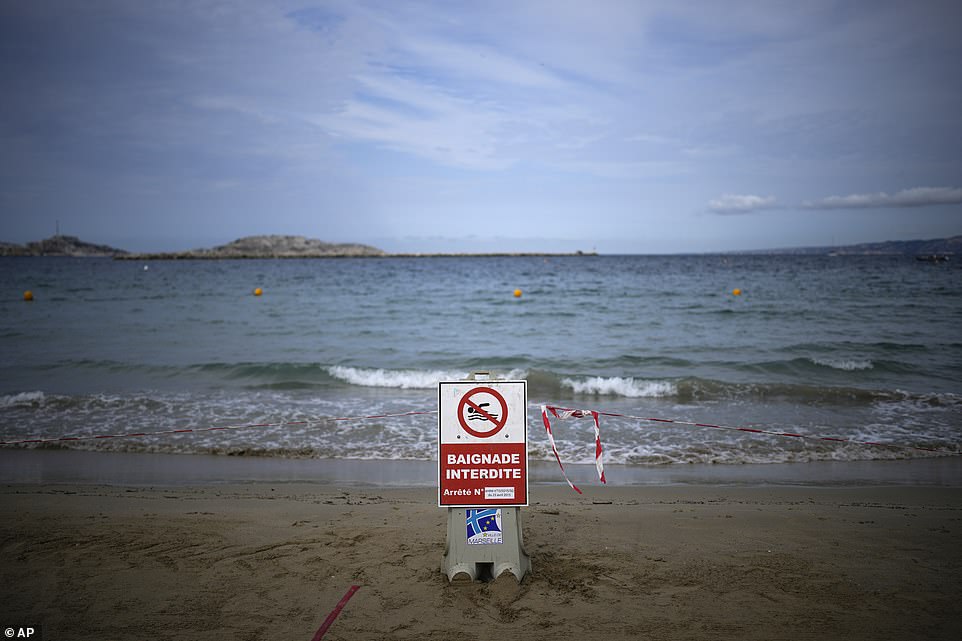 A sign reading ‘swimming prohibited’ sits on a beach with high levels of pollution the morning after a storm passed through Marseille, southern France 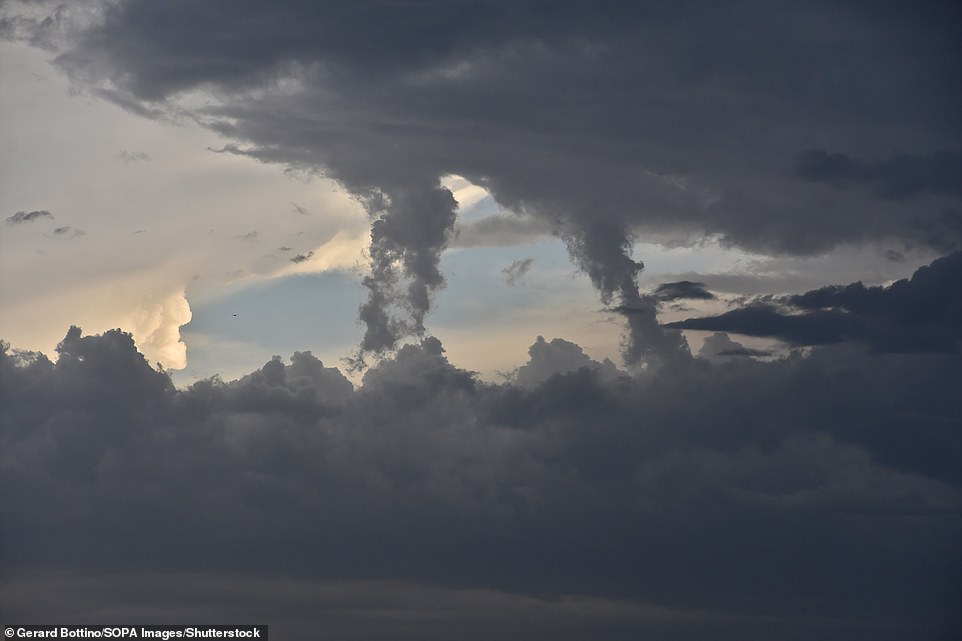 On Wednesday evening in Marseille (pictured), streets were flooded and streams of water ran down steps in the port city, videos shared on social media showed

About 60 rescue operation were ongoing along the western coast of Corsica to help several grounded and wrecked ships, the French maritime authority for the Mediterranean Sea tweeted.

On France’s mainland, grid operator Enedis said about 1,000 households were without power after a storm hit the southern Loire and Ain departments.

On Wednesday evening in Marseille, streets were flooded and streams of water ran down steps in the port city, videos shared on social media showed.

Further north, drought has left the river Loire, famous for castles along its banks, so shallow that even flat-bottomed tourist barges can barely navigate it.

Winds over 60mph were recorded at the top of the Eiffel Tower during a flash flood Tuesday.

In one street in mainland France, terrified residents watched from their windows as torrents battered homes in the village of l’Etrat on the outskirts of Saint-Etienne yesterday evening. 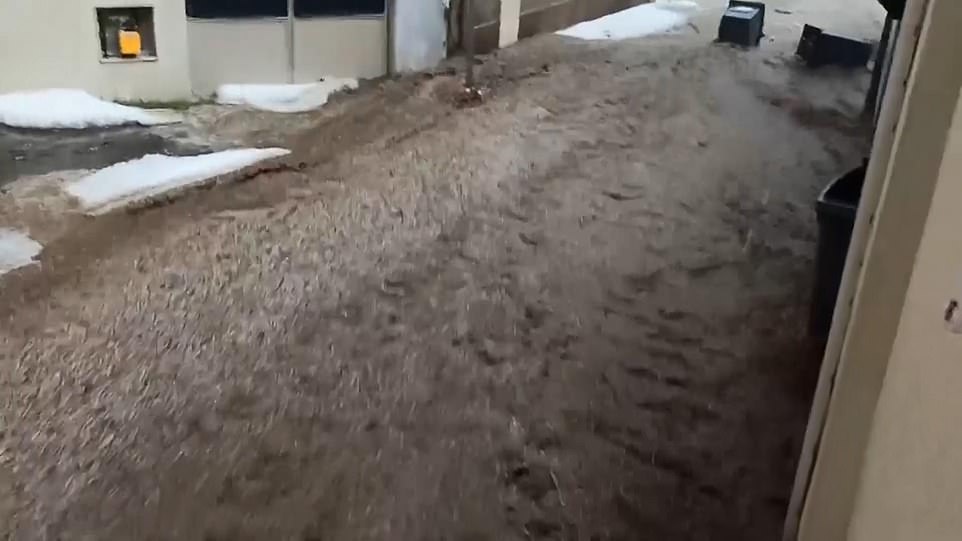 In one street in mainland France, terrified residents watched from their windows as torrents battered homes in the village of l’Etrat 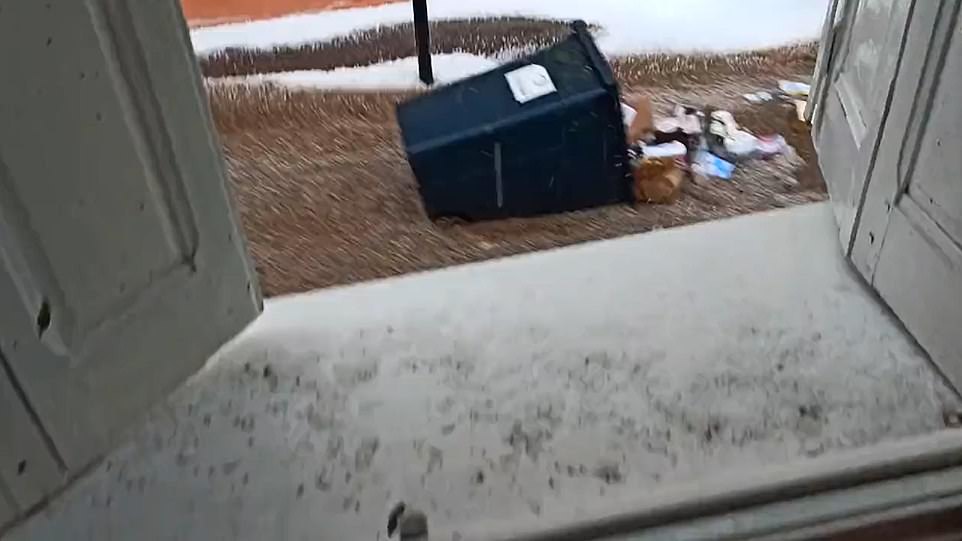 A wheelie bin and other piles of rubbish were seen being carried away by the deluge – which resembled powerful river rapids.

In Italy, two people died and 100 others were evacuated as bad weather toppled trees and tore off roofs in Tuscany, the region said.

The civil protection agency prepared emergency accommodation in schools and gyms for those forced from their homes after violent winds and rains pummelled the area from the coast to tourist hotspot Florence, killing a man in Lucca and a woman in Carrara, the region said.

Both were hit by falling trees, local media reports said.

Four people were injured by toppling trees at the seaside camping site of Marina di Massa, while four others were rushed to hospital in the mediaeval town of Barga after the car they were travelling in was hit by a torn-off roof, according to local news site Toscana in Diretta.

In northern Italy, a violent overnight storm forced the closure of a train line southeast of Genoa after high winds carried changing booths and other items from nearby beaches onto the tracks, damaging the electrical circuitry.

The mayor of Sestri Levanti, Valentina Ghio, said whirlwinds were expected, and she appealed to visitors to stay away from beaches until the severe weather had passed.

Hail the size of walnuts pummelled areas of the Liguria region with enough force to break the windows of homes and damage orchards and gardens.

While northern Italy has suffered its worst drought in decades this year, heavy rains in recent days that brought scattered hailstorms, whirlwinds and flooding have damaged or destroyed entire crops of fruits and vegetables along with vineyards and olive orchards, according to Italian agricultural lobby Coldiretti.

Fashion designer Giorgio Armani and dozens of others were forced to flee from their vacation villas overnight as firefighters worked to extinguish the remnants of two wildfires on the Sicilian island of Pantelleria. 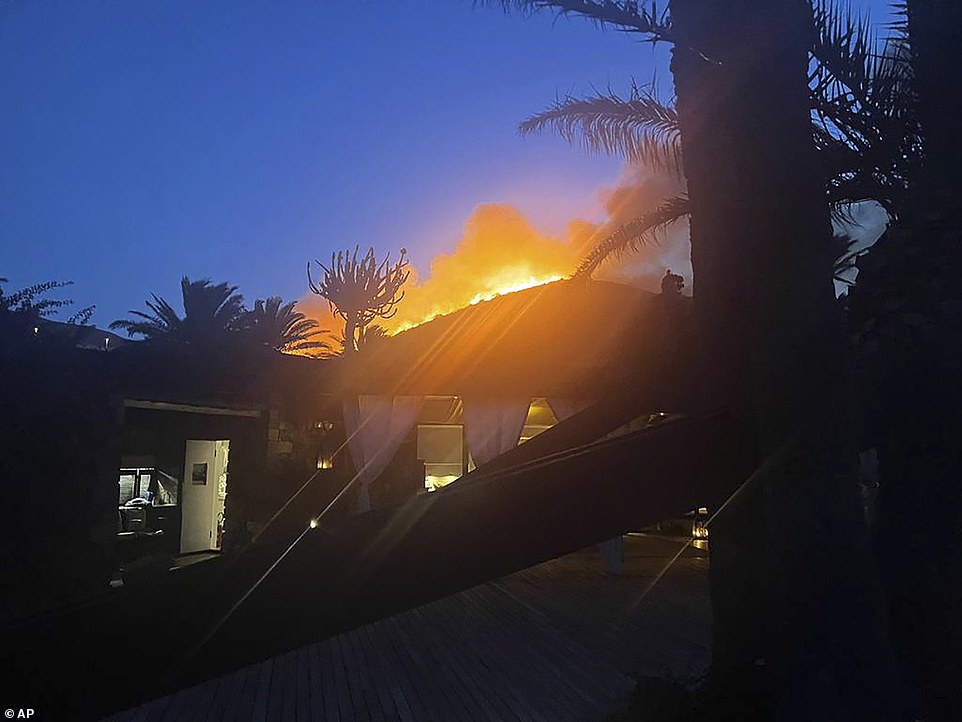 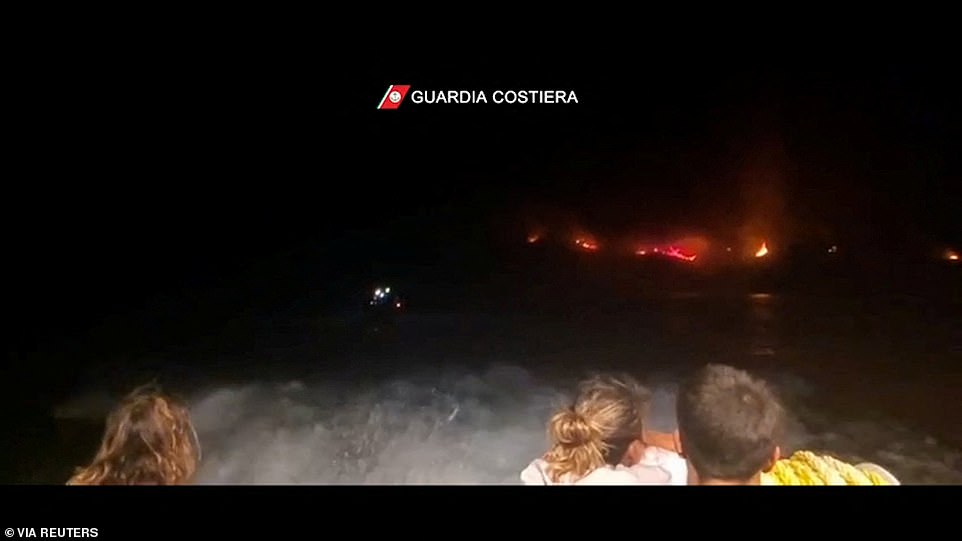 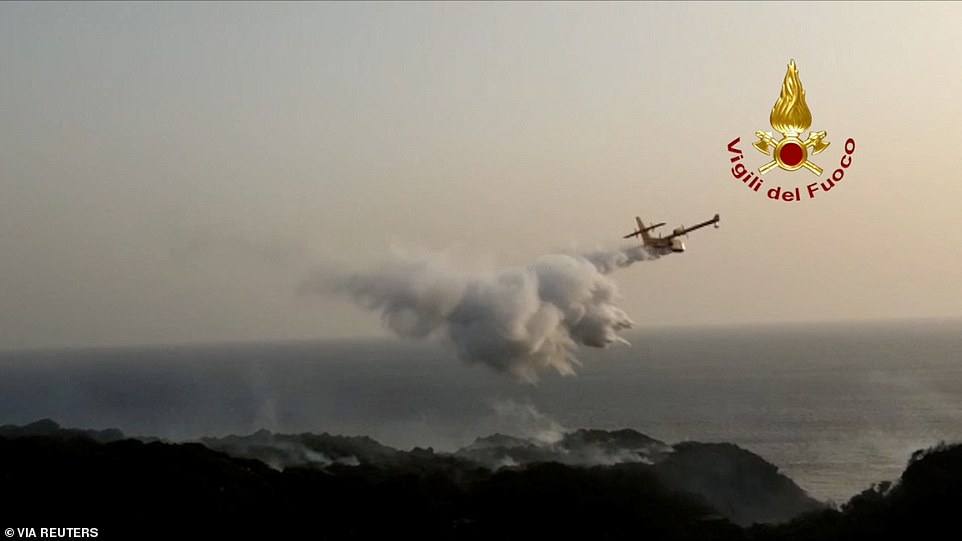 Firefighters used Canadair planes to douse the flames, along with ground teams to protect homes. Authorities said no structures appeared to have been lost 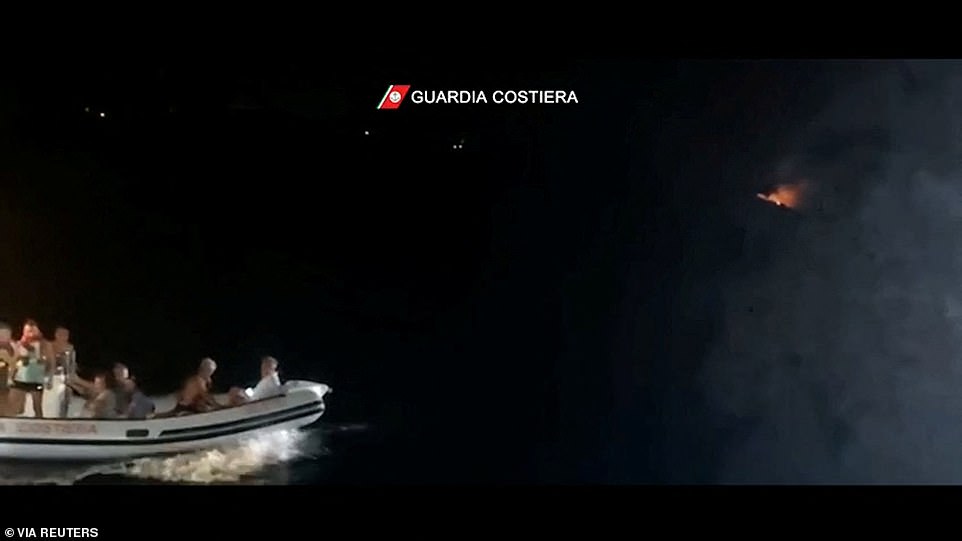 The head of the region’s civil protection agency, Salvatore Cocina, said arson is suspected in two wildfires that forced around 30 people to seek refuge in boats or on safer parts of the island

A photo shows flames that appear to encroach on Armani’s villa, but his press office said they stopped short of the property. Armani and guests evacuated to a boat in the harbour overnight.

The head of the region’s civil protection agency, Salvatore Cocina, said arson is suspected in two wildfires that forced around 30 people to seek refuge in boats or on safer parts of the island.

Firefighters used Canadair planes to douse the flames, along with ground teams to protect homes. Authorities said no structures appeared to have been lost.

The island’s mayor, Vincenzo Campo, told the ANSA news agency two Canadairs were working on putting out the last flames on difficult terrain and that the wind had dropped off.

‘After the great fear of last evening and the night spent at work, Pantelleria is returning to normal,’ Campo said. ‘It seems the worst is over.’

Local officials appealed for any information that would help identify the cause of the blaze, which started in two points 400 meters (a quarter-mile) apart.

Pantelleria, located between Sicily and the Tunisia, is a popular beach and trekking destination that includes ancient archaeological sites and natural geographic formations.