A young boy with bright red hair and perfect English hands me two large stones. ‘Here, use these to break down the claws,’ he says.

I pick them up and start bashing away in search of the prized meat.

There are eight of us sitting around a long wooden table laden with platters of ice-cold crayfish, shrimp and crab claws, along with bowls of aioli, seaweed-infused mayonnaise and cubes of hard, salty local cheese. 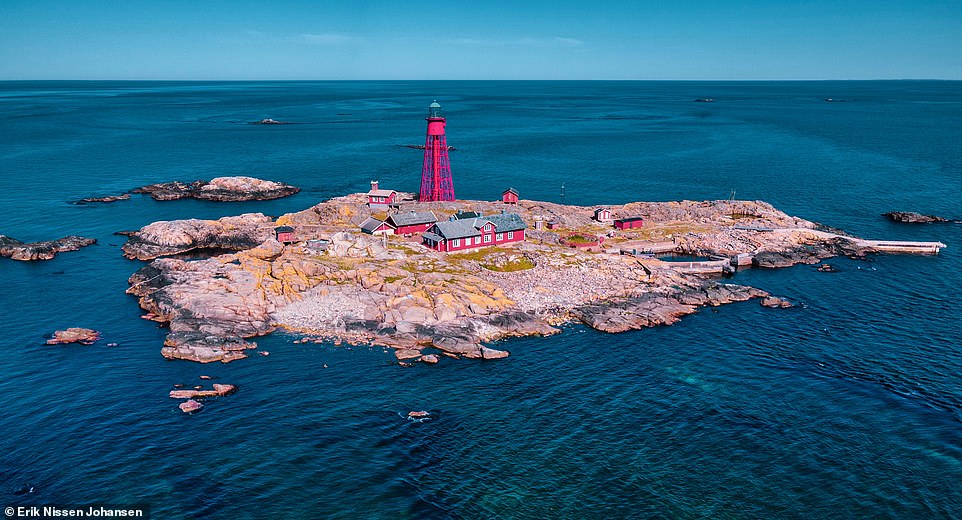 Remote: Harriet Sime stays on the island of Pater Noster (pictured), off the west coast of Sweden, which has a 19th-century lighthouse and a new hotel 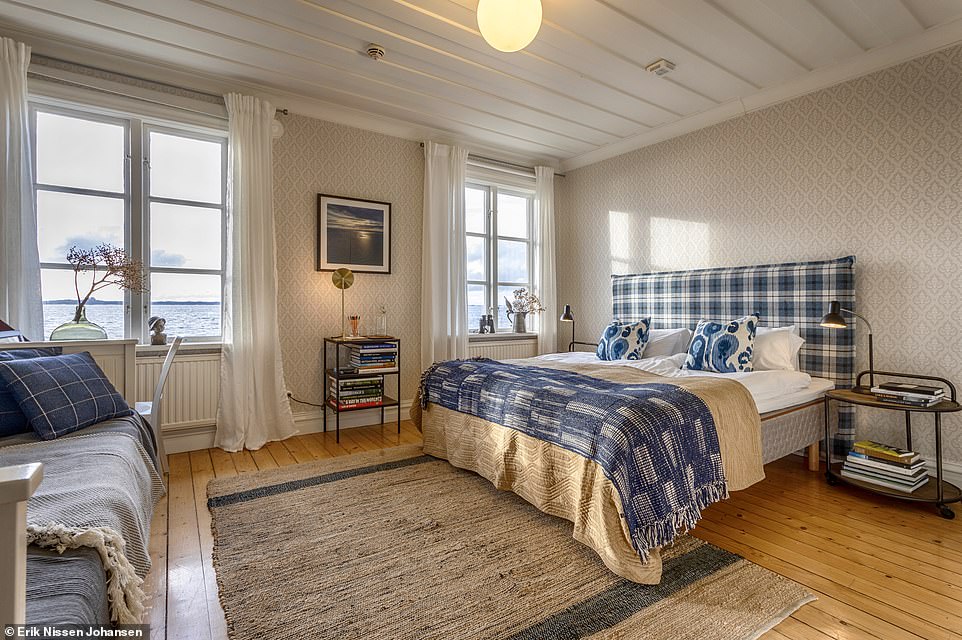 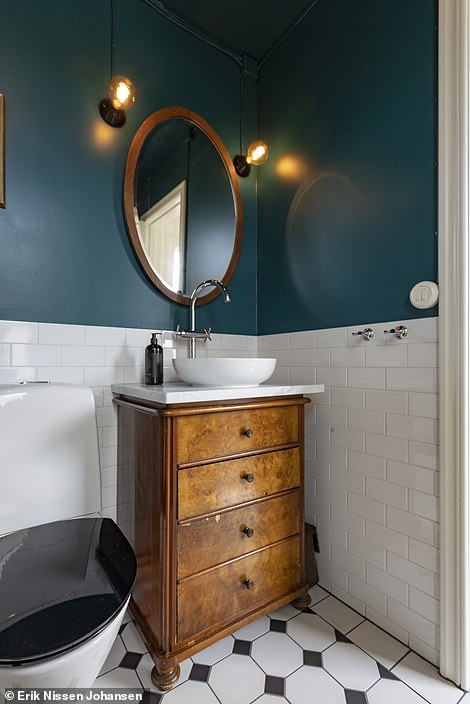 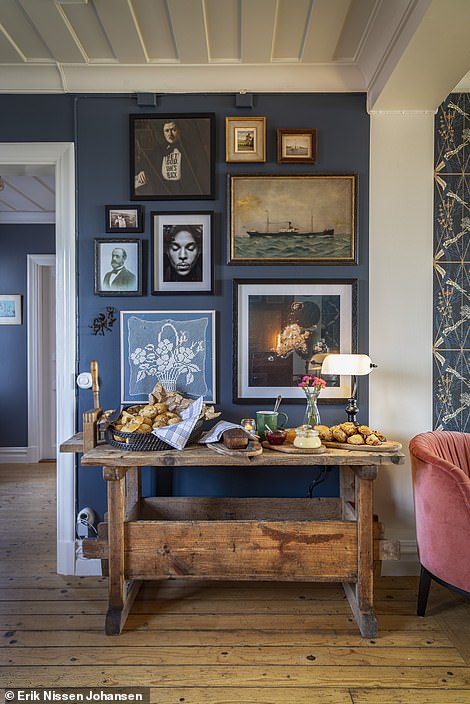 Pictured left is one of the bathrooms on the island, with a mix of modern and antique furnishings. On the right is a spread of treats in one of the hotel’s communal areas

My friend and I are the only Britons. The other guests, all Swedish, roll up their sleeves and tuck in, bashing, twisting, peeling and scooping with a precision that says they’ve done this a fair few times before.

It’s dirty business (I even manage to cut myself and, embarrassingly, have to dash out for a plaster), but we quickly forget our British reserve and, with the help of our new friends, devour the lot, the salty juice running down our wrists and off our chins.

We’re staying on Pater Noster, a tiny rocky island (just 250 metres long and 120 metres wide) three miles off of the west coast of Sweden, which has a 19th-century lighthouse and a newly opened nine-bed hotel.

For more than 150 years, the lighthouse guided sailors through the hazardous waters that shipwrecked 900 boats before its construction in 1868. 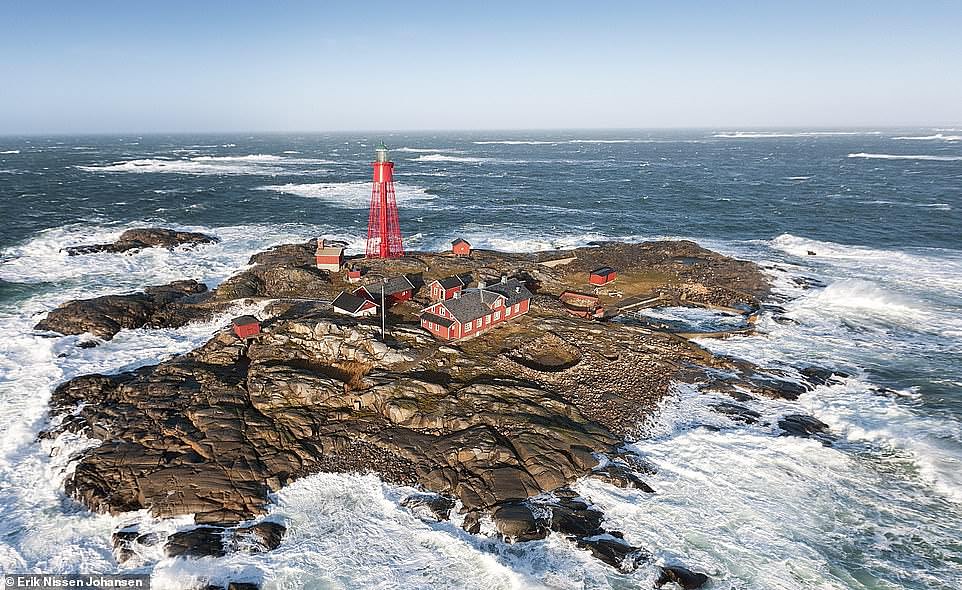 Pater Noster’s lighthouse was decommissioned in 1977, leaving the island deserted for several decades 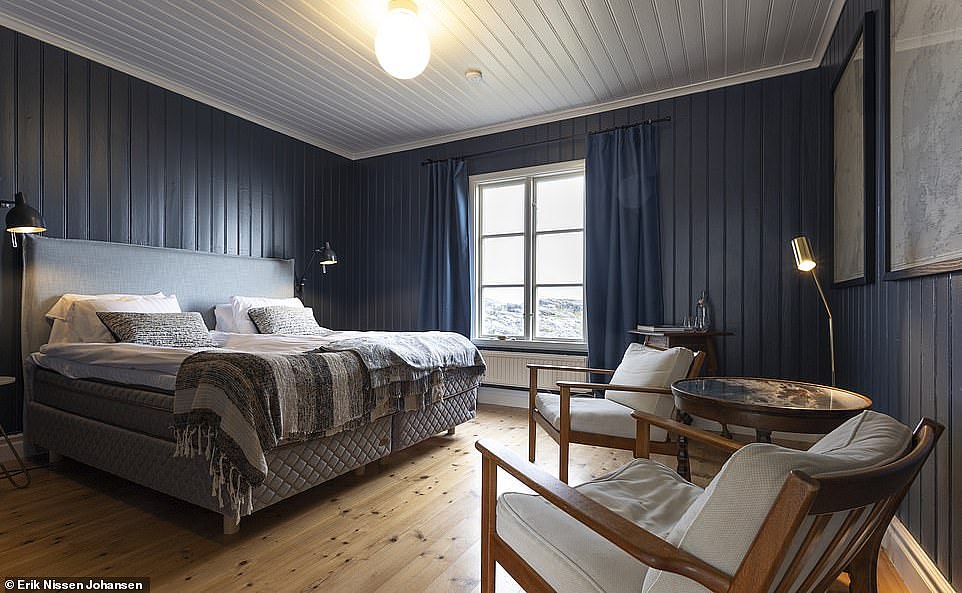 The hotel on Pater Noster opened in the summer of 2020. Above is one of the stylish guest rooms 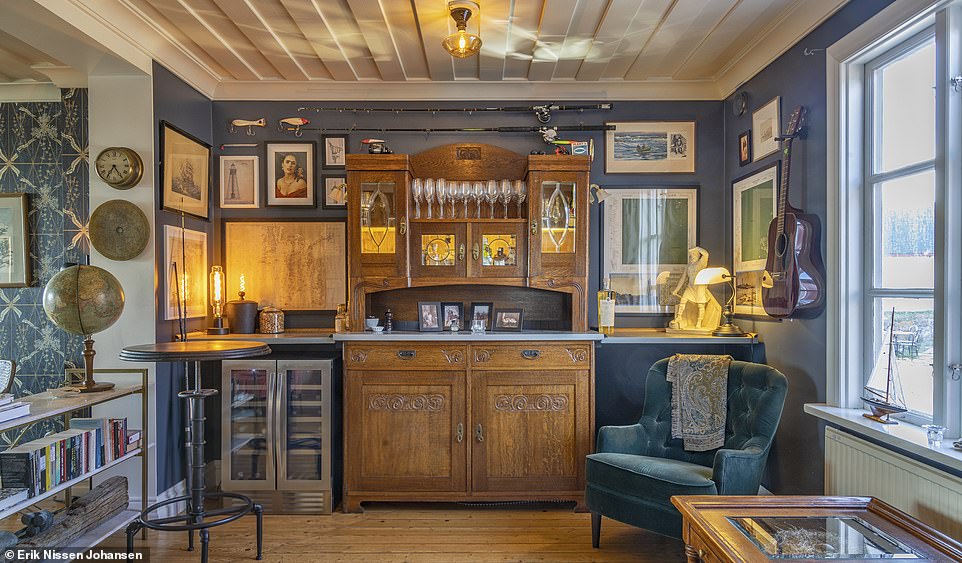 Most guests journey to the island for ‘one night to play in splendid isolation’, says Harriet 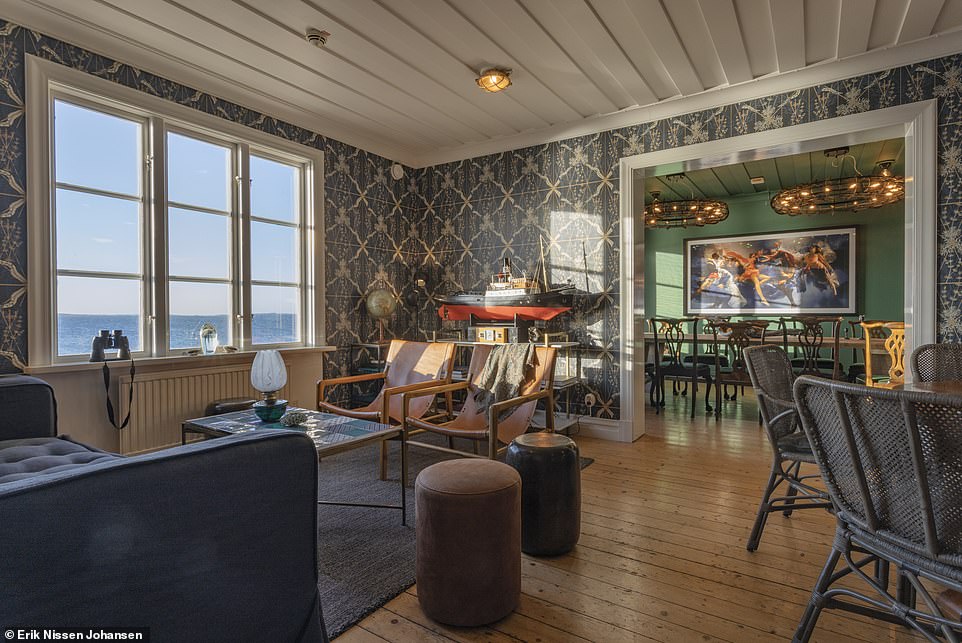 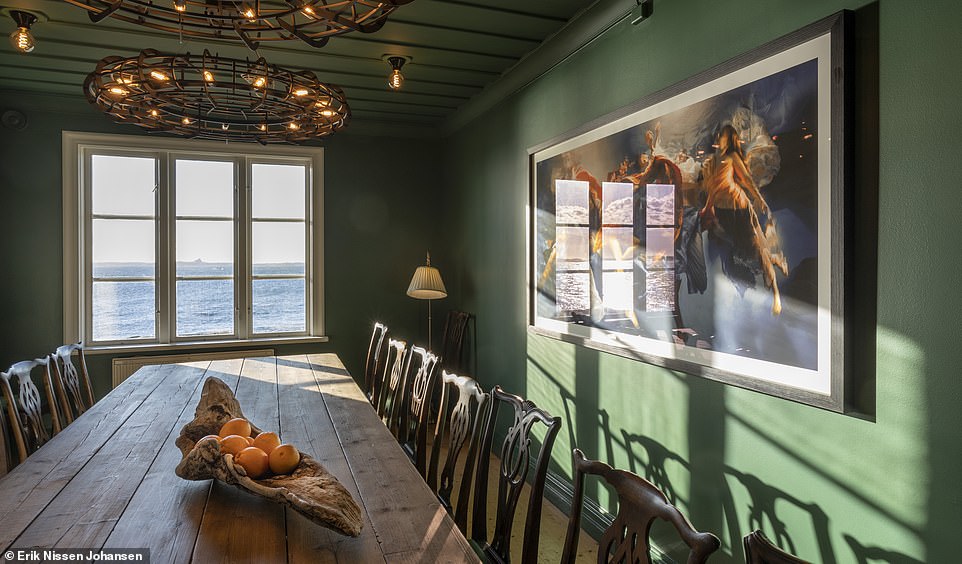 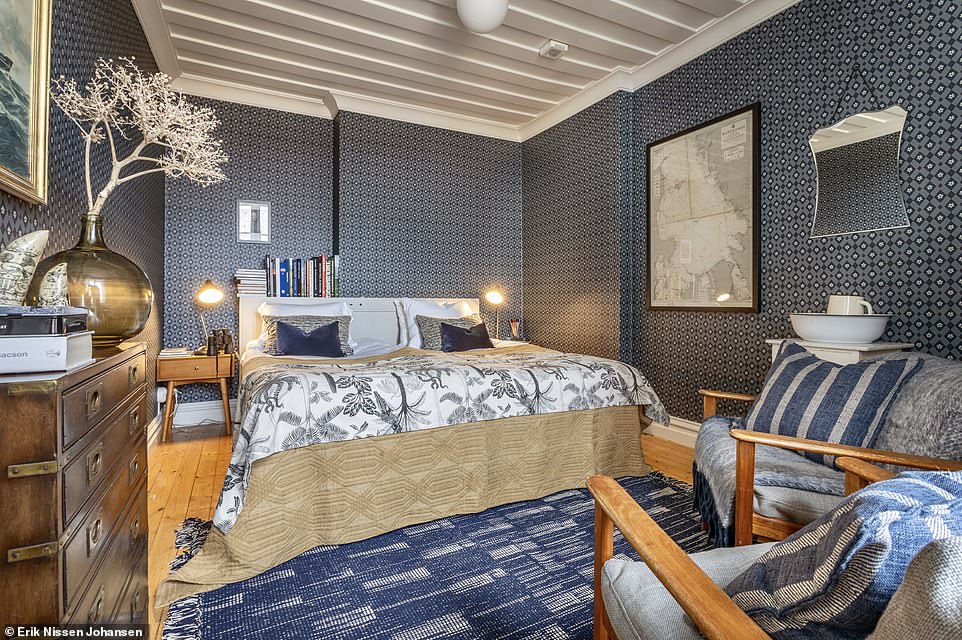 Harriet and her friend are the only Britons on the island during their stay – all other guests are Swedish. ‘It’s a joy being holed up on an island with six exceptionally friendly natives,’ she says 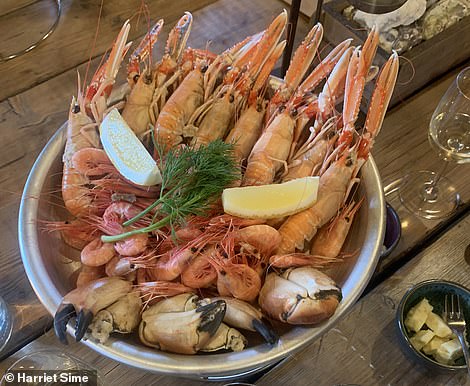 All the lighthouse master and his staff had was the sea; their lives were dictated by the storms and the wind that threw salt spray more than 80 ft into the air, often leaving them stranded for months on end.

The families survived on a diet of seals, crab and boiled seawater; the salty, windswept terrain too tough to keep livestock or grow anything.

The lighthouse was decommissioned in 1977, leaving the island deserted until a group of local entrepreneurs signed a lease contract with the government and opened what is now one of Sweden’s best boutique hotels in the summer of 2020.

Most guests, like us, come for one night to play in splendid isolation. Brisk, icy swims in the seven-degree ocean are followed by steamy dips in the salt-water hot tubs which look out towards Denmark.

We dine communally in the old wooden boathouse strung with bright orange fishing waders and sleep in the red clapboard main house, which was once home to the lighthouse master, keeper, servant and their families.

It’s a joy being holed up on an island with six exceptionally friendly natives. 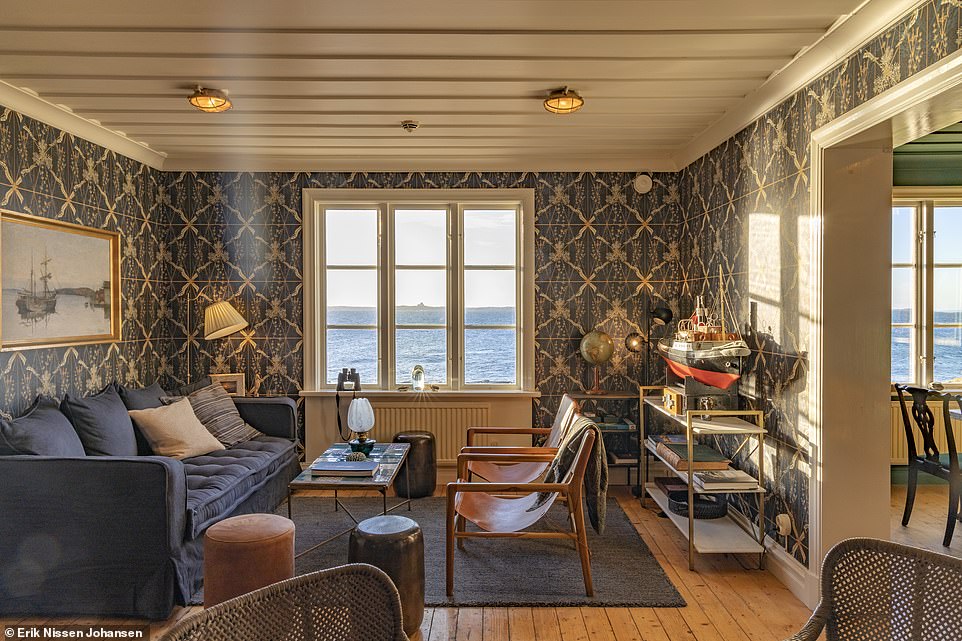 The original inhabitants at the lighthouse ‘survived on a diet of seals, crab and boiled seawater’, but now the hotel offers more comfort, with plush interiors and delicious local delicacies 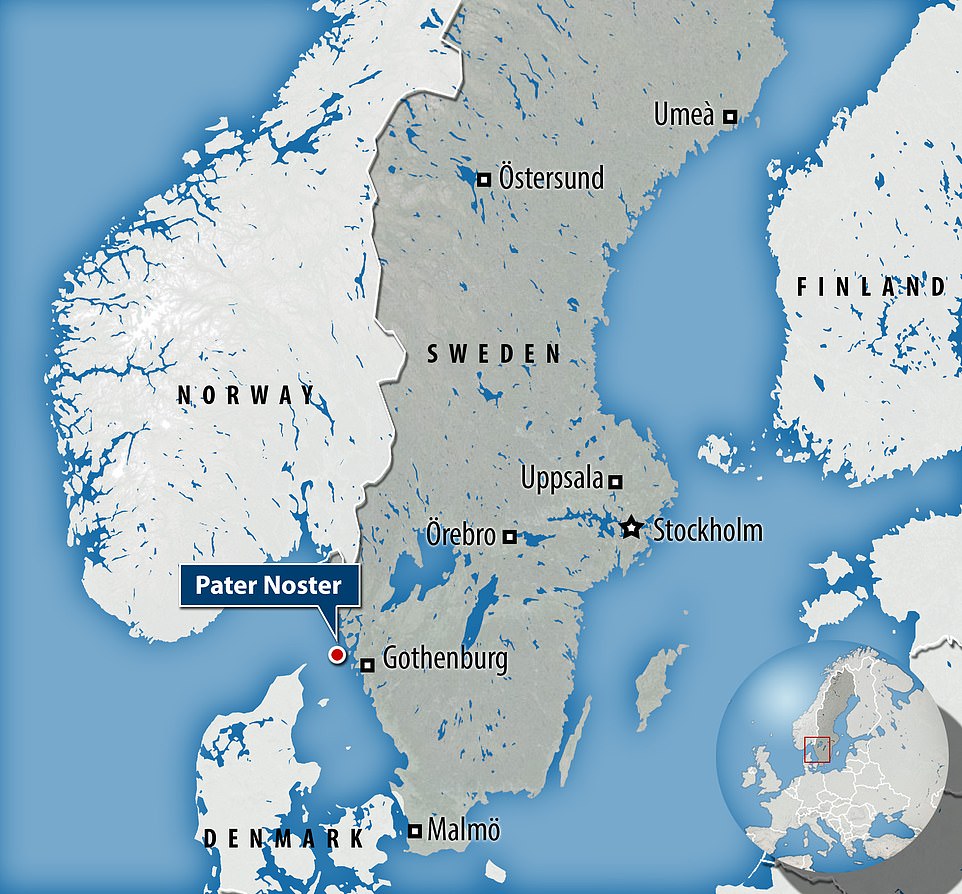 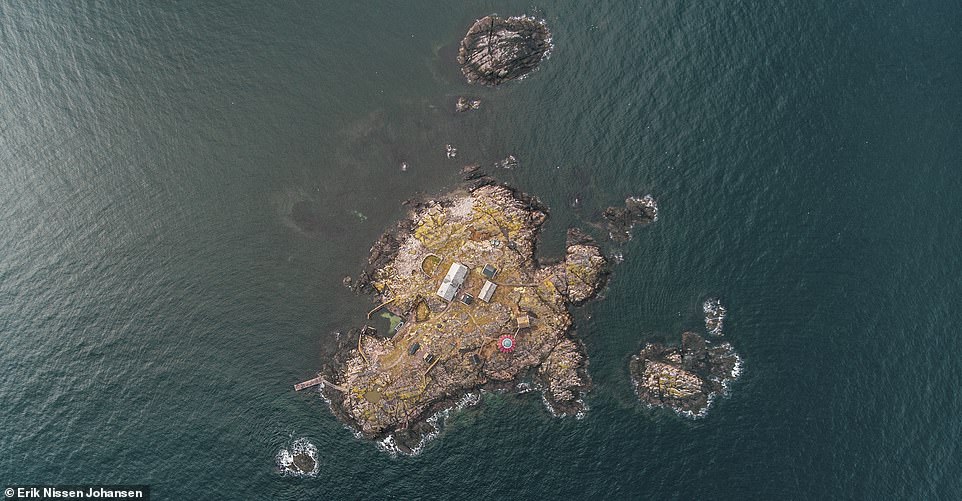 For over 150 years, the lighthouse guided sailors through the hazardous waters that shipwrecked 900 boats

Over a four-course dinner, we swap stories and learn how Swedes love coffee (10 cups a day is the norm for some), how every other Swedish family has a boat and how their obsession with cinnamon buns is genuine (one guest brought a bagful with her).

Anders — one of the entrepreneurs (they make sure there is always one of them on the island) — dishes out the flowery Riesling, lighthouse stories and seafood with passion, beginning with delicious deep-fried bright green seaweed that the chef picked on the island just minutes earlier.

As the sun drops and the sky turns pink, the boy with bright red hair appears playing a violin. We sit in silence, with only the wind interrupting his stirring performance. Some on the table are reduced to tears.

Anders tells us how he practises in the lighthouse during his breaks, but only plays to guests when he feels like it.

‘He likes us, we’re a good group,’ says one woman. We smile and nod in contented silence. 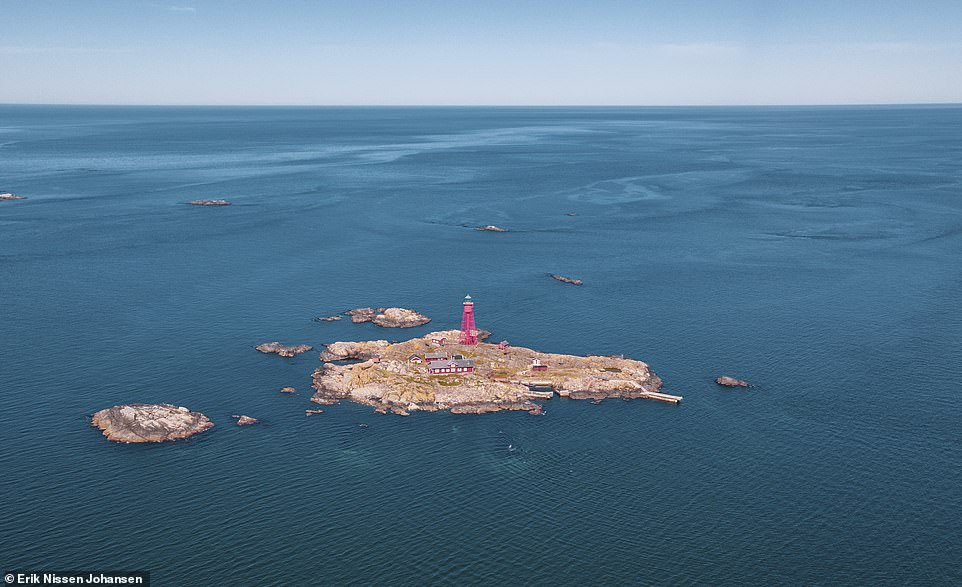 During Harriet’s stay, one of the entrepreneurs that runs the island’s hotel dishes out ‘lighthouse stories and seafood with passion’ 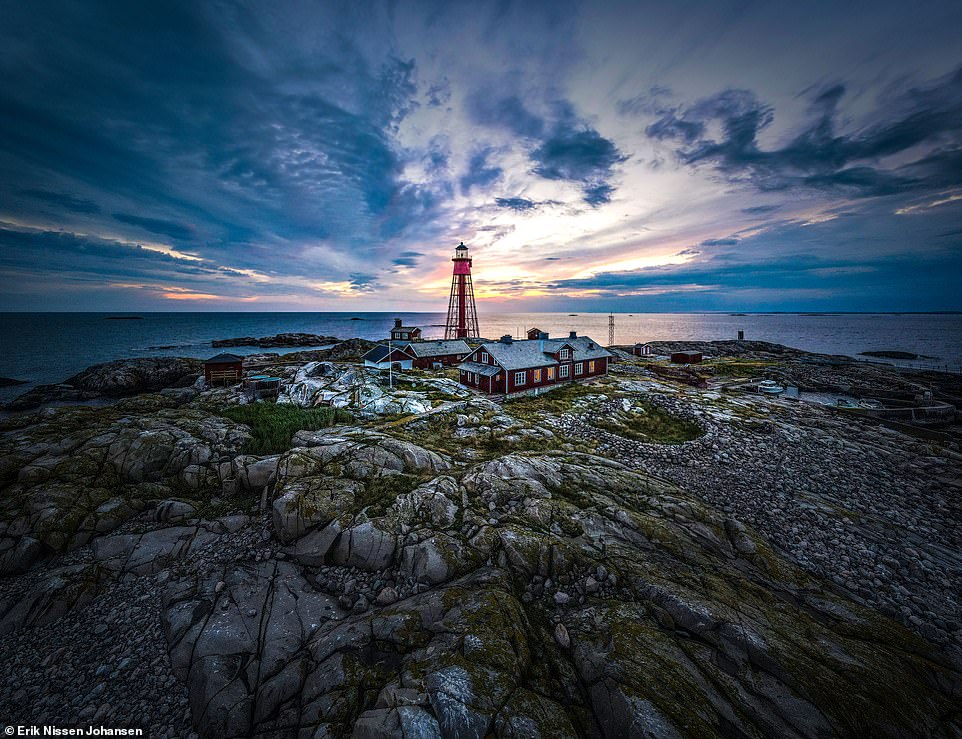 ‘Brisk, icy swims in the seven-degree ocean are followed by steamy dips in the salt-water hot tubs,’ writes Harriet 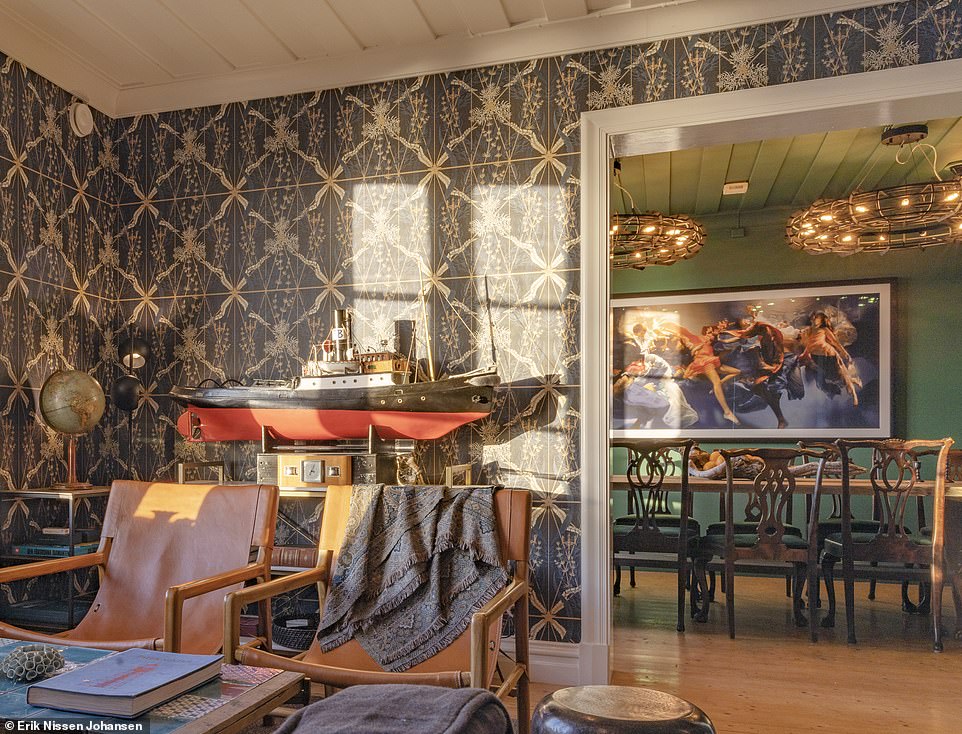 The next morning, we reluctantly say goodbye and join the short boat ride back to the mainland, passing dozens of chubby seals sunbathing on a nearby tiny island.

The 40-minute drive to Gothenburg takes us through the pretty archipelagos; the red and yellow clapboard homes appearing with more regularity on the green, flat landscape until we reach the city’s cobbled centre.

We’re determined to experience ‘fika’ — a tradition in which Swedes catch up with friends over coffee and cake — so we swiftly head to Haga, the city’s old boho district. Thrift shops and leather stores pop up on every corner and doughy cinnamon buns the size of our heads lure in weary shoppers.

The afternoon is spent exploring, stopping for cake and coffee that turns into Aperol Spritz and then wine with salted almonds at one of the many trendy bars.

The city (population 500,000) is best explored on foot but, for tired legs, historic blue trams rattle along the streets and past the pretty canals and parks with precise regularity (Gothenburg has the largest tram network in Northern Europe). 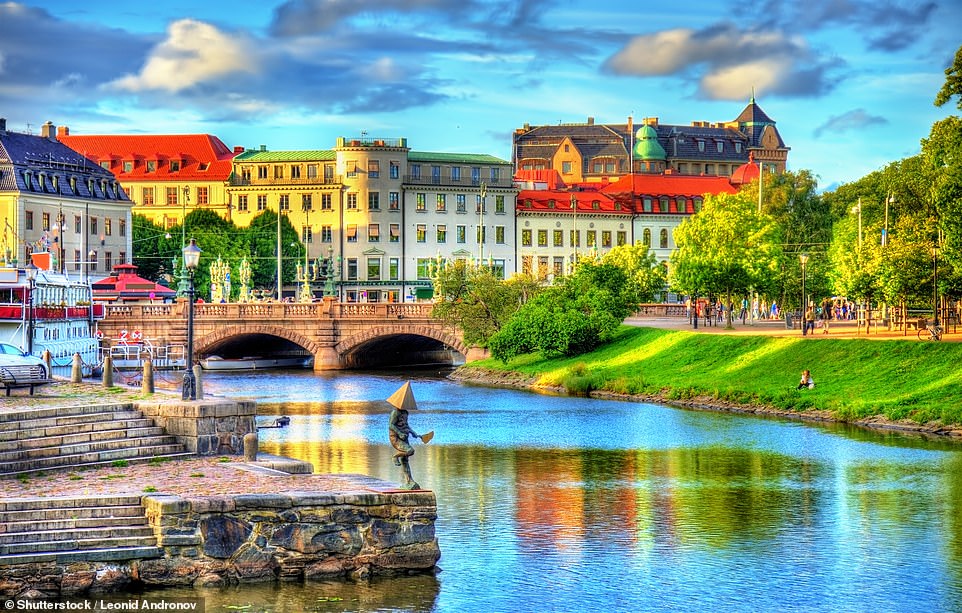 After leaving Pater Noster behind, Harriet goes on to explore Gothenburg (above) 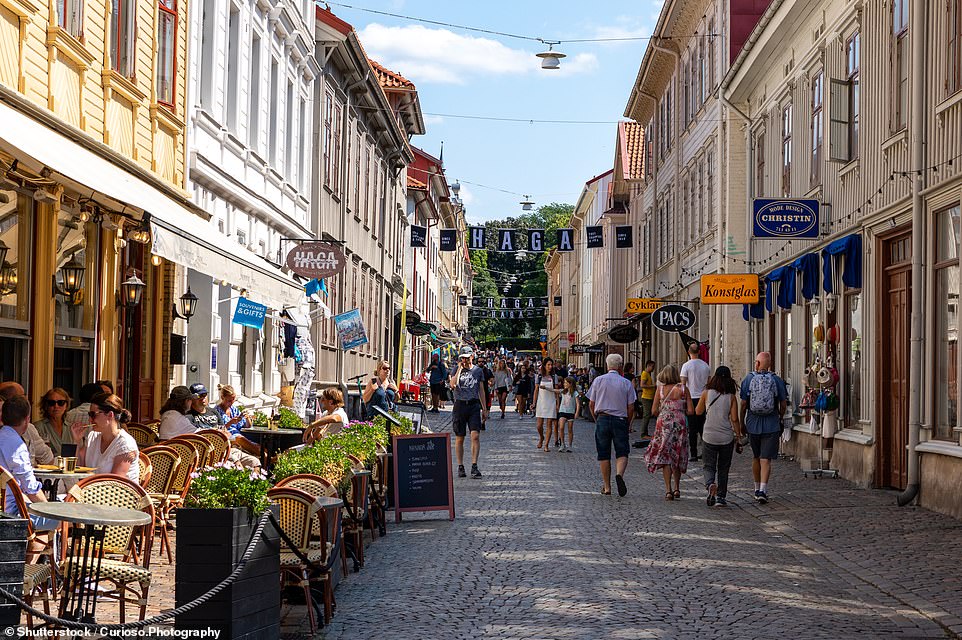 While in Gothenburg, Harriet takes a walk through the Haga district (above), where she finds thrift shops, leather stores and ‘doughy cinnamon buns the size of our heads’

Seafood is serious business in Sweden’s second city, too, thanks to the frosty, salty west coast, which is packed with shellfish.

On our last evening, we take the tram to Brasserie Lavette, a seafood and grill restaurant in the south of the city. We almost order the crayfish so we can show off our new shell-bashing skills.

But instead, we choose to reminisce over fish gratin, steak and chablis and take that precious memory away with us.