An ovarian cancer survivor who was diagnosed months after her husband was told he had bowel cancer has called for greater awareness of the disease’s symptoms at a charity demonstration in Westminster.

Diane Boothby, 64, of Downham Market, Norfolk, was diagnosed with ovarian cancer after paying for a private scan just five months after her husband Paul, 69, was told he had bowel cancer.

The couple, who wed in November 1978, were determined to fight the disease and see their 43rd anniversary together – and recently learned they are both in remission.

However Diane, who has undergone a hysterectomy, now wants to build up a better awareness for other women who could be living with the ‘silent killer’.

The ex-theatre hand joined scores of other women from across the UK to campaign outside of Number 10 Downing Street last month prior to a meeting with MP Sharon Hodgson at the House of Lords.

Diane told FEMAIL she had even received a letter from an IBS ‘coach’ charging up to £1,000 for her services and said ‘many in the community had shelled out’ for such services, believing they could offer a cure. 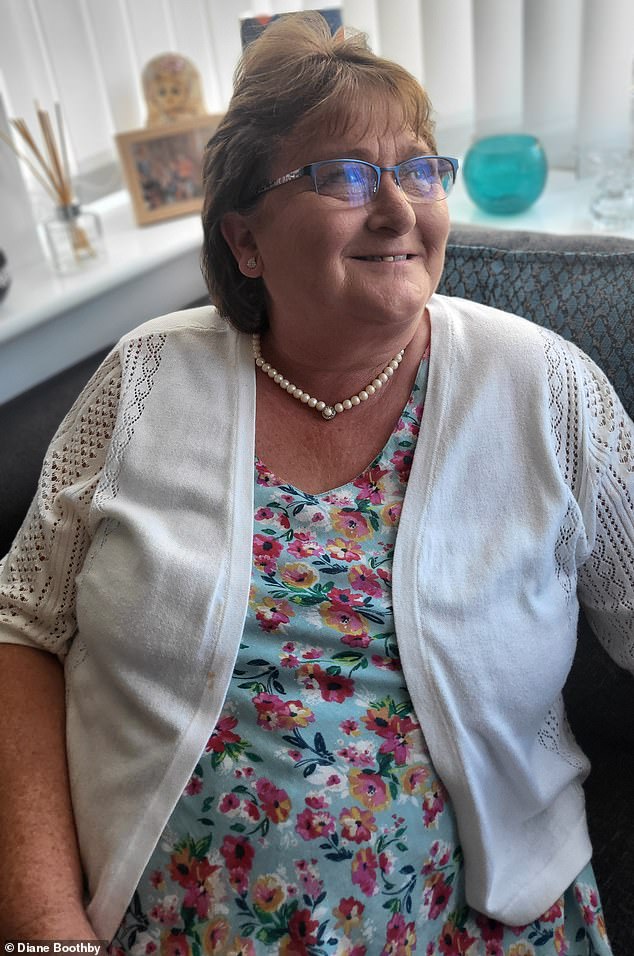 Diane Boothby, 64, of Downham Market, Norfolk,  who was diagnosed months after her husband was told he had bowel cancer has called for greater awareness of the disease’s symptoms at a charity demonstration in Westminster 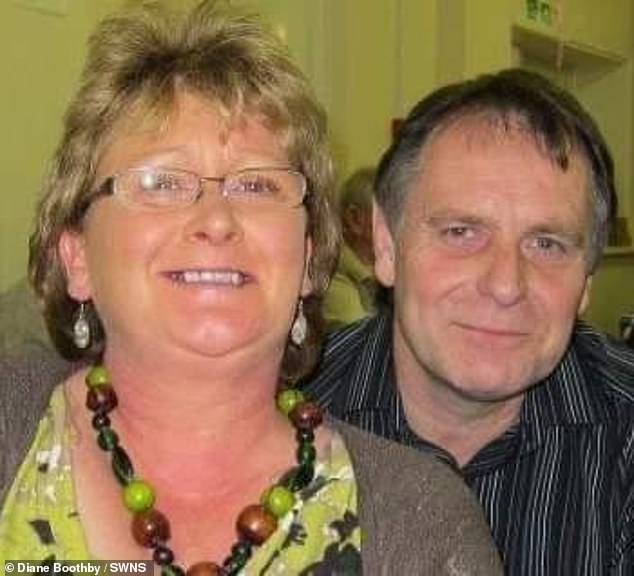 The couple, who wed in November 1978, were determined to fight the disease and see their 43rd anniversary together – and recently learned they are both in remission 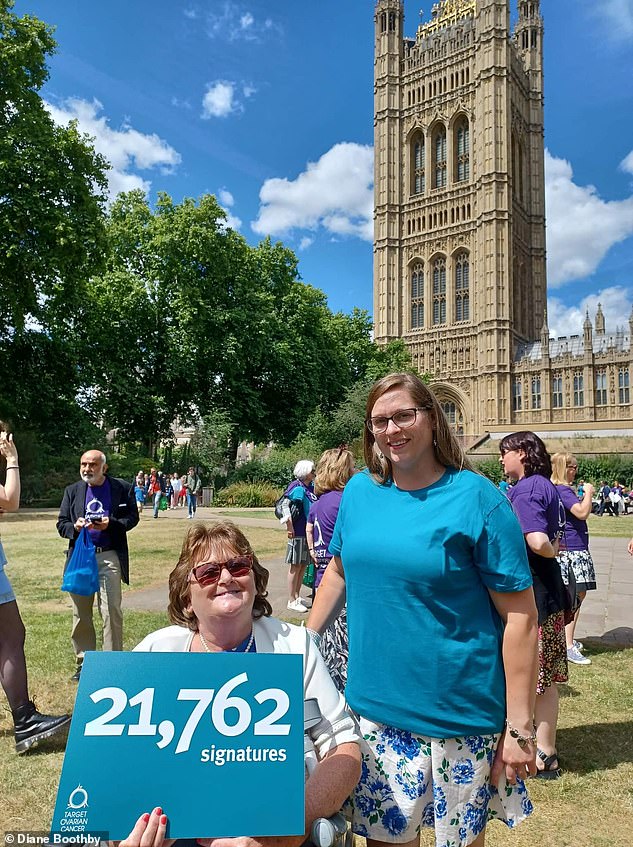 Diane made headlines earlier this year when it emerged she had been diagnosed months after her husband.

Paul had been diagnosed in August 2021 after a routine check-up showed he had stage three bowel cancer — the final stage before it spreads around the body.

‘You have to push how you’re feeling to get diagnosed — if I’d left it and left it, who knows what could have happened.’ 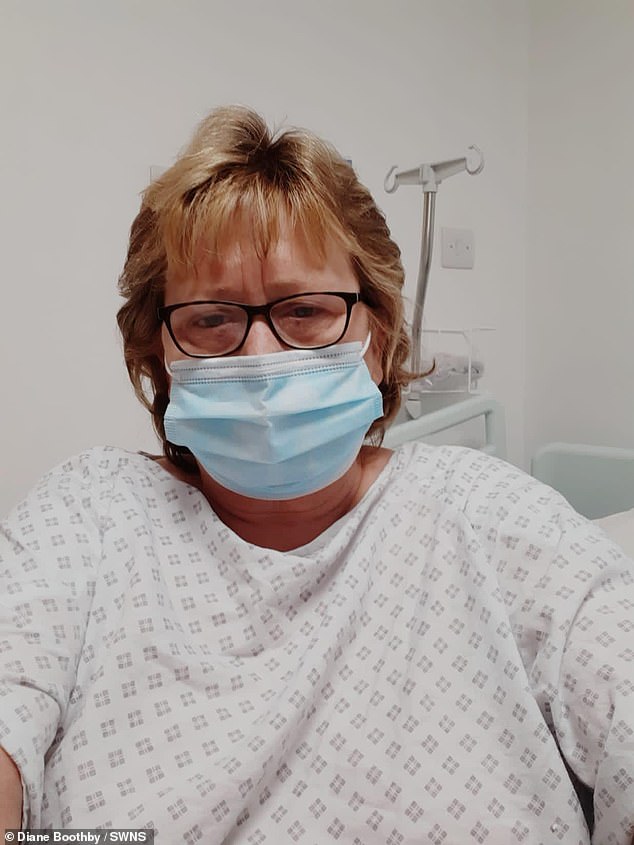 Diane, who underwent surgery to have her ovaries removed, wants better awareness for other women who could be living with the ‘silent killer’. Pictured, in hospital

She added: ‘We’ve been married forty three years and haven’t celebrated our last wedding anniversary yet — we’ve still got lots to celebrate.’

Paul underwent surgery to remove part of his bowel in September 2021 and began chemotherapy to remove any remaining tumours.

Despite fighting his own battle, he pushed his wife to get tested privately, worried that she would have to go through something similar.

Paul had been feeling more tired than usual but didn’t think he was suffering from a stage three cancer.

It was the surprise of the diagnosis that led him to convince his wife, who had in fact been struggling with health problems for some time, to get tested as well. 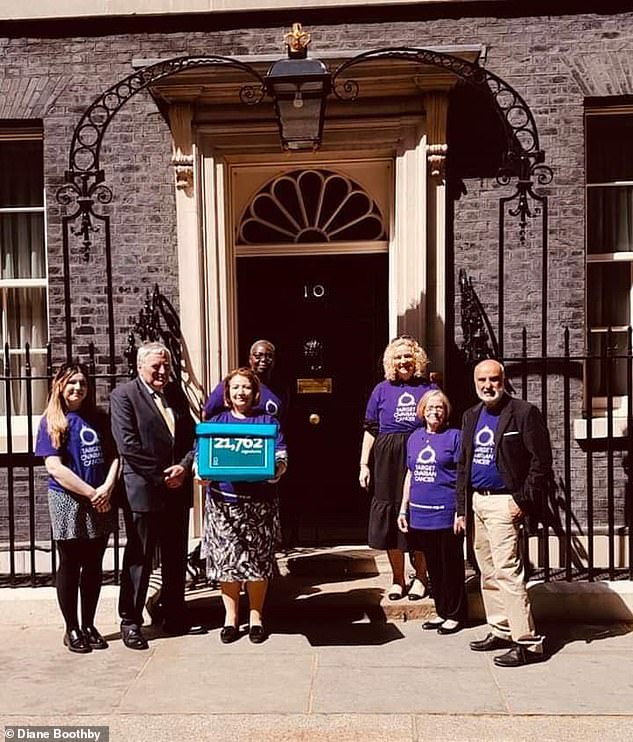 Volunteers from Target Ovarian Cancer outside Number 10 Downing street, some had travelled on the overnight bus from Scotland to take part

She was eventually diagnosed with cancerous ovarian cysts this January after struggling with severe bloating which had been misdiagnosed.

Now, she has joined campaigners from charity Target Ovarian in saying there is an ‘awareness crisis’ with the disease, and many women are instead referred for symptoms such as IBS or bladder problems.

Symptoms such as bloating, feeling full more quickly and a change in bowel habits can all be symptoms of ovarian cancer.

Diane said she even had a letter from an IBS ‘coach’ charging up to £1,000 for treatment.

After hearing Diane’s diagnosis, they replied: ‘Sadly, your gut had been warning you for years to do something to heal and fix it and as 70 per cent of your immune system is located within your gut and your gut was weakened by your IBS and diverticulitis, your immune system could no longer hold back cancer cells forming and growing. 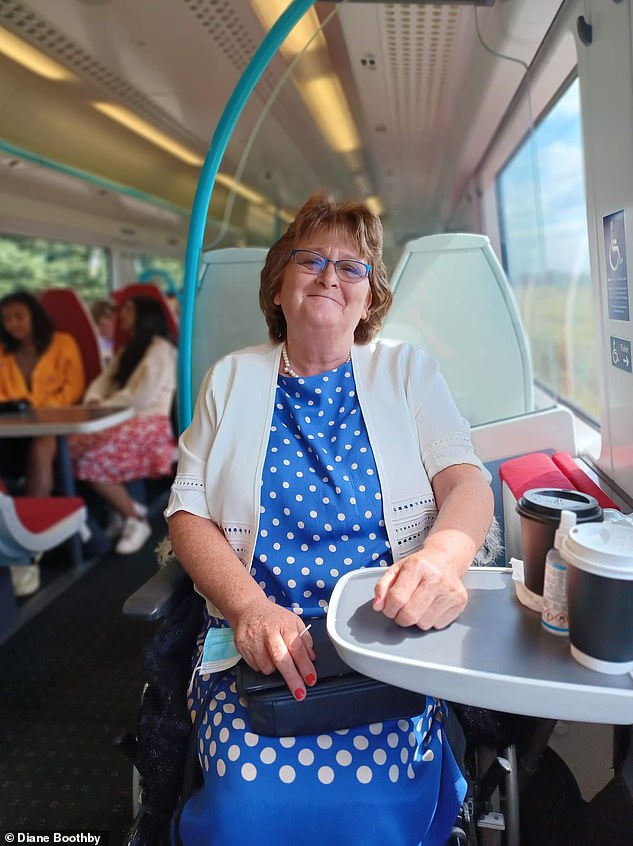 Diane called the coach ‘ignorant’ but said that many in the ovarian cancer community have shelled out for such services, believing them to be the route to a cure

‘That is what our immune system does every second of every day. It prevents cancer cells from growing and flourishing. A weakened immune system simply cannot hold cancer at bay forever. I’m sorry to hear of your news.’

WHAT IS BOWEL CANCER?

Bowel, or colorectal, cancer affects the large bowel, which is made up of the colon and rectum.

More than nine out of 10 people with stage one bowel cancer survive five years or more after their diagnosis.

This drops significantly if it is diagnosed in later stages.

According to Bowel Cancer UK figures, more than 41,200 people are diagnosed with bowel cancer every year in the UK.

It affects around 40 per 100,000 adults per year in the US, according to the National Cancer Institute.

Diane called the coach ‘ignorant’ but said that many in the ovarian cancer community have shelled out for such services, believing them to be the route to a cure.

She said: ‘I didn’t respond to that, it’s ignorant.

‘Cancer happens every day to all sorts of people and can’t simply be explained away by gut health or a weakened immune system.

‘Sadly I’ve seen women spend a lot of money on these coaches and experts due to a lack of awareness about the reality of the disease.

‘Everyone can do what they feel is best but the charities are working round the clock to let people know that an ovarian scan is the best way forward.

‘I underwent surgery to remove my ovaries, which has left me with a scar – that I have no issue showing off because I want to make people aware of how serious this is.

‘Look at the size of it and see the gravity of the situation.

‘This is something that affects young women more – please get a scan, it could save your life.’

She continued: ‘I’m shocked at the amount of people who don’t know that the smear test doesn’t cover them for ovarian cancer.

‘So many women I’ve spoken to across the UK are under the impression the smear covers them for the ovaries too – this isn’t the case, it is just the cervix.

‘As someone who worked in the medical practice, I’m aware of this, but not everyone has that privilege – this information could save so many lives.

‘They call this disease the silent killer, as many women put down the symptoms to PMS or IBS.’

The group penned an open letter to the government with 21,762 signatures that read: ‘There is an awareness crisis in ovarian cancer. 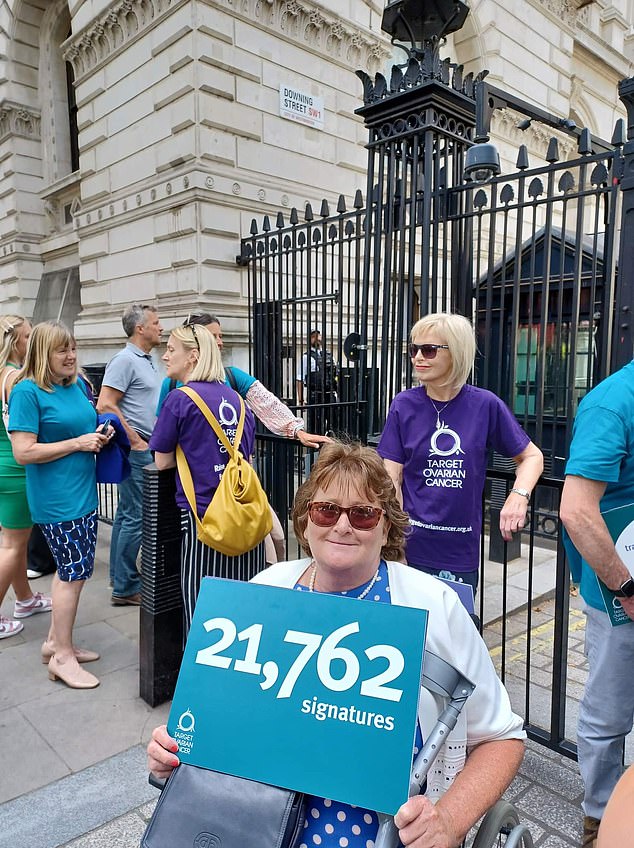 Campaigners met with MP Sharon Hodgson who encouraged them to ‘spread the word’ around the UK after a meeting at the House of Lords. Pictured, Mrs Boothby outside Downing Street

WHAT IS OVARIAN CANCER AND WHAT ARE ITS SYMPTOMS?

Ovarian cancer is a cancer of the ovaries, which are part of the female reproductive system that contain their eggs. There are two ovaries and both are attached to the womb. Cancer on the ovaries can spread to the nearby bowel and bladder.

It is the eighth most common cancer among women, and is most common in women who have had the menopause but it can affect women of any age.

About 66 per cent of ovarian cancer cases are diagnosed in the more advanced stages of the disease.

At the time of diagnosis, 60 per cent of ovarian cancers will have already spread to other parts of the body, bringing the five-year survival rate down to 30 per cent from 90 per cent in the earliest stage.

It’s diagnosed so late because its location in the pelvis means the symptoms can be vague and difficult to recognise, particularly early on.

They’re often the same as symptoms of less serious conditions, such as irritable bowel syndrome (IBS) or pre-menstrual syndrome (PMS).

The most common symptoms of ovarian cancer are:

See your GP if:

You have other symptoms of ovarian cancer that won’t go away – especially if you’re over 50 or have a family history of ovarian or breast cancer, as you may be at a higher risk

‘With no viable screening tool, it is vital that everyone is aware of the symptoms if more are to be diagnosed early.

‘Ovarian cancer is much more treatable when it is caught early. But right now, two thirds are diagnosed late.

‘New data from Target Ovarian Cancer has highlighted the severity of the situation in England. Only 21 per cent of women are able to name bloating as a symptom, 32 per cent abdominal pain, 2 per cent feeling full and just one percent urinary urgency.

‘NHS England’s inclusion of abdominal symptoms in the ‘Help Us Help You’ campaign is a positive step. But much more needs to be done to tackle this crisis.

‘We need to see the current diagnostic pathway for ovarian cancer shortened. Ovarian cancer is diagnosed with a CA125 blood test and an ultrasound, however these tests are carried out separately leading to a longer wait time for diagnosis.

Sharon Hodgson, Labour MP for Washington and Sunderland West, urged the group to ‘spread the word’ about the little known symptoms of ovarian cancer in their own towns.

Lily James, her rocker boyfriend and mum go house hunting in an area where homes cost up £5 MILLION