A 28-year-old ‘beautiful’ and ‘lovely’ council worker who was shot dead in the back garden of her own home has been pictured for the first time as tributes poured in.

Council worker Ashley Dale was gunned down outside the property in the Old Swan area of Liverpool shortly after midnight yesterday. No arrests have yet been made.

Thugs are thought to have burst through the door of her £70,000 three-bedroom terraced home, where she ‘lived largely on her own’, and sprayed bullets inside.

Police were called by concerned neighbours reporting the sound of what they thought were gunshots or fireworks, and officers found Miss Dale in the back garden.

Merseyside Police believe the property was purposefully targeted, but Miss Dale was not the intended victim. She was treated at the scene but died later in hospital.

It comes seven years after her own brother Lewis Dunne was shot dead aged 16 by a gang who mistook him for a rival, although her death is said to be unrelated to this.

Tributes were posted for Knowsley Council employee Miss Dale today, including from her former colleague Carol Tunstall who wrote on social media: ‘So very sad. Ashley worked with us a good few years back. Such a beautiful, lovely young girl.’ 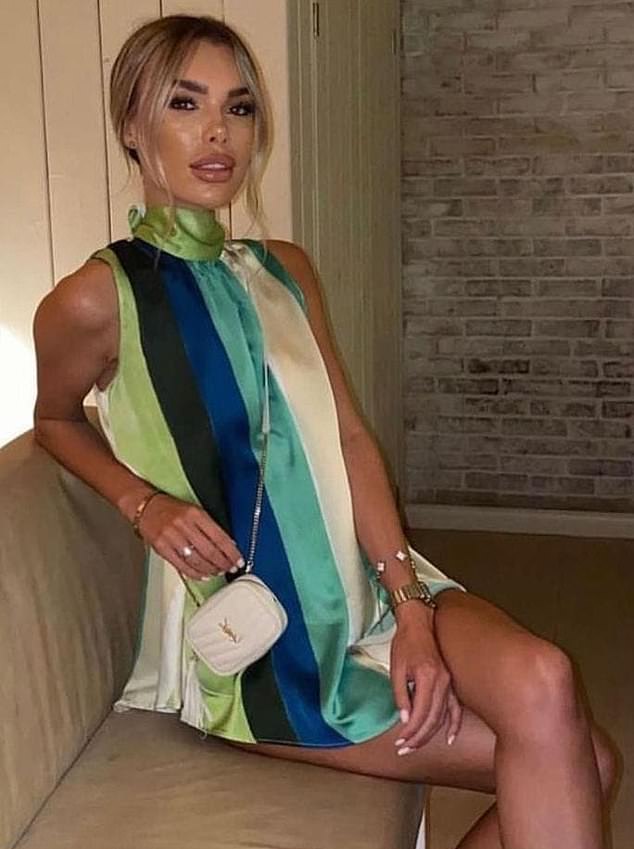 Ashley Dale, 28, was gunned down in the back garden of a house in Liverpool yesterday

And a friend, Saraphina Kingfisher, said on Facebook: ‘Ashley was one of the most caring, friendly people I’ve met. Such a heart of gold. Rest in paradise, beautiful.’

Family friend Danielle O’Mahoney added: ‘My heart is broken for you and all your family, Julie Dale. You are in my thoughts. Sending you all the love and strength.’

Officers said they were called just after 12.40am yesterday to a house on Leinster Road and found her with injuries to her body consistent with gunshot wounds.

Miss Dale was pronounced dead in hospital. Police said her next of kin had been informed and were being supported by specially trained officers.

Detective Chief Superintendent Mark Kameen, head of investigations at Merseyside Police, said officers believe at this stage that Miss Dale was home alone at the time. 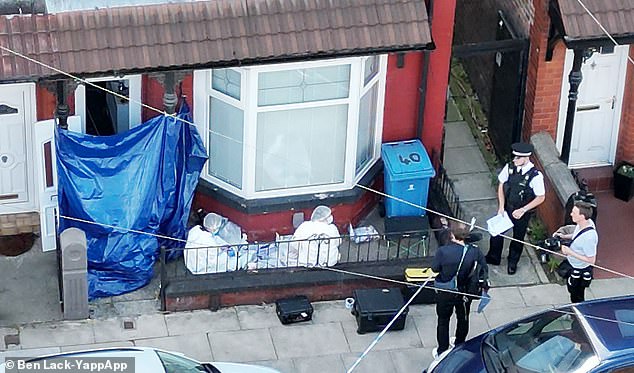 Police forensic officers at the scene of shooting in Liverpool yesterday

He told the Liverpool Echo: ‘Ashley lived there largely on her own, and what we know at this time is that the front door of that property was forced open by the offender or offenders outside. A firearm was then indiscriminately discharged on multiple occasions inside. 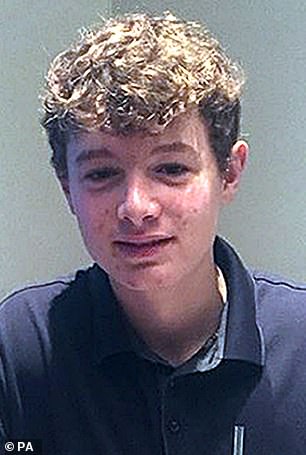 Miss Dale’s brother Lewis Dunne was shot dead aged 16 by a gang who mistook him for a rival, but her death is said to be unrelated

‘Ashley was inside, exactly where she should be, enjoying her Saturday evening and Sunday morning, and she was hit by one of those shots. That proved fatal despite the very best efforts of Merseyside Police and then the North West Ambulance Service.’

The type of gun used is not yet known, but police have confirmed it was not a shotgun type firearm. Bullet casings from the scene have been sent for examination.

When asked why the force believed the address was targeted, Mr Kameen said: ‘It’s very early stages of the investigation as I am sure everyone can appreciate.

‘At this moment in time our position is we do not believe Ashley was the target of this attack. Ashley worked for Knowsley Council, she had recently had a promotion, she had graduated, she had her whole career in front of her, and her whole life in front of her. She was a young, innocent woman enjoying her life.

‘So we do not believe, at this time, that Ashley was in any way involved in this. We believe the property was being targeted. And the reasons for that are part of our investigation now as we move forward.’

Detectives have launched a murder investigation with inquiries being carried out, and a post-mortem examination is due to take place to confirm the cause of death. 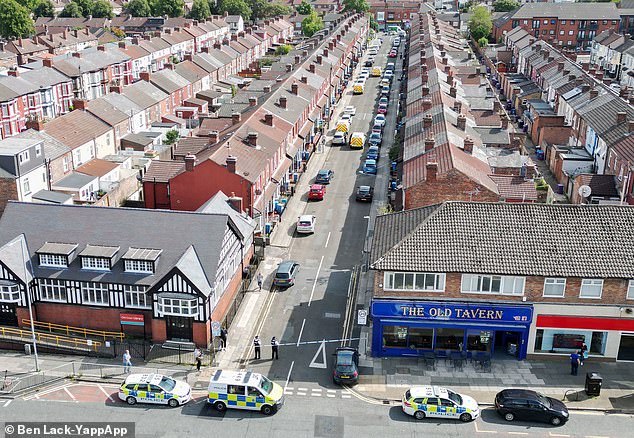 Police have appealed for information about a car seen being driven ‘erratically’ on Prescot Road around the time of the shooting.

Miss Dale is the first female victim of gun crime in Liverpool since the murder of Lucy Hargreaves in August 2005 when three men burst into a house and shot her dead.

Mr Kameen also told BBC North West today: ‘I want our communities to have a sense of utter disgust, revulsion and shock at this terribly tragic murder, senseless murder, of an innocent 28-year-old woman in her own home.

‘We must come together – the police, the communities, the Press itself, to make sure that the people that are responsible for this are identified as quickly as possible.’

In a statement yesterday, DCI Kameen also said: ‘This clearly was a very shocking incident which has led to the death of a young woman. 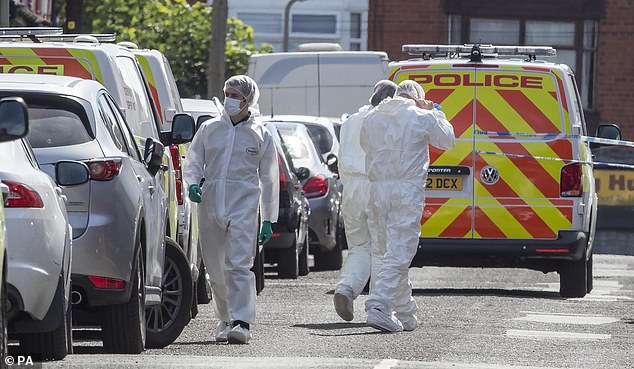 ‘I understand how frightening incidents like this can seem to ordinary members of the public and in the coming hours and days we will be speaking to people living in the local and wider community to reassure them of the ongoing work we are doing to find the person or people responsible.

‘Gun crime has no place on the streets of Merseyside and we will leave no stone unturned to bring those responsible to justice.

‘An investigation is under way and a number of lines of inquiry are currently being investigated.

‘The community, as always, are our eyes and ears and we know that there may be people living locally who saw or heard something in the early hours which may prove to be significant to our investigation. 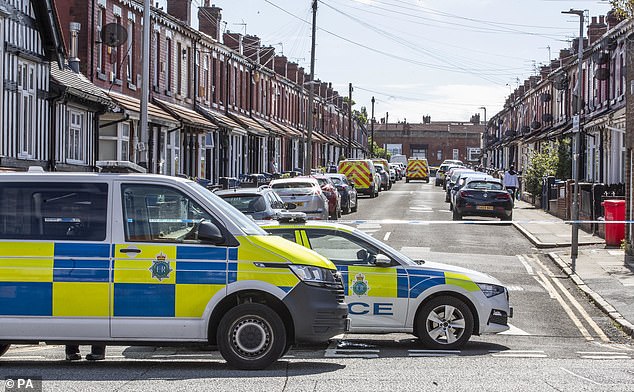 ‘I would urge those people to please come forward and tell us what they know. If you live or work locally and have private CCTV or a Ring doorbell please check it to see if it captured anything which may assist us.

‘Similarly I would ask taxi and delivery drivers if they were driving in the area to check their dashcam footage. We are particularly keen to find anyone who saw a vehicle being driven erratically in the area around Prescot Road.’

Lewis was on his way to a shop on a canal towpath in Vauxhall, Liverpool, when he walked into the path of four men lying in wait with a loaded weapon in 2015.

The shooting followed a series of incidents between two groups which involved the deliberate ramming of vehicles, chases and violence on the streets of the city.

Anyone with any information or video can share this with police by clicking here, or contact the force via 101 or social media @MerPolCC. People can also call Crimestoppers anonymously on 0800 555 111, quoting reference 22000615873

Give this town a medal: A visit to the winning Shropshire spot that inspired the modern Olympics