A pitch invader who streaked across Adelaide Oval during the Power’s big win over the Crows last weekend is selling his shoes for $500 with a very cheeky online ad.

The epic game was five-time Showdown Medal winner Robbie Gray’s last ever in the AFL – so the prankster who ran on the park believes his footwear is a piece of history.

The advertisment that appeared on Facebook Marketplace under the name ‘Jezza Bell’ is titled: ‘The shoes that ran on Adelaide Oval Saturday Night Robbie Gary’s Last game’. 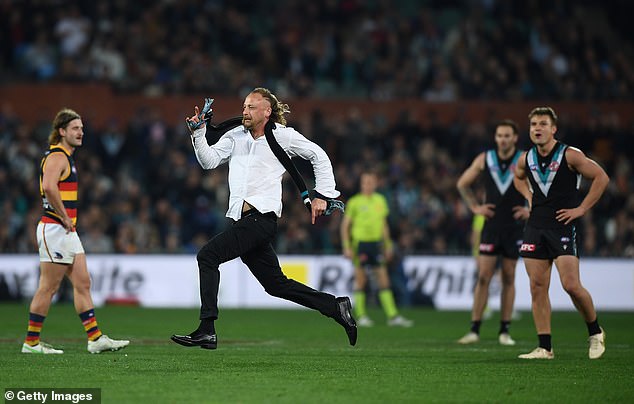 The pitch invader at the Adelaide Oval during the Port vs Crows clash. 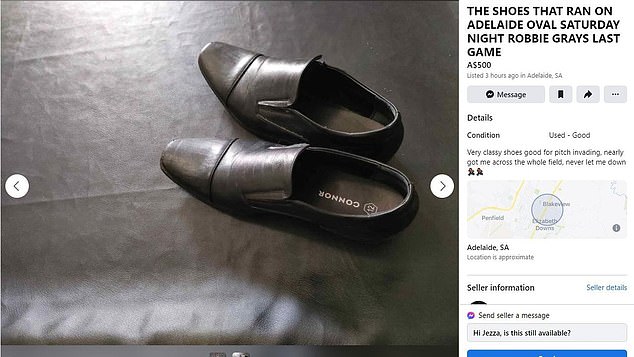 An advertisment on Facebook Marketplace selling the shoes claiming to have been worn during the pitch invasion on Adelaide Oval.

The ad describes the shoes – which normally retail for $60 – as ‘good for pitch invading’ and says they ‘nearly got me across the whole field never let me down’.

Despite being used to run on the pitch, the black business loafers appear to be clean and un-scuffed.

The pitch invader – one of five people arrested during the game – wore the shoes he advertised on Facebook Marketplace when he ran onto the field 16 minutes from the full-time siren. 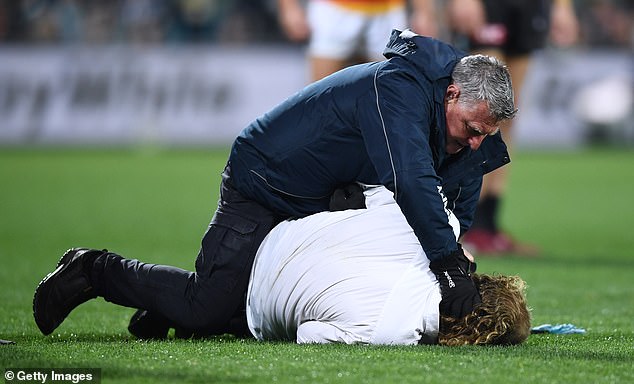 The 34-year-old man from Smithfield was arrested after being tackled. He will now face court and a ban from Adelaide Oval

He managed to run more than 100 metres across the ground and avoid multiple security guards before he  was eventually tackled.

A 34-year-old man from Smithfield has been charged over the incident and will face the Adelaide Magistrates Court in October and could cop a ban from Adelaide Oval.

The game itself was a heated affair with the Power putting on an absolute clinic, defeating their rivals by 56 points.

Gray called time on his impressive 16-year career, but wound back the clock to kick two goals and set up four more. 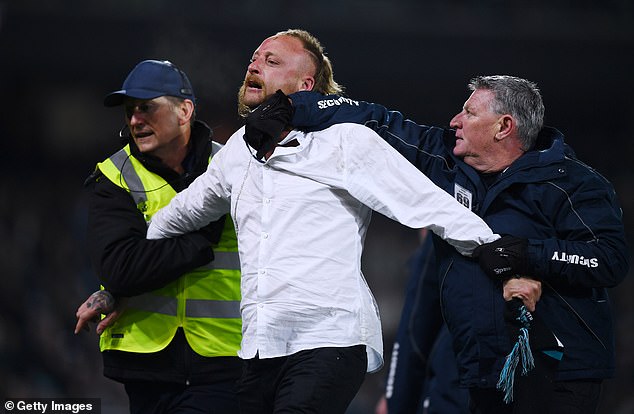 The pitch invader is led from the oval by security. He was one of five people arrested on the night.

The veteran had the 50,000-plus crowd at Adelaide Oval chanting his name late in the game, but selflessly choose to let a teammate score when he had his final shot on goal.

Before the match, Port Adelaide star Ollie Wines had a sensational crack at the Crows, blasting the ‘DNA of the club’ and ‘their sense of entitlement’.

Power coach Chad Cornes also said he ‘hated them as a footy club’ while defender Darcy Byrne-Jones put it simply: ‘I don’t really like their club.’

Dramatic moment 130ft superyacht sinks off the coast of Italy