ALTHOUGH she’s married to Paddy Kirk, Chas Dingle has found comfort in another man.

The Emmerdale pub manager played by Lucy Pargeter makes a shocking decision about her love affair with Al Chapman.

Devastated upon learning that her mother was battling cancer, Chas was left overwhelmed and in need of support.

But while her husband failed to find the right words and do the right things for her, the scheming businessman played by Harry Potter actor Michael Wildman seemed to know how to handle it.

Sadly for Paddy and Kerry Wyatt – Al’s own partner – the pair embarked on an affair and have even been caught by Belle Dingle (played by Eden Taylor-Draper).

Despite this, the illicit lovers make a surprising decision regarding their romance – their affair will officially be back on next week. 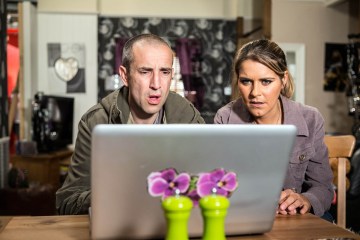 Coming up, Chas is ridden with guilt when Al approaches her in the eponymous village and hands her two burner phones as confirmation.

She’s later frustrated when her mother Faith (Sally Dexter) is in denial about dealing with the effects of her cancer.

As mentioned above, Chas only threw herself into Al’s arms as a way to cope with the Emmerdale veteran’s impending death.

But the pair were almost caught a first time by Kerry Wyatt who tracked Al down and found him at the hotel they were meeting in.

Following this close call, Chas kept her distance from Al, only wanting to focus on her mother Faith but that didn’t last long.

To make matters worse for their respective partners, it appears their connection has become more than physical as they grow even closer behind closed doors.

However, it could all be cut short as Emmerdale fans speculate Al could die in the show’s upcoming anniversary.

Everything you need to know about Emmerdale

The Yorkshire-based program will celebrate 50 years of longevity in October, 2022, with an explosive week.

Soap bosses have revealed a deadly storm will be making its way to the famous village and death is the cards for many residents – Al potentially being one of them.

Michael Wildman has recently ignited rumours he has quit the iconic ITV show which only makes fans question the fate of his character.

But could Chas and Al be exposed before the end of the year?

Or is this the calm before the storm?

Find out on ITV.