Lisa Wilkinson has weighed in on the massive backlash faced by a legendary Sydney nightclub, where revellers are now banned from staring at strangers, which she described as the ‘peacock dance of dating.’

Iconic venue Club 77 in the heart of Sydney’s Darlinghurst party strip has introduced hi-vis ‘staring police’ who will kick out revellers if they look longingly at a stranger across the dancefloor without prior ‘verbal consent’.

The club stresses interaction with strangers is encouraged but says engagement must now start with consent or will otherwise be considered as harassment and will result in being evicted from the club and police being called.

On Thursday night, Wilkinson and her fellow panelists on The Project slammed and poked fun at the rule which continues to spark controversy and divide opinion.

The panel believed it has blurred the lines between eye contact and staring.

‘I mean I haven’t dated for a very long time but isn’t sort of looking at somebody across the room (part of it)’ she said. 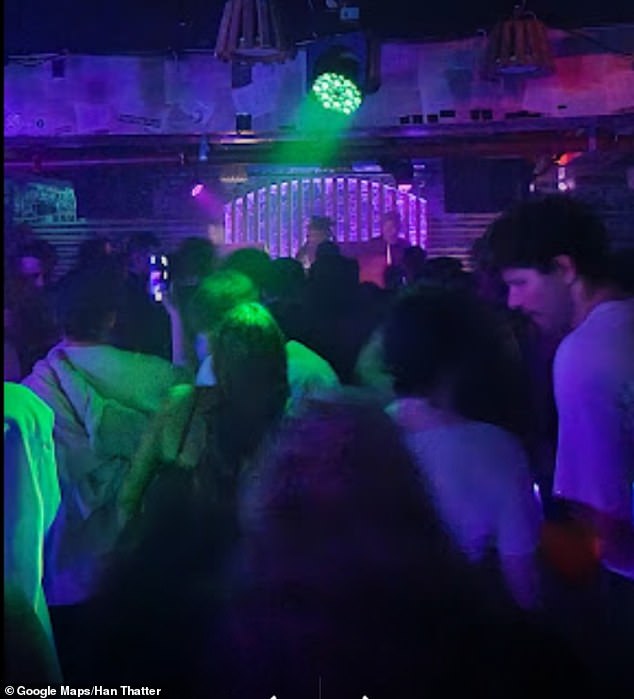 Co-host Hamish MacDonald said he wouldn’t have met his partner if they weren’t allowed to stare on the dance floor.

‘There you go, it’s part of the peacock dance you do when you’re dating,’ Wilkinson continued

‘Look, I think their heart is in the right place.’

Comedian Peter Helliar agreed but believes kicking out revellers for staring was over the top.

I do commend their effort for trying to create a safe space but I want to ask you a question – what is creepier, somebody staring at you or them asking for verbal consent to be staring at you?,’ he asked Wilkinson.

‘I think maybe they should have the high-vis there and if somebody is being stared at they could take that up with them and ask somebody to stop staring.

‘I think it’s stupid and ridiculous,’ he said. 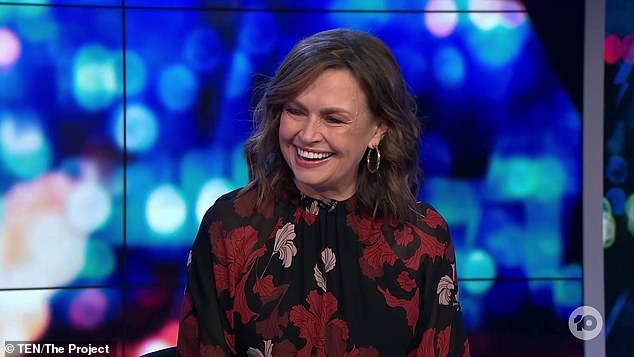 Price earlier suggested that he was a starer himself, prompting laughter from the panel.

‘I went to a dance where the teachers and nuns came up and if you were dancing too close to a girl they would wave a hand between you and said, ‘Leave room for God,’ he said.

What do yo think of Club 77’s new rules?

Club 77 owner Dane Gorrel has defended the rule in the wake of massive backlash.

‘We’re not a venue where you come to pick up,’ he said.

‘If you are just staring at someone for, you know, a considerable amount of time or making someone feel uncomfortable, unfortunately we do deem that as harassment and we will deal with that accordingly.’

Club 77 overhauled its safety and harassment policy earlier this month to make the venue a ‘safe space’ that promotes a strong culture of consent amid a crackdown against harassment.

The rules also apply when staring at a stranger from afar and not respecting the personal space of DJs.

Safety officers donning pink fluoro vests will roam the venue to deal with such complaints from anyone feeling ‘uncomfortable’ or receiving unwanted attention.

‘​If we receive reports of any behaviour that has made someone feel uncomfortable, the reported individual will be removed from the venue and the police will be called,’ the rules stipulate.

‘We adopt a policy of ‘always believe the report’ in cases of harassment and feeling unsafe.’

‘We do this to make everyone feel safe and to ensure our patrons are comfortable approaching staff if anything has made them uncomfortable or feel unsafe.’ 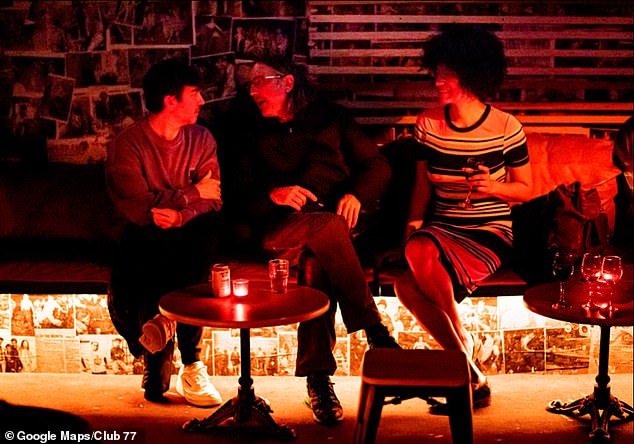 The venue, which recently celebrated its 25th birthday is ‘busier than ever’ after trading hours were extended until 4am seven days a week.

‘Unfortunately, this has also attracted some people who do not share our values and ethics when it comes to club culture, consent and harassment,’ Club 77 posted.

‘We’re thankful that incidents of harassment have been very rare, but in our eyes just one incident is too much.’

‘We also also have an obligation to educate new club-goers and help them understand what is considered unacceptable behavior inside the venue and on the dance floor.’

‘So extreme! Everyone look on the floor now! Omg where is the world going! Pathetic really,’ one woman commented.

One man wrote: ‘What a mob of ill informed, oversensitive do gooders, can see innocent people banned and or reported wrongly. Hence legal proceedings, seriously it’s not april 1st but the jokes on you Australia wide! Be hearing more no doubt, can’t stop laughing at your complete and utter stupidity.’ 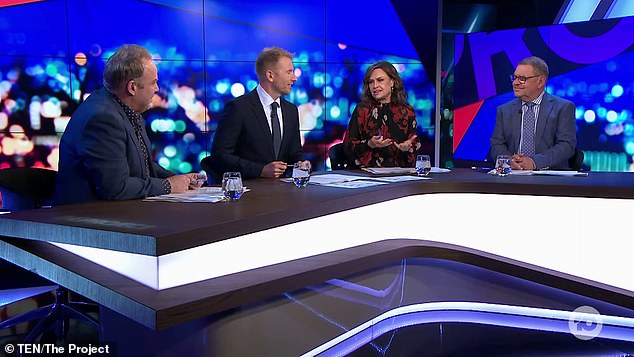 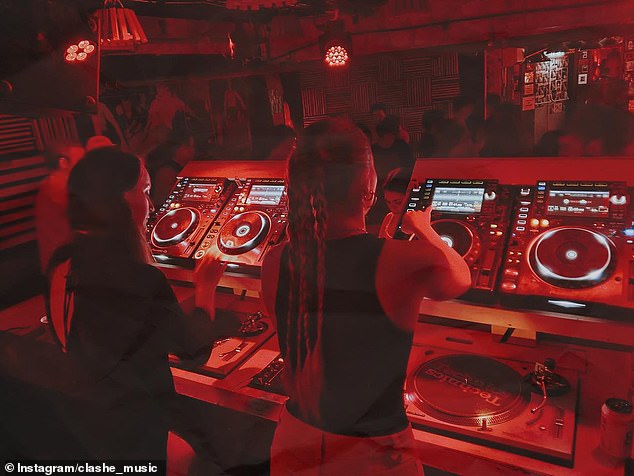 Revellers must also respect the personal space of DJs at the venue(pictured, DJs at Club 77) 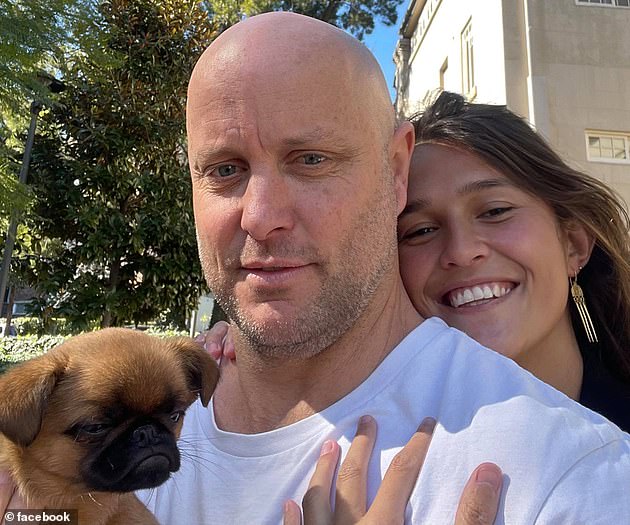 The rules have also divided dating and relationships experts.

‘If you can’t look across the room at someone to let them know you’re interested, it means you have to go up to them physically, invade their space, it is a more kind of forward approach,’ clinical psychotherapist Melissa Ferrari told the Daily Telegraph.

‘It is always a more lovely story, when it is a more organic in person story of looking at someone across the bar, that is a much nicer story than meeting someone online.’

‘With the pandemic people have changed, they’re more anxious and less trusting of others,’ she said.

‘There is so much stalking being reported, the club is possibly just trying to protect their patrons.’ 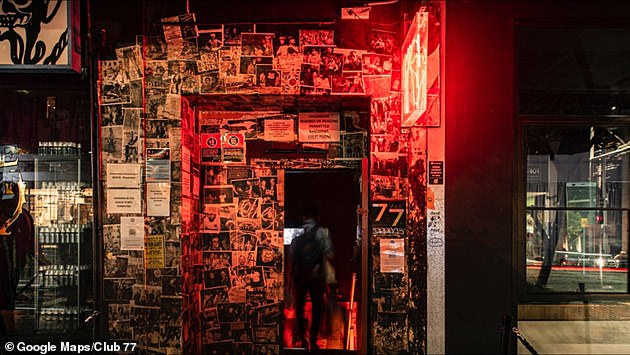