President Biden poked fun at Donald Trump’s attorneys’ claims that the former president had declassified all documents he brought to Mar-a-Lago.

”I’ve declassified everything in the world. I’m president. I can do it all.’C’mon declassify everything,’ Biden said as he boarded Air Force One to head to Wilmington, Del. for the weekend.

He refused to comment further on Friday’s release of the heavily redacted affidavit.

‘I’m not going to comment because I don’t know the details. I don’t want to know,’ he said.

The FBI carried away 27 boxes from Mar-a-Lago, including 11 sets of classified government records, some labeled ‘top secret’ during the Aug. 8 raid.

The Department of Justice released a heavily blacked-out version of the affidavit providing justification for the August FBI raid on Trump’s Mar-a-Lago property.

U.S. Magistrate Judge Bruce Reinhart, who approved the warrant that led to the Aug. 8 raid, ordered the unsealing of the affidavit by 12 p.m. Friday — despite the DOJ’s objections.

In a footnote, the affidavit notes that the law does not just prohibit the transfer of classified information, but also ‘the unlawful retention of ‘information related to the national defense.’ The footnote seems to suggest that it would still be illegal for Trump to take the documents even if he had declassified them. 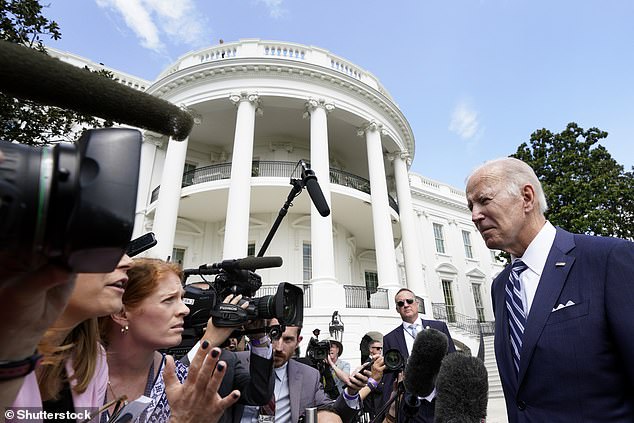 ”I’ve declassified everything in the world. I’m president. I can do it all.’C’mon declassify everything,’ Biden said as he boarded Air Force One to head to Wilmington, Del. for the weekend

President Biden, who declines to comment on the specifics of the unsealed Mar-a-Lago affidavit, mocks Donald Trump’s legal strategy:

“‘I’ve declassified everything in the world. I’m president. I can do it all.’ C’mon …” pic.twitter.com/iOEpf1dWKJ

John Solomon, who is representing Trump before the National Archives, said earlier this month that Trump had all documents declassified before he brought them to Mar-a-Lago.

‘As we can all relate to, everyone ends up having to bring home their work from time to time. American presidents are no different,’ Solomon read in a statement on Fox News on Aug. 14.

‘President Trump in order to prepare the work the next day often took documents including classified documents to the residence. He had a standing order that documents removed from the Oval Office and taken to the residence were deemed to be declassified the moment he removed them.

The three criminal laws the FBI listed in the warrant as the basis of its investigation did not relate to whether or not the documents were classified– the related to the Espionage Act, obstruction and another statute that criminalizes the theft or destruction of government documents.

The affidavit raised concerns about a trove of classified documents the the National Archives and Records Administration had retrieved from Mar-a-Lago in Florida in January.

The DOJ says in the document that 14 out of the 15 boxes retrieved in January had classified information, with a newly unsealed breakdown revealing the amount of high-level secret information that was kept in a basement storage room and other facilities at the president’s club. 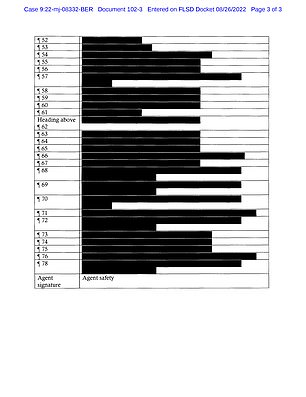 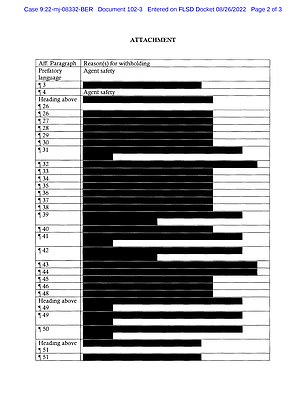 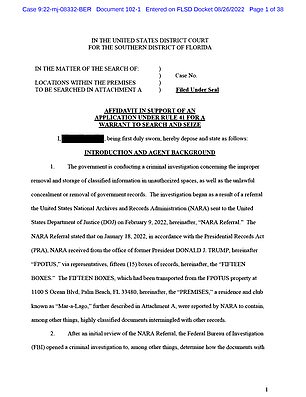 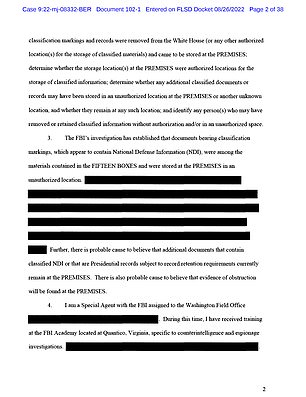 ‘In total, Trump had 184 classified documents, 67 confidential, 25 top secret and handwritten notes in boxes returned to the National Archives, according to the document that states the FBI had ‘probable cause to believe evidence of obstruction would be found’ at his Florida home.

Trump is under criminal investigation for the removal of the documents.

‘The government is conducting a criminal investigation concerning the improper removal and storage of classified information in unauthorized spaces, as well as the unlawful concealment or removal of government records,’ an unidentified FBI agent wrote on page one of the affidavit.

The FBI also conducted the search fearing that the release of classified documents could compromise ‘clandestine human sources’.

‘Based on my training and experience, I know that documents classified at these levels typically contain NDI,’ according to the signing agent’s affidavit, using the acronym for National Defense Information. ‘Several of the documents also contained what appears to be FPOTUS ‘s handwritten notes,’ the agent added.

The affidavit describes the classification markings that agents saw after a prolonged letter battle with Trump’s lawyers to gain access to the 15 boxes of material.

The  FBI said it had ‘probable cause to believe evidence of obstruction would be found’ at Mar-a-Lago, according to the affidavit.

Trump meanwhile has filed a separate civil case asking another judge to stop the FBI’s review of the documents until a special master is appointed to independently review them for materials that could be protected by executive privilege. 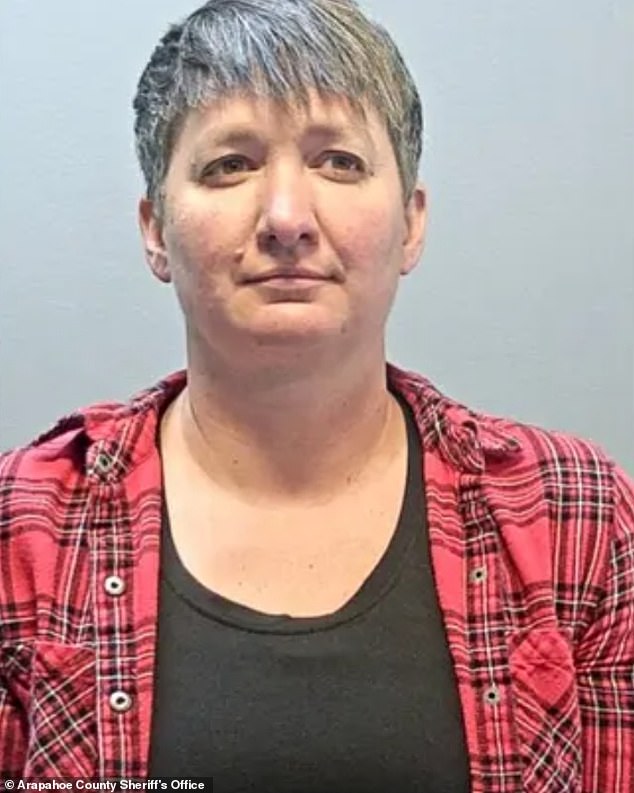