Into The Woods (Theatre Royal, Bath)

Gloating may be unseemly but Terry Gilliam has certainly earned the right to crow about his stunning new production of Stephen Sondheim’s fairy-tale musical.

Originally meant to run at London’s Old Vic last year, the production was cancelled after the politically correct Stasi who run the theatre found the Monty Python legend guilty of transphobic thought crimes (he’d recommended a controversial Netflix special by African-American comedian Dave Chappelle) and was insufficiently supportive of the #MeToo movement.

What a relief, therefore, to see that artistic merit can still triumph over small minds. Success is the sweetest revenge and for sheer spectacle, Gilliam’s production is a peach.

It’s a clockwork pageant with a printed frame around the stage and the show is presented as though in a Victorian toy theatre.

The production takes childlike delight in every aspect of James Lapine’s story, which weaves together a tapestry of fairy tales.

We get Jack And The Beanstalk (the giant hen that lays the golden egg has Made In China stamped on its bottom) and Cinderella, played by the always luminous Audrey Brisson, who sings like an angel. 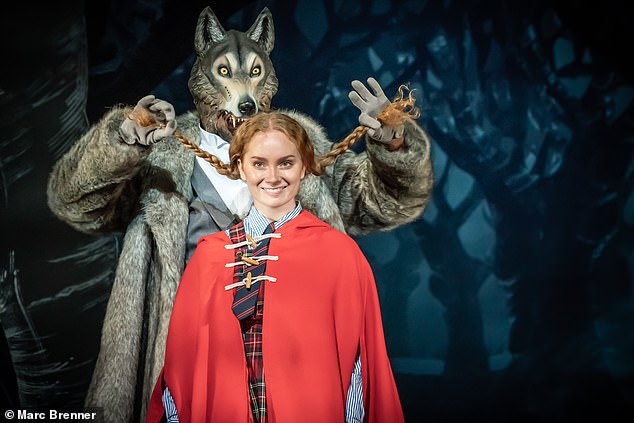 The production of Into The Woods takes childlike delight in every aspect of James Lapine’s story, which weaves together a tapestry of fairy tales. Pictured: Lauren Conroy with Nathanael Campbell in wolf’s clothing

Rapunzel (Maria Conneely) lives in a tower of silo-sized Heinz baked bean cans supervised by her short-fused witch of a mother (Nicola Hughes).

The visuals all but eclipse Sondheim’s music and lyrics, which are a mostly pleasing three-hour ramble through the arboreal setting of the title.

We are treated to marching tunes, suspense music and schmaltz, but the constant turnover of characters prevents us getting seriously involved with any individual.

The 90-minute first half is probably enough. But Sondheim never knowingly understays his welcome and in a second half of a single hour, we re-encounter the same set of characters, this time struggling to come to terms with their ‘happy every afters’.

Cinders’ Lothario Prince is having affairs (‘I’m charming, not sincere,’ he explains); and Rapunzel is experiencing mental health problems thanks to her mother’s controlling behaviour.

Even so, I wouldn’t want to miss the giant’s wife, who stomps on after the interval in the form of an enormous avenging doll.

All that fits on stage is the lacy hem of her dress and the massive pink shoes she uses to stamp on the residents of fairyland, whom she blames for killing her husband — before sitting, catastrophically, on their castle.

It’s all lent magical atmosphere, thanks to the deep, mysterious shadows cast by Mark Henderson’s lighting.

Nor could I ever tire of Julian Bleach, who turns the narrator into a Grim Reaper in tatty black weeds and top hat, armed with hourglass and scythe.

A supreme showman, he commands the audience with the slow creak of a single eyebrow.

Like the rest of the cast, Bleach is exquisitely choreographed by Gilliam’s co – director Leah Hausman, who ensures the action runs with the smooth gaiety of a circus carousel.

And at the end of the first half, the cast dance through the auditorium, holding hands like a festive paper chain.

Over the course of three hours (including an interval), Sondheim’s score does become a bit of a chore.

But few productions will ever make such light work of his sprawling musical canvas.

Sondheim disciples who are not crippled by their political correctness will flock to see it anyway, but I can declare it safe for the rest of us, too.

All’s well? Actually, our heroine is a stalker…

The programme for the Royal Shakespeare Company’s new production of All’s Well warns us that the work is considered ‘unloved’ and even ‘unlovable’.

It’s a dispiriting starting position for an audience, many of whom will be hoping to take pleasure in the performance.

In some ways, though, it’s a fair point. The French heroine, Helena, orphaned daughter of an apothecary, is besotted with nobleman Bertram — a youth with whom she has been raised as an adopted sister.

He finds her affection more than a little creepy and escapes to the royal court in Paris. She tracks him down and, after curing the king of a mystery illness, secures Bertram’s hand in a forced marriage.

The story is so far from modern protocols around matchmaking that Helena can only strike us as a stalker.

Blanche McIntyre’s production seizes on this, with a modern production comparing Helena’s infatuation to inappropriate fixations on social media today. 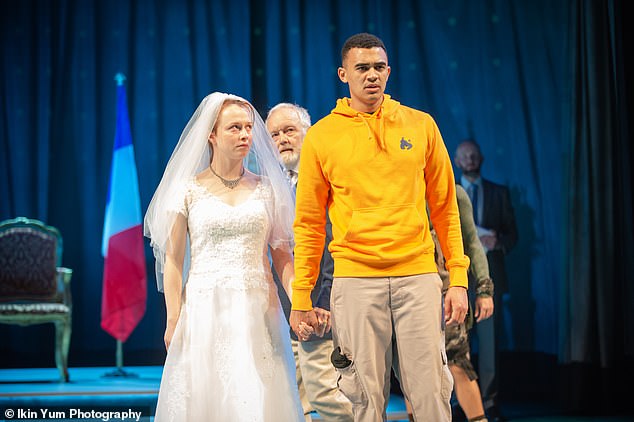 Infatuated: The story is so far from modern protocols around matchmaking that Helena can only strike us as a stalker. Pictured: Rosie Sheehy as Helena and the object of her affection, Benjamin Westerby

Sadly, this serves only to widen the gulf between the magical thinking of Shakespeare’s fairy tale and today’s online cattle markets.

Sheehy is persuasive as a bolshy, wilful redhead with a hot crush on Bertram, and she eventually prevails by sheer force of personality.

But McIntyre’s production shows little such faith in the play — especially in Benjamin Westerby’s Bertram, who is presented as an earnest playboy . . . which ought to be a contradiction in terms.

The only character who seems to be having any fun is Jamie Wilkes: a comic revelation as the soldier and braggart Parolles, played here as an American GI channelling Sylvester Stallone’s Rambo.

Weirdly, his American accent is ditched halfway through, before he is subjected to a needlessly cruel mock execution (played by McIntyre for its full horror). Nor could I make sense of a running gag about Parolles being a drummer and a drone operator.

At least Bruce Alexander’s King of France manages to carry his own erratic behaviour lightly and ties up a zany ending without batting an eyelid.

Otherwise, this is a show that succeeds only in confirming its suspicions of the play’s supposed flaws.

Driven into each other’s affections

Verdict: One for the road

It is overstating things to say the West End meets the West Country in Cirencester’s 200-seater Barn Theatre, a former Nissen hut on the edge of town, but there are first-class performances to be enjoyed in Simon Reade’s streamlined revival of Alfred Uhry’s Driving Miss Daisy.

Indeed, it returns this poignant play about the relationship between a testy white Jewish widow and her black chauffeur in segregated Southern America to its small-scale origins.

It premiered 35 years ago, off-Broadway, before making it big in 1987 in an Oscar-winning movie starring Jessica Tandy and Morgan Freeman. 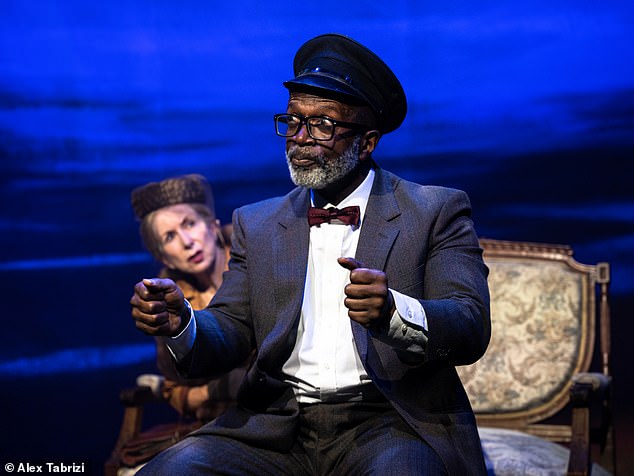 Here, an elegant sofa doubles as the motor car where Miss Daisy, having crashed her Oldsmobile, becomes a difficult back-seat driver.

She resents her loss of independence and, as a former schoolteacher who scrimped and saved, is worried about appearing grand.

Meanwhile, Hoke the driver perches on a packing case, steering an imaginary wheel.

Mensah Bediako’s wonderfully warm Hoke quietly endures the humiliations of this iniquitous society while never underestimating his worth. No wonder she melts.

The experience of age and frailty brings these richly drawn individuals closer, literally, like old vines. They share the sofa — and jokes.

In the final tender, touching scene, Daisy gracefully and gratefully allows Hoke to spoonfeed her.

A predictable journey, but a surprisingly subtle one.

The Trials is a net-zero entertainment set in a dystopian near future where juries of children have been formed to judge and condemn to death an entire generation of baby boomer ‘dinosaurs’ for trashing the planet.

Guilt indicators include having kids, flying too much and not being vegan.

Far from satire, the USP of this charade is the jury recruited from a vast pool of young people.

They are introduced in a deadly opening scene, laboriously enumerating their pronouns.

One is a nice kid whose parents are teachers, another won’t defend her corporate lawyer parents (who’ve already been bumped off), and there’s a resident cynic who’s more interested in vegan ice cream.

Not only is Dawn King’s play interest-neutral, it tramps around in circles recycling feeble arguments.

Natalie Abrahami’s production wisely avoids an interval lest we escape this onerous stretch of jury duty.

There are obvious echoes of William Goldings’ Lord Of The Flies, while the Nuremburg Trials provide moral and historical context — and similar levels of mirth. 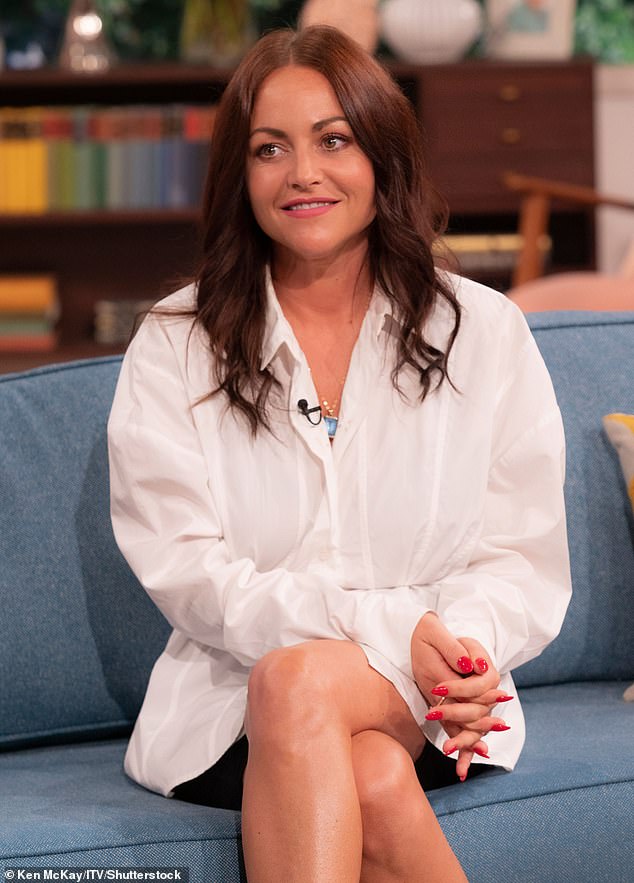